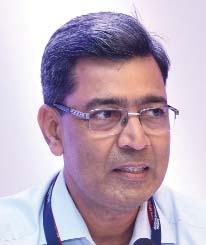 In late 2018, the Gujarat government decided not to allocate land for interstate transmission system-connected wind projects to be set up by central agencies. More recently, the wind energy segment in India hit a new low after the Andhra Pradesh government decided to renegotiate the existing power purchase agreements (PPAs). At the “Wind Power in India” conference organised by Renewable Watch, Bhanu Pratap Yadav, joint secretary, Ministry of New and Renewable Energy (MNRE), spoke about the challenges looming in the wind power segment. Excerpts…

The wind power segment in India is going through a tumultuous phase as a lot of restructuring keeps happening on the policy front. In the two and a half years that I have worked at the MNRE, I have witnessed the transition from the feed-in tariff regime to competitive bidding. Handling this has been the biggest challenge. Various other challenges have been dealt with as well.

The ministry had anticipated that once the country moved forward with capacity additions various challenges would emerge. Some of the key challenges that we have had to face relate to centre-state relations, transmission planning and land availability.

While the planning and execution for transmission infrastructure for renewable energy projects is more or less in shape, the political challenges in Gujarat and Andhra Pradesh are unprecedented. In Gujarat, over 5,000 MW of renewable energy projects were stuck due to land availability issues. After several rounds of meetings with the state government, these issues have been resolved to a certain level, and in the next two or three months, most of the pending applications will be cleared. In Andhra Pradesh, too, the MNRE has made several efforts to communicate with the state government. The court’s stay order on the state government’s decision to cancel the PPAs will help resolve the matter faster.

The ministry has been working to address the existing as well as future challenges. To this end, it is putting in place a quality control mechanism through the Revised List of Models and Manufacturers and addressing delays in obtaining no-objection certificates from the defence authorities. The hybrid power concept was adopted about one and a half years ago by the ministry. At the time, the ministry was quite optimistic about it. We thought that there will be no stand-alone solar or wind projects in the future. The bids, however, did not receive as good a response as was expected. But we are still keen to develop hybrid projects as these projects can help solve land, transmission and intermittency issues.

Being a price-sensitive market, India is not prepared for development in the offshore wind segment. The MNRE is trying to work out a viability gap funding mechanism to bring down tariffs. The aim is to bring the tariffs for offshore wind projects at par with those of onshore wind projects, the way it has happened globally. To this end, bids are likely to be floated by the end of the year and Tamil Nadu may be considered as the site for the second project.

Safety is another concern for us. The technical team of the ministry visits the sites where turbine damage takes place. We ensure that the original equipment manufacturers (OEMs) and operations and maintenance players take due diligence to avoid the recurrence of such catastrophic events.

The wind map is being finalised at a revised hub height of 120 metres and will be published in about a month. The overall wind power potential at this height will almost double. This will encourage developers to look at more areas for projects besides windy states. We are also considering repowering old wind turbines through the regulatory route and will initiate the process in a couple of states. Under this, wind turbines older than the benchmark year or with a lower capacity utilisation factor (CUF) than the benchmark CUF will have to be repowered.

On the manufacturing side, we have over 10 GW of capacity. Most of the OEMs now source a large amount of their content locally. This has been driven by pure commercials. Currently, 80 per cent of materials are sourced locally, which is likely to increase to 90 per cent.

On the issue of land availability, we are in talks with various renewable-rich states to identify large swathes of waste land and form a special purpose vehicle between the central and state governments for the development of renewable energy projects. Going forward, the annual capacity addition target stands at around 10 GW for the short and medium term.