Telangana, formed only five years ago, in June 2014, has already become a leader in the solar power space in India. Carved out of Andhra Pradesh, the state had a poor power supply situation at the time of its formation and suffered from frequent and prolonged power cuts. However, the political will of the state agencies and enabling policies have dramatically improved the power situation in the state. Through a combination of measures such as energy efficiency and solar power deployment, Telangana has succeeded in removing many of the shortcomings in its power sector. In this article, Renewable Watch assesses the power supply situation, renewable energy uptake and outlook for this sunny state…

Telangana’s total power consumption potential was around 6,500 MW at the time of its formation, but its total contracted power capacity was just 4,500 MW. Thus, the state had a huge power deficit especially during peak hours of the day. In fact, the industrial and agricultural sectors suffered a lot in those days. As per Ajay Mishra, special chief secretary, energy department, Telangana government, “The state had a two-day industrial holiday every week with no industry getting power supply during those two days in the entire state. The agricultural sector was also getting power supply for only five to six hours per day.” There were frequent power cuts in the entire state and continuous power supply was rare even in urban areas.

However, the state’s power supply situation has improved dramatically over the past few years, with Telangana reporting zero peak power deficit during 2018-19. The state had a total installed power capacity of 9,636.61 MW during 2014-15, which has increased to 15,855.92 MW as of June 2019. The frequency of power cuts has reduced, even in the agricultural sector. As per Mishra, “The power availability in the agricultural sector has increased from five-six hours to seven-nine hours, and this year it went up to 24 hours. Telangana has among the highest annual per capita energy consumption in the country, as per the latest statistics, with demand increasing every year.”

In terms of power generation, thermal power dominates the energy mix of the state. However, the share of solar power has increased, going up from 7.52 per cent in 2017-18 to 11.07 per cent in 2018-19. Thus, an increase of 56.9 per cent was recorded in terms of energy generation, in a span of just one year. Solar power is more widely available throughout the state than the location-specific hydropower and wind power, and has the added advantage of a shorter gestation period vis-a-vis other power sources. Thus, the state agencies are taking major steps to promote solar generation to address the gaps in Telangana’s power supply sector. 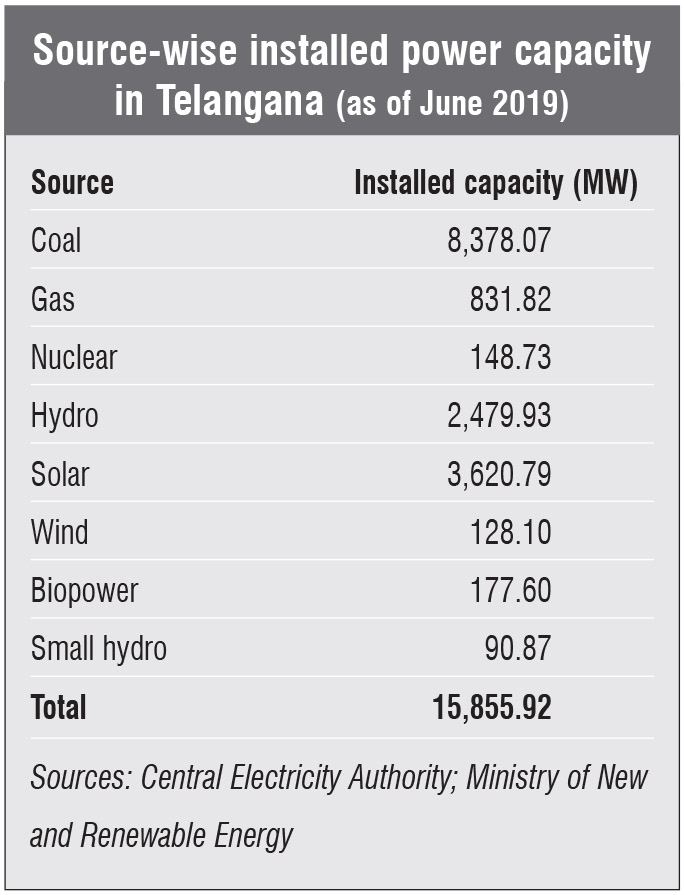 Telangana’s solar power development strategy is slightly different from that of other states. While other states have auctioned large capacities for solar power park development, Telangana has opted for a distributed solar power generation programme. As per Mishra, “Due to the difficulties faced in the implementation of the first solar park, the state agencies of Telangana decided not to attempt it a second time”. Instead, tenders were issued for solar power plants of capacities in the range of 50 MW to 200 MW to be set up in a distributed manner. In this manner, Telangana has already tendered about 3,500 MW of solar plants for private players through competitive bidding. Interestingly, about 1,543 MW of the total solar power capacity in Telangana is on account of projects ranging from 16 MW to 50 MW.

For making this model work, the state agencies initially carried out a detailed analysis of Telangana’s distribution as well as transmission systems. Regions with gaps in their power demand and supply were earmarked, and matched with areas with surplus transmission and distribution (T&D) capacity. Thus, the entire solar power development in the state was carried out in a planned and systematic manner so as to prevent any burden on Telangana’s T&D system. Since solar power was being generated and consumed at the same location, there was a significant reduction in the state’s T&D losses and the expenditure for augmenting the T&D infrastructure was avoided. This has assured power security. However, as per Mishra, “To avoid any transmission-related constraints in the future, Telangana has transmission infrastructure ready for upcoming capacities.” 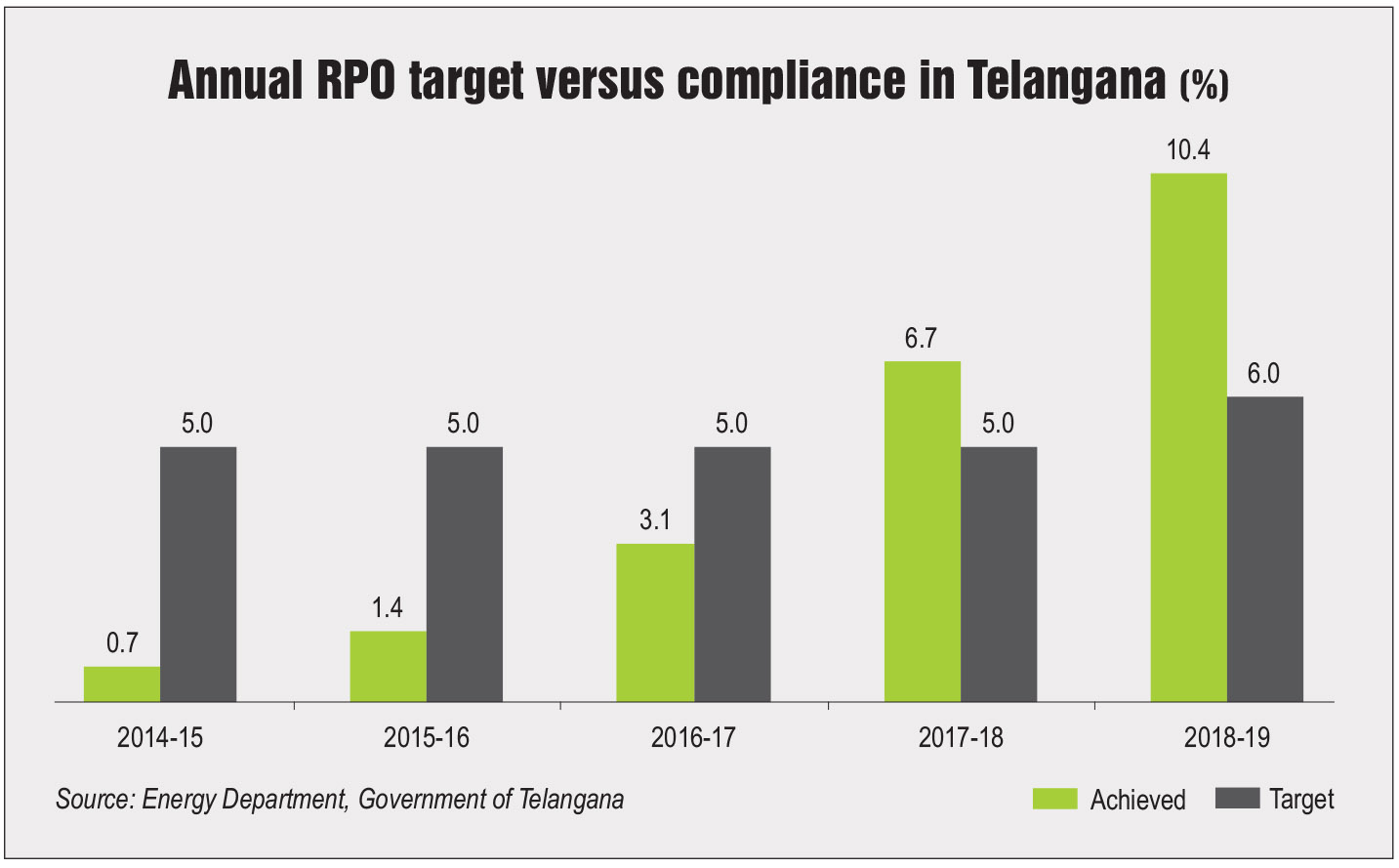 Most of the rooftop solar development in Telangana happened after 2016-17, post the introduction of net metering regulations in 2016. Since then, the state agencies have been undertaking a number of campaigns to promote rooftop solar through consumer awareness programmes such as radio campaigns and information booths at events, as well as through newspapers. The state also runs a consumer facilitation programme for promoting rooftop projects. For this, an online application process has been developed for securing connectivity. This programme helps in facilitating the process of feasibility, application, work completion, grid integration and subsidy receipt. Apart from that, state discoms, in coordination with Telangana State Renewable Energy Development Corporation (TREDSCO), have invited interested developers and empanelled qualifying parties to undertake the installation of residential rooftop solar systems, thereby enabling quality and timely maintenance support.

Telangana has not witnessed a lot of tendering activity or major policy developments in recent months. Its capacity installations in biomass and wind power have also remained low, compared to solar power. However, TSREDCO has been making efforts to encourage renewable energy uptake through various tenders and programmes. In June 2019, NTPC Limited gave investment approval for a 100 MW floating solar project at its Ramagundam Coal Power Station in Karimnagar, Telangana. Recently, TSREDCO also proposed to implement a 100 MW floating solar power plant for the existing lift irrigation scheme on a pilot basis on Annaram Barrage.

In March 2019, TSREDCO issued a tender for 31.12 MW of rooftop solar power plants under renewable energy service company (RESCO) mode. The solar projects will be installed on vacant building rooftops of pump houses, reservoirs, sewage and waste treatment plants, and office buildings of the Hyderabad Metropolitan Water Supply and Sewerage Board. All solar power plants will have net metering. In the same month, the Karimnagar Municipal Corporation signed an MoU with TSREDCO for the installation of 1.35 MW of solar rooftop projects on government buildings, under the central government’s Smart Cities Mission. The agency also entered into an MOU with Syndicate Bank for arranging loans for state government employees, for installing grid-connected solar rooftop systems.

In February 2019, TREDSCO accorded permission for a 19.8 MW municipal solid waste power project. About 50 per cent of the works have been completed, and the project is expected to be commissioned by December 2019. In addition, the Telangana State Generation Corporation is considering implementing 50 MW of ground-mounted solar projects for selling power to discoms, while 300 MW of solar projects are being considered for captive power consumption by Singareni Collieries Company Limited.

As per Mishra, “Telangana is a small state with a small population and already has 3,400 MW of solar power capacity installed. Hence, it should move slowly and steadily in the future in terms of capacity addition as prices are expected to drop further”. To leverage the falling prices, the state has decided to procure power through Solar Energy Corporation of India (SECI) Limited going forward, instead of auctions. Through SECI projects, solar power can be procured at much lower tariffs. However, the state is open to exploring possibilities of even lower tariffs through an auction, as low cost power is in the greater interest of the state.

Telangana is one of the few states that have been successful in achieving their renewable purchase obligation (RPO) targets for 2017-18 and 2018-19. In fact, it achieved an RPO of 10.4 per cent against the state regulator’s target of 6 per cent during 2018-19 on the back of progressive solar adoption policies and transparent processes. Telangana has set a target to commission 5 GW of renewable energy by 2021-22. Of this, about 4 GW has already been commissioned, that too, in a short span of time, despite the small size of the state and the poor condition of its power sector at the time of inception. The state agencies are planning to procure significant solar power through ground mounted and rooftop systems in the coming months. The state is also promoting bioenergy and floating solar. Thus, the outlook is quite positive for this new southern state, which looks all set to achieve its targets with the right policies and the required transmission infrastructure already in place.