It is estimated that by 2050 over 1.8 million tonnes of solar PV waste will be generated. Reportedly, solar panels create 300 times more waste per kWh than nuclear plants. This is a grave issue considering that the carbon footprint of an average solar PV panel is 72 grams per kWh. Moreover, India is underprepared for the recycling of solar panels. At the post-production stage, waste collection is handled by an unorganised sector, and the processes are often not ecologically sound. Furthermore, whatever is not retrievable from the modules is dumped, putting the environment and human health at risk.

Unlike the European Union, Asian countries such as Japan, China and India lack a national law or regulation. In India, there is no clarity on the management of solar panel waste. It has not yet been decided whether to classify solar panel waste as hazardous waste, e-waste or general waste. “A general viewpoint is that it cannot definitely be classified under e-waste as these are not electronic devices,” shares A.K. Tripathy, director general, National Institute of Solar Energy (NISE).

A positive aspect of this renewable energy resource is that most of the materials that are used in a solar panel, such as glass, backsheets, plastic, junction boxes and aluminium frames, can be recycled albeit through a cumbersome process. “The major components of a solar module are solar cells, which are exposed to many chemicals and therefore need to go through segregation for the extraction of silicon before recycling,” shares Tripathy.

While a few Indian companies have set their sustainability goals as per their corporate guidelines, many ignore the sustainability aspect of the business owing to financial constraints. It is fair to say that small-term and long-term asset holders will have different spending patterns for recycling of solar panels. The developers are already under pressure as they are operating in a low-tariff scenario. Further, some developers enter the market on a short-term basis, primarily to monetise their assets.

On a lighter note, Tripathy says that the standards are in place in India but everyone is trained to flout the rules. “Despite having standards in place things will not improve unless the industry players take a conscious decision to put value on business ethics,” he adds. Sujoy Ghosh, vice-president, India and the Middle East, First Solar, says that unless regulations and standards are enforced, it is hard to drive voluntary behaviour from independent power producers operating in an environment of reverse bidding.

What can be done?

In international markets, the concept of extended producer responsibility (EPR) is followed for the management of solar waste, where the producer or the manufacturer is responsible for the collection and processing of waste after the completion of the product lifecycle. “Switzerland has initiated the setting up of producer organisations which are responsible for recycling after the completion of the product lifecycle. Collective effort and easier enforcement are its two benefits,” shares Ruchin Gupta, director, Ministry of New and Renewable Energy (MNRE).

In the Indian context, where 85-90 per cent of the market is import based, it is difficult for the government to enforce certain obligations, statutory regulations and EPR. In view of this, the MNRE has come out with an approved list of models and manufacturers to ensure reliability of solar projects. “The order mandates that only the manufacturers and their respective listed models will be allowed for government projects. So, 95 per cent of the projects that we install post-March 2020 will have installations from manufacturers enlisted by the MNRE,” says Gupta. 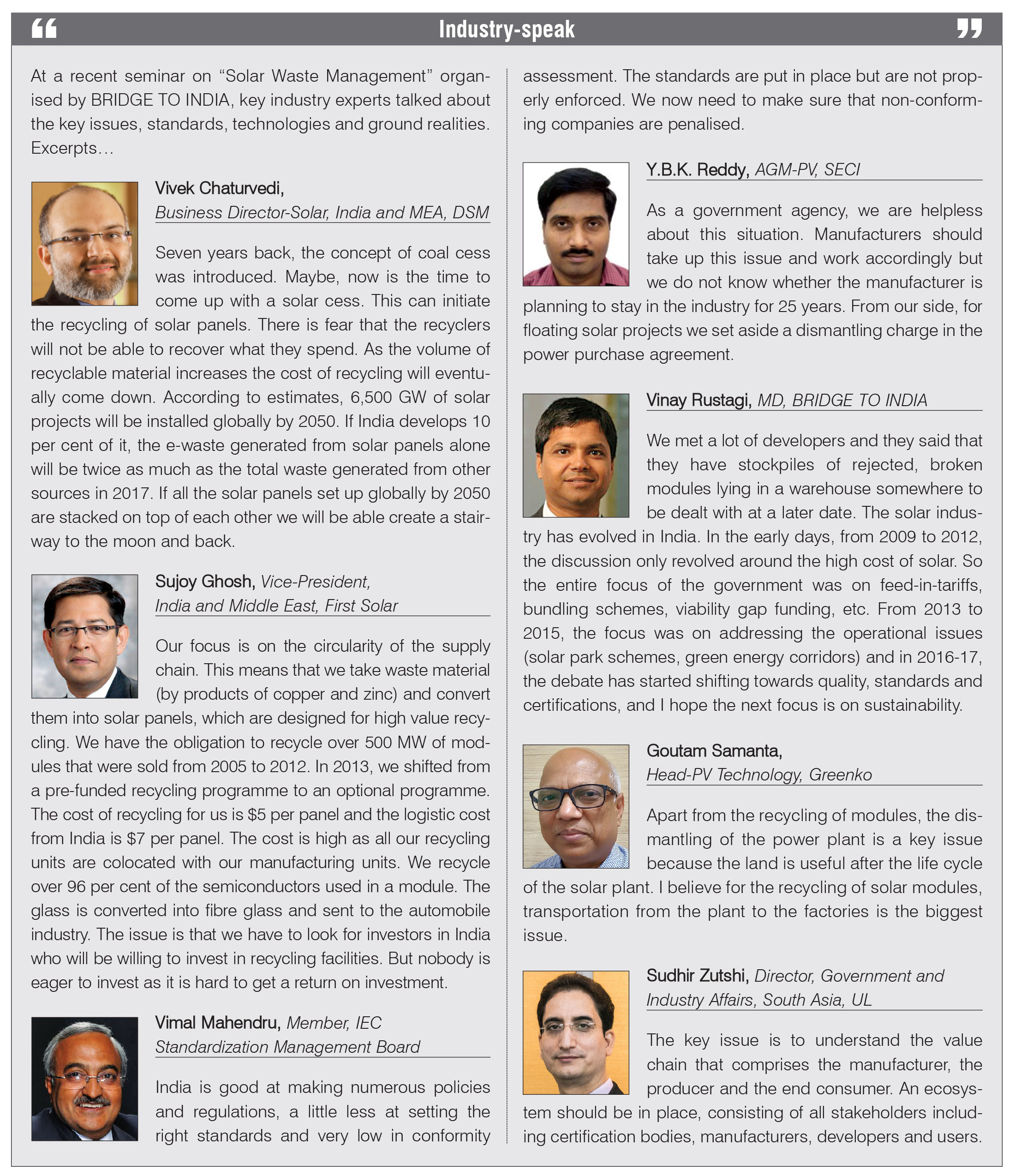 More testing labs need to come up in the country to ensure that sustainable material is used in the modules in the first place. This will nip the issue in the bud to a certain extent. For this to be successful, manufacturers should start spending more thought and money on the sustainability of the business. This will prove to be helpful when the regulators start penalising the lax behaviour of both the manufacturers and developers. Manufacturers can also make new solar cells of lower efficiency with recycled materials. However, this may not be accepted by the offtakers of energy.

NISE is already working with the Central Glass & Ceramics Research Institute and the Indian Institute of Science, Bangalore for the recycling of solar systems. According to Tripathy, “Over the next four to five years, the industry can establish a system in which waste can be properly recycled.”

There is a need to ensure that owners and developers take more initiatives for handling solar waste. To this end, a mechanism could be developed where they are not given funding for projects that do not have operations and maintenance contracts for the period after the life cycle of the solar plant. This solution could work in a market where developers are getting more funds from international organisations.

There are some start-ups that are taking a leap of faith by focusing on dismantling of solar plants and recycling of solar modules. To support them, policymakers should introduce recycling solutions and business models.

Green hydrogen has become a critical area of interest in India. It is being seen as a game changer in decarbonising sectors where hydrogen can be used. There are several applications of hydrogen across sectors, […]

The pace of development in the green hydrogen and green ammonia segment in India over the past few years has been impressive. The government has played a proactive role by releasing the first phase of […]