Andaman & Nicobar, an archipelago in the Bay of Bengal, is made up of 572 islands, of which only 37 are inhabited. These islands are scattered over a distance of more than 750 km, with their northern tip near Myanmar and the southern tip towards Indonesia. The capital, Port Blair, is located 1,200 km from the Indian mainland. Hence, connecting these islands to the national power grid is not a feasible option. The geographical and topographical constraints of the region, including separation by sea over great distances, make the construction of a single power grid for the islands a challenge. Their entire power requirement is therefore met by stand-alone power systems. Each island has independent generation, transmission and distribution systems.

Power generation in Andaman & Nicobar began in the 1920s. Small direct current diesel generators of just 100 kW were set up at the Ross Island in 1926 and then at Port Blair in 1929. Alternating current power supply came to these islands only in 1951, when two steam turbine generating sets of 550 kW each were set up in the Chatham Island. Since then, the Andaman & Nicobar Islands have come a long way in terms of installed power generation capacity, largely due to their increasing prominence as a major tourist destination. Out of the 37 inhabited islands in Andaman & Nicobar, 19 have been electrified while the remaining islands depend on captive power plants set up for the armed forces, the police, lighthouses and the Forest Department, as per the Ministry of Power statistics.

The islands have around 53 power houses, which are responsible for the entire power generation in the region. The total installed and operational power capacity of Andaman & Nicobar stands at 51.86 MW as of November 2018, of which 40.05 MW is based on diesel generators while the remaining comes from renewable sources of energy. The actual installed capacity of diesel generators is about 90 MW. However, more than half of these systems have become obsolete, leaving only 40.05 MW of effective installed capacity. Andaman & Nicobar has a 5.25 MW small-hydro project, functional since 2001, on the Kalpong river. Apart from this, the islands have a 5 MW solar power plant, which was set up by NTPC in 2013 at Port Blair, and a few rooftop solar plants.

The majority of the population on the islands has access to electricity, except for a few remote and inaccessible households in the forest areas. In recent years, several hotels and resorts have mushroomed in the region due to the rise in tourism. To cater to the increasing power demand, the electricity generation has been increased from 182.85 MUs in 2015-16 to 258.79 MUs in 2017-18, a growth of 41 per cent in a span of only two years. Since this trend is likely to continue, the Andaman & Nicobar authorities are planning significant capacity additions to meet the rising power demand in future.

To this end, in October 2018, the central government directed NTPC to set up a 50 MW LNG-based power plant in Port Blair. This floating storage re-gasification unit will meet the baseload power demand in the Andamans and also help the Electricity Department reduce the region’s dependence on diesel. The major challenges associated with diesel-based power generation are the cumbersome process of transporting diesel over large distances and the high operating costs. The Andaman & Nicobar Islands are heavily dependent on government subsidies for the deployment of diesel generators.

To address the issue of high power generation costs and become self-reliant in power generation, the Electricity Department of Andaman & Nicobar is planning to set up a significant solar power capacity. Distributed solar systems, both ground-mounted and rooftop based, are an ideal power generating source for this island outpost with no grid connectivity. These systems have gained prominence due to their low maintenance requirements as well as the limited feasible potential of other renewable energy sources like hydro power and wind power. The only concern regarding the deployment of solar PV is the intermittency in solar generation due to heavy rainfall or a cloud cover. However, this is being addressed with the integration of energy storage systems.

To improve energy security in islands, the Ministry of New and Renewable Energy (MNRE) launched a programme in 2016-17 for increased renewable energy integration in islands. In April 2016, the MNRE approved the implementation of 40 MW of distributed grid-connected solar PV capacity in the Andaman & Nicobar and Lakshadweep islands with an estimated central financial assistance (CFA) of Rs 1.92 billion. In November 2018, the MNRE revised the capacity from 40 MW to 52 MW and extended the implementation timeline for these projects from 2015-16 to 2017-18, which was further extended to 2018-19 in May 2018 and then to 2019-20. These solar projects are being implemented on a build-own-operate basis with the MNRE expected to provide 40 per cent of the project cost as CFA.

As per recent MNRE statistics, four organisations are implementing solar power plants under this scheme – Solar Energy Corporation of India (SECI), Rajasthan Electronics and Instruments Limited (REIL), NLC India Limited (NLCIL) and NTPC. SECI has already implemented about 1 MW of rooftop solar PV projects in Port Blair on government buildings, while the rest of the projects are under implementation or at the bidding stage.

Under Phase-III of the MNRE’s off-grid and decentralised solar applications programme, a CFA of 90 per cent of the benchmark cost or tender cost will be provided for the installation of solar street lights and individual solar power plants of up to 25 kW in the Andaman & Nicobar islands, Jammu & Kashmir, Himachal Pradesh, Uttarakhand, the north-eastern states and Lakshadweep. For other states, the CFA is 30 per cent. 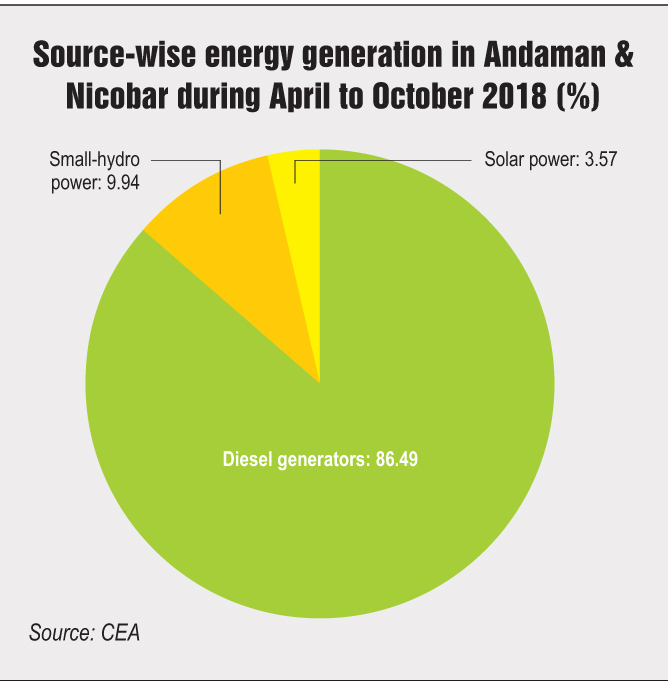 In September 2017, REIL issued a tender for two solar PV projects of 1 MW each with battery energy storage system (BESS) at Havelock and Neil. In October 2017, NLCIL tendered two 10 MW grid-interactive solar PV projects with 28 MWh BESS in Attam Pahad and Dolly Gunj, south Andaman, under the aforementioned programme.  Mahindra Susten emerged as the lowest bidder in this auction. However, this tender was cancelled by NLCIL probably due to the high cost of energy storage.

NLCIL issued a similar tender in February 2018 with a lower BESS capacity. This tender was also for two solar PV projects of 10 MW each with 8 MW of BESS to be developed at Attam Pahad and Dolly Gunj. Mahindra Susten emerged as the lowest bidder in this auction as well. However, in October 2018, NLCIL issued a letter of award to Larsen & Toubro Limited, for a contract worth Rs 1.32 billion to implement 20 MW of solar PV capacity with BESS in Andaman & Nicobar.

Like NLCIL, NTPC is implementing two solar projects aggregating 25 MW on the islands. An 8 MW solar PV plant with BESS will be set up in Chidiyatapu and the remaining 17 MW of solar PV capacity with BESS will be installed in Manglutan in south Andaman. The tenders for both these projects were first issued in 2017, and the projects were retendered in early 2018 with slightly different capacities. The bid due date for the Maglutan project was then extended to September 27, 2018, while for the Chidiyatapu project it was extended to October 11, 2018.

In April 2018, the Joint Electricity Regulatory Commission for the state of Goa and union territories of Andaman & Nicobar, Lakshadweep, Dadra & Nagar Haveli, Daman & Diu, Puducherry, and Chandigarh issued regulations for intra-state transmission and distribution open access for 2018-19. Under these regulations, all consumers whose maximum power demand at any time exceeds 1 MVA are eligible for open access. Also, any generator or consumer with a generation

capacity or load of 4 MW and above is eligible for intra-state transmission system connectivity under open access. In addition, all generating stations, including captive power projects with an installed capacity of less than 4 MW, are eligible to obtain connectivity to the distribution system.

In November 2017, the islands joined the Ujwal Discom Assurance Yojana. Under the scheme, the region was expected to derive a net benefit of Rs 180 million on account of cheaper funds for capex, reduction in aggregate technical and commercial losses and adoption of energy efficiency practices, aimed at improving the financial health of the Electricity Department of Andaman & Nicobar. 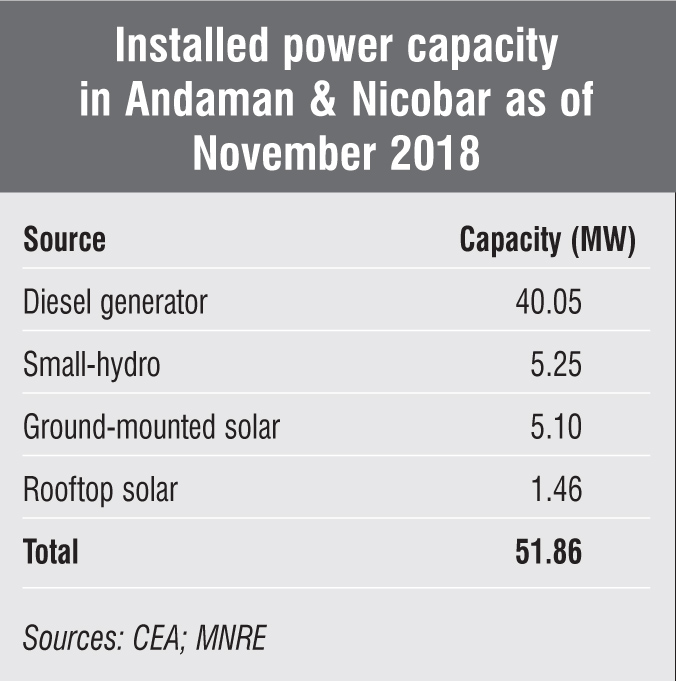 It can be concluded that significant progress has been made in Andaman & Nicobar to migrate from diesel-based power to renewable energy. This is being done despite innovation and implementation constraints presented by the geographical conditions prevailing in the region. Apart from large solar projects with BESS, the MNRE is planning to set up the first solar village in the islands through a corporate social responsibility fund. Through solar villages, the government will promote solar cooking to empower women and reduce pollution, and also significantly reduce the government money spent on subsidies.

The efforts of the authorities were highlighted by Admiral (Retd.) Devendra Kumar Joshi, lieutenant governor of Andaman & Nicobar, at the 2nd Global RE-Invest held in October 2018. He mentioned its plans to assess solar-wind hybrid solutions in the region and formulate a policy to encourage consumers to become prosumers. He remarked that transitioning to renewable energy remains the key priority for the administration. This was re-affirmed at a recent industry event, when Raj Kumar Singh, minister of state (independent charge) for power and new and renewable energy, highlighted the country’s aim to generate 100 per cent renewable energy in Andaman & Nicobar.