Honduras, with a per capita GDP of $2,480 in 2017, is the second poorest country in Central America and the third poorest in Latin America, ahead of only Haiti and Nicaragua. The country, however, has ample natural resources to achieve energy self-sufficiency. It has significant solar energy potential owing to its geographic location, as well as an estimated hydroelectric potential of 5,000 MW.

Given this, Honduras is looking to promote renewable energy generation to achieve energy self-sufficiency, reduce the cost of power and improve the rate of electrification. The country has set a goal to generate 60 per cent of its electricity through renewables by 2022 and further increase this to 80 per cent by 2034. The recent initiatives by the government to attract private investment in clean energy projects have resulted in the country surpassing its 2022 renewable energy target in 2017, recording 5,435 GWh of renewable energy generation.

While the power generation segment has witnessed private participation through the development of renewable energy projects, transmission and distribution (T&D) remains in the hands of the debt-ridden state-owned vertically integrated utility, Empresa Nacional de Energía Eléctrica (ENEE). The company has been struggling with a financial deficit for several years. This is largely attributable to the high thermal generation costs, which have to be absorbed by ENEE as these cannot be passed on to the end consumer. In addition, ENEE’s organisational structure is obsolete and needs to be urgently changed to allow for a more flexible administration, better oriented to technical activities.

Considering this, in 2014, the government announced the Electricity Industry Law, a legislation aimed at further liberalising the country’s energy sector. The law envisaged the splitting of ENEE into three separate entities – one each for electricity generation, transmission and operation of the national grid, and distribution. The unbundling was to be completed by July 1, 2015; however, more than three years past the deadline, the process is still under way. According to the latest information available, ENEE staff will also be divided among the three new firms so that they can begin work under the new organisations from early 2019.

The country’s generation capacity has historically been dependent on thermal and hydroelectric projects. This makes the generation capacity vulnerable to high and erratic international oil prices, and natural disasters. In the early 1990s, the electricity sector in Honduras experienced a severe financial crisis when tariffs were not adjusted to cover the debt service of the El Cajón hydroelectric project commissioned in the mid-1980s, and ENEE’s performance was poor. (The utility recorded electricity losses of about 28 per cent, and suffered from overstaffing and poor maintenance of thermal plants). The financial crisis led to the energy emergency of 1993, when a severe drought coincided with a lack of generation reserve capacity. There was an urgent need to mobilise private financing to expand generation capacity and improve ENEE’s performance.

To resolve the energy crisis, the government adopted the Electricity Act, Decree Nos. 158-94. The electricity law included establishing a competitive power market (vertical unbundling, freedom of entry to all sector activities, open access to transmission and distribution networks, and freedom of choice for large users); separation of the roles of policymaking, regulation and provision of electricity services; application of cost recovery tariffs and targeted subsidies; and private provision of electricity services.

This gave a boost to private investment in power generation. About 98 per cent of the operational fossil fuel plants were commissioned after this reform, and were privately owned. The major developments in the renewable energy segment also came from private players. As of 2017, about 79 per cent of the generation capacity of 2,571 MW was in the hands of the private sector with ENEE controlling the remaining capacity.

However, the new model failed to provide an impetus to other sectors, mainly due to the monopoly of ENEE over power T&D, a lack of political and technical support to conduct energy planning and policymaking, and rising oil prices. This resulted in an escalation in energy losses, a decline in the financial strength of ENEE and underinvestment in the electricity sector. 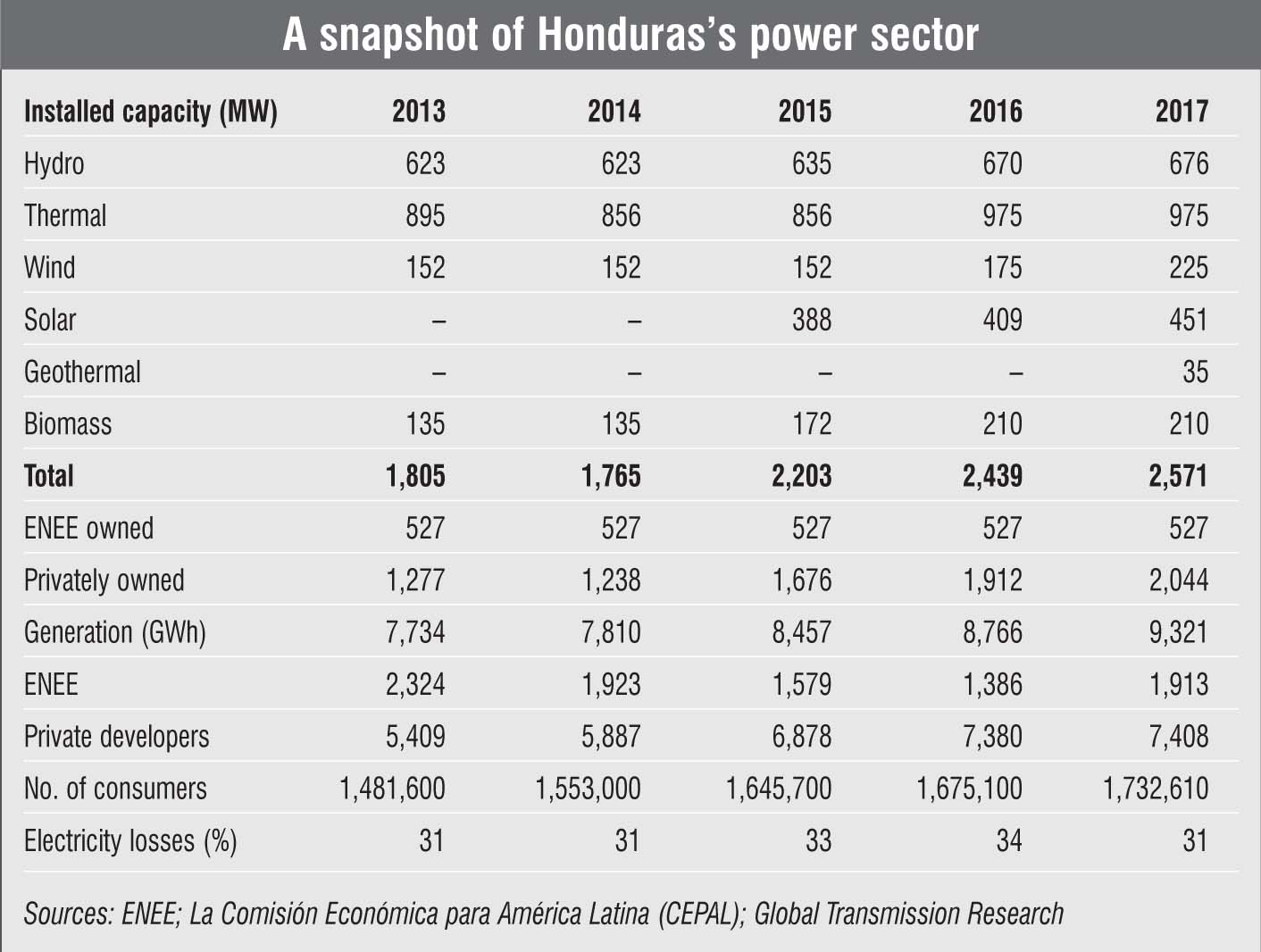 ENEE’s weak financials have been a key cause of the power sector’s poor performance, as it impacts the quality of service and ability to make investments in improving infrastructure. ENEE has been facing mounting debt. As of April 2018, the company had a public debt of HNL 42,027 million, 476 per cent higher than the HNL 8,836 million in 2010. This is on account of its raising internal and external debt for executing works and making payments to suppliers, mainly private generators. Further, non-payment of electricity charges by local and national authorities has reduced its ability to repay its debt.

To help ENEE improve its performance and, in turn, that of the electricity sector, the Electricity Industry Law was passed in 2014 to unbundle ENEE into three different entities. Once this has been effected, the companies will work under the umbrella of a holding company. As a result, the status of ENEE will change from a state-owned company to a corporation, although this does not necessarily mean privatisation of the company.

The holding company plans to invest $459.1 million in power generation and transmission during the period 2019 to 2021. Of this, $237 million will be directed towards the improvement and expansion of its transmission division, including the construction of new substations in Tocoa, Arenal, Yoro, Palmerola, Lean and San Francisco de La Paz, and the expansion and upgradation of its existing power substations.

The electricity law will also end the single-buyer model and let the newly unbundled publicly owned generation company compete with private generators for thermal and wind power projects in an open market. This will allow large energy consumers to buy electricity directly from the generators, thereby helping reduce the electricity cost in the country and providing attractive investment opportunities for power generators, especially in the field of renewables. For selling power directly to large consumers over ENEE’s installed network, the generators will have to pay a fee.

In 2015, Honduras establish the Comisión Reguladora de Energía as the energy sector regulator. In August 2017, a presidential decree was passed to set up Secretaría de Estado en el Despacho de Energía, under the Ministry of Economy, to develop energy sector policies and strategies. Prior to this, the Ministry of Natural Resources, Environment and Mines (MiAmbiente) was performing this role. 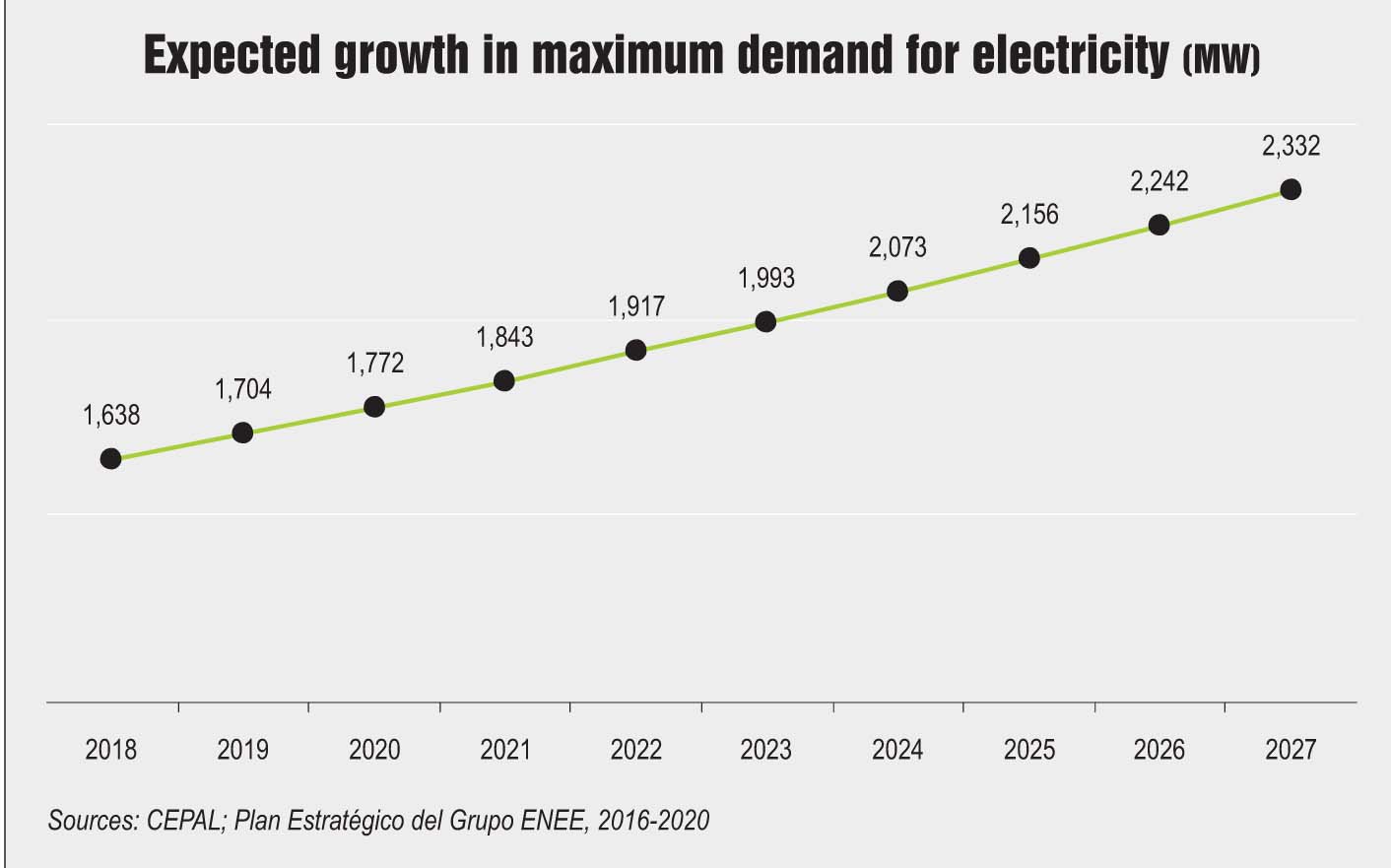 According to the International Renewable Energy Agency, $3,200 million is likely to be invested for developing approximately 815 MW of renewable energy projects in the country during the period 2019 to 2022. To support this upcoming capacity, ENEE plans to add 190 km of transmission lines and 255 MVA of transformer capacity during the period 2018 to 2020. Some of the upcoming projects are the Lean-La Cumbre line, the Lean substation, the Amarateca-Limones-Juticalpa line, the Telica-San Francisco De La Paz line, the Ocotillo substation and the Tocoa substation.

To support these developments, ENEE is seeking multilateral funding. In September 2018, the Inter American Development Bank (IaDB) approved a $150 million loan to improve the service quality of Honduras’s National Transmission System (NTS). The loan will be utilised to strengthen the NTS by financing ENEE’s priority projects. It will also boost the utility’s interconnectivity with the regional electricity market  to promote the use of the electricity system of the Central American regional power grid, Sistema de Interconexion Electrica de los Paises America Central or SIEPAC; strengthen ENEE’s financial sustainability and institutional capability; enhance transmission quality by improving service reliability; and increase renewable power transmission to the NTS. The programme is in line with the Honduras Country Strategy for the period 2015 to 2018, which is aimed at improving service quality and efficiency, as well as diversifying the generation matrix and enhancing user access to the energy system.

In addition, the construction of a second circuit of SIEPAC is under consideration. In September 2018, Empresa Propietaria de la Red SA (EPR) sought financing from IaDB for this purpose. (EPR is a public-private consortium created to build and operate SIEPAC, linking the power grids of Panama, Costa Rica, Honduras, Nicaragua, El Salvador, and Guatemala.) The 300 MW second circuit is estimated to entail an investment of $370 million, of which EPR is seeking $225 million as a loan from IaDB. 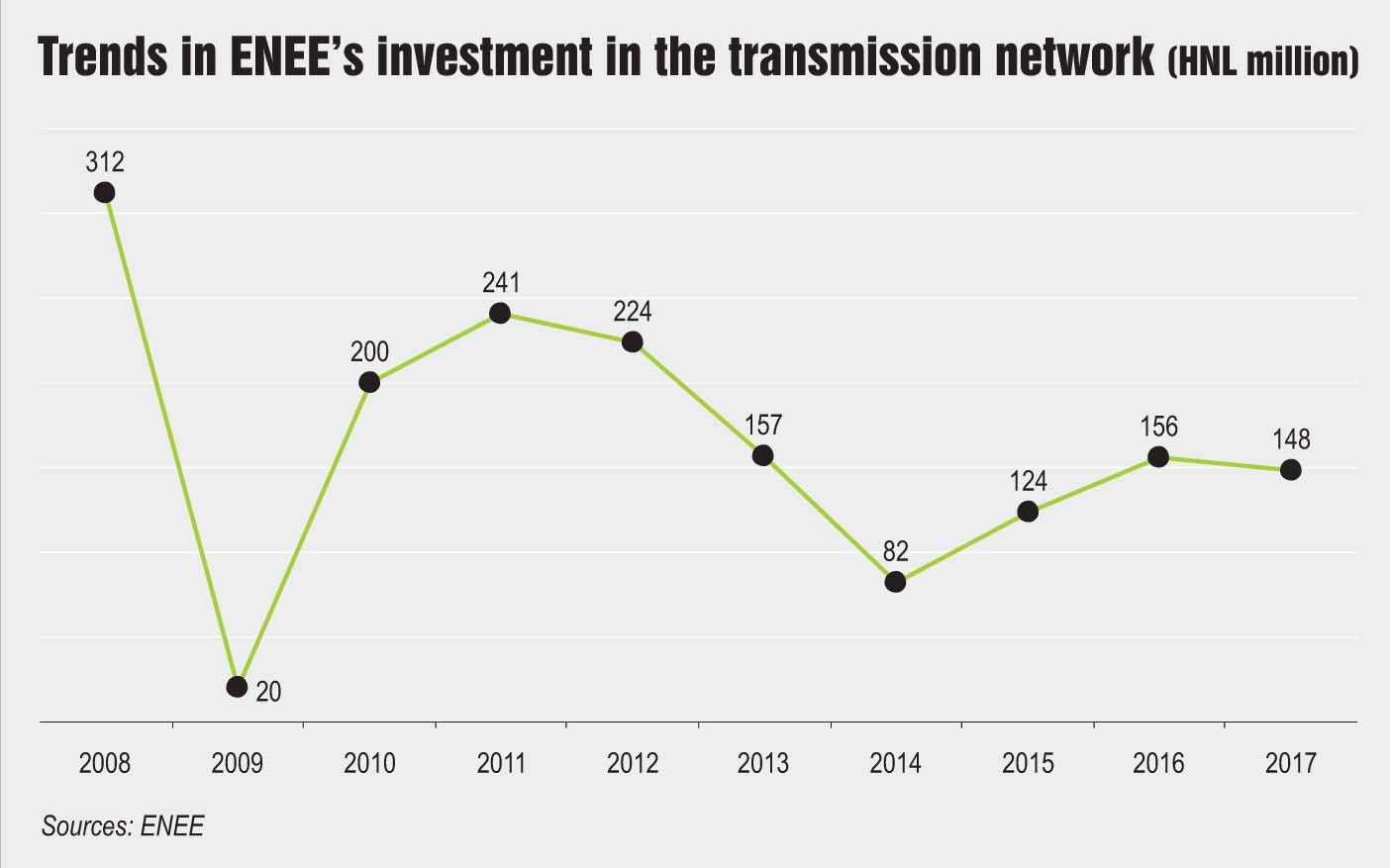 The energy reforms instituted by Honduras are providing significant opportunities in the renewable energy segment. The unbundling of ENEE will further boost investment in the T&D segment by improving the structural, functional and financial parameters of the company. A limited and ageing T&D network as well as a low electrification rate offer huge investment opportunities in the country’s power network.

Meanwhile, the intermittent nature of renewable energy generation requires the grid to be modernised. ENEE needs a comprehensive plan along with immediate action to restore its financial position, including revision of electricity tariffs and faster reduction of non-technical electricity losses to meet the growing requirements of the T&D network. Further, the country should consider attracting private investment in the T&D segment to help establish a strong and advanced power supply network.