While utility-scale grid-connected renewable energy hybrid projects are a recent phenomenon, small-scale decentralised hybrids have been there for a long time. WiSh (Wind-Solar Hybrid) Energy Solutions, a 100 per cent subsidiary of the Enzen Group, is one of the companies working in this space. It provides decentralised hybrid solutions in the form of micro wind turbines, which differentiates it from others in the market.

The company’s key offerings are its line of patented micro wind turbines, available in sizes ranging from 400 W to 4.5 kW, as well as its wind and hybrid charge controllers. All the turbines are IEC: 61400 certified and also empanelled with the National Institute of Wind Energy.

WiSH Energy has installed over 35,000 wind, solar and hybrid projects aggregating 80 MW across 40 countries. In India, the company has completed over 300 projects, generating more than 6 MW of clean energy, enough to reduce more than 5 million tonnes of carbon dioxide each year. It recently installed a rooftop wind-solar hybrid system with battery storage for a commercial building in Australia. Talking about some of the company’s most challenging assignments, Ram Vaidyanathan, chief executive officer, WiSH Energy, says, “We commissioned a solar-battery hybrid system on a remote island near Mauritius for a telecom company. Constructed in a cyclone-prone area, the system could withstand 300 km per hour of wind speeds, as opposed to traditional projects which are designed to handle 150 km per hour of wind speed.”

In India, the company recently commissioned a 20 kW wind-solar hybrid project for Bharat Petroleum Corporation Limited (BPCL) at its depot in Kognoli, Karnataka. This project was carried out to serve as a model for BPCL’s plan to install clean power generating systems at all their fuel stations across the country. It has also set up a smaller system for Indian Oil Corporation Limited (IOCL) at one of its stations in Kollam, Kerala. The company is now planning to build larger systems for IOCL’s other outlets. “The company wants to simultaneously expand its operations in the domestic and the overseas markets,” shares Vaidyanathan.

To integrate, manage and operate the varied sources of energy used in these pilot projects, the company uses smart control systems. These systems are being used in areas where tariff is dependent on the time of day. They help store the excess energy generated from a particular renewable energy source, which is later sold to the grid when the tariffs are high. With this, these systems not only solve the issue of intermittency, but also make the hybrid system more cost efficient.

Over the past five years, WiSH Energy has shifted from a product-centric approach to an outcome-based solutions strategy. Thus, apart from selling its micro wind turbines, the company is now focusing on the overall energy requirement of the customer. After the energy requirement is determined, a resource availability study is undertaken and specific solutions are designed based on the results of the study.

“Rather than relying on a single source of generation based on a particular technology like solar photovoltaic (PV) or wind alone, combining multiple sources of renewable energy to create a hybrid system not only delivers a significantly higher amount of generation but also helps in achieving better consistency of generation over the course of a day, month and year,” says Vaidyanathan. 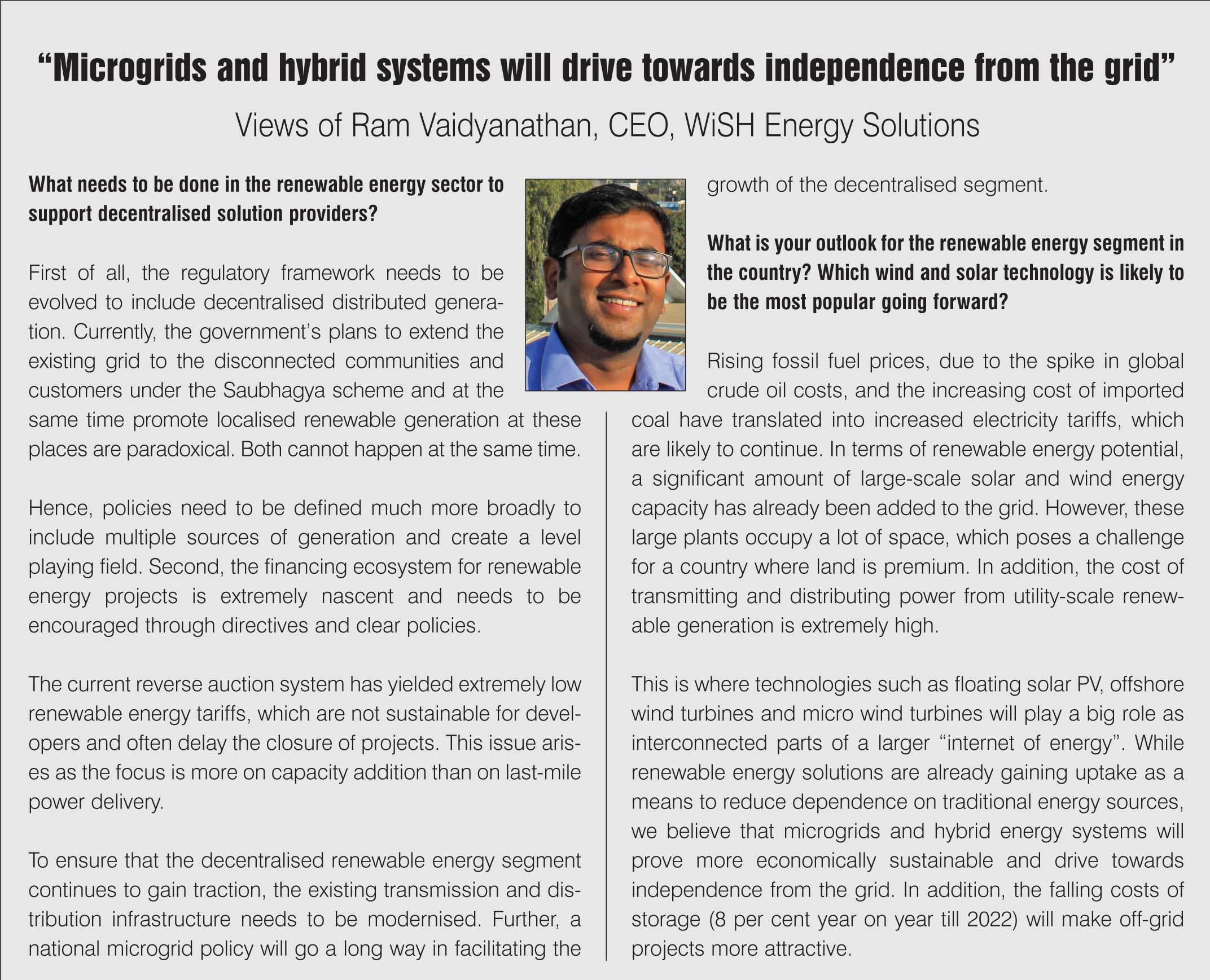 The company has ambitious plans to expand its operations over the next two to three years. In the next year, it plans to double the capacity of its plant in Pune, which currently produces 150-200 turbines a month, and double the revenue target of Rs 1 billion it had set for the year 2018-19. “The company is on course to meet its operational and financial targets this year and we have already set our sights higher for the next year,” says Vaidyanathan.

Going forward, WiSH Energy is looking to target specific sectors such as telecom and fuel stations, where decentralised solutions can reduce the operational expenditure of the customer by more than 90 per cent. The company will continue to develop projects in the Pacific region, Africa and Southeast Asia and expand its network of partners in several of these locations.

It will also continue to refine its existing micro wind turbine product range and will add newer products and solutions to its catalogue. For this, the company is partnering with research institutions in India and overseas to jointly develop new and improved technologies. “We have signed an MoU with CSIR-National Aerospace Laboratories and have successfully designed and developed a wind turbine with a cut-in speed lower than 2 metres per second. This turbine has been installed and we are monitoring its data. Soon, the company is expected to commercialise it,” says Vaidyanathan. The company faces unique challenges in each geography. In Africa, for instance, the company faces difficulty in hiring skilled labour and finding the right partners.

Going forward, the use of stand-alone micro wind turbines may limit the growth of the company. These turbines are suitable for areas with low wind speeds, but customers living in these areas have the easy option of setting up solar panels to meet their energy requirements. Therefore, the company will have to persuade customers to shift to clean energy and to use their micro wind turbines in this transition. Therefore, it is essential to couple these turbines with solar PV and storage solutions. These can be used by mountain and coastal communities, particularly in the fisheries sector. These systems can gain wider uptake in street lighting and telecom towers in urban areas.