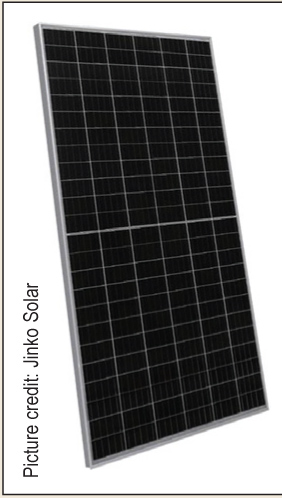 JinkoSolar has launched its 72-cell Cheetah (P-type mono-PERC) module with peak power output of over 400 W, which is claimed to be the highest performing commercially mass-produced monofacial module in the market. The module was unveiled for the first time at SNEC 2018 in Shanghai.

All the JinkoSolar Cheetah series modules are produced at the company’s next-gen ultra-smart P5 super factory, which is claimed to represent the most cutting-edge technology in solar module manufacturing. Utilising an all-new wafer and cell design, the Cheetah series includes ultra-high performing modules with its industry leading performance in metrics such as output, limited degradation, shade tolerance and durability. The Cheetah 400 Wp is claimed to have over 30 Wp higher performance than that of comparable products in the industry.

The maximum benefit of the Jinko Cheetah series is achieved while combining it with the half-cut cell (HC) technology. The 72-cell Cheetah modules, combined with Jinko HC technology, will reach 400 Wp with a conversion efficiency of up to 19.88 per cent. In this way, not only is the performance of the photovoltaic (PV) module improved, but also its reliability, thanks to the lower solar cell current and related lower heat losses. The combination of Cheetah and HC technologies has improved the temperature coefficients to -0.37 per cent per degree Celsius, consequently boosting the high performance of PV modules even in extreme environmental conditions by 2-3 per cent compared to standard full-cell solutions.

The Cheetah series modules are manufactured using larger wafers and mono-PERC cells, thus increasing the module peak power by 8 Wp compared to the previous generation of PV modules. Further, by combining Cheetah technology with the HC module configuration, the module power can be increased by an additional 7 Wp and the entire system can benefit from the higher shading loss mitigation, which is a positive side effect, resulting in higher yields when the module is partially covered.