Solar photovoltaic (PV) has emerged as the fastest growing renewable energy technology in a span of a few years and is second only to wind in terms of uptake. This growth has been driven by declining costs as well as increasing energy demand, environmental concerns and government support. The global installed PV capacity stands at about 300 GW as of end-2016 and is expected to almost triple by 2025. In line with the global trends, 9.3 GW of solar PV capacity was added in India during 2017-18 to achieve a total installed capacity of 21.6 GW as of March 2018.

The significant capacity additions worldwide and growing customer demands have led to continuous innovation in the solar industry and have significantly reduced  solar cell and module costs. There has also been an upsurge in research and development (R&D) activities aimed at improving module performance and the overall manufacturing process. Solar PV cell and module efficiencies have also increased considerably over the years and efforts are being made by various scientists and researchers to enhance them further.

Globally, crystalline silicon is the most widely used solar PV module technology with a market share of more than 90 per cent. Of this, polycrystalline modules hold the majority share owing to their lower costs, even though monocrystalline modules provide higher efficiencies. However, this trend seems to be changing with the growing demand for more efficient products.

New trends are emerging in the PV technology space. Passivated emitter and rear cell (PERC) technology – PERC monocrystalline technology – has seen rapid advancements and is continuously evolving to achieve an enhanced performance. PERC technology reduces surface recombination and increases cell conversion efficiency by adding a dielectric passivation layer at the rear side of the cell. The market share of PERC cells has increased sevenfold during 2014-17, driven by China’s efforts to achieve greater efficiencies, which will ensure greater energy output and thus higher levellised cost of energy.

In India, the trend in the PV technology space is different from the global scenario. While the global market is solely dominated by c-Si technology with a share of 90 per cent, the Indian market has a sizeable share of thin-film as well. As per Renewable Watch Research, c-Si accounted for 57 per cent and thin-film for 36 per cent of the total solar capacity of 2,125 MW tracked under a study conducted in January 2018. The remaining 7 per cent was based on a combination of crystalline and thin-film technologies.

Thin-film technology was more popular in the initial years of solar development in India, and is thus dominant in projects commissioned during 2009-12. This technology type suits the Indian weather conditions of heat and humidity as it experiences slower degradation compared to crystalline. However, with the introduction of Chinese modules in the country and the world at large, crystalline has become the preferred choice of technology among solar power developers.

Solar modules are highly sensitive to temperature and suffer a reduction in output once the temperature reaches around 50 degrees Celsius. This reduction in output is much less in the case of monocrystalline modules, which makes them a more suitable choice for developers, particularly in a subtropical country like India. The increased longevity, performance and efficiency of these modules make them a good buy. As a result, a significant number of new installations in the country are being based on monocrystalline technology. 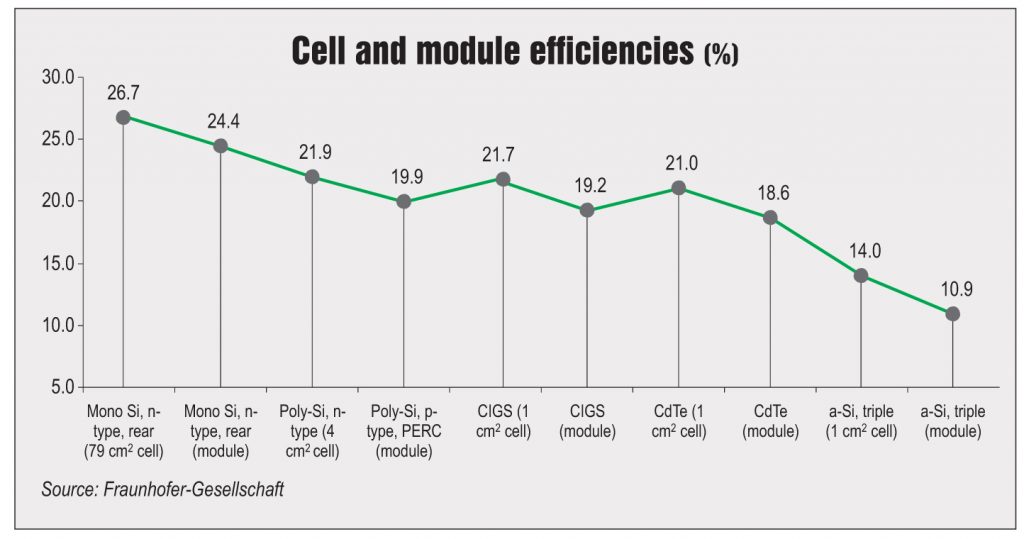 Over the years, monocrystalline cells have seen several technological advancements, which include reduction in wafer thickness to save on material costs while maintaining the efficiency level. Globally, silicon usage has decreased from 16 gm to 6 gm per watt peak in a span of 12 years, and continues to decline. On the other hand, the performance ratio has increased from 70 per cent in the 1990s to 80-90 per cent today, with relatively low variance.

As per the International Energy Agency, the spot price of monocrystalline solar panels declined by 37.5 per cent from 72 cents per watt in 2016 to 45 cents per watt in 2017. Monocrystalline offers much greater efficiency than polycrystalline for cells of the same weight and size, but is slightly more expensive. In addition, a feedback loop seems to be operating on the global scale due to the overall decline in module prices and increase in capacity. Higher efficiency modules are being made more affordable, thus driving investment and scale and further reducing prices. This in turn will increase the demand for monocrystalline. The continuation of this cycle will eventually close the gap between spot prices of monocrystalline and polycrystalline cells and modules.