The decision on levying safeguard duties on imported solar modules is yet to be taken by the government. It is most likely to apply to  Chinese modules, which accounted for 88 per cent of the imports in 2016-17. The decision is aimed at providing a level playing field for domestic solar module manufacturers by increasing the import cost of ultra-cheap Chinese modules and, thereby, reducing their share in the Indian solar market.

This is not the first time that Chinese solar module imports have faced opposition from the domestic industry. The US and the European Union have both levied heavy duties against Chinese companies. However, the major difference between these and the Indian solar market is a developed manufacturing industry. The report “SURYA to Boost Solar Manufacturing in India” by the Shakti Foundation, in association with the Indian Chamber of Commerce and ICF International, provides an insight into the module manufacturing costs prevalent in India, besides suggesting solutions to improve the domestic solar manufacturing base. Renewable Watch Research analyses the report in terms of module manufacturing costs and various safeguard duty investigations being carried out at different levels. 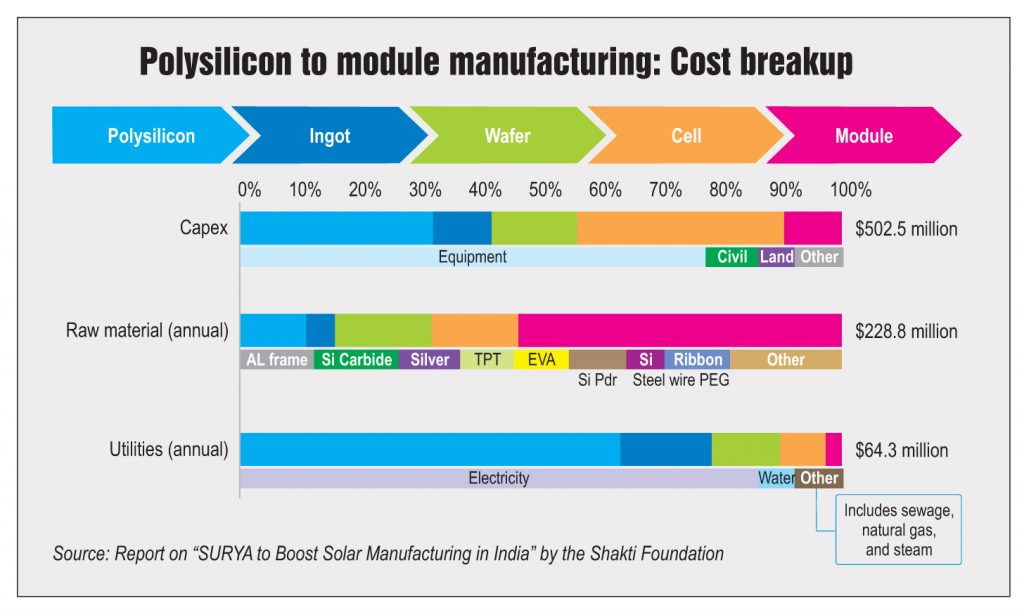 In October 2011, the US launched countervailing duty and anti-dumping duty investigations following complaints by the Coalition for American Solar Manufacturing, the US Department of Commerce and the US International Trade Commission (ITC) against the Chinese invasion in the crystalline silicon industry. In December 2011, the ITC ruled that Chinese modules were being sold at less than fair prices, which resulted in damage to the US industry. Following this, an average 25 per cent of anti-dumping duty and 15 per cent of countervailing duty were levied on Chinese modules.

In May 2017, another investigation was launched by the US ITC into solar module imports based on a petition by the now bankrupt Suniva. As a result, a 30 per cent anti-dumping duty has been levied on Chinese, Taiwanese and Malaysian imports. However, 100 other countries have been exempted from the duty, including India.

In June 2013, the European Commission (EC) imposed a minimum import price (MIP) in addition to anti-dumping and anti-subsidy duties for a period of two years. An MIP of Euro 0.56 per watt was imposed and anyone falling outside this price band would attract an anti-dumping duty of 64.9 per cent. Moreover, anti-subsidy duties were capped at 11.5 per cent. However, these measures were extended till March 2017 on the appeal of EU ProSun. In February 2018, a final extension was provided for another 18 months. The EC has now proposed to cut the MIP to Euro 0.46 per watt, owing to a decline in global module prices.

The study has been carried out for a fully integrated multi-GW plant scaled down to 1 GW, assuming that 7.5 per cent basic import duty and 18 per cent countervailing duty are applicable on plant and machinery. The cost per GW is defined for the entire process of manufacturing modules from polysilicon. Typically, manufacturers start by setting up module manufacturing first and then trace the path vertically backwards.

According to the study, raw material is the major cost component in the entire solar module manufacturing process. Through the process, a capital expenditure of $502.5 million per GW is incurred, of which equipment cost accounts for 75-80 per cent, besides land costs, civil works and other miscellaneous capital costs. Significant capex is required for polysilicon and cell manufacturing, while that required for wafer and module manufacturing is relatively less. The raw materials required at each stage of the process cost about $229 million per GW annually. This includes an aluminium frame, silicon carbide, silver, silicon, ribbons and steel, among other things. Module manufacturing accounts for the largest share of raw material costs, over 50 per cent. The annual operational expenditure (opex) on utilities such as electricity, water, sewage and steam during the module manufacturing process is typically about $63 million per GW. Of these, electricity is the largest expense at 90 per cent of the total costs. Meanwhile, the polysilicon to-ingot-process accounts for the highest utility cost followed by the ingot-to-wafer process. Based on these calculations, the study provided an estimated module cost from an integrated facility in the current scenario of $0.42 per watt. 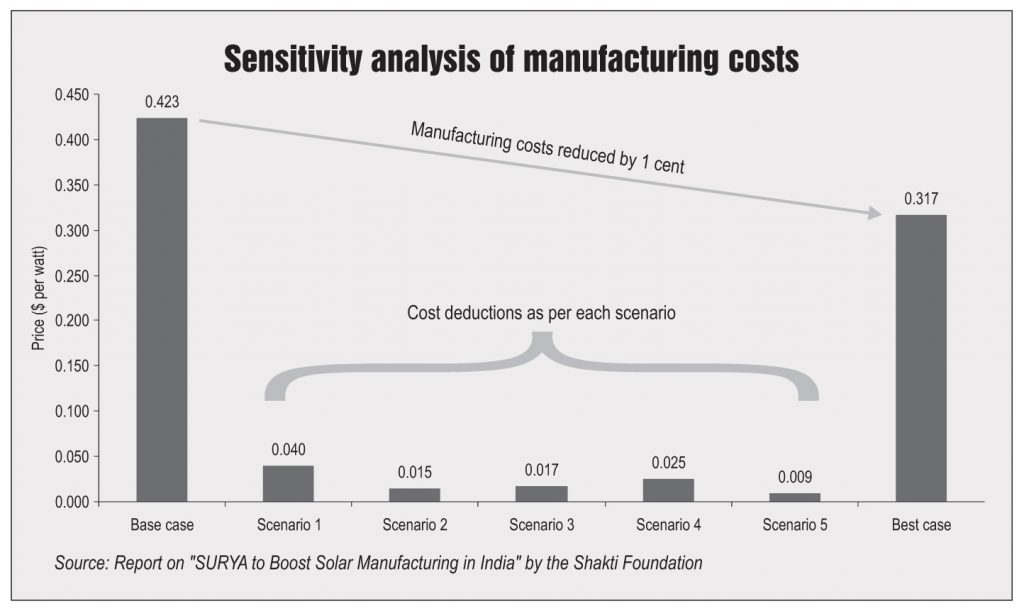 The study performed a sensitivity analysis to determine the impact of different incentives, subsidies and duties on the integrated solar manufacturing cost of a 3 GW facility. The different cases are defined as follows:

Based on the analysis, the report found that the cost of electricity and production subsidies impacts solar manufacturing costs in the country the most. In the best -case scenario, wherein all duties are waived and all subsidies are provided to the manufacturing unit, the difference in costs is about $0.1 per watt.

A simultaneous elasticity analysis was conducted by the study to understand the impact of three major subsidies – power, capex and opex – one parameter at a time. It was found that for every Re 0.50 reduction in power costs, the overall cost reduced by about 1.5 per cent. Meanwhile, if the capex reduced by 5 per cent, the costs decreased by 1 per cent. However, if the opex reduced by 5 per cent, there was a 3 per cent reduction in costs. Therefore, it can be concluded that manufacturing costs are most sensitive to opex and electricity costs.

It is necessary to have a policy on solar manufacturing and an incentive package to support the creation of integrated solar manufacturing facilities. The study recommends the SURYA policy – Solar Utpaadan and Rozgaar Yojana – wherein building two polysilicon-to-module and two polysilicon-to-wafer manufacturing facilities may be considered within a period of five years, with an outlay of Rs 90.4 billion to Rs 223.8 billion. The proposed policy can be implemented based on four options:

Option 4: This option considers waiver of duties on capital equipment, in addition to the benefits in option 3. It would require an outlay of Rs 183.1 billion. The expected cost of manufacturing through this option would be $0.31 per watt.