Historically, the utility-scale power plant design has been determined by scale economics, fuel availability and environmental impact. The world’s first 300 MW class, 100 per cent biomass-fired Tees renewable energy plant (Teesside) is being constructed based on these parameters.

The 299 MWe plant, located in the Teesport Estate near Middlesbrough, UK, will become the world’s largest circulating fluidised bed (CFB) technology-based plant firing only virgin biomass sourced from international sustainable sources. Teesside is expected to start commercial service in January 2020. The principal market driver for the development of the Teesside plant was environmental, that is, decarbonisation of the UK energy generation industry in order to help meet the country’s carbon emission reduction target. Promoting natural gas and nuclear energy is also a part of the country’s approach to reducing carbon emissions. However, the future cost of natural gas is uncertain and prices are often quite volatile. Nuclear energy, on the other hand, is carbon-free but new plants are controversial and have an uncertain lead time.

Utility-scale biomass-fired power plants have all of the advantages of a fossil-fired plant and none of the disadvantages commonly associated with other renewable technologies. For example, when biomass is burned in a CFB boiler in a conventional steam cycle, the plant produces firm baseload power, unlike intermittent solar and wind technologies. In addition, biomass combustion is considered carbon-neutral because sustainably managed forests act as a net sink for carbon dioxide from the atmosphere. Carbon released during biomass combustion returns to the atmosphere but is removed by the forests. At Teesside, the plant fuel will be 70-100 per cent wood pellets sourced from sustainable forest by-products in North America delivered to the port at Teesport. The remainder of the biomass fuel burned by Teesside will come from sustainable wood chips sourced primarily from the UK and delivered over land.

While wood chips and pellets are the dominant biomass fuels in use today, there is a wide range of biomass materials available in the market, with new sources being introduced regularly. The biomass fuel market is no longer dependent on locally produced biomass, as it can now procure biomass from a variety of sources in a growing global fuel market. The carbon footprint of biomass plants does not change with plant size, unlike other fossil-fuel based technologies, but the increasing size of CFB plants does improve project-scale economics. Dispatchable, utility-scale, CFB biomass projects provide an elegant solution to the fuel selection dilemma. Moreover, Teesside qualifies for the UK government’s Contracts for Difference scheme, which awards subsidy contracts to green energy developers.

CFB technology also provides the developer with additional fuel supply options such as agricultural biomass and other forms of locally procured opportunity fuels with high moisture content. Sumitomo SHI FW has commissioned more than 490 CFB boilers so far. Of these, around 120 are designed for firing different quantums of biomass – 54 units fire biomass as the primary fuel and over 20 units fire 100 per cent biomass.

MGT Teesside Limited has selected TécnicasReunidas (TR), in a consortium with Samsung C&T, to build the new combined heat and power (CHP) plant in the Teesport Estate under an engineering, procurement and construction contract. The project is being built on a brownfield site at the Teesport port facilities. It will receive revenue from the sale of electricity under a combination of a market price power purchase agreement and a “contract for difference”, which provides a variable “top-up” between the market price and a fixed strike price that will grow with inflation. 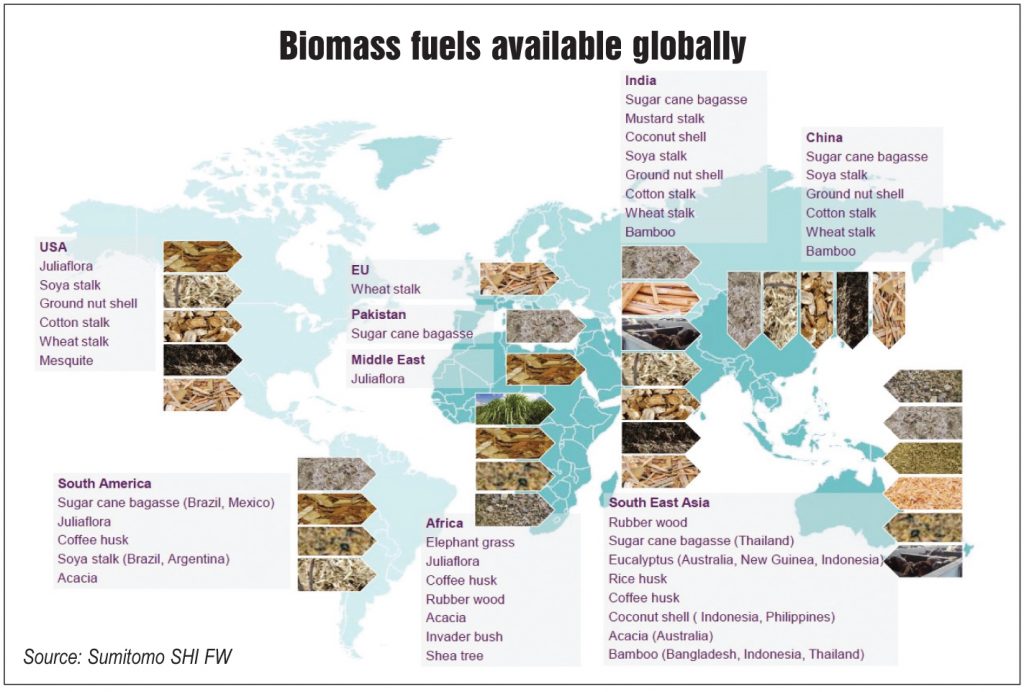 Until Teesside is commissioned, ENGIE’s 205 MWe (447 MWth) Polaniec Unit 8, in Poleniec, Poland, is the world’s largest utility-scale power plant firing 100 per cent biomass. The “green unit” has been in commercial operation since November 2012. In 2016, it operated at a net efficiency of 37.5 per cent and produced 1.52 TWh of electricity, representing about 25 per cent of Poland’s renewable energy market. Polaniec Unit 8 fires a mixture of 80 per cent wood chips and 20 per cent agricultural waste sourced within a 100 km radius of the plant. Sumitomo SHI FW provided the boiler island, fuel yard and other auxiliary equipment on a turnkey basis. The Teesside CFB design is a scaled-up technology successfully used by the green unit.

Teesside will be the largest of its kind, though not physically bigger than the latest CFB units firing fossil fuels owing to the dry, high quality fuel supply. In addition to a 50 per cent increase in plant rating, Teesside’s steam conditions reflect recent technology advances, which will result in increased efficiency. For example, while the Polaniec Unit 8 CFB boiler produces steam at 127.2/20 bar (a) at 535C/535C (superheat/ reheat),  Teesside steam conditions have been pushed up to 176/43 bar (a), and 568/568C. With the supply of clean biomass and a state-of-the-art design, high availability and acceptable lifetimes of boiler pressure parts can be maintained at these steam pressures and temperatures.

Fuel for the plant comprises 70-100 per cent wood pellets, sourced from sustainable forest by products in North America and delivered by Supramax-size vessels to the port at Teesport. The remainder of the biomass fuel burned by Teesside is sourced in the form of sustainable wood chips delivered over land, primarily from the UK.

The low sulphur wood pellets contain little moisture (5 per cent), ash (1 per cent) and sulphur (0.02 per cent), and therefore produce low emissions. The pellets also have an excellent fuel heating value of 17.8 MJ per kg. When the wood pellets are mixed with 30 per cent domestic wood chips having 18.5 per cent moisture content, the fuel heating value is reduced to 14.95 MJ per kg. The mixing ratio is highly variable and the boiler is capable of burning up to 100 per cent pellets at full load. 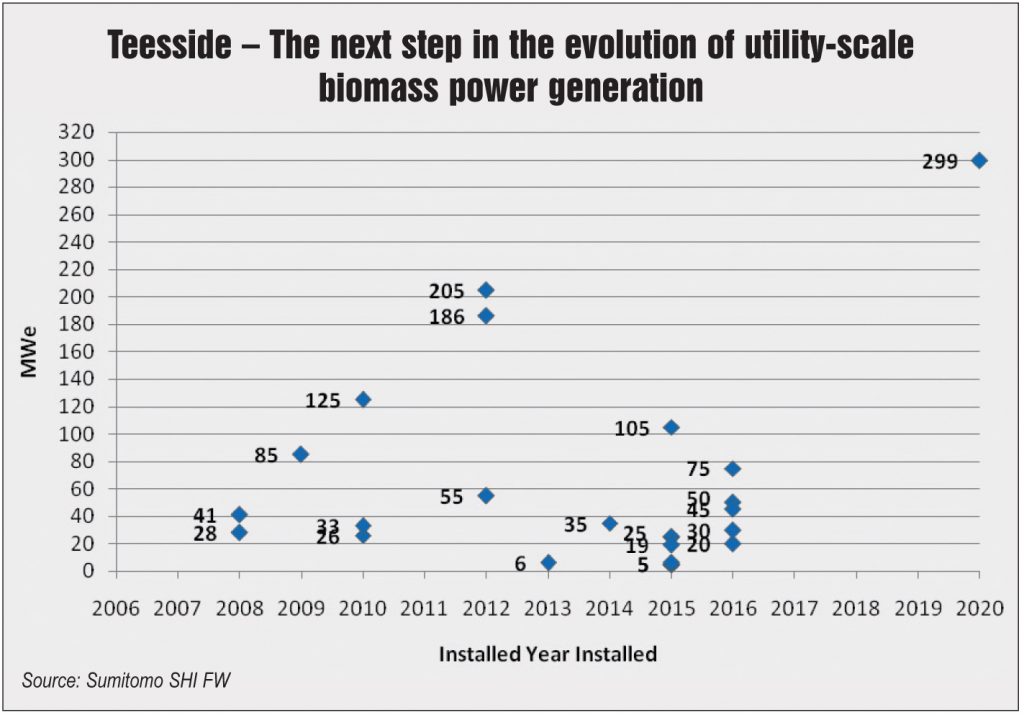 The steam cycle design includes provisions to deliver low pressure steam, to the order of 6 MWth, to the wood chip dryer in order to reduce the moisture content of the incoming wood chips, thus maintaining the plant’s CHP status. Fuel will meet the sustainability threshold in terms of sustainable timber harvesting and carbon footprint based on fuel supplier guarantees. In addition to providing nearly carbon-free energy by using renewable sources, the plant will meet the most stringent emission limits set for traditional (35 mg/m3n SO2, 140 mg/m3n NOx, 50 mg/m3n CO, and 5 mg/m3n dust) air emissions.

Teesside boiler steam conditions of 570 °C and 170 bar (a) were selected for maximum steam cycle efficiency. The clean fuel selected allows these high steam pressures, which is about the maximum applicable in natural circulation boilers. Steam temperatures that produce high cycle efficiency also yield acceptable superheat and reheat boiler tube life with clean biomass. The Teesside CFB boiler and auxiliary equipment are installed in an enclosed building. The process is as follows:

Gas side: Flue gas leaving the top of the furnace enters steam-cooled high efficiency solids separators. Separated solids are conveyed to the return leg and returned to the furnace. After the back pass convective heat exchanger and catalyst, the flue gas stream is divided for the rotary air preheater (RAPH) followed by the bypass economiser, which heats up part of the boiler water extracted from the turbine island, thereby reducing the demand for steam turbine extraction steam. These parallel streams are joined before the flue gases are cleaned in a high efficiency baghouse. Between induced draft fans and stack, gases are cooled down to a potentially corrosive temperature. Thus, a corrosion-resistant flue gas water heat exchanger with plastic tubes is used.

Steam side: A regenerative steam cycle with reheat that produces the highest plant efficiency is used at Teesside. A high-performance steam turbine, with four stages of low pressure and three stages of high pressure feedwater heating, turns the generator. A 40-cell air-cooled condenser designed for 10 °C  operation is used to condense the steam from the steam turbine exhaust.

The steam leaving the high pressure turbine is brought back to the boiler for reheating. The first-stage reheater is located in the convection pass and is equipped with a steam-side bypass used for reheat steam temperature control. At higher loads, part of the reheat steam bypasses the first reheater (RH I), which reduces heat absorption and hence RH II inlet steam temperature. In this design configuration, reheat steam control is typically not required, thus preventing a loss in plant efficiency, which is typically experienced by fossil-fuel based plants. Final reheating (RH III) is performed in two INTREX heat exchangers submerged in the bubbling hot solids in the lower furnace and protected from corrosive elements in the combustion gases.

A closed cooling water circuit then transfers heat into the combustion air upstream of the RAPH, replacing auxiliary steam normally needed at the first stage of air preheating. As a result of lower flue gas exit temperature, little steam extraction and auxiliary steam consumption, the boiler efficiency as well as overall process efficiency is improved. A similar system has been in successful operation since 2010 at the 458 MWth biomass CFB boiler in Jyväskylä, Finland.

The steam plant is designed to operate in sliding pressure mode in order to maximise efficiency over its load range and allow the unit to respond to rapid load changes when operating at baseload conditions. To do so, the steam pressure is set based on the operator’s load demand signal and the CFB boiler operates to maintain the desired HP steam header pressure, when operating at 40-100 per cent load.

In DSI, powdered sorbent (calcium hydroxide or sodium bicarbonate) is pneumatically injected into the flue gas, acid gas is adsorbed onto the sorbent and dry waste product is removed via a particulate removal device. It is a simple system with low capital and operation costs when the required level of acid gas removal is moderate. However, DSI has limited the SO2 removal capability. For Teesside, DSI may be needed with high sulphur wood supplies, but is not needed with normal clean biomass. Also, by injecting powdered activated carbon, mercury and dioxins and furans can be absorbed. The sorbent is then removed in the high efficiency filter before the combustion gases are released into the atmosphere via the stack. Selective non-catalytic reduction (SNCR) – ammonia injection into separators and/or into furnace depending on load – is used for NOx control. A slip catalyst in between two economiser stages minimises NH3 slip while utilising SNCR.

Scaling up for larger units