The last quarter of financial year 2017-18 saw a flurry of merger and acquisition (M&A) activity in the Indian renewable energy sector, including a billion dollar deal in which Greenko acquired Delhi-based Orange Renewables. Multiple factors contributed to creating a favourable environment for M&As in the industry as companies look to demerge their liabilities and acquire well-performing assets in order to expand their portfolios.

In 2017-18, as of March 2018, M&A deals in the renewable energy sector have exceeded $7.6 billion. The surge in M&A activity can also be attributed to the entry of a large number of global participants with deeper pockets, big appetites and the bandwidth to withstand profit margin pressures. In a rapidly growing and changing renewable energy market such as India, the quantum of returns takes priority over the quality of returns. Therefore, companies are looking to expand their project portfolios instead of relying on the returns from a few operational projects. In fact, a low-profit environment, in which smaller players are unable to reap optimal returns, is seen as an opportunity by the bigger players for achieving rapid inorganic growth.

The Greenko-Orange deal, with an enterprise value of $1 billion, comprises $350 million of equity and $650 million of debt. The deal includes the acquisition of Orange’s 750 MW of assets spread across five states and takes Greenko’s operating assets portfolio to 4 GW, making it the largest green energy supplier in the country.

One of the biggest deals in the global renewable energy space was signed in February 2018. This was the acquisition of Singapore-based Equis Energy by a consortium led by US-based Global Infrastructure Partners. Other investors in the deal included Canada’s Public Sector Pension Investment Board and China’s CIC Capital Corporation. Equis held 11.3 GW of assets across 180 countries including India, Australia, Japan, Thailand, Indonesia and the Philippines. The company’s Indian portfolio consisted of Energon, operating in the wind power segment, and Energo Soleq, in the solar segment. These firms together account for 974 MW of capacity in India, which includes 414 MW of operational wind assets and 260 MW of solar assets. Meanwhile, 300 MW of assets are under development.

In the same month, the Canada Pension Plan Investment Board (CPPIB) acquired a 6.3 per cent stake in ReNew Power from the Asian Development Bank (ADB) for $144 million. ADB had acquired this stake in 2014 for $50 million. CPPIB is planning to invest another $200 million in ReNew Power in the form of compulsory convertible preference shares that will convert into equity shares at the time of the company launching its initial public offering.

Bengaluru-based Orb Energy saw a capital influx of $15 million during the year, aimed at expanding its portfolio in India and Kenya. Of the total investment, the Netherlands Development Finance Company provided $4 million as equity and the Overseas Private Investment Corporation provided $10 million as long-term debt, which will be used for the company’s India operations. The remaining $1 million was raised for its Kenya-based operations. While Africa-based finance company Pamiga provided $500,000 in equity, Germany-based DEG provided $550,000.

In September 2017, a significant deal was signed  between Piramal Finance and Hyderabad-based Mytrah Energy. The former invested Rs 18 billion in Mytrah Energy in the form of non-convertible debentures with a tenor of seven years. The new capital will be used to fund the exit of early investors such as IDFC Investments, AION Capital, Merrill Lynch and Goldman Sachs from the company.

In August 2017, Sembcorp Industries acquired IDFC’s remaining 28 per cent stake in its wholly owned subsidiary, Sembcorp Green Infra (SGI), for Rs 14 billion to become the sole owner of SGI, which has about 1,200 MW of wind and solar assets at various stages of development. The acquisition will help strengthen Sempcorp’s position in the renewable energy market. In April 2017, Singapore-based vertically integrated Hareon Solar acquired a 45 per cent stake in Azure Power Thirty Seven, a wholly owned subsidiary of Azure Power, for $76.6 million. The funds have been earmarked for the development of 118 MW of solar power capacity in Telangana, for which a $40 million contract has been signed with Hareon Solar for the supply of its modules. 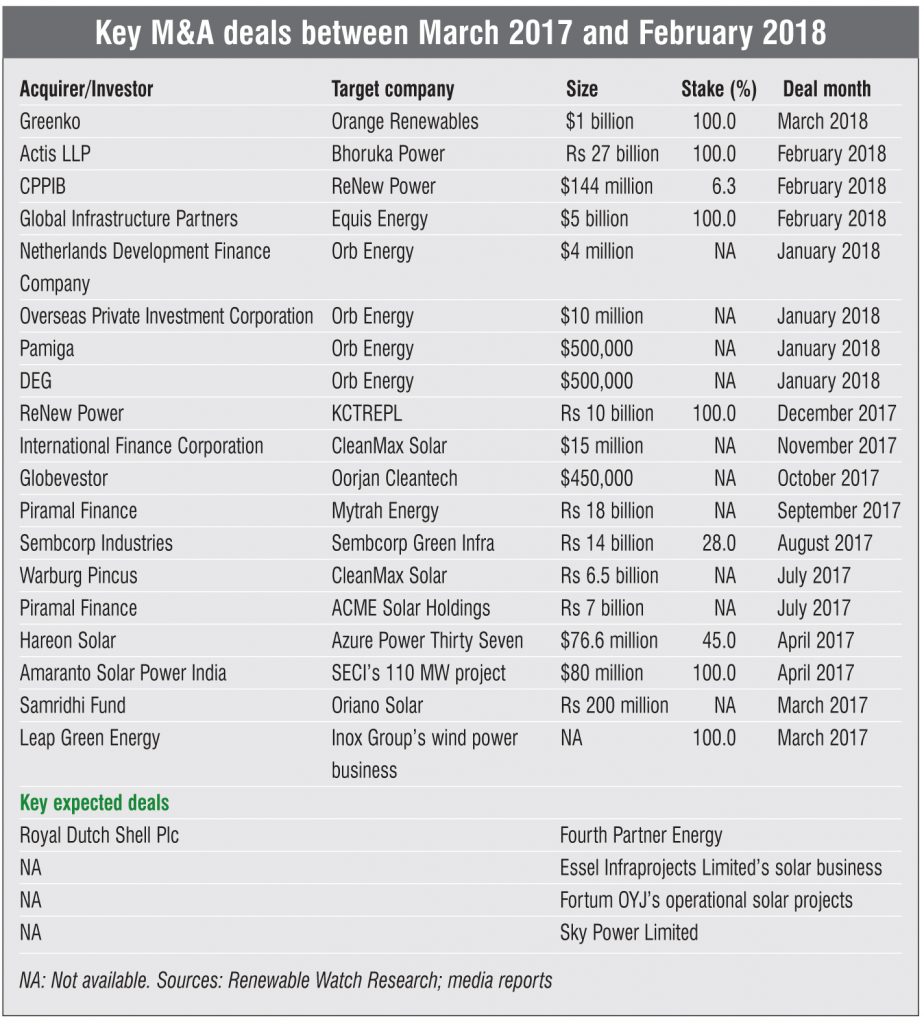 M&A activity in the Indian renewable energy space has moved beyond company-based equity transactions to project equity. In this regard, Amaranto Solar Private Limited acquired a 100 per cent stake in the Solar Energy Corporation of India’s (SECI) 110 MW project for $80 million.

India’s renewable energy growth has been driven largely by incentives and targets. However, recent auctions have led to a market-driven cost and tariff determination system, wherein global capital costs have defined tariffs in successive auctions. Globally, the cost of capital has declined, thus reducing the cost of debt. In fact, on a global scale, it is expected that solar and wind power growth will be propelled by trends in the cost of capital instead of technology-based costs.

While financial costs in India have reduced over the past two years, the average interest rates are still higher than those in most emerging renewable energy countries. The high costs lead to even lower margins, which, in turn, have been driving M&A activity in the sector.

Given the recent opening up of the Indian renewable energy market and the government’s ambitious targets, the business environment in the country is conducive for small and medium start-ups. However, the sustainability of these companies is doubtful owing to the growing operational pressures and other risks such as PPA renegotiation. This further aids consolidation as bigger players with high-risk-taking capabilities look to expand their presence at the cost of the smaller players. The trend of consolidation can also be seen as an opportunity for non-core players struggling with poorly performing assets to unload their liabilities onto core renewable energy companies. A case in point is Welspun Renewables’ acquisition by Tata Power Renewable Energy Limited in June 2016, wherein the Welspun Group, a textile conglomerate, demerged its renewable energy assets as operational pressures led to losses.

Consolidation is expected to continue in the Indian renewable energy market over the next few years, at least until the cost pressures subside and a stable business environment is achieved. There are several deals in the pipeline as some companies look for exit options from the market while some plan to enter it. Royal Dutch Shell is reportedly looking to buy a majority stake in Hyderabad-based Fourth Partner Energy. Meanwhile, Essel Infraprojects Limited has mandated Investec to look for a buyer for its solar assets. Fortum OYJ has hired Barclays Bank to sell a stake in its operational solar projects in the country. Also, SkyPower Limited has appointed Yes Bank to sell its stake in the Indian solar power business.

The cost and tariff corrections expected in 2018-19, along with heightened tender activity, are expected to further drive M&As in the next financial year.