The electricity system in France is undergoing a rapid transformation. The key trend that is driving the energy transition process in the country is the increasing share of renewable sources in the energy mix. Under the Energy Transition Law of 2015, the government has set a target to achieve a 32 per cent renewable energy share in the final energy consumption by 2030.

According to the country’s transmission system operator (TSO) Réseau de Transport d’Électricité (RTE), in the third quarter of 2017, electricity production in the wind, solar and bioenergy sectors grew by 11 per cent over the second quarter of 2016. The total renewable capacity has increased by over 2,030 MW in the past 12 months, with wind and solar together accounting for 95 per cent of this increase. The share of renewable energy in the country’s final energy consumption has also increased from an average 9.2 per cent in 2005 to 14.9 per cent in 2015, as per statistics released by the Commissariat général au développement durable or the General Commission for Sustainable Development.

To support the government’s 2030 renewable energy consumption target, RTE is developing cross-border links and reinforcing network capacity, which, in turn, will ease the interregional transmission of renewable energy across the country. As per RTE’s Ten-Year Network Development Plan (TYNDP) 2016, Euro 10 billion will be spent on the country’s electricity transmission network during 2017-26. During this period, RTE will continue to channel its investments towards integration of new generation sources; strengthening of its cross-border exchange capacity; operational safety of networks and improved quality of supply; and expansion and upgradation of its information systems.

The country’s transmission grid comprises transmission lines and grid stations at the 45-400 kV voltage levels. As of end-2015, RTE had a transmission network of 106,170 ckt. km and a transformer capacity of 236,129 MVA. The company has electricity interconnections with Italy, Switzerland, Germany, the UK, Belgium and Spain. Nearly 53 per cent of the line length operates at 45-90 kV voltage levels; 25 per cent at 225 kV; 21 per cent at 400 kV; and the remaining operates at the 150 kV, 200 kV and 270 kV levels.

Between 2007 and 2016, RTE’s annual investment in the electricity transmission network grew steadily, from around Euro 600 million to Euro 1,519 million. The investment programme for 2016 focused on the strengthening of the country’s interconnections with neighbouring European networks, construction of new generation facilities, network development in line with the changes in consumption, and asset renewal. Notably, more than 30 per cent of the network investment was spent on renewable energy integration projects.

RTE has planned massive investments for achieving the renewable energy goals set under the Energy Transition Bill of 2015. As per RTE’s TYNDP 2016, Euro 10 billion will be spent on the country’s electricity transmission network during 2017-26. Apart from these investments, Euro 200 million will be invested annually to cover various network requirements such as information systems, remote network controls and information exchange among market players, telecommunications, logistics and real estate.

Currently, work on projects involving around 1,102 km of high voltage lines, 5,030 MVA of transformer capacity and 12 substations is under way. These projects are likely to be commissioned by 2020. Meanwhile, RTE has planned significant long-term investments for strengthening its European interconnections. The company is undertaking several cross-border transmission projects, which are at various stages of development.

One of the key cross-border projects is the 1,330 km, 500/600 kV BRITIB project with Spain and the UK. The project, worth Euro 2,450 million, entails the construction of a three-branched submarine high voltage direct current (HVDC) interconnector linking Spain, France and the UK. The project is being supported by the European Commission, which has also partially funded the feasibility study for the link.

In addition, RTE is involved in building the 400 km, 320 kV Gatica-Cubnezais line with Spain. The Euro 1,750 million project consists of an HVDC voltage-sourced converter (VSC) link (mainly subsea) in the Bay of Biscay, connecting Gatica (Basque Country, Spain) and Cubnezais (Nouvelle Aquitaine, France). The project is aimed at improving the interconnection between Iberia and mainland Europe, and increasing renewable energy integration (particularly solar) in Iberia.

Another project is the 320/563 kV AQUIND Interconnector. The project involves the construction of a 240 km, 2 GW interconnection link between Lovedean, near Portsmouth in the UK, and the Le Havre area, in France. The HVDC power link, which will run both undersea and underground, will connect the nuclear-powered electricity grid in northern France to southern England. The Euro 1,400 million project is being funded entirely by private investment, without any government subsidies.

Meanwhile, RTE and the UK’s TSO National Grid Plc are undertaking the 250 km, 320 kV Interconnexion France-Angleterre 2 project, which is the second interconnector that crosses the English Channel between the two countries. The project, worth Euro 685 million, involves the construction of a new subsea HVDC VSC interconnector between the two countries. It is aimed at increasing the interconnection capacity between the UK and Europe and integration of renewable energy, especially wind, in the UK. In France, it will connect to the transmission system at the 400 kV Tourbe substation in Lower Normandy, around 28 km inland. In the UK, it will connect the 400 kV substation at Chilling Lane in Hampshire. 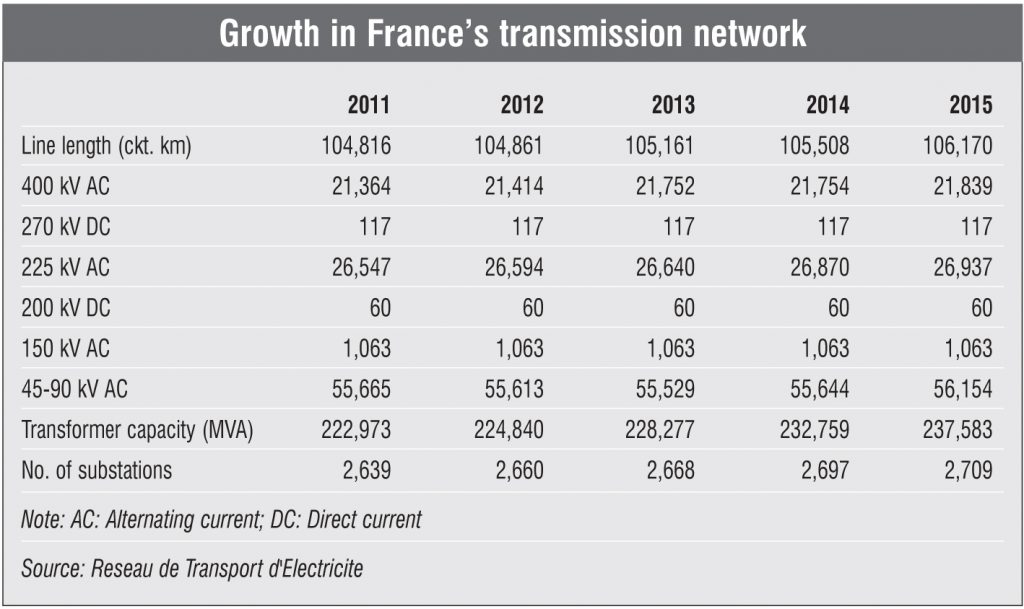 In view of the growing environmental concerns regarding the ecological footprint of power systems, France is seeking to transform its high voltage grid to preserve the environment and the country’s biodiversity. To this end, RTE is looking to modernise its electricity network so as to align it with the expectations of market players and citizens. In this regard, a key project is being undertaken by RTE for the modernisation of the Hautes-Alpes network. The project involves the construction of new subterranean connections and dismantling of 206 km of overhead lines. It is scheduled for completion in 2020, and will reduce the overhead network in the valley by half (356 towers instead of 670). Further, in September 2017, RTE launched a new innovation programme for start-ups, students, associations, designers, architects and artists. With this, it aims to discover innovative solutions for a safer, more efficient, more economical and cleaner electricity transmission network.

The French government aims to significantly increase the share of renewable energy in its energy mix, and RTE is playing a key role in the country’s energy transition. The company has planned massive investments for the sector to achieve the 2030 target of 32 per cent renewable energy in the final energy consumption. These investments will be directed towards projects aimed at integrating renewable energy sourced from both cross-border power exchange and domestic generation. While the TYNDP 2016 will facilitate energy transition and strengthen cross-border ties, the timely execution of projects and sourcing of funds are crucial for its success.