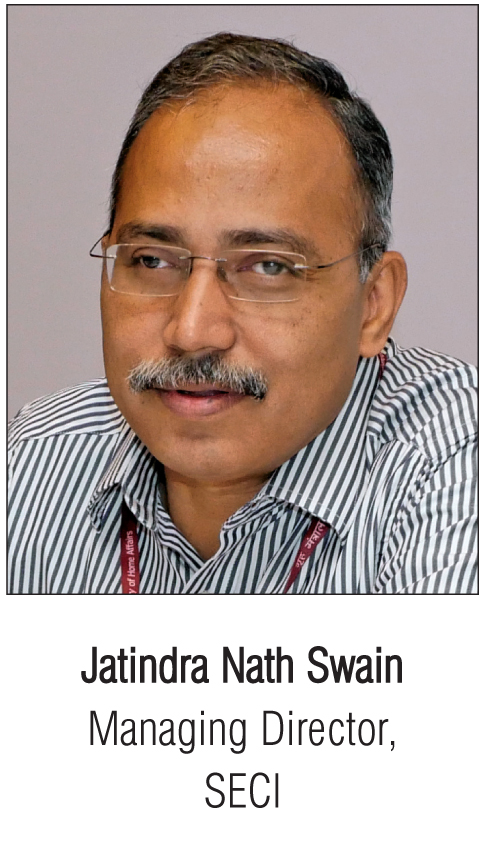 The Solar Energy Corporation of India (SECI) has played a disruptive role in the solar and wind energy segments, as is evident from the steep decline in tariffs discovered in its recent tenders. It is now set to play a bigger role in the renewable energy sector in emerging segments such as energy storage. In an interview with Renewable Watch, Jatindra Nath Swain, the recently appointed managing director of SECI,  speaks candidly about the issues plaguing the sector, the upcoming capacity and tenders, and the outlook for the industry. Excerpts…

What have been the key highs and lows of the renewable energy sector in the past one year?

The highs and lows can both be associated with the low tariffs recorded in recent tenders. There are concerns in the industry over the sustainability of these tariffs, and the interest of bidders and project winners in the solar segment. In addition, there is an expectation that tariffs will fall further, fuelling the general reluctance of utilities to sign power purchase agreements (PPAs) at rates that are slightly above the latest auction results.

What are your views on the viability of these tariffs?

Most of the bidders are confident that the tariffs proposed by them are viable and have, therefore, signed PPAs. Both the bidders have signed PPAs at the proposed tariff of Rs. 2.44 per kWh. If there is pressure on profit margins, there may be some consolidation after one or two years, when the companies may sell their assets.

What has been the progress on various solar programmes that SECI has been handling, such as utility-scale and rooftop solar?

For utility-scale projects, the progress in the past one year has mostly been as expected. We have now been asked by the ministry to scale up SECI’s role in the segment. The utility-scale segment has not faced many issues in most states, barring a few. For example, in states like Karnataka and Maharashtra, developers are facing land issues and due to the steep timelines (approximately 13 months) they are not able to complete projects. The rooftop programme, on the other hand, still has unresolved conceptual issues. Theoretically, rooftop is a better alternative to large solar projects, due to inherent benefits such as fewer transmission issues and better grid balancing. But it faces three key challenges:

I expect the rooftop segment to improve within the next one year. There are a lot of players that are now competing heavily in the rooftop space. We may assume that due to increasing competition, some smaller companies may close down but at present, most players are able to canvass orders.

What is the current rooftop tariff trend?

The incentive factor that is usually provided in government tenders notwithstanding, the tariffs should be around Rs 4.50 per kWh. However, these may vary from state to state depending on the prevalent regulator regime.

Why have there not been many new tenders in the recent past?

Tenders will be released soon as they were delayed partly by the goods and services tax (GST) roll-out. SECI is likely to come up with 7,000 MW-8,000 MW of tenders in the remaining months of 2017-18.

Haryana and Telangana have good policies in place. Karnataka used to be a leader in this space, but owing to issues in its rooftop programme, the state has not been performing too well. Madhya Pradesh has taken the lead in promoting the industrial and commercial sectors, without any subsidy, by encouraging only loan-based rooftop solar systems. This has been made possible with the assistance of the State Bank of India and Punjab National Bank, which have received multilateral support from the World Bank Group and the Asian Development Bank.

What is the current solar capacity to be tendered and under construction?

Have there been payment defaults since the process of submitting bank guarantees began?

No. Since PPAs are now signed only after developers furnish their bank guarantees, developers typically stand to lose about 10 percent of the project cost. This ensures that the capacity in the pipeline is surely commissioned.

What is happening on the wind energy segment? Have PPAs been signed for the last two tenders?

The PPA signing is now complete for the first wind tender for which SECI did the bidding and PTC was the trader. For the second one, there are two agreements: the power sale agreement (PSA) and the PPA. Since the PPA is between the developer and SECI, it can be signed immediately. However, it is the PSA that has to be signed with the discoms. We expect that the signing will start by the end of November and will be completed by early December. The prices at which the power will be sold have been indicated to the discoms.

What is the plan for upcoming wind tenders?

A capacity of about 3,000-4,000 MW will be tendered in the remaining months of 2017-18. The primary issue in the wind power segment is that developers are now accepting the low renegotiated prices and then conducting reverse bidding for manufacturers. Consequently, manufacturers are left with nearly no margin because of the high competition. This will lead to consolidation, which will help improve the market.

Energy storage is an emerging area. What are SECI’s plans for this segment?

SECI would like to play a leading role in the battery energy storage system (BESS) segment. About 50 MWh of BESS has been proposed to be procured by the New Delhi Municipal Council. We are primarily interested in large-scale grid-connected storage as of now and not quite into electric vehicle-based energy storage.

What are the issues that need immediate attention in the solar power segment?

The quality of modules and other equipment is definitely an issue in the Indian solar segment. These are 25-year-long projects and it is important to ensure good performance over the project lifetime. All stakeholders have to put in place robust testing infrastructure so that poor quality is detected and faulty suppliers are identified. The Ministry of New and Renewable Energy (MNRE) has notified quality standards for solar but it has to be taken up by the Bureau of Indian Standards and the right infrastructure needs to be created. Testing is currently restricted to a few institutions like the National Institute of Solar Energy.

Lack of awareness about renewable energy continues to be a challenge as it is often viewed from an ideological angle instead of being based on hard economics. Further, grid integration issues still persist. Power Grid Corporation of India Limited has started setting up regional energy management centres and the MNRE is making efforts to provide better and transparent projections through continuously improving prediction models developed by EY.

Where do you see the renewable energy sector heading in the short and long terms? What are the likely hurdles and how will it be positioned in 2022 in terms of the energy mix?

I am optimistic about the target of 175 GW by 2022 being achieved. Due to the fall in oil prices, there is an energy surplus situation. We are unable to sell energy also in part due to the inability of discoms to pay power suppliers. So once the discoms’ financial health improves, energy consumption is also likely to increase and the increased renewable energy power injected into the grid will be absorbed easily.