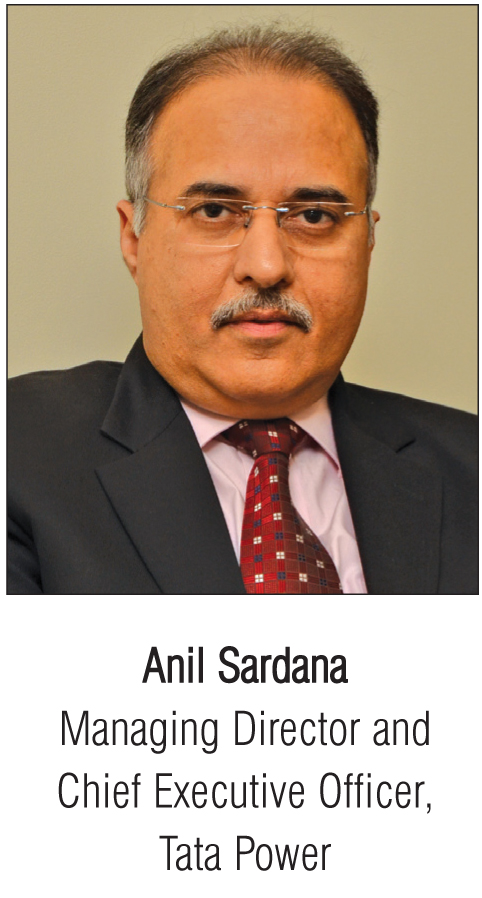 According to Anil Sardana, managing director and chief executive officer, Tata Power, the bankability of renewable energy projects has always been an issue owing to offtakers’ inability to absorb power and pay for it. Tata Power currently has one of the largest renewable energy project portfolios and, going forward, it aims to have 30-40 per cent of its capacity through clean energy sources by 2025. In an interview with Renewable Watch, Sardana shared his views on the key issues affecting the sector, the emerging opportunities and the way forward…

What have been the most noteworthy developments in the renewable energy space in 2017? What is their likely long-term impact on the sector?

The pace of activity in the renewable energy space has clearly been the silver lining in the sector that has otherwise been facing challenging times. This is primarily because of strong government support and the increasing price competitiveness of renewable power. Amongst the various developments that have taken place in the solar and wind power segments this year, the ones that would have a long-term impact on the power sector are:

In your opinion, will the change in management at the Ministry of New and Renewable Energy (with a new minister and a new secretary) impact the pace of decision-making?

The government is committed to green energy and is transitioning towards a renewable-focused economy. The new minister and secretary share the same vision and are doing everything needed to expedite renewable capacity build-up and removing the difficulties being encountered by developers and manufacturers.

What is the current financing situation for utility-scale solar and wind projects in India? Can you highlight the major risks for investors in this space?

Around 293 global and domestic companies have committed to generate 266 GW of solar, wind, mini hydel and biomass-based power in India over the next 5–10 years. The initiative would entail an investment of $310 billion–$350 billion. For instance, the International Finance Corporation, the investment arm of the World Bank Group, is planning to invest about $6 billion by 2022 in several sustainable and renewable energy programmes in India. The Indian power sector has an investment potential of Rs 15 trillion over the next four to five years, which indicates immense opportunities in power generation, distribution, transmission and equipment. While there is plenty of capital chasing the opportunities in the renewable sector, there are several risks that need to be kept in view, including counterparty risks both in terms of developers and procurers.

How do you see the role of storage solutions in the context of renewable energy? What are Tata Power’s plans in the area of energy storage?

The renewable energy storage system market in India is at a nascent stage. The market is expected to witness robust growth, perhaps in the next 5-10 years, once the cost of storage declines, which is likely to happen because of the sheer volume growth through the electric vehicle route.

Energy storage has now become a complementary solution for renewable energy, which is seasonal and intermittent. The challenge is to ensure that there is 24×7, robust supply of energy. The thrust on solar and wind projects has increased the challenges in maintaining system stability, which is encouraging developers to support power grid networks with battery storage to help manage the variations in power supply. Renewable energy projects backed with battery technology could transform the energy scenario in India. However, the challenge is to develop a technology that is suitable for large renewable energy projects. As per industry reports, the deployment of energy storage is anticipated to grow over 40 per cent annually in the next 10 years, with around 80 GW of additional storage capacity. Tata Power has undertaken proof-of-concept in battery energy storage systems, wherein large lithium-ion battery banks are being deployed in Delhi.

What should be done to address the challenges/risks pertaining to the renegotiation of existing power purchase agreements (PPAs), especially in the wind power space?

One of the key concerns plaguing the renewable energy sector is the delay in the signing or non-signing of new PPAs and reneging on old PPAs. Bankability of renewable energy projects has always been an issue in India, owing to off-takers’ inability to absorb power and pay for it. We have also seen that the renewable energy certificate mechanism did not take off as expected. So, the PPA structure needs to be strengthened to make renewable energy projects more bankable. There are states which, owing to their fiscal challenges, are not encouraging the must-run status of renewables and are forcing such capacities to back down when wind velocities are favourable. The government must, therefore, enforce must-run status as an obligation for all consumers to buy a good proportion of clean and green power.

What have been Tata Power’s key achievements in the renewable energy sector in the past year? What is the energy mix that the company is targeting, going forward?

With a gross generation capacity of 3,210 MW through clean non-fossil sources, Tata Power is one of India’s largest renewable energy players. The company’s renewable portfolio in India registered a healthy profit of Rs 1.73 billion in the second quarter of 2017-18, a 101 per cent increase over the corresponding period in 2016-17. In line with the government’s objective of promoting renewable energy, Tata Power has a well-defined growth plan and is working towards achieving the same. The company aims to build a total capacity of 20,000 MW by 2025, of which 30-40 per cent of its portfolio would be based on non-fossil fuel. In 2016-17, we added about 1,400 MW of capacity. We have various projects in the pipeline.

Tata Power Renewable Energy Limited (TPREL) has emerged as one of the leading independent power producers (IPPs) in India. Does the company have any plans for consolidation or capital market listing?

TPREL is, at present, is in the consolidation phase and has to stay focused on operating its assets well and also grow its portfolio to maintain its market share.

What are the other key unaddressed challenges of IPPs that need to be resolved at the earliest? What are the possible solutions?

The private sector participated aggressively in the capacity addition programme due to the fast-paced developments in the sector and eventually landed up with all the capacity not being absorbed. The key challenges faced by power producers are high fuel supply risk, time overruns at plants, and the limited paying capacity of the financially weak distribution utilities. Power producers are facing delays in payments, which are sometimes as much as a year, from state-run power distribution companies. Some IPPs are also locked in PPAs that have become unviable. High exposure to offtaker risk and fuel shortages are some of the other challenges that are concerning IPPs.