A solar-rich state, Punjab houses one of the largest solar plants in the world on a single rooftop. The state receives ample sunshine, enough to meet

a large part of its electricity needs through solar energy. As per the Ministry of New and Renewable Energy estimates, the state’s cumulative solar potential stands at 4.8 GW, of which rooftop solar accounts for 2 GW and ground-mounted solar for the remaining capacity. The state government has been making efforts to leverage the high solar insolation, estimated at 4-7 kWh per square metre, to contribute to India’s renewable energy targets.

Punjab saw a sharp increase in its solar capacity, from a meagre 9 MW in February 2012 to 1,168.6 MW in September 2017. This has been made possible largely due to the state’s solar energy policy, which was rolled out in 2012, offering several incentives and exemptions to solar power developers. In addition, Punjab has a well-developed infrastructure, a well-connected intra-state transmission system and an enabling policy framework. Together, these create a favourable investment climate in the state.

As of September 31, 2017, the state’s total installed power capacity stood at 14,167.6 GW. Between April and August 2017, Punjab was one of the few states that were able to meet 100 per cent of their load demand. However, renewable energy occupied a mere 8 per cent share in the total installed capacity.

In the utility-scale solar segment, about 816 MW of solar capacity has been installed in the state as of September 2017. In addition, projects amounting to 210 MW are in the pipeline.

Some of the recent developments in the state’s solar segment are a 6 MW solar tender floated by Military Engineering Services in Bhatinda, a 50 MW solar power plant commissioned by Hindustan Power, and 20 MW of canal rooftop projects allotted to the Punjab Energy Development Agency under the government’s canal-top programme. In addition, IDFC Alternatives has announced plans to refinance two solar projects in Punjab acquired from Punj Lloyd, for which a part of the Rs 2.5 billion funds recently raised by the company would be used.

Capacity addition in the state’s rooftop solar segment is yet to gain momentum. As of March 31, 2017, Punjab had an installed rooftop solar capacity of 66 MW, or 8 per cent of the total solar capacity. The commercial sector occupied the largest share with 73 per cent, followed by the industrial and public sectors at 15 per cent and 12 per cent respectively.

In May 2016, the world’s largest solar plant on a single rooftop was inaugurated near Amritsar in Punjab, which piqued the interest of the international solar market. With an installed capacity of 11.5 MW on a single rooftop, the plant is also India’s largest rooftop solar plant on multiple roofs with 19.5 MW of capacity. The entire project is spread over eight roofs, covering an area of 82 acres. The project was developed jointly by Tata Solar and Larsen & Toubro and uses a total of 46,164 polycrystalline modules procured from Canadian Solar and C-Sun. It is estimated to help displace 0.4 million tonnes of carbon dioxide emissions in the next 25 years by generating around 675 MUs of electricity over its lifetime. 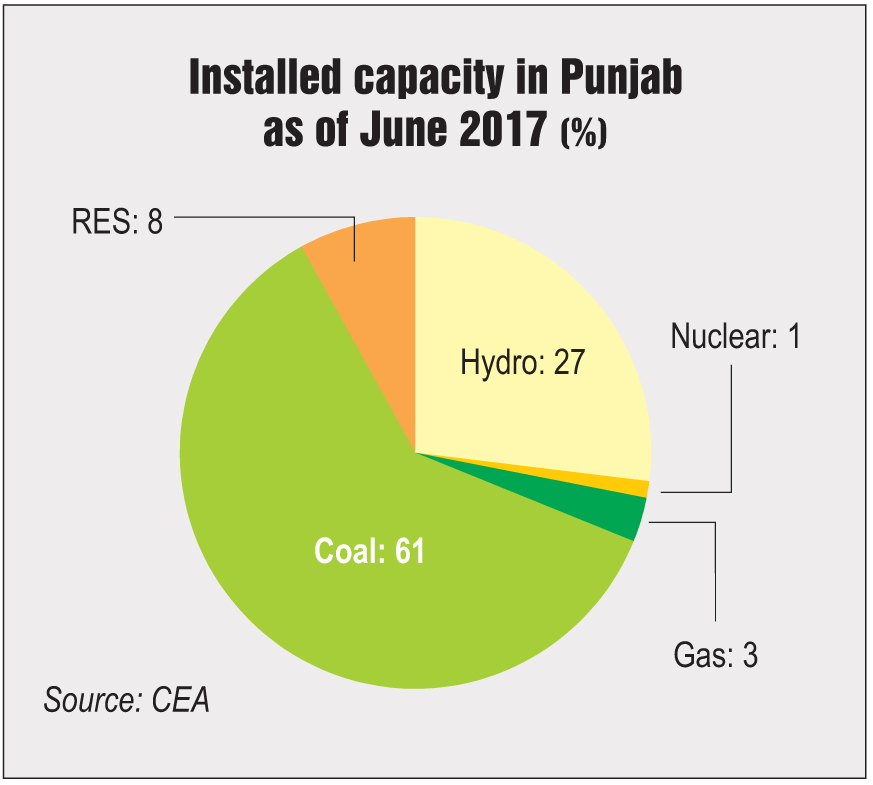 Punjab also has India’s largest solar photovoltaic plant based on tracking technology. It was installed in the state in 2016 by Adani Power using NEXTracker technology. The project, spread over 641 acres, is located in Bhatinda and has a capacity of 105 MW. Horizontal single-axis tracking systems are used to increase the plant’s output by 10-15 per cent. The power is evacuated through the 132 kV double circuit transmission lines that are connected to the state transmission utility.

Punjab is amongst the few states that have been notifying tariffs for biomass every year. The Central Electricity Regulatory Commission (CERC) determined a tariff of Rs 8.03 per kWh for 2016-17, which is reduced to Rs 7.85 per kWh upon adjusting the accelerated depreciation (AD) benefit. The state electricity regulatory commission on the other hand released a tariff of Rs 7.53 per kWh and Rs 7.35 per kWh with and without AD respectively. The tariff of Rs 6.27 per kWh without AD and Rs 6.06 per kWh with AD can be availed of for bagasse-based cogeneration projects, as per the CERC guidelines.

Despite having a high potential in the state, the biomass segment has not taken off due to fuel supply issues. This is because the availability of raw material for bioenergy is seasonal. Raw material can only be made available for only two to three months after each harvesting period. Waste from different crops is available in different seasons, leading to inconsistency in the composition of feedstock. Moreover, transport of the raw materials over long distances can be a difficult task resulting in increased fuel costs. Another factor contributing to higher fuel costs is the processing of biomass for storage as well as for feeding into the furnace.

Another issue plaguing the sector is the absence of long-term supply agreements between farmers and project developers. The viability of projects is affected by cost inefficiencies as signing contracts with farmers requires engaging middlemen for feedstock procurement. Bioenergy developers are facing competition from industries such as brick, cement and oil manufacturing, which have switched from oil and coal to biomass for fuel. This has driven the prices of feedstock upwards. 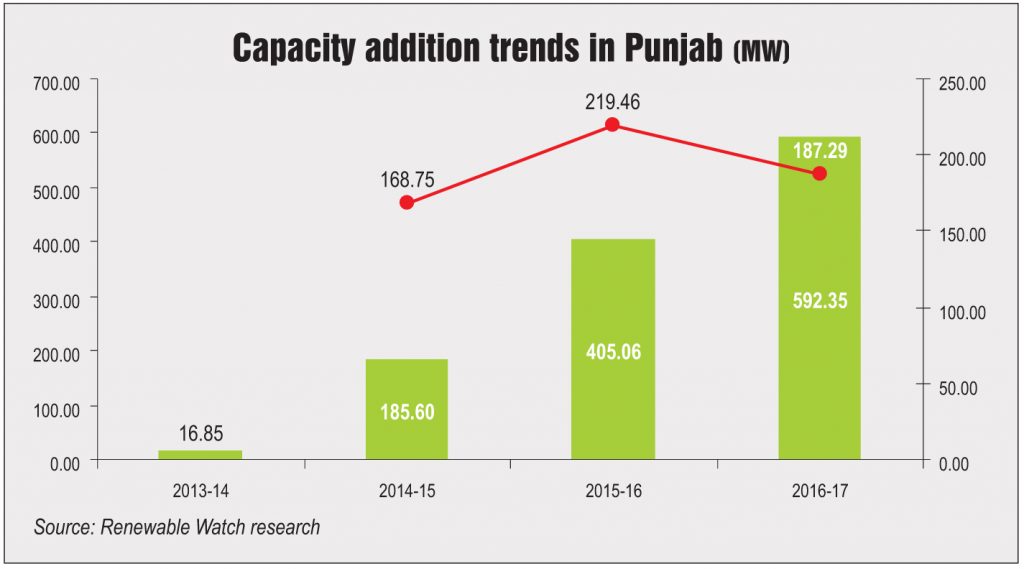 The state has set a renewable purchase obligation (RPO) target of 4.1 per cent for solar and 1.3 per cent for non-solar energy. Punjab recorded RPO compliance of 67.2 per cent in 2015-16 and improved it to 85.5 per cent in 2016-17. Although RPO compliance has been fairly good in the state so far, the trend seems to be changing as the discoms are running into losses. Moreover, the increase in renewable capacity addition targets would require large investments in the state’s solar energy segment. By 2018-19, around 1.6 GW of installed solar capacity would be required by Punjab to meet its RPO.

Punjab State Power Corporation Limited has had a good payment track record in the past, testified by the latest A+ rating awarded by the Third Annual Integrated Ratings of State Power Distribution Utilities. However, the discom recently suffered heavy losses. As a result, the state discom joined the Ujwal Discom Assurance Yojana (UDAY) in March 2016, under which it is entitled to receive an estimated benefit of Rs 54,750 million. Meanwhile, the Punjab government has agreed to take over Rs 156,280 million of the discom’s debt, approximately 75 per cent of the total outstanding debt of Rs 208,380 million as of September 30, 2015. The state holds the tenth position in the UDAY quarterly performance rankings. Further, Punjab still suffers from high aggregate technical and commercial losses, which currently stand at 19.22 per cent. These are, however, much lower than the national average of 25.37 per cent. On the other hand, the average cost of supply-aggregate revenue requirement gap in the state is Re 0.55 per unit, which is much higher than the national average of Re 0.26 per unit.

Despite a vast potential and favourable government policies, solar power segment has not achieved the desired growth in the state. While utility-scale solar projects are gaining momentum in the state, rooftop solar installations account for only 4.2 per cent of the total rooftop capacity in the country. The segment needs to pick up pace to achieve the specified targets. The residential rooftop segment remains largely undeveloped due to the low cost of discom electricity. Moreover, the impact of renewable energy open access is yet to be seen in the state. At present, there is no wind energy generation potential in the state even at a hub height of 100 metres. Bioenergy is expected to emerge as the second largest renewable energy technology in the state after solar.