With the fall in tariffs, there is pressure on developers to reduce the capital cost and gestation period of solar power plants. At par in importance with modules, balance of system (BoS) has seen a price trend in tandem with the decreasing solar module prices. Within BoS, inverters are one of the most important components of a solar power plant. They are essential for deciding critical factors such as transformer rating, along with the rest of the system.

Inverters are responsible for a large part of BoS costs. However, technological advancement has been able to bring down costs. Modular inverters have helped improve the economics of the system considerably. This technology typically includes a number of modules within one inverter, akin to multiple string inverters connected to a central inverter. Each of these modules has independent components such as capacitors and inductors, which allow the inverter to function in the event of any component failure.

The new design takes into account and attempts to solve the common problems associated with inverters. For instance, regulations in Karnataka and Madhya Pradesh penalise operators for reactive losses in the system, such as no-load losses of transformers during night-time when the solar plant does not generate electricity. The capacitors in these inverters are there to provide compensatory reactive power in lieu of the losses of transformers.

Also, the number of modules functional within the inverter at any given point in time is dependent on the irradiation recorded by the system. Therefore, in the morning, the inverter starts with only one module and the number of active modules increases as the sun charts its trajectory through the day.

A monolithic inverter requires 25-30 per cent power to enter the high efficiency zone, that is, about 250 kW-300 kW for a 1,000 kW inverter. However, in the case of modular inverters that have 10 modules of 100 kW each, the power required to reach the high efficiency zone for one module would be only 25 kW. This makes a considerable difference, considering that at a given point in time only some of the modules will be functional. Also, after operating for a certain period of time during the day, there is a decrease in the efficiency of the inverter. While each module follows a similar efficiency pattern, multiple modules keep the efficiency of the complete inverter system high. A dip in efficiency is experienced only with the decrease in efficiency of the last module.

As modules operate independently and according to the irradiation received by the system, there is reduction in the wear and tear of modules that helps reduce operations and maintenance costs in a solar power plant. In order to make the inverter more efficient, modules start operating according to their remaining lifespan – the least used module is the first one to start in the morning. This also helps relieve stress on the electronic components of the inverter, enhancing its life.

One of the most significant advantages of using modular inverters is that the inverter is never completely off. Even if one module stops functioning, the others will continue to work as usual. In the case of solar power plants, only about 80 per cent of the inverter is utilised for nearly two-thirds of the day, thereby allowing two of the 10 modules to function as backups.

Inverters have fixed as well as variable cost components. While busbars, cabinets and other components constitute the fixed cost, variable costs are determined by the number of modules. However, there is a limit to how many modules can be added to the inverter. More modules will result in higher current, which will lead to a drop in voltage.

With the increased adoption of solar power plants in the country, the number of inverters sold is increasing. This, coupled with technological advancements, has resulted in a decline in inverter prices. Moving forward, the inverter technology is expected to become more sophisticated as the adoption of string and modular inverters is likely to grow significantly. 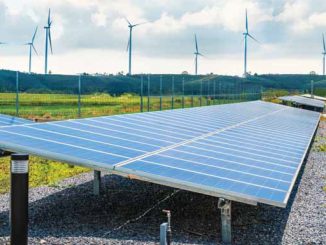 September 8, 2021
The Department of Atomic Energy (DAE) has floated a tender for a 1.73 MW grid-connected solar project at the Indira Gandhi Center for Atomic Research ...
More