The rooftop solar market in India has been gaining traction in recent years, with the segment reaching a total installed capacity of 1,020 MW as of September 2016. In line with the target of achieving 40 GW of rooftop solar photovoltaic (PV) capacity by 2022, the Solar Energy Corporation of India recently issued a tender for the development of 1,000 MW of rooftop solar capacity on pre-identified central government/department-owned buildings. This comes after the results of a 500 MW rooftop tender were announced in November 2016. Such large-scale tenders will provide the required momentum for segment growth. This also shows the immense growth potential of the segment in the coming years.

For equipment manufacturers, this translates into new opportunities. In order to meet the requirements of kW-scale rooftop solar systems, manufacturers need to modify and fine-tune the equipment used in MW-scale plants. Of all the components, modules and inverters together account for up to 75 per cent of the total project cost, emphasising the critical nature of these components. While modules have long been a subject of research, inverters, the second most important component of a plant, are also now being focused on.

Inverters are also known as power conditioning units (PCUs) and convert direct current generated from the panels to alternating current to feed into the grid at the required frequency. Inverter technologies may be broadly categorised into three configurations – central, string and micro. Each of these configurations has its own pros and cons. Although central inverters entail a lower capital cost per watt and lower maintenance cost, they face issues related to lower energy outputs, size, noise and  single point of failure of the entire system. Meanwhile, string inverter and microinverter configurations offer higher power conversion efficiencies owing to multiple power point trackers. However, they also entail higher costs.

The industry has witnessed a reduction in inverter prices and an increase in their efficiency over time. As per the Central Electricity Regulatory Commission’s benchmark capital cost for solar PV projects, the cost of PCUs has reduced from Rs 6 million per MW in 2014-15 to a little over half at Rs 3.5 million per MW in 2016-17.

As per BRIDGE TO INDIA, prices in the rooftop solar market vary widely, from $0.07 to $0.17 per watt depending on the order size, specifications and brand. 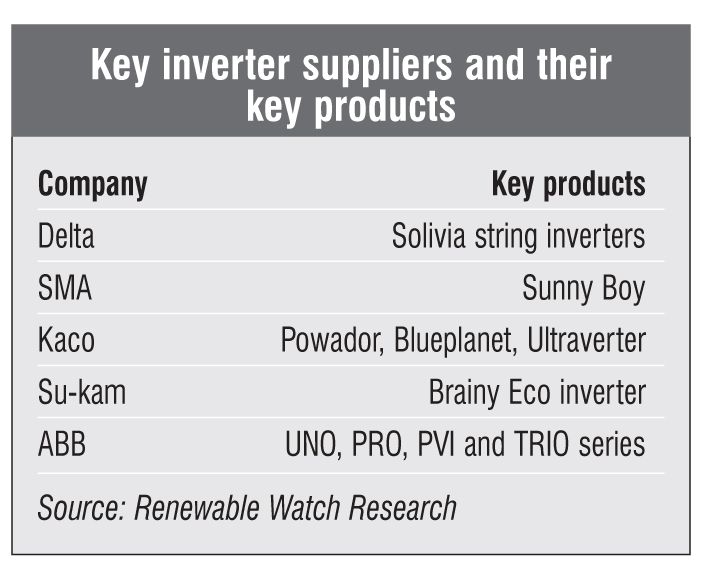 The rooftop solar segment includes commercial, industrial and residential installations. The higher tariffs for the first two categories, the increasing awareness regarding the use of sustainable energy sources such as solar, and the government’s push have been the key factors for the growth in installed capacity in the segment. On account of the size constraints on building rooftops, these projects are generally small in capacity. For instance, the largest single rooftop PV installation so far is an 11.5 MW system at the Dera Baba Jaimal Singh campus in Punjab.

The most commonly used inverters in this segment are string inverters because of the way they are connected to the modules. In string inverters, an array of modules is connected to the inverter, unlike in central inverters where all the modules are connected to a single inverter. This ensures that any fault in one array of modules does not affect the functioning of the entire system and is resolved at the string level itself. Therefore, as compared to power plants with centralised inverter solutions, plants with string inverters have advantages such as better electricity yield, lower area requirement, no additional room required for equipment, more reliable operations, and simpler operations and maintenance (O&M). In addition, residential rooftops generally cannot support central inverters.

Microinverters, used widely in western countries, are also a good option for rooftop solar PV projects. Since each module is connected to a single inverter, any fault can be resolved at the module level, providing a better performance and enhanced productivity. Further, these inverters are much more intelligent as compared to their counterparts. However, they have not been widely commercialised yet in India because of their high cost.

As the inverters generally dissipate heat through natural or air cooling, manufacturers add external fans to string inverters to increase their heat dissipation capability. Since string inverters are normally used in harsh environments, manufacturers need to ensure the protection  of external fans. However, while executing this, the heat dissipation of the equipment reduces. In case the fan fails to work, the heat dissipation capability is badly affected, thereby reducing the power output and electricity yield. Besides, the life cycle of fans is shortened significantly because they are exposed to rain, dust and other corrosive elements for years. Therefore, the fans need to be replaced several times during the inverter’s life cycle, resulting in high O&M costs.

This problem can be partly solved by including copper and aluminium composites, heat pipes and temperature equalisation plates in order to reduce thermal resistance and improve the dissipation capability of radiators or by adding a fan in the cavity to cool hot spots inside and improve the heat dissipation capability. Since the fan is located inside the cavity, it does not require any additional protection. However, the no-external fan design of string inverters still remains a challenge. 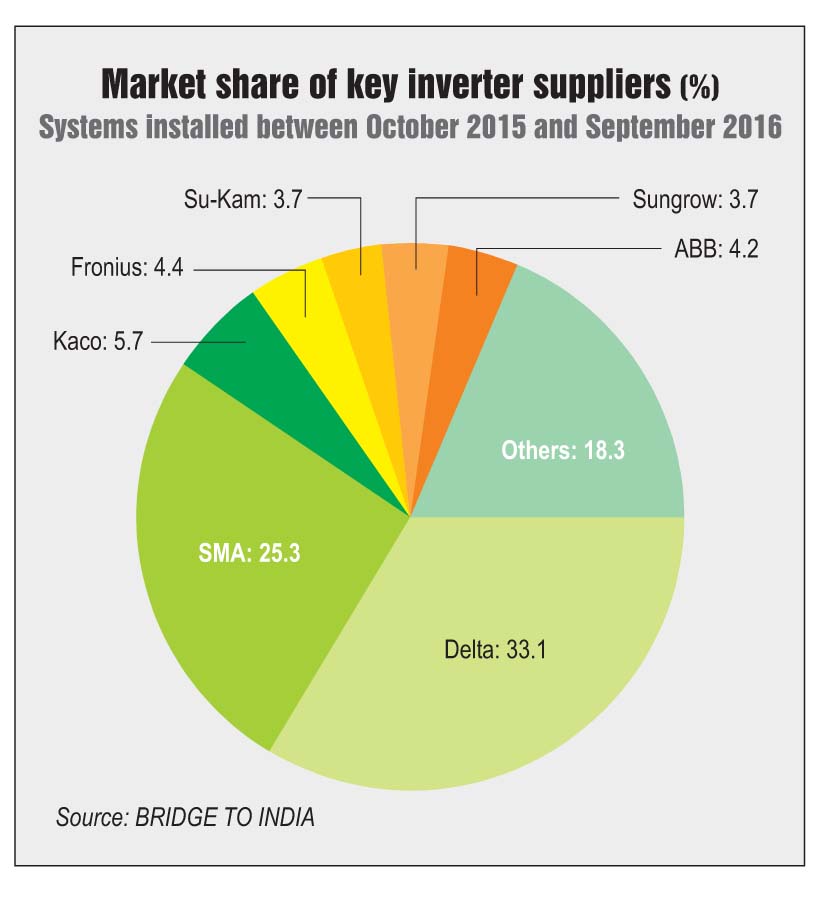 The rooftop solar market in India is expected to grow at a significant 70-80 per cent over the next few years and there is immense scope for new companies to enter the segment. In addition, the implementation of the goods and services tax is likely to improve the cost competitiveness of imported inverters as it is likely to make the tax regime simpler.

India has been facing an acute power shortage, which is expected to continue over the next few years, considering the rising power requirements. Moreover, there is a huge government impetus to renewable energy, especially solar power, and the announcement of draft or final net metering policies by around 27 states and all union territories. These are likely to fuel the growth of the rooftop segment. In light of these factors, the market for solar inverters is expected to grow at significant pace in the coming years. According to Ken Research, the market for solar inverters in India is projected to increase at a compound annual growth rate of 76.9 per cent during 2016-20. While large ground-mounted solar PV projects will account for significant market share, the rooftop solar segment will inevitably see a huge increase in its market share.