Andhra Pradesh has undergone a remarkable transformation by eliminating power deficit. The progress can be attributed to the state government’s pioneering role in implementing power sector reforms, ensuring a strong and stable policy framework and facilitating large-scale development of the state’s renewable energy sector. In an interview with Renewable Watch, Ajay Jain, principal secretary, Energy, Infrastructure and Investment Department, Government of Andhra Pradesh, talks about the state’s renewable energy policy framework, the initiatives being taken to promote sector development and the challenges faced by the government and the industry. Excerpts…

What have been the key achievements in the state’s renewable energy sector in the past one year?

Four large solar parks with a total capacity of 4,000 MW are being developed in Anantapur, Kurnool and Kadapa districts. To this end, 250 MW of solar power capacity has been commissioned in the Ananthapuram solar park. Moreover, the world’s largest solar park of 1,000 MW in Kurnool is likely to be commissioned by April 2017. The state has also signed an MoU with Suzlon Energy and the Axis Energy Group for setting up 4,000 MW renewable power, including 1,000 MW of solar-wind hybrid projects and manufacturing facilities. Further, several MoUs were signed by the state government with prospective investors that led to an investment of Rs 884.82 billion. The state also installed the highest number of solar pumpsets during 2015-16.

Andhra Pradesh is the first state in the country that has implemented the 1 MW canal top solar power project under the Pilot Demonstration Scheme of the Ministry of New and Renewable Energy (MNRE). The state also conducted competitive bidding for setting up waste-to-energy plants with an aggregate capacity of 63 MW at 10 locations.

What initiatives is the state likely to take next year for developing the sector?

During 2016-17, 1,000 MW of wind power and 1,000 MW of solar power projects are likely to be developed. Further, the installation of 10,000 solar pumpsets for the benefit of farmers has been proposed. The state government has signed an MoU with leading players in the industry to promote renewable energy. To this end, manufacturing facilities for wind turbine generator components are being set up by Suzlon Energy Limited and Gamesa Wind turbines. Several steps have also been initiated to establish the National Renewable Energy University in Ananthapuram district. Moreover, the state load despatch centre of Andhra Pradesh is establishing a Renewable Energy Management Centre equipped with forecasting tools, smart despatching solutions and real-time monitoring to integrate large-scale renewable energy into the grid.

What are the state’s RPO targets for solar as well as non-solar segments? What is the status of RPO compliance in the state?

The current renewable purchase obligation (RPO) for the state is 5 per cent including a solar RPO of 0.25 per cent as per the Andhra Pradesh Electricity Regulatory Commission (APERC) Regulation, 2012. APERC has issued a draft regulation for modifying the RPO in line with the one issued by the Ministry of Power.  The RPO achieved by the state during 2015-16 was 5.01 per cent and it is expected to achieve an RPO of 10.78 per cent in 2016-17. In the coming years, the state is expected to exceed its RPO targets owing to the large capacity additions happening in the wind and solar power segments. 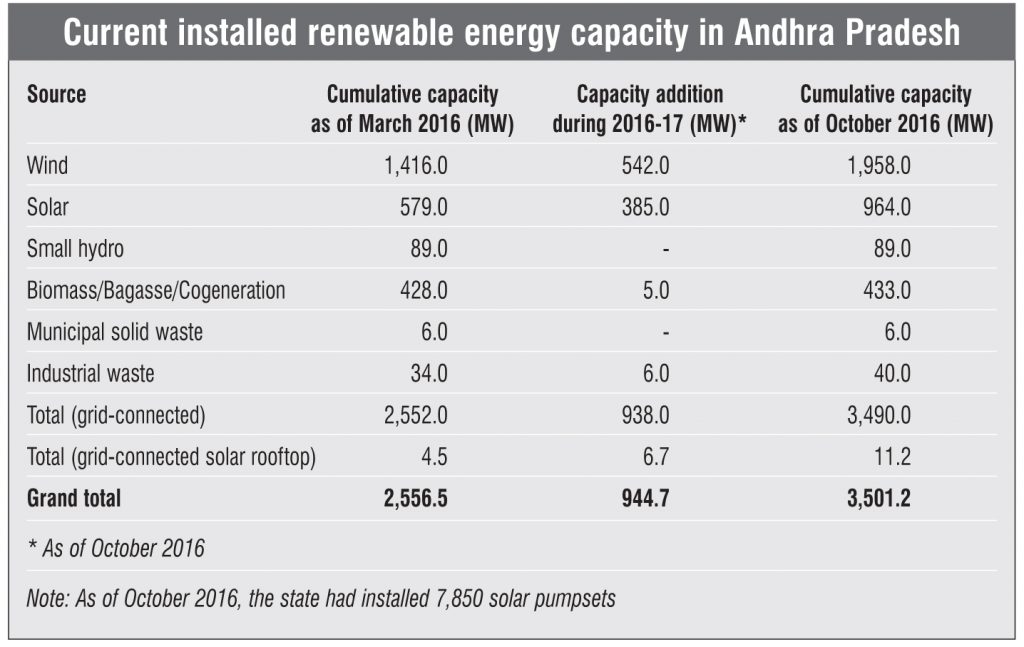 How is the state planning to exploit the solar-wind hybrid power potential?

The state nodal agency, New and Renewable Energy Development Corporation of Andhra Pradesh, has already floated the draft policy for wind-solar hybrid technology and invited views from all the stakeholders. The policy aims to enable the development of wind-solar hybrid projects that can help optimally utilise the transmission infrastructure and contribute towards grid stability.

The state government has also signed an MoU with Axis Energy Group and Suzlon Energy to set up 1,000 MW of hybrid power plants.

What are the key issues and challenges faced in the development of renewable energy in the state?

Andhra Pradesh is now in a power surplus situation. With rising share of renewable energy in the state’s energy mix, the plant load factor of conventional power plants is on the decline. While renewable power has seen cost reductions in the past few years, it is important for the cost reduction trajectory to continue to enable the deployment of both solar and wind power plants in an economical manner.

What is the update on the Green Energy Corridors project in the state? What other initiatives are being planned to improve the transmission and evacuation infrastructure?

Besides APTRANSCO, these projects are being funded by Rural Electrification Corporation Limited, KfW development bank and MNRE. While Phase I is completed, a tender of Rs 3.34 billion has been floated for Phase II. Under the inter-state transmission system (ISTS), power evacuation infrastructure is being created for the evacuation of 1,500 MW solar power in the ultra mega solar park being developed in Ananthapuram. Of this, 250 MW solar capacity has been commissioned this year and the rest will be commissioned in 2017.

What are the state’s long-term plans for the renewable energy sector? What are the segment-wise targets for the next three years?