Until recently, a large part of the population in many parts of the country still centred their activities from sunrise to sunset, as there was no electricity in their villages. However, with improving economy, technology, accessibility and administrative thrust, such remote regions are rapidly emerging out of darkness into light. Off-grid solutions have played a significant role in making lives in the remote areas easier, brighter and economically more inclusive in the mainstream development of the country. From lighting to pumping and cooking to heating, off-grid solutions are being used for nearly most of the commercial, industrial and residential applications in the areas that are yet to access the electric grid connectivity of the country.

Off-grid solutions provide a financially sound alternative to the limited grid-connected power that is unable to reach areas which are geographically remote or in difficult terrains and/or have low population density that makes grid connection economically unfeasible. Given the potential and the government’s aggressive focus on renewable power generation, the off-grid renewable energy segment has been given a new lease of life in recent times.

This segment has a significant market potential, considering estimates that there are nearly 80 million powerless households in the country. The government and the private sector intervened to take up the cause of powering the unconnected areas in the country. Multiple policies have since been introduced and implemented by the government for various technologies, from solar to wind hybrids to biogas and small hydro.

As part of the government’s efforts to provide sustainable solutions to remote areas, all sources of power generation are being promoted through clearly laid out targets and constant monitoring of the schemes implemented to that effect.

Under the Jawaharlal Nehru National Solar Mission (JNNSM), the government aims to install 3,200 MW of off-grid solar systems by 2022 in three phases. Under Phase I (2010-13), the government installed 68.4 MW of off-grid solar technologies, whereas during the ongoing Phase II, against a target of 100 MW, 48.13 MW has already been installed, bringing the cumulative solar photovoltaic off-grid capacity to 361.98 MW.

To this effect, the Ministry of New and Renewable Energy (MNRE) launched the Solar Pumping Programme for Irrigation and Drinking Water Scheme under which the government aims to install a million pumps by 2020-21. Over 62,000 solar pumps currently operate in the country, with more than 50 per cent of these installed in the past one year, including 14,000 pumps sold under the MNRE scheme. Heavy subsidies are provided to encourage the installation of the technology, with only 5 per cent-20 per cent of the cost of the pump being borne by the user, the rest being divided between the state and the central government agencies. Subsidies are an important part of the solar pump market, given the high cost of the equipment – a 3-5 horsepower pump costs Rs 500,000-Rs 700,000. Compared to this, a diesel pump with the same specifications costs merely Rs 30,000 to Rs 50,000, making it financially preferable, despite its operational cost being higher. Therefore, the subsidy programme for solar pumps assumes greater significance for their deeper penetration. 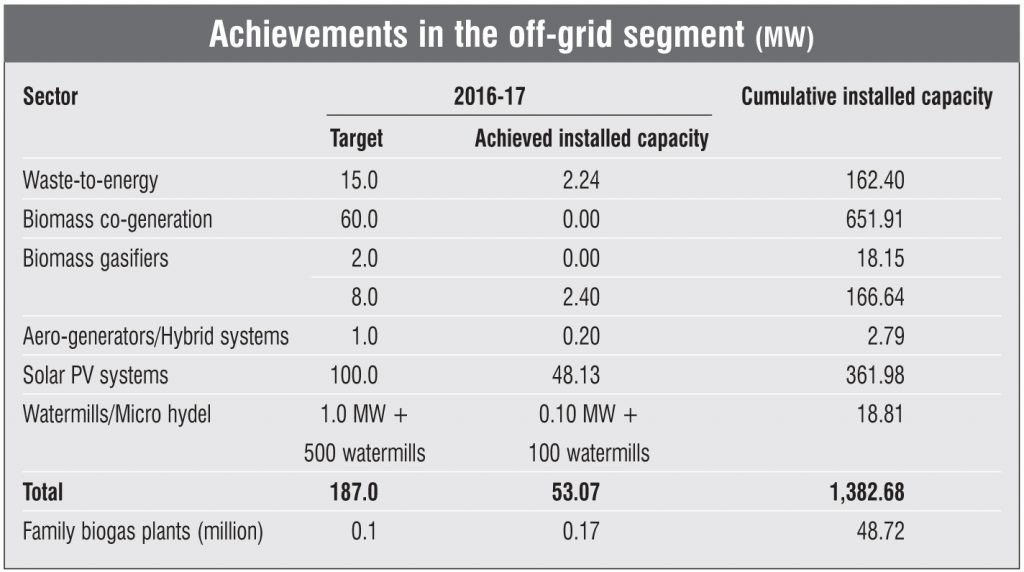 Challenges and the future

Despite an increasing need for off-grid solutions, policymakers often keep this segment at the end of their priority list, overshadowed by grid-connected systems and programmes aimed at power transmission and evacuation networks. The role of this segment in the “Power for All” programme by various states is still ambiguous and policies unclear to further the adoption of these systems.

One of the key challenges remains financing and achieving economies of scale. Most companies in the off-grid segment are still in the growth stage, with limited manufacturing capabilities. To enable larger manufacturing, greater funds are required and more profitability is needed, which will come only from scaling up of operations. The segment is often found embroiled in a vicious cycle, preventing focused progress.

The removal of subsidies from maturing markets within this segment would allow for better fund allocation to the emerging markets. Greater policy-based collaboration between off-grid developers and the government will enable the adoption of technologies, allowing companies to reach economies of scale that will further reduce costs. Off-grid technology also has considerable advantages to be developed into a parallel means of harnessing renewable sources of energy, while also ensuring sustainable power for off-grid areas.