We bring you an interview with Piyush Goyal, Former Minister of State (Independent Charge) for Power, Coal and Renewable Energyfrom our 2015 archives 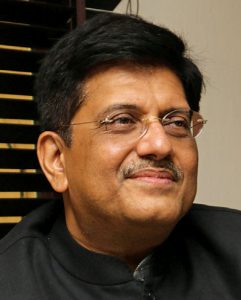 Having inherited a crisis-ridden sector, the Minister of State (Independent Charge) for Power, Coal and Renewable Energy, Piyush Goyal has been working at a brisk pace to tackle some of the most pressing issues. The multi-billion dollar investment commitments elicited for renewables at RE-Invest 2015, and the launch of two mega schemes to overhaul the distribution segment have been some of his major moves. In a recent interaction with Renewable Watch at the Ministry of New and Renewable Energy’s Lodhi Road office in New Delhi, Goyal answered wide-ranging questions in his inimitable, articulate style, while outlining his vision for the sector and reflecting on the key issues before it. Excerpts…

With the government having been in power for almost 10 months now, what has been the biggest source of satisfaction for you in terms of progress made?

The most important change that has happened is that we have brought confidence back into the power sector. If you recall, a year ago, no investor was looking at putting money into this sector, and banks were reluctant to lend. There was a sense of gloom and doom. Therefore, the most critical work for me in the first few months was to bring back the confidence that this sector is going to flourish; that it is going to meet our goal of sup- plying 24×7 power to every Indian and make the country free of diesel gensets by providing afford- able, high quality and environment-friendly power. It is this holistic view of the sector that has been most appreciated both in India and abroad, and brought the confidence back. Developers know that they can get adequate fuel to run their plants. Many stranded projects are coming into operation. Funding is once again coming into the sector. In fact, there is now a rush to buy power assets. This was not the case a year ago.

There is also a renewed thrust on renewables. So far, this sector has been able to add about 3,000 MW of solar power capacity and a few hundred megawatts of waste-to-energy projects. The 28 GW of wind power capacity is the only solace we have. Not that I am resting on any laurels, but the first 10 months only encourage me to work harder because there is a huge potential in the sector.

When can we expect investments to start flowing into the sector?

At the recently concluded RE-Invest 2015, wereceived an investment commitment for around 270 GW of renewable energy capacity. In addition, we received a commitment for financing nearly 70 GW of capacity from bankers.

My bigger thrust in the conventional power segment is on the transmission and distribution (T&D) segment. I want to make sure that the power currently being generated becomes more efficient. So, we need to supply more fuel to stranded or under-utilised plants in order to bring down their costs as well as reduce the stress on the banking sector. My estimate is that we can produce at least 1.6 times more power than that produced today with the current assets, provided we ensure adequate fuel supply, T&D systems for power evacuation, and the signing of power purchase agreements (PPAs) by discoms.

Having said that, I will need to start planning for the next phase, to ensure a future pipeline of projects. We have announced five ultra mega power projects (UMPPs) in the “plug and play” mode. We are looking at more efficient utilisation of coal by linking coal mines with power plants that are closest to mine pitheads in order to bring down the overall cost of power. Ideally, the people of India need to be given affordable power; you cannot load system inefficiencies onto consumers.

What is the way out of the distribution mess?

The prime minister has guided me a lot on the subject. I went to Gujarat in the first couple of weeks of assuming office to understand how innovatively they have been able to resolve thesub-transmission and distribution problem and how they have been able to convert loss-making utilities to profit-making ones in a very short span of time without any massive increases in tariff. In the 12 years of Mr Narendra Modi’s tenure as chief minister of Gujarat, the state witnessed the lowest tariff increase compared to any other large state in the country.

We have launched two schemes for the distribution segment: the Deendayal Upadhyaya Gram Jyoti Yojana (DDUGJY) and the Integrated Power Development Scheme (IPDS). The central government is almost fully funding these programmes, with the state’s share at only about 10 per cent in the larger states and about 5 per cent in the north-eastern and hill states. Also, nearly 60 per cent of the funding will be as a grant. Only 30 per cent will be the loan component, of which 50 per cent is eligible to be converted into a grant if utilities do a good job in execution.

What is your view on the financial restructuring package that was offered to discoms?

The financial restructuring plan has been a failure. It only gave direction to convert short-term loans into long-term ones, thereby giving headroom to borrow further in the short term. Even for that, it did not provide any special dispensation in fiscal responsibility and the budget management targets of the state. As a result, some states converted a part of their working capital loan to a long-term loan without any significant reduction in the interest cost. Most of the debt continued to remain non- sovereign or non-state guaranteed debt. The scheme was finalised in April 2012 and operationalised much later in October 2013. During this one-and-a-half-year period, the states’ finances went for a toss and their accumulated losses increased further.

What are your distribution segment goals?

We have an investment target of Rs 50 billion for transmission, sub-transmission and distribution. Of this, around Rs 18 billion will be through the DDUGJY and IPDS schemes. We have already given out contracts worth $6 billion-$7 billion for transmissionlines, which includes around $2 billion for the north-eastern region and around $4 billion for a transmission line that will transmit nearly 6,000 MW of power to south India. We are aggressively expanding the trans- mission grid in order to make the national grid seamless and strong.

What are your goals for reducing the operating losses of discoms?

There is no one-size-fits-all approach. Each state has its own dimensions. We are working with each state to achieve 24×7 power for all. Simultaneously, we are working with them to upgrade their distribution network and improve their finances. It is a holistic plan for each state.

Is it realistic to expect capacity addition in the hydropower segment to revive during the next few years?

There are several issues with the hydro segment, particularly those relating to environmental clearances and other judicial matters. There are various court cases under way; however, being subjudice, I cannot speak much about it. Until judicial conflicts and issues pertaining to environmental approvals are resolved, I see the hydro segment remaining under severe constraints.

What changes can we expect in the bidding process for UMPPs this time around?

There is a committee that is currently working on recommendations to ensure that these projects are more robust and the contracts signed for them are more bankable. The report of the committee is awaited to ensure that we do not have a mess like we had in earlier rounds. The first round of bidding for UMPPs started off well, but only two projects finally came on track. Of those two, there is stress in one owing to tariff issues. The second round of bidding was almost a non- starter. I want to try and make it have a far more sustainable framework.

When can we expect a detailed scale-up plan for achieving the target of 175 GW of renewable energy by 2022? How do you plan to resolve the challenges in this sector?

This is a continuous process and we are slowly moving towards grid parity. I believe there are three challenges in achieving this – the absence of an innovative financing model to bring down costs; counterparty risks to ensure that the PPAs are bankable, offering surety and security to investors; and transmission constraints. We are working on all three and are making steady progress. I am confident that you will hear much more in the days to come. We are mulling on the idea of dollar-denominated tariffs and seeking suggestions from people to help create a hedging mechanism that will lower costs.

What steps need to be taken to ensure project continuum given that capacity allocations under the Jawaharlal Nehru Nation Solar Mission (JNNSM) Phase II have been low?

The JNNSM scheme is a non-starter. How can a country plan to expand its capacity fivefold on the back of such huge subsidy requirements? The investment requirement for each megawatt of solar power is around Rs 10 million; in order to achieve 100 GW, we will need around Rs 1,000 billion in investments. This government will think innovatively and bring down the cost of solar power without pressing for more subsidies.

When can we expect the next big allotment of solar projects?

This will happen very soon. My biggest challenge is to get state governments to plan their solar park and renewable energy policies, and determine how they will arrange transmission from the national grid, and what support is required on the transmission front. We are in dialogue with several states including Telangana, Andhra Pradesh, Rajasthan and Gujarat for projects. Almost 19 solar parks are proposed to come up in several states.

When are the amendments to the Electricity Act, 2003 likely to take place?

The amendments to the Electricity Act are in the public domain. It has been referred to the Standing Committee on Energy for suggestions and I am hoping to receive its report during the second half of the budget session.