Between June 15 and 18, 2013, Uttarakhand saw its worst floods in decades. Much of the state was reduced to rubble, with entire villages being uprooted and covered in swathes of muck and debris. A number of operational and upcoming large and small hydroelectric projects (HEPs) on the Ganga’s tributaries (including the Alaknanda, Bhagirathi, Mandakini, Vishnu Ganga, Pindar and Nandakini) also suffered serious damage.

Now, even as the locals try to rebuild their lives and the government focuses on relief and redevelopment, many are calling into question the unchecked hydropower development that has taken place in the hill state during the past few years. Many believe that the damage wrought by the floods was exacerbated by the poor building practices for hydropower plants. The consensus among environmentalists is that the dams and barrages at these plants contributed to flooding by dramatically altering the natural flow of rivers and increasing siltation.

In this scenario, it is important for the state government to measure the extent of damage caused to and by hydropower plants, and accordingly chart the future project development road map.

Power dynamics and extent of damage

Uttarakhand was a power-surplus state till 2005. However, increasing industrialisation changed that scenario. The state’s industrial sector grew by 18.25 per cent annually during the last eight years, the highest in the country after Sikkim. This significantly increased the demand for power, leading to rapid construction of hydropower plants in the state.

The state has a hydropower potential of 27 GW, of which 3.6 GW has been exploited so far. About 20 GW of capacity is under development and 3.4 GW of projects are at the construction stage.

It is estimated that about 70 hydro projects, including existing, under-construction and proposed dams, are located in two river basins alone – the Bhagirathi and the Alaknanda – which saw the worst flooding according to an interministerial group that examined their environmental impact.

Among state sector undertakings, Uttarakhand Jal Vidyut Nigam Limited (UJVNL), which owns and operates 1,310 MW of hydropower capacity, has suffered significant losses as 17 of its small-hydropower (SHP) projects (aggregating 66.85 MW) and three of its large hydro projects (aggregating 538 MW) have been impacted. The affected SHP projects include 15.85 MW of operational and 51 MW of under-construction projects.

Arvind Kumar, general manager, small- hydro projects, UJVNL, estimates that the damage suffered by the company’s hydro projects could amount to Rs 1,317.8 million. According to him, “Two SHP projects, the 4 MW Kali Ganga I located in Rudraprayag district and the 2 MW Kanchauti project located in Pithoragarh district, have suffered the maximum dam- age. Apart from ManeriBhali I, all the major hydropower projects of UJVNL have started functioning normally.”

In the large hydropower space, projects of state-owned NHPC Limited and UJVNL as well as private developers like GVK and Larsen & Toubro (L&T) have been badly hit, mostly due to high silt levels. NHPC’s 280 MW Dhauliganga power project is submerged and generation has stopped.

A committee has been constituted to take stock of the projects that have been damaged. It will visit the power stations as soon as the roads have been cleared and submit its report on the future course of action.

Need for a balanced growth

While there is no denying that hydropower development is essential for Uttarakhand’s overall economic development, the dam- aging consequences of unplanned construction cannot be ignored. Clearly, there is a need for balanced growth.

On their part, the state and central governments have to be more stringent in terms of granting clearances and formulating guidelines; as well as ensuring that developers adhere to these. According to current norms, the hydropower feasibility report is required to include two years of hydrogeological and soil stability studies, after which the prelimanary project design and environmental impact assessment can be determined. However, these guidelines are largely not adhered to.

However, the problem arose as some developers failed to follow the debris disposal instructions. In a recent written communication to the Ministry of Environment and Forests, leading environmental organisations have cited six projects to prove this point. One of these – the under-construction 330 MW Srinagar HEP – has been dumping rubble into the river, they stated, or piling it on mountain slopes without appropriate retaining walls. Due to this, the adjoining town was sub- merged under water as well as 10-30 feet of rubble. In the case of the 99 MW SingoliBhatwari and 76 MW Phata Byung HEPs on the Mandakini river in Rudraprayag district, the communication stated that both the projects had been dumping debris, which was carried by the river to downstream villages and towns up to Rudraprayag. Some SHP projects too are being held responsible for the disaster impact. These include the 4 MW Kali Ganga I, the 10 MW Kali Ganga II, the 9.5 MW Madhyamaheshwar HEP, the 5 MW Motighat, and the Assiganga I and II (5 MW each) projects.

While, compared to large hydro projects, SHP projects do not entail large-scaledeforestation, blasting and landfills, many of these small projects divert water to another site for power generation. This disturbs the hydrogeological flow. Therefore, adequate preventive measures should be taken and advanced technologies need to be deployed to minimise the environmental impact of these projects.

Another key concern in hydro-rich states like Uttarakhand, Himachal Pradesh and Sikkim relates to the felling of trees and construction of ghat roads, which is necessary for transportation to the project site. Illegal tree cutting, not just for project construction but also for furniture, etc., is rampant in these states, notwithstanding a ban. This is believed to be contributing substantially to the imbalance in this eco- logically fragile region.

To prevent such calamities in the future, it is imperative that state agencies maintain strict vigil on the disposal of debris and the granting of forest clearances, and that power companies and other developers (roads, mining, etc.) be penalised heavily for any violation. 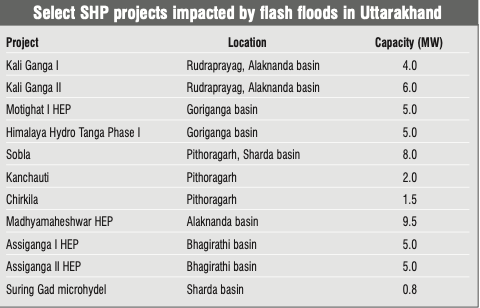 In the wake of the widespread devastation, the state government needs to seriously review its development strategies and environmental policies. Meanwhile, to address the state’s power woes, theimmediate course of action should be to ensure that operational projects come back onstream and projects under development face minimum delays.

In the longer term, it will have to come out with a well-conceived policy that strikes a balance between environmental responsibility and development. In this regard, the Uttarakhand Water Management and Regulatory Act, 2013, which was approved on April 4, 2013, should be implemented soon. The act provides for the establishment of a water management regulatory authority that would ensure judicious and equitable management of water resources in the state as well as its proper allocation and optimal utilisation. The five-member authority will have the powers of a civil court and the mandate to carry out development in the state in an eco-friendly and sustainable manner. It will also review and accord clearances for new water resource projects proposed in the river basins and sub-basins.

Project development lessons can also be drawn from international experience. In countries like China and Korea, highly advanced technology is used for building ghat roads. No doubt, this escalates project costs manifold, thereby impacting project economies, but, more importantly, it ensures that the ecological risks are mitigated significantly.