The past year saw several leadership changes in both the public and the private sector. At the central level, a new secretary was appointed in the Ministry of New and Renewable Energy (MNRE). The Central Electricity Authority (CEA) and the Grid Controller of India (formerly POSOCO) also saw new appointments at the top. Several public sector undertakings witnessed senior management changes. These included REC Limited, NHPC Limited, Energy Efficiency Services Limited (EESL), PTC India Limited, and NTPC Limited. In the private sector, there were leadership changes in several clean energy businesses including Suzlon Energy, Vikram Solar, Azure Power and Serentica Renewables. A look at the key movements in the power sector over the past year…

Bhupinder Singh Bhalla took over as secretary, MNRE, in October 2022, replacing In­du Shekhar Chaturvedi. Bhalla has ex­te­n­­sive experience as a public administrator. Prior to this appointment, he served as chairman of the New Delhi Municipal Council. He has also se­rved as additional chief secretary to the Government of New Delhi. In the recent past, he also served as additional se­cretary, Department of Commerce, where he was responsible for India’s trade relations with its neighbours as well as export promotion of engineering products worldwide. He also led the India Brand Equity Foundation, a trust established by the Department of Commerce, as its chief executive officer. Ad­ditionally, he was the ex-officio president of GS1 India, a not-for-profit standards organisation set up by the Department of Commerce in collaboration with the industry.

Bhalla is a graduate from the Shri Ram College of Comm­e­rce, University of Delhi, and has a postgraduate diploma in management from IIM Bangalore. He also has an MBA in finance and consulting from the University of Georgia’s Terry College of Business.

Vivek Kumar Dewangan assumed charge as chairman and managing director (CMD) of REC Limited in May 2022. He is also the ex-officio chairman of REC’s wholly owned subsidiary, REC Power Development and Consultancy Limited. Before his appointment at REC, he served as additional secretary in the Ministry of Power (MoP).

In the past, he has held various administrative positions in areas such as finance; power and energy; petroleum and natural gas; elections, law and justice; commerce and industries; and offices of various ministries (corporate affairs, agriculture, and food processing industries); and district admi­nis­tration (Surguja and Raipur districts of Chhattisgarh, and Senapati district of Manipur).

A 1993 batch IAS officer of the Manipur cadre, Dewangan has a BE in electronics from NIT, Bhopal, and a postgraduate degree in optoelectronics and optical communication from IIT Delhi.

Ghanshyam Prasad took charge as chairperson and ex-officio secretary to the Gov­ernment of India, CEA, MoP, in July 2022. He is also a director on the board of the Nu­clear Power Corporation of India Limi­ted in an ex-officio capacity, and an ex-officio member of the Central Electricity Regulatory Commission.

Prasad has worked for 30 years in the power sector and for three years at the Bokaro Steel Plant, SAIL. In the power sector, he has worked and contributed to various areas in­cluding renewable energy, transmission, distribution, generation, power market development/trading of power, and re­forms and restructuring. Prior to his current role, he held the post of joint secretary in the MoP. He has served in the MoP for around nine years in various capacities.

Prasad was a part of the Central Power Engineering Se­rvices batch of 1989. He has a BTech degree in electrical en­gineering from IIT (BHU) Varanasi. He also has an MTech in energy and environment management from IIT Delhi and an MBA in finance from IGNOU, Delhi.

Chaubey is a civil engineering graduate from IIT Khara­gpur. He joined NHPC in 1985 as a probationary executive (civil) at the 540 MW Chamera Hydroelectric Project (HEP) (now Chamera-I Power Station), Himachal Pradesh. He has been working for over 37 years in different departments inclu­ding contracts, design, and engineering and construction projects for NHPC in various capacities. For over 25 years of his career he has worked in the design and engineering division in various capacities, as well as in planning and layout engineering for pre-feasibility reports/feasibility reports/de­ta­iled project reports, and construction stage design of hy­dro­electric/river valley projects. Chaubey has worked on the co­n­struction of two key NHPC projects – the 540 MW Ch­amera-I HEP in Himachal Pradesh (executed in collaboration with Canada’s SNC/ACRES) and the 480 MW Uri HEP in Jammu & Kashmir (executed on a turnkey basis by Uri Civil, a Swedish consortium).

Narasimhan has over three decades of experience in power system operation, having worked with the CEA, the Power Grid Corporation of India (Power­grid) and POSOCO after an initial stint with Bharat Heavy Elec­tricals Limited. After a 23-year tenure at the Northern Regio­nal Load Despatch Centre and the Western Regional Load Despatch Centre, he joined the National Load Despatch Centre (NLDC) in July 2011 and was later elevated to executive director (NLDC). He has extensive experience in the in­terconnection of regional grids to create a synchronous all-India electricity grid. He has handled all facets of power system operation, and has also implemented several electricity market reforms such as availability-based tariff, interstate open access and day-ahead markets at the power ex­change.

He has a bachelor’s degree in electrical engineering and an MBA in finance. 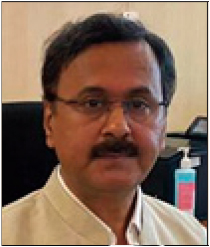 Srinivasan is a commerce graduate from the University of Nagpur and a member of the Nagpur chapter of the Institute of Cost and Work Accountants of India.

In October 2022, Suzlon Energy appointed Vinod R. Tanti as CMD for the next three years. The announcement followed the de­mi­se of Tulsi Tanti, the founder of Suzlon En­ergy. The board also approved the app­ointment of Girish R. Tanti as executive director designated as executive vice-chairman for a period of three years with immediate effect.

Vinod Tanti has extensive experience of over 34 years, managing various key functions at Suzlon. He was also the chief operating officer of Senvion, Germany, from June 2012 till June 2013. He has a bachelor’s degree in civil engineering.

Varun Mehta was appointed director on the board of Torrent Power in August 2022. He has worked across different business se­gments of the company – renewables, thermal generation and distribution. Currently, he heads the di­stribution licence (Ahmedabad, Gandhinagar, Surat, Diu, Da­man, Dadra, Nagar Haveli, Dahej and Dholera), transmission and cables businesses.

Mehta has a bachelor’s degree in management from the University of Warwick, UK, and an MBA from INSEAD, France.

Vignesh Nandakumar has been appointed CEO of Serentica Renewables, which is 100 per cent owned by Twinstar Over­se­as Li­mited. Launched in September 2022, the company will focus on providing round-the-clock carbon-free power to large consumers of energy.

Nandakumar has over two decades of experience across the technology, renewable energy and investment domains. He has been instrumental in building renewable energy businesses from scratch to scale, executing renewable energy projects, driving the strategic commercial objectives of business, and originating mergers and acquisitions. In the renewable energy space, he has led project investments worth over $750 million across India, South Africa and Southeast Asia for SunEdison.

Nandakumar has a BTech from IIT Madras, an MS from Washington University and an MBA from the Indian School of Business.

Ivan Saha took charge as CEO of Vikram Solar in July 2022, succeeding Saibaba Vutukuri. Prior to this, Saha was chief technology officer (CTO) at ReNew Power Pri­vate Limited. He has experience in techno­logy and operations roles across organisations such as IIT Kanpur, the Indian Space Research Organisation and Moser Baer Photo Voltaic Limited. Between 2013 and 2020, he worked at Vikram Solar as president and CTO.

Saha has a bachelor’s degree in science (ceramic technology) from the University of Calcutta, and a master’s in technology (materials science) from IIT Kanpur.

In September 2022, Rupesh Agarwal took over as acting CEO at Azure Power. He join­ed the company in August 2022 as chief strategy and commercial officer.

He has over two decades of leadership experience in as­set development and strategy consulting. He has been ad­vising leading utilities and private equity investors on developing and managing their cleantech investments.

Agarwal has an MBA from the Macquarie Graduate Sch­ool of Management, Australia, and a bachelor’s degree in mechanical engineering from the R.V. College of Enginee­ring, Ba­ngalore University.