Karnataka is one of the country’s top five renewable-rich states with a po­t­ential of approximately 155 GW, making it a favourable destination for re­new­able energy investments in India. The state has solar, wind, solar-wind hybrid, bioma­ss, cogeneration, waste-to-energy, small-hy­d­ro and other renewable energy resour­ces. It has the fourth highest install­ed rene­wable energy capacity in the co­un­try after Rajasthan, Gujarat and Tamil Nadu. Kar­nataka has a total installed renewable po­wer capacity of 15,653 GW (as of July 2022), of which approximately 7,679 MW comes from solar projects and 5,200 MW from wind projects. This makes up 80 per cent of its total renewable power capacity. The remaining is contributed by biopower (1,870 MW) and hydropower (980 MW).

Karnataka was an early mover in the In­di­an renewable energy landscape and has risen to prominence because of its effective policies, programmes and imp­le­me­n­tation. It had already overachieved its target of 6 GW of solar by 2021 and has an additional multi-GW of renewable ca­pacity in the pipeline to be completed by 2030. The Karnataka Renewable En­er­gy Policy 2022-2027 has also been envisi­oned by the Karnataka government to fur­­ther harness the state’s renewable en­ergy potential.

The Government of Karnataka announced the new Karnataka Renewable Energy Policy 2022-2027 in April 2022 in order to maintain the state’s position as a prefer­red investment destination in the renewable energy sector and to create an eco­system for sustainable and green energy development. Karnataka Renewable Energy Deve­lopment Limited is the state nodal agency for the implementation of this policy. The policy was created to as­sist the Indian go­vernment in attaining the renewable en­ergy target of 500 GW by 2030, and to promote new initiatives and emerging energy technologies in the state. 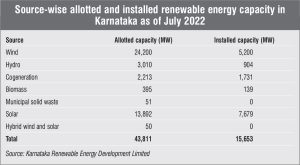 The state government introduced the Kar­nataka Renewable Energy Policy 2022-2027 with the target to build 10 GW of additional renewable energy projects in the state, including up to 1 GW of rooftop solar PV projects. This will help grow the st­a­te’s economy and encourage investment in the infrastructure sector. Further, the government aims to export power and meet the state’s renewable energy dema­nd. Another objective is to meet the Kerala Electricity Regulatory Commission’s rene­w­able purchase obligation by developing hybrid projects and renewable energy parks throughout the state. The state also intends to promote private sector involvement in the transmission network and gr­e­en energy corridor projects. It aims to build an ecosystem for distributed gene­ra­tion by solarising agricultural feeders and pumps, which do not require transmission and distribution infrastructure. The policy encourages the use of cleaner renewable energy in the transportation se­ctor in order to increase the uptake of el­ec­tric vehicles (EVs) and decarbonise transportation in the state.

In order to integrate more renewable energy into the grid, the state has set a goal of developing an energy storage market that provides grid support services such as peak reduction, curtailment management, contribution to reliability needs, transmission deferrals and intra-day and seasonal variation management. It is promoting the development of floating solar power, inclu­ding the integration of existing hydroelectric infrastructure. Finally, the policy supp­orts innovative initiatives such as biomass and waste-to-energy project development.

Various developments have been witnessed in Karnataka across different renewable energy verticals over the past few months.

Karnataka is one of the leading states in renewable energy with a high untapped potential. To tap this potential, the state needs to upgrade its transmission infrastructure and continue to introduce supportive policies to stay ahead in the ga­me. The Karnataka Renewable Energy Po­­li­­cy is, thus, a beneficial approach for the continued growth of the state’s re­ne­wable energy sector.

Overall, the state is poised to remain a top contender in the renewable energy race with its thrust on streamlined growth and timely policy interventions. 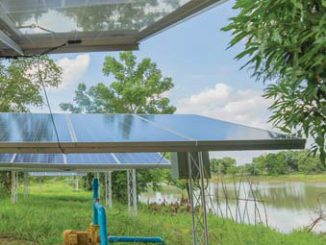 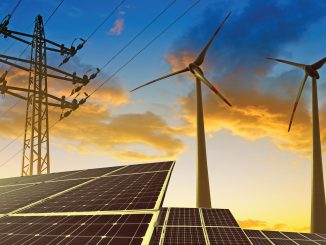