By 2030, India’s solar market will stand at around 300 GWp+, which means 25-30 GWp of annual average production. The annual average production volume of solar PV modules could be lower in the beginning but the latter part of the decade will contribute more in terms of number. Indian electricity requirement over the next 10 years will largely be met by solar, wind and some amount of hydropower. New additions to thermal power infrastructure beyond what is already under construction are not expected.

Domestic solar manufacturing started way back in 1991 in a small way and by 2007-08 the country was ahead of China in terms of production of cells and other components. India had solar manufacturing lines and exported most of the solar PV modules to Europe as the domestic market was at a nascent stage. However, Indian entrepreneurs sensed the opportunity and continued to grow; for instance, within three years of inception, Waree Energies grew its manufacturing capacity from 2 MWp a year to over 2,000 MWp a year currently.

There has not been much emphasis on manufacturing raw materials required for strengthening the solar PV value chain in India. Manufacturing, in general, has not been a major focus area. It has always been more convenient to import processed raw materials from China. For instance, aluminium frames, which are used in solar modules, are produced in India but manufacturers prefer to supply to automobile or building industries rather than to solar companies due to various challenges such as the huge working capital requirement. Given the right conditions such as ease in obtaining permissions, a favourable rate of interest, reduced time frame for setting up factories, and working capital support, we would be able to stop relying on Chinese imports and manufacture our own. Overall, the fundamental ease of doing business needs to be addressed.

An industry suggestion is to replicate the government’s model of solar parks, and create industrial clusters which will produce all the parts required to strengthen the solar PV manufacturing supply chain. Also needed is R&D, perhaps in association with a university, to deepen technical acumen; and testing facilities, which we are currently lacking.

In 2007, Reliance Industries started looking at manufacturing for the entire solar PV value chain. The major operational costs involved in polysilicon production are water and electricity, and quartz. While many companies at this point made progress in solar PV module and cell manufacturing, these efforts were halted owing to the financial crisis of 2008. This is when China left India behind as it did not stop expanding due to recession and today it has managed to capture a major portion of the global solar market.

The solar PV manufacturing industry has been riddled with roadblocks such as long processes for clearances, bureaucratic hurdles, high turnaround time and enormous working capital requirements. A manufacturer’s focus is always on attaining multifold growth, but the industry is hard to sustain in the initial days making prospects of growth tougher. There is lack of technical support and no encouragement for R&D to scale up operations. Another challenge is the inconsistency of demand in the sector – if demand for materials is fluctuating, it does not improve manufacturers’ morale.

There is a need for a clear vision for the Indian solar manufacturing sector. In 2009, India unveiled the National Solar Mission, and in the same year China declared solar as a strategic industry. There was a wave of optimism for solar as the industry of the future across Europe and elsewhere. However, the Indian and Chinese approaches were totally different. While China  focused on building a manufacturing base in order to become what it is today – a global factory for solar modules and solar technologies – India only implemented the National Solar Mission in parts. Thus, over $10 billion has ended up going to China due to our low manufacturing prowess. Even today, a staggering 90 per cent of raw materials required for solar manufacturing in India are imported from China.

The recent government policy, announced in order to comply with WTO guidelines and to integrate manufacturing and projects,  may not be entirely effective as it invests too much power in the hands of solar project developers. Developers may just negotiate an equity model for a manufacturer, which may not necessarily give the end-product an edge over Chinese prices, which defeats the whole purpose. A more beneficial model would have been to divest more power to manufacturers, who could have reverse-auctioned projects to suitable developers.

For us, to cater to both domestic and global solar PV markets, our products will have to be globally competitive. China has taken strides in the solar sector by means of favourable policies and by making manufacturing a core industry. We need strong public policies, supportive tax reforms and more entrepreneurs in the Indian solar sector.

The opportunity is ripe for India, as a lot of countries today have trade barriers against Chinese products. The top three solar manufacturers in India are exporting over 20 per cent of their production to developed countries such as the US and Japan. This goes to show that we are technologically almost at par with the developed world, and have the knowhow to become a global solar player in the sector. Manufacturing must become a focus industry in India, and the resources spent on R&D need to be geared towards manufacturing.

Early solar entrants such as CEL, BEL, BHEL and REIL made great strides in solar PV module technology, but the support required to scale up was missing. China, meanwhile, made huge resources available to support the growth of its solar industry. Chinese companies sank during the process and billions were lost in developing the industry, but the continued government support has helped the country emerge as a global leader today – servicing almost 90 per cent of the global solar demand. China also sells globally at a rate lower than it serves domestically, which makes it even harder for Indian manufacturers to compete, in the absence of further support on the policy side. 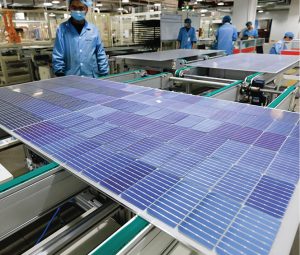 The solar PV manufacturing industry, in terms of government policy, can benefit from the example of the Indian automobile industry. Back in the 1990s an import duty of 150 per cent was levied on every imported car. Even today, there is an import duty of no less than 80 per cent per vehicle. This gave a major boost to the sector and helped India in becoming the world’s largest two-wheeler producer. This model of creating automobile hubs across the country can be replicated in the solar manufacturing space. If the Indian solar manufacturing sector is to compete with its Chinese counterpart then we will need strong supportive government policies to give an impetus to domestic manufacturing.

Despite stiff competition from China, a supportive policy framework from the Indian government can help the domestic solar industry leapfrog and cut its import bill. To process, say, a 100 GWp solar supply order, India will incur an import bill of over $17 billion; however, a 20 GWp self-sufficient facility can be set up in the country for about $4 billion and in the meantime about 1 million jobs can be created.

A basic customs duty (BCD) levied on solar energy equipment is helpful (now we are in the duty-free period for the next nine months). However, a 40 per cent BCD on solar PV modules and 25 per cent on solar cells should be enforced before March 2022, so as to compete with Chinese prices, as the Chinese government will willingly subsidise their companies to deliver lower prices. China also leads us in the watt-peak index, with a reading of 450 while India is at 380-390. Without a complete barrier on imports from our competing neighbour, which can only come from a 70 per cent-plus duty model, Indian products cannot compete with Chinese counterparts. These protections may not prove effective for a long time in the endeavour to build a globally competitive industry. Other issues that need to be looked into are: India’s working Capex is about 11 per cent while that of China is at 4 per cent, India’s power cost at 6 cents is 2x that of China, manufacturers are not given free land in India unlike China, and China makes available funds required to scale up manufacturing which helps ratchet up production. Further, we need a singular, unified solar body, like a solar energy authority of India, to spearhead the creation of a robust manufacturing ecosystem, which, alongside the Make in India initiative, will drive investments and growth. Moreover, India needs to build complete self-reliance in the entire solar PV manufacturing value chain, including land and all other required ancillary component industries.

A key industry player has indicated immediate plans of investing in module generation and is making a foray into cell manufacturing. Another player has expressed interest in increasing capacity, provided the government policy starts supporting the manufacturing ecosystem.

The domestic developer’s perspective today on whether Indian solar manufacturers can compete with Chinese quality is still not positive for solar manufacturers, despite the proven quality of Indian products and economies of scale. While there is acceptance of India-manufactured solar goods on an international platform, including some large developers in countries such as the US, domestic buyers and end-consumers are sceptical.

Since 2010, the emphasis has been on cheap power even though it should have been on ensuring energy security. This recalibration of focus can drive manufacturing in the Indian solar industry to new heights, generating jobs, rendering competitiveness and reducing our solar modules import bill. Investors are attracted to ease of doing business, robust infrastructure and favourable policies. If we are able to create this favourable environment, investments in solar manufacturing are bound to come in, as many countries are looking for an alternative to Chinese products.