The simple idea that the sun never sets – always shining at some location across the globe, where its light can be converted into energy – led to the conceptualisation of the “One Sun One World One Grid” (OSOWOG) initiative. The First Assembly of the International Solar Alliance (ISA) in October 2018 saw the Indian prime minister, Narendra Modi, present his vision for a common grid that will transfer solar power across countries in the form of OSOWOG.

In his speech, Modi remarked, “Today, we only think in terms of availability of sunlight in hours in our own country. However, if we move ahead with the dream of ‘One World One Sun One Grid’, then it will not be impossible to produce electricity somewhere at some point of time because the sun must be shining in some place on earth all the time. So, if the sun never sets, then why should the generation of electricity stop?” Thus, OSOWOG envisages a global ecosystem of interconnected renewable energy resources.

Renewable energy-rich locations are not uniformly distributed across the globe. Some regions may be rich in solar power while some may have high offshore wind potential, and a few may not have any renewable energy resource that could be deemed affordable. Further, many such resource-rich locations are often concentrated at sites that are far away from load centres. Thus, power grids must be enhanced to interconnect not only regions in various countries, but also continents and the world at large. This interconnection becomes even more important owing to diverse geopolitical, market integration and techno-economic dynamics.

As it is, the entire world is becoming more interconnected, with global connectivity assuming centre stage through trade, infrastructure and transport. This decade is likely to witness deeper regional interconnections through energy networks. A supergrid – connecting various countries through high voltage direct current (HVDC) grids – is not a new concept, with cross-border energy transmission already having started, albeit in a modest way. In fact, such international networks have been in existence in Europe for a long time and many European countries, including Germany, the Scandinavian nations, the UK and Italy, import or export a sizeable share of electricity. Other regions such as Southeast Asia, Latin America and East and West Africa have also witnessed significant developments on this front. Thus, an intercontinental global supergrid is not an unachievable idea.

If successful, OSOWOG can serve three critical purposes: increase sustainability, reduce costs and improve security. First, such an international grid could connect a low renewable energy potential country with resource-rich countries. This, in turn, would allow the former to increase the share of clean energy in their energy mix instead of depending completely on fossil fuels. It will also encourage the greater deployment of renewable energy projects, even in regions with surplus capacity.

Second, renewable energy costs, especially those of solar photovoltaic, and onshore and offshore wind, have decreased significantly over the years as compared to fossil fuels. Thus, greater consumption of clean energy in lieu of fossil fuel-based power can significantly lower the average power costs for countries, which will ultimately benefit end-consumers. Further, this will help in reducing energy curtailment in surplus regions and reduce the need for balancing reserves.

Finally, such a global grid can address the issue of energy access in countries where a significant number of people still live without quality and affordable power. Further, emergency blackouts due to disasters that leave people without power for days can be prevented to some extent with such advanced interconnections. Adding emerging technologies such as energy storage and green hydrogen can make grids even more robust and flexible.

OSOWOG is still at its initial stages. It is planned to be implemented in three stages. First, a pre-feasibility analysis will be carried out, which will include assessments of individual countries, demand-supply projections, renewable energy resource potential assessments, and scenario assessments for net zero emissions by 2050. Second, the political process for choosing pilot projects and the timelines for commissioning the interlinks will be decided. Lastly, the institutional framework will be set up.

With India at the fulcrum, the global grid is to be split into two broad zones: the Far East, which would include countries such as Myanmar, Vietnam, Thailand, Lao and Cambodia, and the Far West, which would cover the Middle East and the African regions. The initiative is planned across three phases:

The Indian Ministry of New and Renewable Energy, the ISA and the World Bank have signed a tripartite agreement to work jointly on the project. As a part of this agreement, the MNRE is the programme support agency, the ISA is the nodal implementing agency, and the World Bank is the strategic advisory and funding agency for the initiative. Other implementing partners include a consortium led by Electricité de France to conduct the pre-feasibility study for OSOWOG and create a road map. The first report is expected to be out soon, with another expected by end 2021 and the last by the first quarter of 2022. The State Bank of India is the contracting agency and EY is the knowledge partner for this initiative. The other members of the consortium are Application Européenne de Technologies et de Services and The Energy and Resources Institute.

These entities are working together on synergising efforts across 140 countries spread across the Far East and the Far West regions to initiate policy dialogues and set up a global collaborative framework. Planning for a project of OSOWOG’s scale and size includes several considerations including technical and economic valuations, regulations in different countries, country-wise targets for clean energy and carbon emission reductions, transmission technologies such as high voltage alternating current or HVDC, undersea or overhead lines, smart operations management, role of hydrogen and energy storage, and system stability. The project teams are already working on a detailed feasibility study and negotiations are planned with different countries to start this initiative.

The pace of renewable energy deployment has increased owing to the achievement of grid parity in different countries. This is helping achieve an economical energy transition. However, issues regarding its distributed nature, intermittency and demand-supply mismatch need to be addressed in a timely, geographically coordinated and effective manner. This is where a large global grid such as OSOWOG comes into the picture, as it can overcome such challenges and provide energy security to countries in a sustainable and cost-effective manner. Further, it would help countries to attract investments in clean energy deployment, generate employment opportunities, enhance skills, build capacity, and be on par with their neighbours and advanced nations in terms of technology advancements.

That said, this project is going to be extremely challenging to implement. Setting up even one transmission project within a particular country takes months of deliberations, several rounds of approvals, and years for final commissioning. OSOWOG would essentially have to deal with these challenges at a global level. Alongside coordination amongst different institutions across various countries and geographies, attention needs to be paid to the different grid technical standards, operators, regulatory systems and regulators in those countries. The actual implementation and operation of the project will largely depend on collaboration and agreement between different institutions and countries regarding these important considerations. Further, business models, tariffs and even different currencies will have to be accounted for.

Thus, going forward, the success of this grand vision will depend largely on the efficacy of the implementation mechanisms that are developed with expertise and coordination among not just various countries, but also specific institutions within these countries.

SSE Renewables to apply for a MAC for Irish wind project

April 27, 2022
SSE Renewables has announced its intention to apply for a Maritime Area Consent (MAC) for its Arklow Bank Wind Park Phase 2 project under Ireland’s ...
More 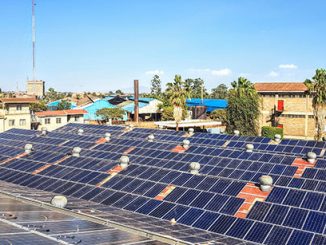 July 21, 2022
The Karnataka Cooperative Milk Producers’ Federation (KMF) has requested bids for the establishment 100 MW of solar power projects for KMF and i...
More