Greenko is focusing on integrated renewable energy storage projects (IRESPs) by setting up solar, wind and pumped hydropower projects together to provide round-the-clock (RTC) renewable energy. It is currently constructing two IRESPs: the Pinnapuram pumped storage project in Andhra Pradesh, and the Saundatti pumped storage project in Karnataka. The Pinnapuram IRESP will consist of 2,000 MW of solar, 400 MW of wind and 1,200 MW of pumped hydro storage capacity, which will generate 7 BUs of electricity. The two projects are expected to be commissioned at a capital outlay of over $2 billion. The IRESPs are expected to provide flexible power to the grid and offer many other benefits including on-demand power supply, grid balancing, ancillary storage and limited storage loss.

Many key developments have taken place in this business vertical in recent months. In January 2020, Greenko and ReNew Power emerged as the winners in the auction conducted by the Solar Energy Corporation of India for 1.2 GW of solar, wind and energy storage projects with guaranteed peak power supply. Greenko was awarded 900 MW at a peak power tariff of Rs 6.12 per kWh.

Then, in June 2020, the Andhra Pradesh government renegotiated the contract with Greenko for the proposed IRESP in Pinnapuram. As per the renegotiations, the government reportedly doubled the land prices from Rs 0.25 million to Rs 0.5 million (the previous rate having been fixed by the former government).

The state government decided to allocate 4,766.28 acres of land to the company for setting up the project. It also levied a green energy development charge/cess of Rs 100,000 per annum on each MW of power produced by the group for all forms of renewable energy – wind, solar and pumped hydro. While this charge will be applicable for the first 25 years, the Greenko Group will have to pay Rs 250,000 per MW annually thereafter, for the operating life of the respective projects.

In June 2020, Greenko Energy Holdings (Greenko’s holding company) secured equity commitment for two projects with a total pumped storage capacity of 2.4 GW (1.2 GW at Pinnapuram and 1.2 GW at Saundatti). It also signed definitive agreements for a primary equity funding of $495 million with an affiliate of the Government of Singapore Investment Corporation (GIC) and an entity owned by the Abu Dhabi Investment Authority. This was a part of last year’s financing round, in which the company raised $824 million.

In August 2020, NTPC Vidyut Vyapar Nigam (NVVN) signed an agreement with Greenko Energies Private Limited to explore the possibility of entering into an arrangement for trading, collaboration and partnership in IRESPs set up by Greenko to offer RTC renewable energy to potential customers. The agreement was signed in a bid to help NVVN provide clean energy during periods of peak grid demand.

Since its inception, Greenko has raised funds of over $2 billion for organic as well as inorganic growth. The company initially acquired biomass and hydropower plants before setting up greenfield projects. Post 2016, it again took the inorganic growth route and acquired key companies and renewable energy assets. In October 2018, Greenko acquired 385 MW of wind power projects from Skeiron Green Renewables at an enterprise value of about $0.5 billion. In the same month, it also acquired Orange Renewables for approximately $1.02 billion, which included $680 million of debt. The equity infusion in the transaction was approximately $340 million. Greenko took over 907 MW of operational solar and wind projects from Orange Renewables, and over 500 MW of under-development assets. Further, in November 2016, the company acquired SunEdison’s 587 MW wind and solar portfolio in India for $42 million and debt of $350 million. During 2017-18, Greenko acquired 100 per cent of the shares and voting interests in Karvy Solar Power Limited, New Era Enviro Ventures (Mahbubnagar) Private Limited, Premier Photovoltaic Medak Private Limited, Pennar Renewables Private Limited, Proeco Energy Private Limited, Saimeg Infrastructure (Mahbubnagar) Private Limited and Sharp Cleantech Infra Private Limited, from different developers.

In March 2019, Greenko signed an agreement with Siemens Financial Services (SFS), the financing arm of Siemens AG, for an equity investment in its 200 MW Poovani wind power project in Tamil Nadu. As per the agreement, SFS has agreed to take a 46 per cent equity stake.

Greenko has received equity from GIC and the Abu Dhabi Investment Authority, both key stakeholders in the company. In September 2020, ORIX announced its plans to invest around $980 million in Greenko Energy Holdings. With this investment, ORIX will acquire more than 20 per cent stake in Greenko. It will integrate its existing wind energy business, which includes projects with a cumulative capacity of 873 MW, with Greenko. The deal, which is expected to close in 2020, is likely to make Greenko the second most valuable renewable energy company in the country with a valuation of over $6 billion.

Greenko has diversified its sources of funding and has tapped the bond market as well. In July 2019, Greenko Energy Holdings raised $950 million through green bonds. The issue was oversubscribed by over three times and was one of the largest green bond issues by a renewable energy company. In November 2017, Greenko raised Rs 30 billion through the sale of onshore rupee-denominated bonds. These bonds will mature in 2027.

Business strategy and the way forward

Greenko’s core business strategy has been to focus on decarbonisation, digitalisation and decentralisation of the energy sector. To this end, it intends to transform its business models from Greenko (GKO) 2.0 – which involved decarbonisation with the aim of increasing renewable energy penetration, making renewables more competitive and integrating renewable energy into the grid – to GKO 3.0, which involves digitalisation with a focus on promoting RTC renewable energy. Following this, Greenko aims to move on to GKO 4.0, involving decentralisation by moving the energy value chain closer to customers and serving their core needs.

Currently at the GKO 3.0 stage, Greenko anticipates significant investments in IRESPs to achieve RTC renewable energy. In this stage, the company has continued to focus on investments in the O&M of its assets through digitalisation. In July 2020, Greenko and ONYX InSight signed an agreement to retrofit and modernise 500 wind turbines for efficient data collection and analysis. Greenko’s target under GKO 3.0 is to become a 30 BU electricity platform by 2023. To achieve this goal, the company aims to progressively expand its asset portfolio in the coming years.

Greenko is also active in the open access space (B2B segment). In 2018-19, the company sold 30 per cent of the power generated through this route. Dealing with energy customers directly is a step towards transitioning to decentralisation, the focus of GKO 4.0.

Be it organic and inorganic growth, diversification in sourcing finance and investments, new business strategies and investment in IRESPs to diversify its project portfolio, Greenko has tried to evolve itself continuously and adapt to changing business dynamics. This has  benefited the company financially. From 2016-17 to 2017-18, the company’s profit increased by 16 per cent, from $28.3 million to $32.9 million. During this period, its revenues increased by a margin of 65 per cent. During financial year 2018-19, the company’s revenues grew by 54.3 per cent.

July 27, 2021
In June 2021, the Department of Heavy Industry released a detailed notification on the production-linked incentive (PLI) scheme, National Programme on...
More

May 6, 2017
Notwithstanding the challenges faced in the implementation of hydroelectric projects (HEPs), NHPC Limited has been at the forefront of hydro capacity ...
More 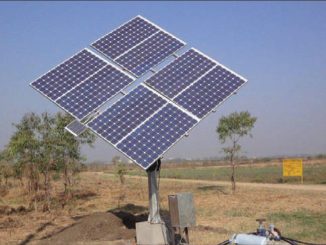 May 7, 2017
The solar power segment has grown exponentially in the past few years. In step with this expansion, the solar industry has been increasingly focusing ...
More