The global renewable energy sector presents a diverse picture of development, with some countries achieving a considerable level of penetration and others lagging behind. The level of growth is a factor of the policy, regulatory, financial and tax benefits offered by the country as well as the targets set by them. Expectedly, countries that have a lower share of renewables have greater scope for development. India, for instance, which has a renewable generation share of 10 per cent, a large renewable energy target and high electricity demand, has scope to integrate much more renewable capacity than a country like Germany, where renewable generation is already at over 40 per cent of the total energy mix.

The transition to a higher share of renewables, of course calls for a substantial amount of financing. According to an estimate by the International Finance Corporation, India will need $450 billion to finance its 2030 target of 450 GW of renewable capacity. Of this, the majority share would be needed for the development of solar power, which  is likely to contribute the maximum among all renewables in India. Towards this, the greening of flows (capital flow marked for green infrastructure development) is essential to achieve the country’s renewable energy targets faster.

Looking at the past financing trends, renewables, especially solar, have emerged as one of the most attractive infrastructure sectors for investment. The government’s policies have de-risked the business to the extent that some of the world’s lowest solar and wind power tariffs are witnessed in India. The regulated returns from the sector under fixed tariffs and the long-term nature of cash flows have attracted some of the largest pension and sovereign wealth funds that look for businesses with strong fundamentals and provide low but steady returns. A look at the credit rating profiles of the major players in this space also shows a consistently rising trend, with some large IPPs and their projects even carrying a rating of A and above. Renewable energy businesses at the holding company level are beginning to stabilise, but due to their rapid pace of growth, they continue to deliver single-digit cash returns to investors.

However, investors need to be cautious given the various risks that can affect the profitability of a solar project in India. Frequent changes in policies and regulations are key among those risks. Take, for instance, the duties on imports. Despite a long-standing concern over safeguard duties, the government is now proposing to impose basic customs duty on imported solar modules. The industry is still seeking clarity on whether these duties will be imposed on modules sourced from special economic zones. Another key risk pertains to module price trends. Modules constitute around 64 per cent of the total project cost. Any change in module costs has a considerable impact on returns. There is a substantial lag of 8-12 months between bidding and procuring modules for a large-scale solar project. Any rise in module prices during this time significantly reduces the returns (and vice versa) and jeopardises project development. Take the case of one of ACME’s solar projects – the developer had to cancel it, apparently due to a mismatch between its expected module cost at the time of bidding and the actual cost at the time of sourcing. There are many such factors that have made a large number of investors, especially on the debt side, wary of investing significant sums in the solar space.

At a virtual conference, “Solar Power in India”, organised recently by Renewable Watch, senior executives from leading companies including Piramal Enterprises, ICRA, Indian Renewable Energy Development Agency Limited (IREDA), IIFCL Projects Limited and the CPP Investment Board talked about the emerging financing trends in the solar power space, new sources of funding and the risks that investors need to watch out for. The following are the highlights and key takeaways from the discussion.

The performance of the solar power industry in the country and world over during the Covid-19 crisis has been noteworthy. India witnessed three consecutive historic bids during the lockdown period. These were: the country’s first round-the-clock tender in May 2020, the world’s largest manufacturing-linked solar tender of $6 billion in June 2020, and the Solar Energy Corporation of India’s (SECI) Tranche IX auction in July 2020 with a historically low tariff. The latest tender (and the two before) is a clear manifestation of the Indian solar segment’s resilience and vibrant ecosystem and of the strong push by the government. It also underlines India’s position as one of the most attractive destinations for solar energy investments globally. The success of these tenders is the result of several positive trends in the domestic as well as global solar power segment. 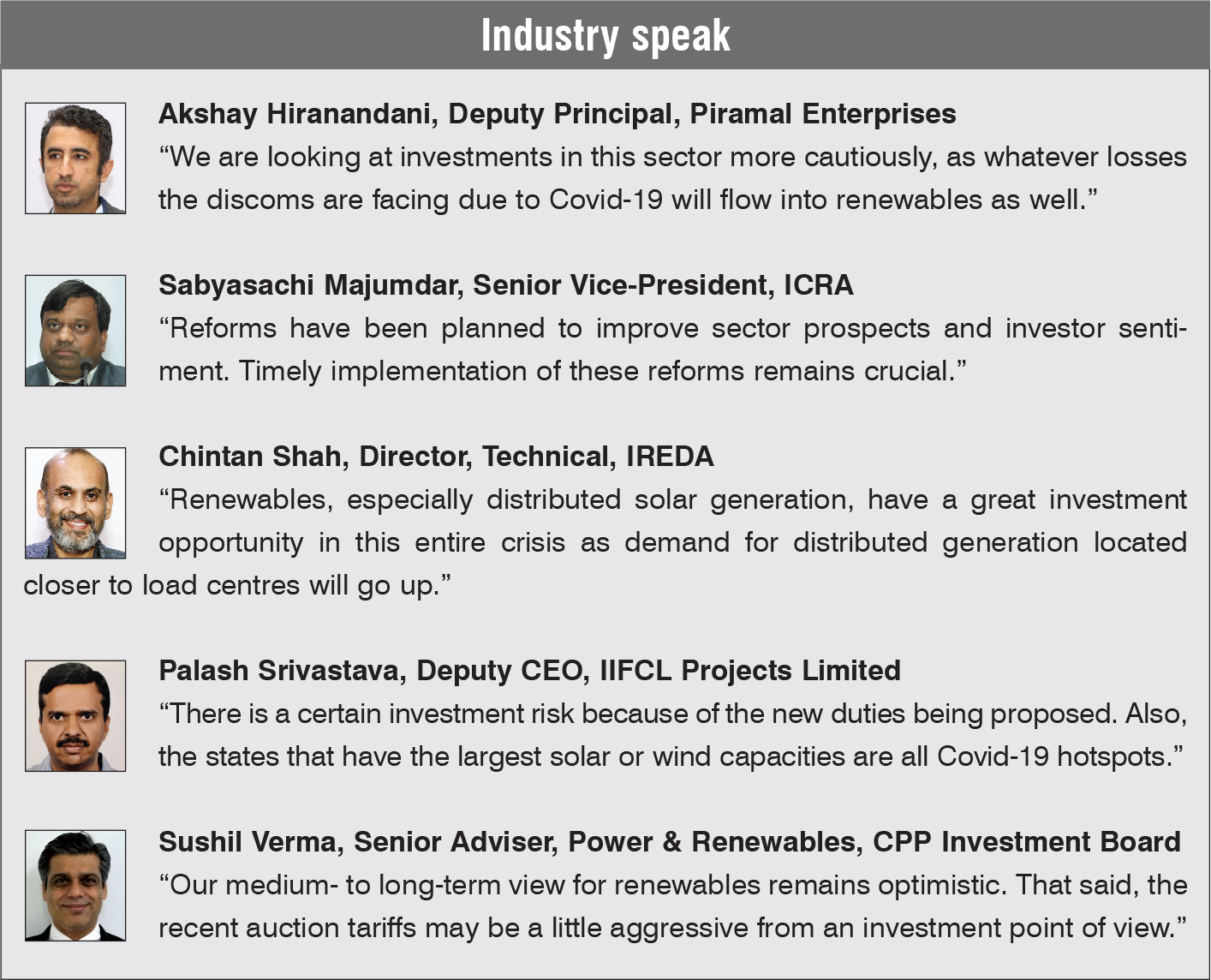 While there are multiple reasons to remain bullish on India’s solar growth, investors cannot ignore certain big risks, some of which have the potential to completely derail the solar segment.

Most investors believe that overall financing activities, including green finance, will see a dip in the short term on the debt front. This dip is due to the ongoing pandemic and the tail-end risks resulting from lockdowns and the corresponding recessionary impact on businesses worldwide. Meanwhile, equity transactions may continue to increase.

Going forward, the solar power segment would need a slew of reforms to accelerate the pace of investments in this regulated business. The reforms would primarily need to address the issue of a weak buyer (the discoms), which may delay or default, or both, on its payments to generators. The other long-term reforms are tariff and structural measures to allow for mutualisation of the cost of this massive integration which, at present, is limited to conventional power generators and utilities, and may lead to a pile of non-performing assets in the entire power sector.

By Dolly Khattar and Khushboo Goyal