In India, the bulk of the power capacity is sold to discoms with a small share allocated to captive and open access consumers. This small capacity is riddled with bureaucratic hurdles and regulatory uncertainties, which make its development quite a cumbersome process. An even smaller contribution to the country’s total power supply comes from power trading, which until recently was limited to day-ahead and term-ahead markets. Moreover, there was no market-based instrument for renewable power trading and renewable energy generators could only sell unbundled power in a day-ahead market and get RECs (green attribute). Thus, only a small volume of renewable power capacity went through power exchanges. India’s distribution power space is also facing issues due to lack of proper load management. The real-time market (RTM)  recently launched by the Indian Energy Exchange (IEX) and Power Exchange India Limited (PXIL) aims to ease many of these problems and provide a win-win solution to discoms and developers.

Launched on June 1, 2020, this new power market is set to slowly change the power trading scenario in India by ensuring that buyers and sellers can purchase or sell electricity online from anywhere across the country with just one hour’s prior notice. Even generators with long-term power purchase agreements can sell their uncontracted surplus power through this market. Generators that are unable to fulfil their contractual commitments due to outages can also buy power through this market. It is particularly useful for renewable energy generators that may have unanticipated surplus or shortfall in wind or solar power generation. Instead of paying charges under the deviation settlement mechanism for over-or undersupply, renewable energy generators can sell power in the market for commercial gain, or procure power and avoid paying penalties.

For discoms, this market will offer them immense flexibility to manage their dynamic and varying load and access to power with an hour’s notice to meet their supply requirements. Like generators, discoms too have an alternative to procure power at competitive prices at short notice. This virtually provides them a revolving power reserve in the form of a trading opportunity for the large-scale integration of renewable energy. Both generators and discoms can sell surplus power in the market at competitive prices. Commenting on the launch of RTM trading, Prabhajit Kumar Sarkar, managing director and chief executive officer of, PXIL, said, “The RTM would present to the discoms as well as both conventional and renewable generators a vibrant market-based platform to better manage their power requirements in a planned, efficient and transparent manner. The RTM would thus provide a platform where generation capacity would be available from all types of sources and enable the discoms to balance the demand in their systems even at the last moment. This would go a long way in fulfilling the objective of utilising efficient power markets for balancing the power system across the country.” 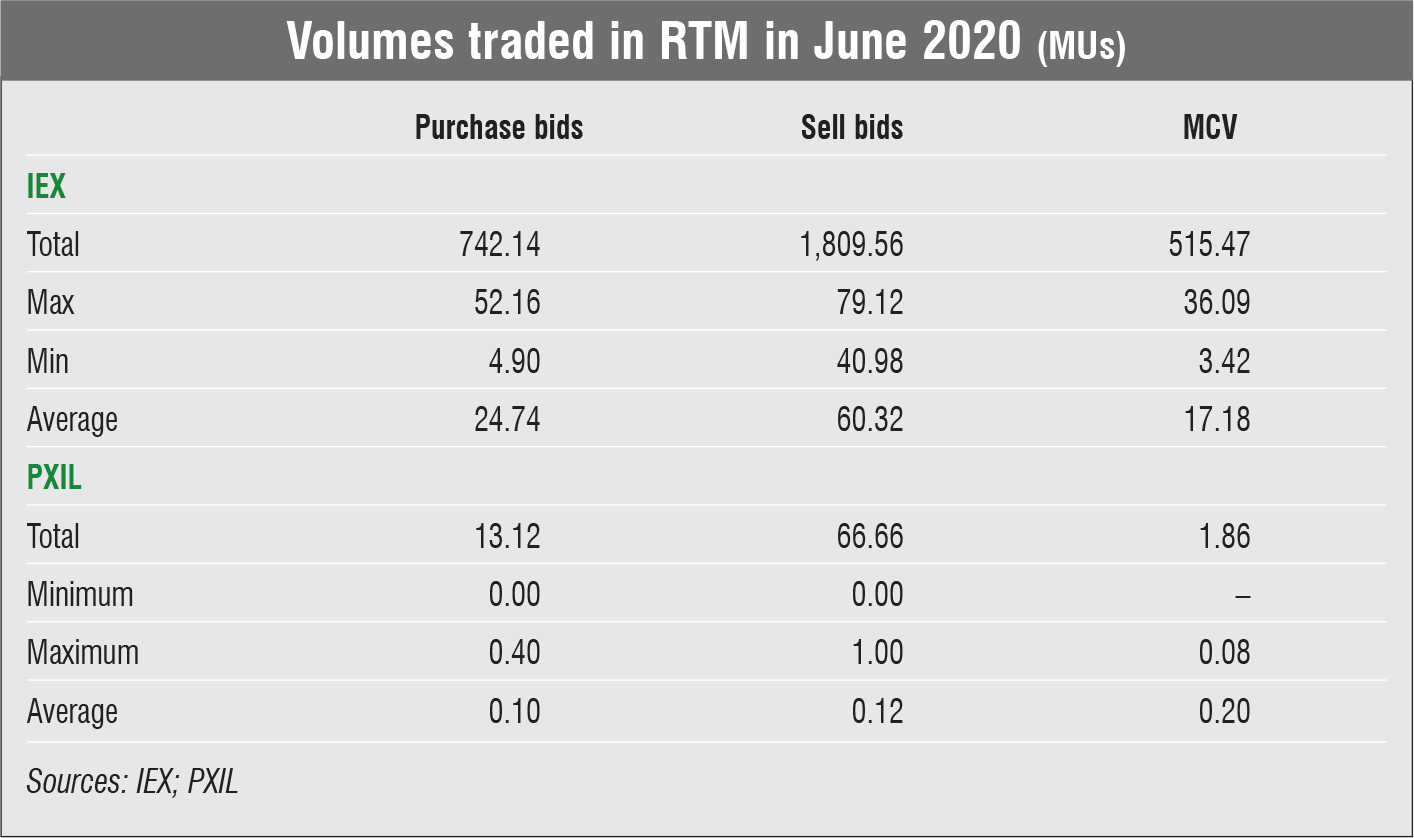 Trading on the RTM

The RTM is a half-hourly market with 48 auction sessions of 15 minutes each. The auction sessions are conducted during even time blocks of the hour and power delivery commences one hour after gate closure of the auction. The price and quantum of electricity trading is determined through a double-sided closed auction bidding process with a uniform market clearing price. Buyers and sellers have to obtain a clearance from load despatchcentres for network availability. The power exchanges publish the area clearing price (ACP) and the area clearing volume (ACV).

The trading process is divided into four key sessions – bid, matching, financial settlement and results. There are 48 bid sessions of 15 minutes each in the entire day, with the first session starting at 10:45 p.m. There is a 15-minute gap between two bid sessions. There can be single bids for different price and quantity pairs or there can be block bids for any 15-minute block or a series of 15-minute blocks during the same day. At the end of the bid session, bids for each 15-minute time block are aggregated and matched using a double-sided closed auction methodology. The ACP and ACV are determined for each block of 15 minutes. These are common for selected buyers and sellers. Selected participants are intimated about their bids in one time block after the closure of the auction period.

For avoiding non-payment issues in financial settlement, the bid limit is set in accordance with the funds available in the accounts of participants. Pay-in and pay outs are done on the day of trading or the next day. Finally, in the result session, the power exchanges intimate the ACP and ACV. They send the final results for confirmation and application for scheduling of these transactions to the National Load Despatch Centre (NLDC), which then shares these details with the SLDCs and these transactions are incorporated in the daily schedules. Once a transaction is scheduled, it is considered delivered. 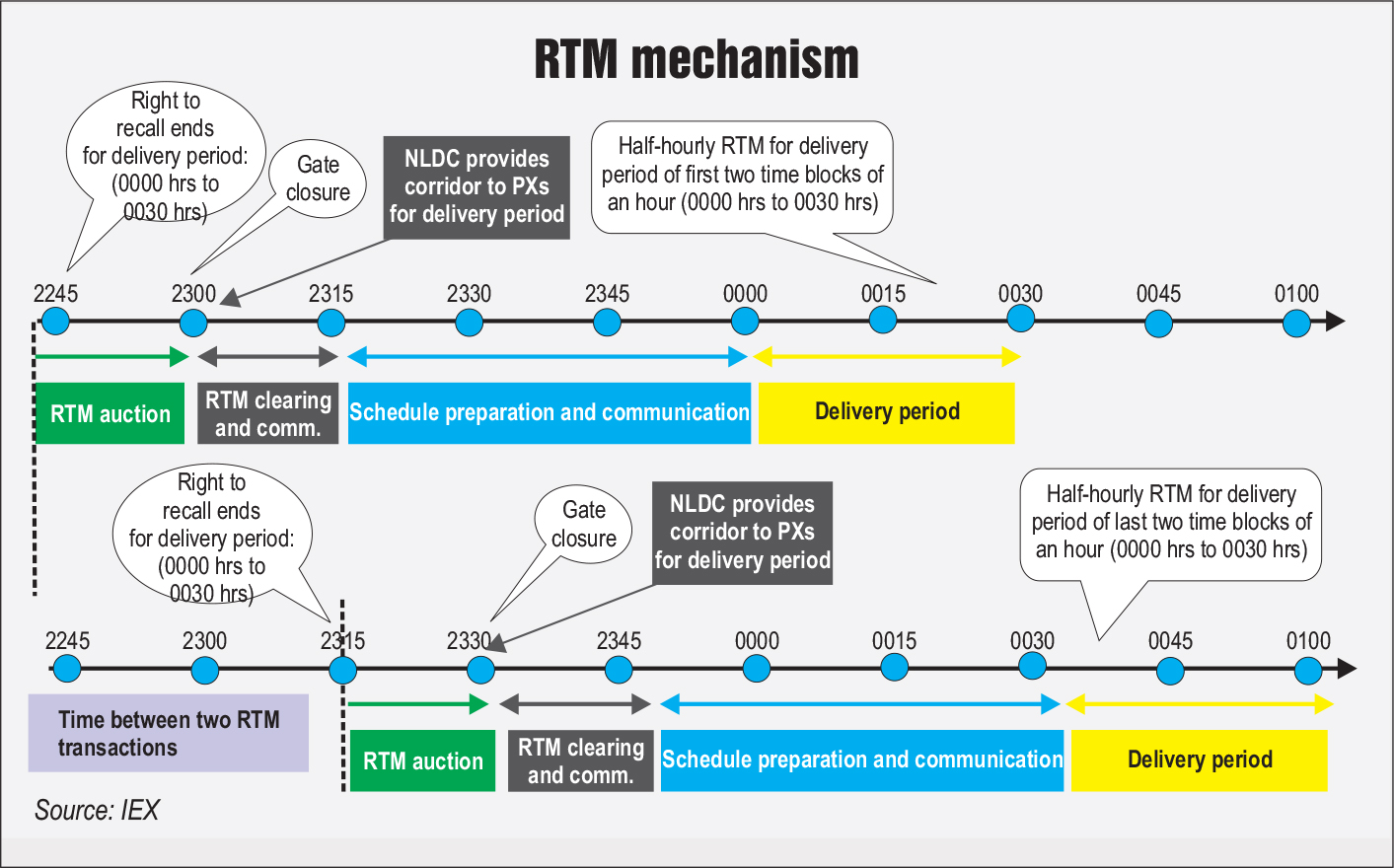 In June 2020, the first operational month of the RTM, the IEX’s platform recorded a cleared trade volume of 515.46 MUs with participation from a total of 237 customers. The single-day highest cleared volume was witnessed on June 30, with 36.09 MUs traded and participation from 110 customers. Since it was the first month of the trading platform, the supply volume at 1,810 MUs was 2.4 times higher than the purchase volume of 742 MUs. The average market clearing price stood at Rs 2.22 per unit, lower than the day-ahead market average price of Rs 2.35 per unit for June. Since the platform also serves generators that want to purchase power for complying with their contracts, Raipur Power and Raigarh Energy Generation became the first generators to have bought electricity through the IEX’s RTM to meet their commitment. On the success of the first month of the RTM, Rohit Bajaj, head, business development and senior vice-president, IEX, said “The milestone of 515.46 MUs in the first month is really an impressive accomplishment and has been possible due to the robust fundamental value proposition of this new market segment. The technology enablement, capacity building and other customer-centric solutions that we provided supported the market to a great start and indeed enabled the IEX to reach this high point in a span of just a month.”

The first month of the RTM saw total sell bids of 66.66 MUs and total buy bids of 13.12 MUs on PXIL’s trading platform. The total cleared volume was 1.86 MUs. According to PXIL data, the first trade on its platform was conducted by the clients of Kreate Energy Private Limited and PTC India Limited. The initial auction sessions also saw participation from the discoms of Telangana, Meghalaya, Manipur, Sikkim and Jharkhand.

The launch of the RTM comes at a time when power generators in both conventional and renewable sectors are suffering due to non-payment of dues from discoms. Other avenues of selling power like open access, group captive and captive power arrangements are suffering due to uncertain regulations, lack of project visibility and discom reluctance. Thus, the RTM provides generators a much-needed opportunity to sell their power with flexible pricing and time periods based on their energy generation. This will also help them save on huge penalties.

Discoms will be able to make use of this flexible power reserve for matching demand and supply. Discoms can manage the intermittency of renewables by selling power on the RTM in case of oversupply and procuring power in case of under-supply. The RTM is also expected to help in supporting grid operators in making the grid more stable.