The majority of India’s renewable energy capacity has been developed under tenders issued by government agencies, wherein the offtakers are state discoms. The tariff is usually determined through a competitive bidding process. However, it is often argued that project developers generate a minimal return on these infrastructure projects when set up through the auction route. In this discom-driven, low-tariff renewable energy market, corporate or third-party PPAs are proving to be profitable for developers.

A quiet stakeholder in the renewable energy market, corporate PPAs are beginning to capture significant attention across the utility-scale solar/wind as well as rooftop solar segments. Several models of sourcing renewable power have emerged over time. Corporates started sourcing wind and biomass-based power through the captive route in the 1990s. Around 2015, rooftop solar gained traction and now open access solar power has become attractive. Over the past two years, there has been a notable growth in the number of first-time corporate clean energy buyers in the open access market in India. Despite the withdrawal of open access exemptions by various state agencies, this market is adding significant capacity.

On the buyers’ side, globally, a large number of corporates are transitioning from conventional sources of power to renewable energy. In fact, more than 230 of the world’s most influential companies have joined RE100, a global leadership initiative that brings together businesses committed to 100 per cent renewable electricity. Some have quietly been 100 per cent renewable for years; others have set ambitious targets and are trying to meet them. Meanwhile, some others have done little more than to put targets in place. But overall, the traction of renewables has been much higher.

While some of the best examples of corporates moving towards renewables are from the US and Europe, Indian corporates are not far behind. In India, many commercial and industrial (C&I) consumers, both public and private, have been increasingly procuring renewable power through the open access route. The key drivers for them are corporate decarbonisation targets and cost savings given the lower cost of renewable power vis-à-vis grid power.

Growing faster than ever

India presents a large opportunity for platforms focusing on the C&I segment for third-party PPAs. However, the opportunity is limited to a few states at any given point in time due to the ever-changing policy and regulatory landscape. For instance, till 2019, the open access corporate PPA market was extremely active in states such as Karnataka, Tamil Nadu, Maharashtra and Gujarat. Today, Uttar Pradesh, Haryana, Madhya Pradesh and Rajasthan are some of the attractive states for new open access renewable energy projects.

The Covid-19 outbreak has further strengthened the case for corporate PPAs, expanding the potential for this market. The C&I segment, which has been suffering losses due to reduced demand, is looking for avenues to reduce costs, and energy cost reduction will significantly help increase savings for any individual or business. In India, companies can source renewable electricity at a 15-40 per cent discount on industrial electricity grid tariffs, which translates into major cost savings. As a result, this financial year, in spite of the coronavirus outbreak, there is a strong potential to add around 1 GW of corporate PPA projects in India.

In the corporate PPA space, there has been a clear shift from third-party PPAs to group captive PPAs in the past two years. This shift has mainly been due to the withdrawal of open access waivers for new third-party PPAs across multiple states. The group captive project structure continues to offer a complete waiver of the cross-subsidy surcharge (CSS) and additional surcharge. These charges often form a significant portion of the overall open access charges and are less predictable than technical charges such as those for transmission and wheeling of power. The CSS and additional surcharge waiver is a key driver for power consumers to opt for group captive models. The group captive model has been extensively adopted by companies for wind power projects in the past; however, it had a relatively small share in solar power procurement until 2018. After most states removed these waivers for third-party PPA projects, the landed cost of solar power for industrial consumers at the 33 kV level significantly exceeded the cost under the group captive model. It is only in a few states such as Tamil Nadu, Uttar Pradesh, Telangana and Odisha, which continue to offer waivers for third-party sale projects, that the cost difference is smaller.

Another interesting trend in this space has been the changing developer landscape. Mid-sized regional developers have been responsible for structuring most early open access renewable PPA projects as they have had easier access to land and have been better placed to deal with local discoms and regulators. These regional developers have included companies such as Ujaas Energy (focus on Madhya Pradesh), Enrich Energy (Maharashtra) and Rays Experts (Rajasthan). With the growth of the open access market, large-sized IPPs with a national presence, such as ReNew Power, Azure Power and Avaada Power, and other specialised project developers, such as SunSource Energy, CleanMax Solar, Amplus Solar and AMP Solar, have begun to increase their market share considerably. These national developers have the competitive advantage of access to large corporate buyers as well as financing sources with a lower cost of capital. In the past two years, the share of IPPs and specialised developers in the corporate PPA market has increased while the share of regional players has decreased.

On the buyer side, the corporate PPA market was, until 2018, driven largely by large conglomerates such as Infosys, Tata Steel, Dalmia Cement, ACC Cement, Adobe, the Mahindra Group and Hatsun Agro Products Limited. Now, many medium and small companies are increasingly joining the bandwagon. The list of corporate customers served by renewable IPPs and specialised rooftop project developers is impressive and includes companies across industry verticals. 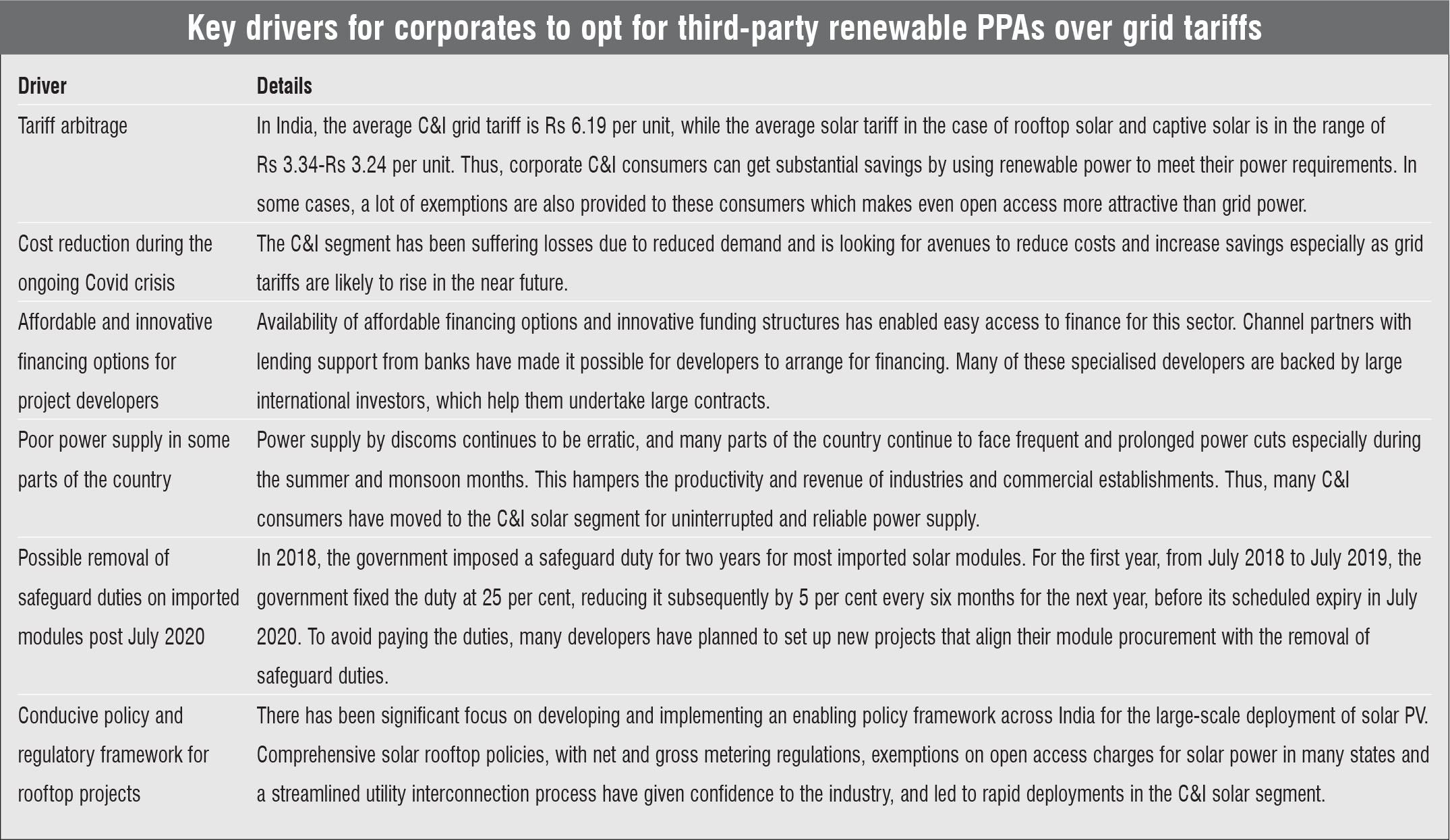 The newer, high-margin industries, in particular, are making huge capital investments or contractual commitments to improve cost certainty and bring down electricity input costs in their supply chains. Meanwhile, electricity-intensive industries with lower margins and less freedom to deploy capital are focusing more on efficiency gains and taking small steps towards renewable energy adoption. These sectors can also benefit hugely from third-party renewable energy PPAs; the more electricity-intensive an industry, the larger the financial savings by locking in long-term lower prices. There are still concerns over the reliability of supply (with insufficient firming of renewable energy), but a virtual PPA can avoid that problem. Under this arrangement, the electricity will continue to come from the grid.

It can be difficult for small companies to participate in PPAs because of the commercial effort required and their lack of bargaining power. However, as project developers get bigger and more sophisticated, intermediaries will begin to offer aggregated offtake products, opening up the market for smaller players. However, the growing IPP focus on this market and increasing corporate action to procure renewable power are not enough. Governments must step up to give businesses the clarity and confidence they need to invest in a zero-carbon future. Currently, there are several policy and regulatory hurdles in the way. 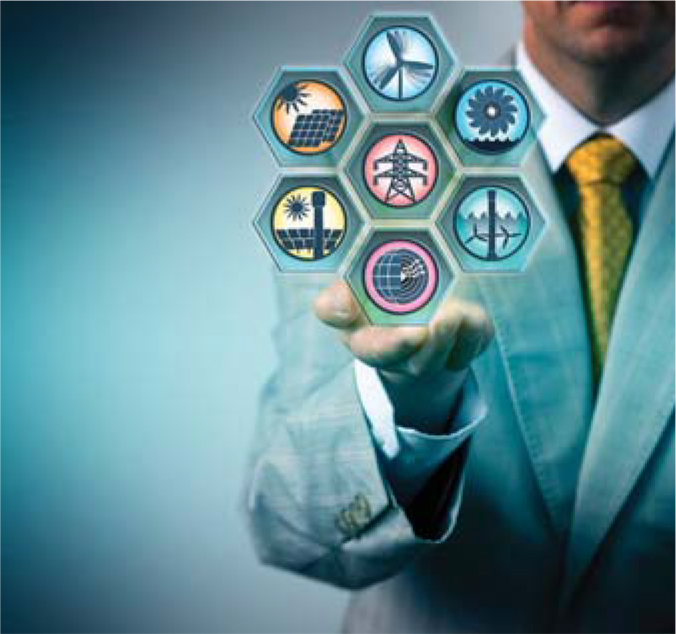 In today’s scenario, where government-awarded projects are facing significant delays due to land constraints, transmission hurdles and tariff uncertainties, corporate PPAs offer a promising proposition. These can be a key contributor to the 175 GW renewable energy capacity target.

However, the single biggest hurdle preventing this market from taking off in a big way is the poor financial health of discoms, which is partly due to operational inefficiencies and partly to their inability to increase tariffs to cover costs. Due to the prevalence of a cross-subsidy model for tariff determination, it will be unfair to take away the discoms’ high-paying C&I customers while they continue to charge agricultural consumers subsidised prices.

Until this issue is resolved and their financial health improves, discoms will not be willing to let go of their high-paying consumers and will keep creating hurdles for developers to set up group captive and open access projects for corporates. Despite progress in Uttar Pradesh and Haryana, getting open access approval from discoms has been a key challenge for the corporate renewable PPA market in these states. The reason often cited for the denial of permission is the technical inability of the local substation to allow drawing of power. It is often difficult to ascertain such technical limitations. Developers are increasingly facing challenges in receiving approvals in states such as Maharashtra, Rajasthan and Telangana.

State-level authorities will also not be able to devise long-term policy and regulatory roadmaps that are not in the interest of discoms. Take for instance the rollback of banking provisions by states like Maharashtra and Rajasthan. Annual banking helps consumers use the excess power generated in peak seasons during non-peak seasons. The rollback of these benefits will prevent developers from selling a part of their generated power, thus increasing power tariffs. Similar changes in other states will likely lead to an overall increase in the renewable power tariffs offered to corporate buyers. Distribution utilities are not providing the necessary support to rooftop solar projects, even though net metering policies are in place in various states.

For the corporate renewables PPA market to grow in a significant way, there is a strong need to create a healthy competitive environment for both project developers and discoms. Serious engagement is needed between the central/state governments and industry stakeholders to solve this problem. While the government is working on a new tariff policy that limits cross-subsidies, penalisesdiscoms for unnecessary power cuts and prevents them from passing their losses to consumers, it must also focus on formulating a long-term plan to address issues across the board. Despite this challenge, the third-party PPA market for renewable energy will continue to grow, even though in select pockets at a time and at a lower rate than its actual potential.