The entire world is in the grip of the coronavirus pandemic, which has spread to 212 countries affecting 1.4 million worldwide as of April 9, 2020. This is a once-in-a-century crisis, which has forced the majority of the global population to stay home, thereby reducing the vehicles on streets to almost nil, grounding the operations of all major airlines and shutting down public transport worldwide. Thus, oil, the fuel used to power a major chunk of transport, is witnessing an unprecedented collapse in demand. Reeling from this tremendous drop in demand, the oil industry is pushing down prices to historic lows.

Besides, the Organization of the Petroleum Exporting Countries (OPEC), led by Saudi Arabia, has initiated an intense price war with Russia. The raging battle for a greater market share, with both sides equipped to pump oil at low prices for some time, has led to a major oversupply in global markets. Historically, low oil prices have led to a boost in demand from consumers. However, this is highly unlikely at present as the lockdown continues in various countries. Thus, a rapid build-up of oil stocks is saturating the markets, further reducing prices. To prevent further damage, an unprecedented agreement was signed on April 12, 2020 among the OPEC members, the US, Russia and various G-20 countries to reduce global crude production by 10 per cent so as to control the downfall in its price.

Oil prices had started falling in February 2020, and the impact of Covid-19 was not factored in. The price declined from $65.37 per barrel on January 9, 2020 to $53.27 per barrel on February 10, 2020, and further to $34.36 per barrel as of March 9, 2020. With the rapid spread of the coronavirus pandemic and ensuing lockdown, the price of oil has dropped to levels not witnessed since the stock market crash of 2002. On March 30, 2020, the price dropped to $22.76 per barrel, sending the entire global oil industry into a panic situation. This has been a major setback for countries like Nigeria that depend on oil exports for their economic stability. Meanwhile, for large crude importers like China and India, this is a good opportunity to significantly reduce their import bills.

The faltering of oil markets is expected to impact industries, the transport sector and energy production. Likewise, a sustained period of low oil prices will affect clean energy investments as oil companies and governments modify their strategies. Renewable Watch analyses the possible impacts of the oil shock on renewable energy investments… 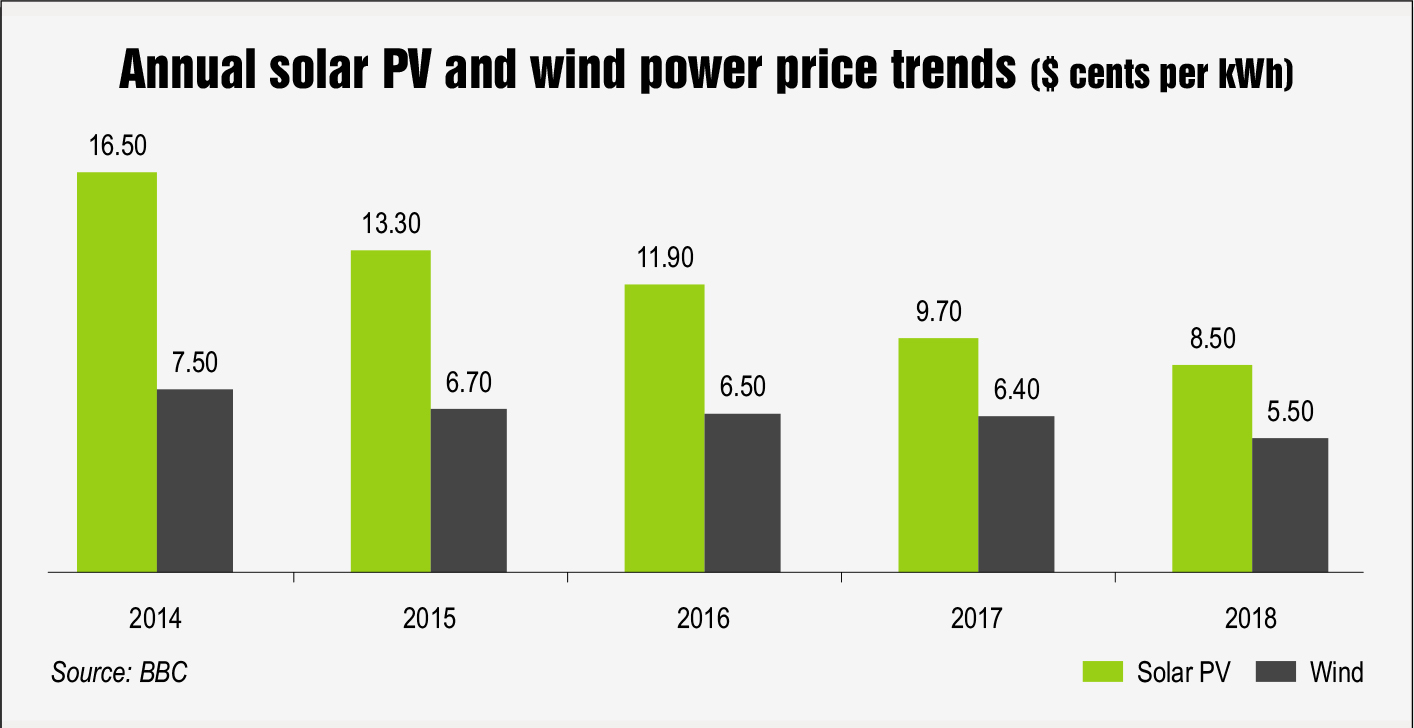 Impact of the oil crash

In the short term, the oil price crash might have a negative impact on renewable energy prospects as various governments have been forced to cut spending, particularly in oil exporting countries. If this happens, renewable energy incentives and subsidies will be among the first to go. Further, low oil prices in oil importing countries might reduce the economic incentives for using the fuel efficiently and conserving it, thus dampening the transition to clean energy. A case in point is the uptake of electric vehicles (EVs) in nascent markets like India. EVs with high capital costs are attractive to buyers largely due to their negligible operating costs when compared to vehicles with internal combustion engines. The rising oil prices were a major reason for their growth. However, lower oil prices might make EVs less attractive for consumers in the short term, especially given the limited options in this segment. In addition, the use of natural gas for transport is relatively less when compared to oil, and thus, gas demand is less exposed to market risks. However, gas demand in industries and power plants will go down due to the economic slowdown. Thus, the gas markets will be required to make adjustments in pricing and supply. This could mean that some oil companies could shift their focus to natural gas production, pushing down prices. This might make solar and wind power less competitive than natural gas for power production.

It is highly likely that the oil price war and the coronavirus will have a short-term negative impact on the global energy transition to clean energy. According to FatihBirol, executive director, International Energy Agency, “The oil price crash will definitely put a downward pressure on the appetite for a cleaner energy transition.” The question here is how long will this uncertainty last and what will be its impact on energy investments in the long term.

Once the lockdown ends, the stalled transport industries will start operations, oil demand will pick up and prices might also rise to some extent. While the oil consumption will increase and go back to normal, the oil shock will have long-term implications for future investment decisions of governments and oil majors.

In the past, to deal with a drop in prices, oil majors have resorted to reducing their clean energy spend and focusing more on exploration activities. However, with prices reaching below $30 per barrel and expecting to remain low throughout the year, these companies are beginning to rethink their strategies. Many large oil companies have already started shifting their focus to clean energy investments. For instance, Total has announced that its target to install 25 GW of renewable power by 2025 and has made a substantial investment in wind energy in France. Similarly, BP has plans to achieve net zero emissions by 2050, while Shell continues to invest heavily in renewables. Meanwhile, Repsol is providing distributed solar solutions for businesses and homes in Spain, and Equinor is diversifying into floating solar.

One of the largest global renewable energy markets, India saw a rise in solar project acquisitions in the first quarter of 2020, even as corporate funding declined due to Covid-19. Oil and gas companies were responsible for more than half of these acquisitions. This can be attributed to renewable energy investments becoming increasingly competitive as renewables, especially solar and wind power, have witnessed a significant decline in tariffs in the past few years led by auctions and enabling government policies. Moreover, oil projects can no longer generate high returns with such low prices. In fact, many large investors have altogether stopped funding fossil fuel projects, which has stranded many projects.

An important driver for the diversion of investments from oil to renewables could be the price volatility of the former, and the global focus on reducing climate change. Oil prices will bounce back and demand will go up as the coronavirus lockdown slowly eases in countries. However, the 2020 oil shock comes close after the 2015 downfall, when oil prices dropped to sub-$40 levels due to booming US shale production and receding geopolitical concerns.

In contrast, renewables provide long-term price stability, with contracts for 20-25 years at a fixed price. Further, their operational efficiencies and increasing competitiveness may drive oil majors to invest significantly in renewable energy projects. 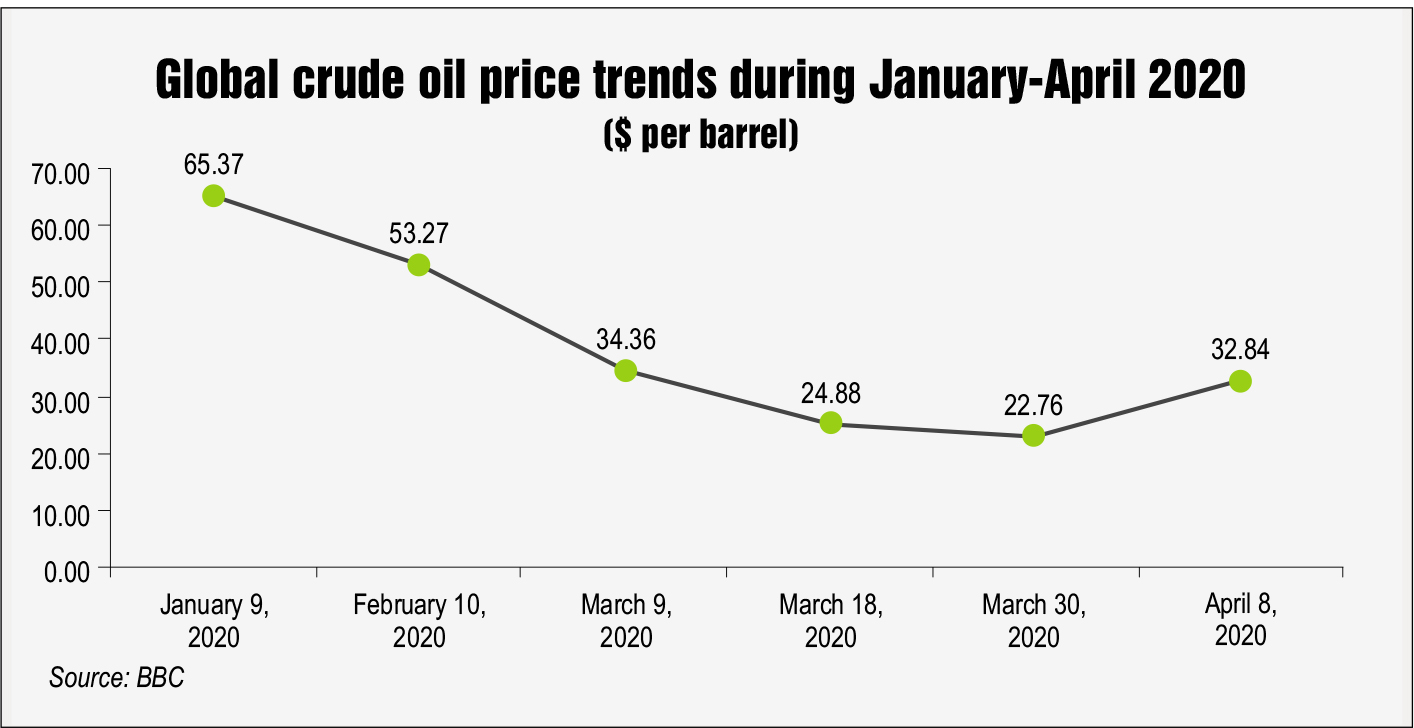 Fossil fuels have been responsible for much of the economic and technological development over the past decades, and oil particularly will continue to witness demand from the transport sector. However, oil prices are volatile, and oil is not only polluting, but has also been responsible for much of the geopolitical instability in the past. Thus, the current oil shock is proof that it is important for countries to diversify their energy sources so as not to take enormous economic hits during such crises. The ongoing coronavirus pandemic emphasises the need for diverse supply chains and self-sustainability of countries to cope with shortages of essential resources. This is where renewables come into the picture. Renewable energy sources are freely available in nature with fixed tariffs for long periods and are quite immune to such events.

While renewable energy may suffer in the short term due to the collapse of oil prices, in the long term it can serve as a turning point for the global clean energy transition. This requires continued policy support and commitment towards targets. As FatihBirol said, “The coronavirus crisis is already doing significant damage around the world. Rather than compounding the tragedy by allowing it to hinder the clean energy transition, we need to seize the opportunity to help accelerate it.”