The world market for floating photovoltaic (FPV) has witnessed increasing growth over the past few years, with the installed capacities of individual projects rising year on year. The two largest FPV systems of 150 MWp each are in China, developed by the Sungrow Group and China Three Gorges New Energy. The global installed FPV capacity has been growing exponentially since 2017, and exceeded 1.3 GWp in 2018. The floating solar segment has been continuously evolving in terms of key players and technology. The players have diversified their offerings to meet the market requirements and have come up with a variety of floating solar technologies.

The floating solar ecosystem is almost similar to that of other solar segments. The key industry players are investors, sponsors, developers, engineering, procurement and construction (EPC) companies, and operations and maintenance (O&M) providers. The ecosystem also includes suppliers of PV modules, float systems, and other equipment and components. Many of these players are active in the ground-mounted and rooftop solar segments. A growing number of developers are expanding their portfolios by setting up floating solar projects. To this end, they are partnering with float suppliers.

Among the players entering the float supply market are inverter manufacturers, developers of large solar PV projects, suppliers of mounting structures, plastic manufacturers, and firms active in related engineering fields, such as offshore and marine industries. Some of them are start-ups while others are subsidiaries of players established in their own industry. Most suppliers have their own proprietary design of floats and floating systems. Some manufacture their own floats while others procure them from third parties. An increasing number of suppliers are also providing EPC and O&M services, with a few offering even full turnkey solutions.

The float suppliers collaborate with EPC contractors or developers to deliver complete FPV solutions. For example, Ciel & Terre International has collaborated with Innova Capital Partners in Colombia, Akuo Energy in France and D3Energy in the US. With regard to anchoring and mooring systems, the suppliers borrow expertise from the marine industry, or even develop in-house expertise through research and development. For example, Sweden’s Seaflex provides anchoring and mooring solutions in the Republic of Korea, India and the US, in partnership with FPV system suppliers. As a result of such collaboration, many float suppliers are able to provide design services, or at least advice related to anchoring and mooring.

Apart from float suppliers, other equipment manufacturers are exploring the development of products and solutions specifically for FPV applications. These products include polymer resins, PV modules, inverters, DC cables, and other mechanical support components.

The electrical configuration of an FPV system is similar to that of a land-based PV system, except that PV arrays and inverters often float on water. The FPV systems can be installed on various water bodies such as industrial ponds, hydropower reservoirs, agricultural ponds as well as man-made water bodies like flood control reservoirs. While all these are mainly inland freshwater bodies, FPV systems can also be built offshore or near shore.

Most large-scale FPV plants have pontoon-type floats, on which PV panels are mounted at a fixed tilt angle. A floating structure may consist of pure-floats, or floats with metal trusses, or special membranes and mats. The platform is held in place by an anchoring and mooring system, the design of which depends on factors such as wind load, float type, water depth and variations in the water level.

Pure-floats: Pure-float configurations use specially designed buoyant bodies to support PV panels. The Hydrelio floats offered by Ciel& Terre International are examples of pure-floats. These include two types of floats. The main float supports the PV modules and provides an optimum tilt to the module and the secondary float ensures connection with the main floats and provides sufficient spacing to limit the shading of PV modules. The secondary float is also used as a maintenance walkway. This type of floating structure has established itself as the most common solution. The pure-float designs by Sungrow are similar. The pure-floats offered by Sumitomo Mitsui Construction feature a more regularly shaped float that ensures dense packing and thus facilitates transportation.

Pontoons and metal frames: Another common design is metal structures (frames or trusses) to support PV panels. These frames affix the structures to pontoons that provide buoyancy. In this case, there is no need for specially designed floats. In these structures, capped pipes are used with technical specifications similar to those of pure floats in terms of strength, non-toxicity and durability. The pipes may be easier to obtain locally than pure floats. Such platforms are offered by companies such as 4C Solar and Koine Multimedia. Alternatively, the metal trusses can be built on floats of other shapes. NRG Energia, Takiron Engineering and Scotra are providing these technologies. Meanwhile, Solaris Synergy provides a metal frame solution that stands on four specially designed floats and each floating assembly supports several PV panels to form a unit. 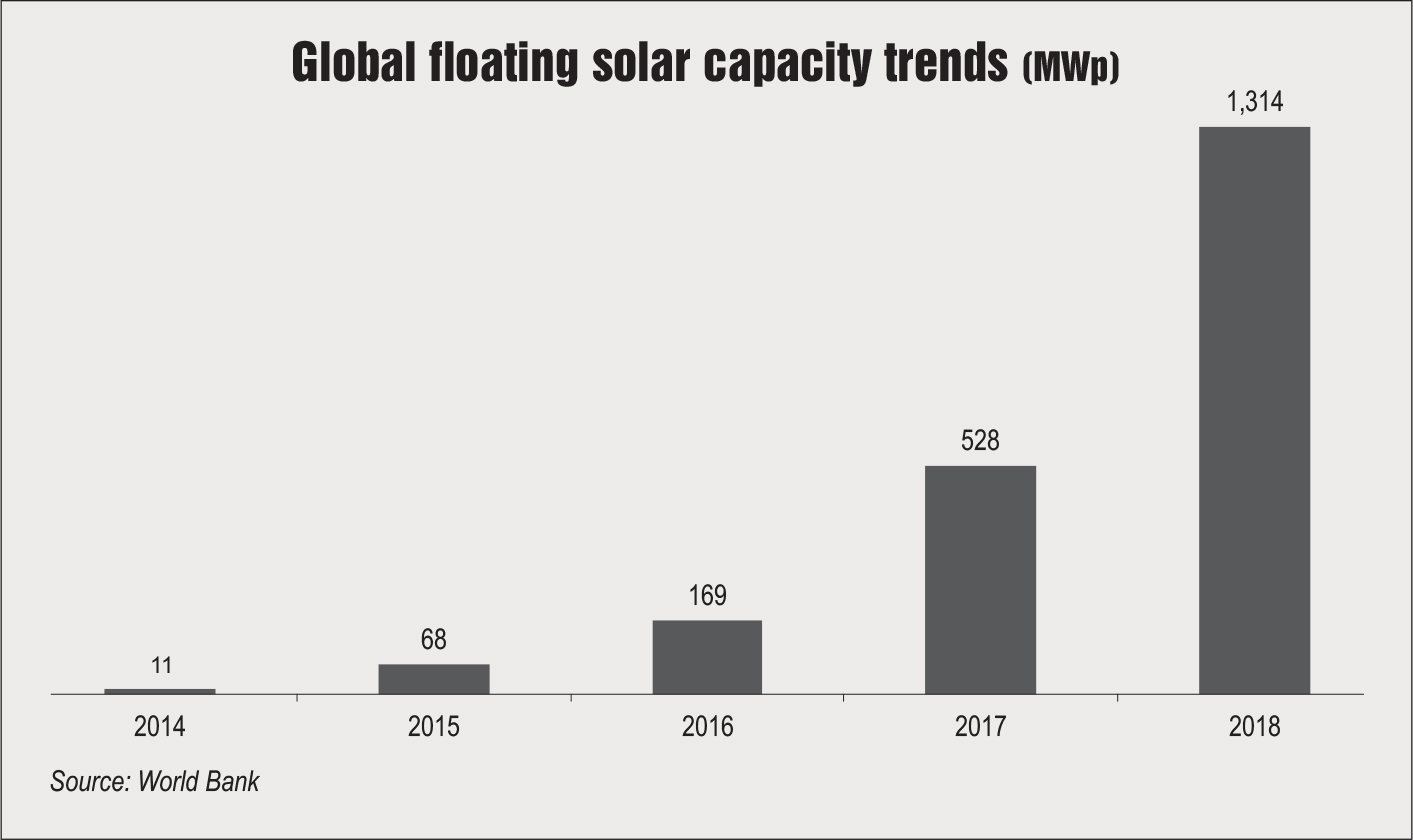 Membranes and mats: Another type of platform is created by simply covering the entire water surface with rubber mats to create a base for the PV installation. Although not as common as the previous two types of platforms, this option is being explored by the Continental Corporation and other companies. Covering the entire water surface is particularly suitable in desert areas to prevent evaporation losses and save water for irrigation or drinking. This technology may not be easily scalable. At the moment, it is more suitable for small-scale systems on reservoirs or irrigation ponds that are 100,000-200,000 square metres in size. Ocean Sun provides this technology. It uses large, round membranes fixed to a floating ring up to 72 metres in diameter.

All in all, various innovative technologies are available in the market. These technologies have several advantages and disadvantages, and specific use cases. A growing number of technologies have helped developers execute floating solar projects in diverse geographical conditions. Going forward, the deployment of FPV will gain traction as technologies mature, facilitating the global expansion of renewable energy and creating opportunities for many countries and markets.