Growth in the solar power segment can be attributed to a host of factors such as fall in tariffs, policy push, ambitious targets and offtaker interest. The utility-scale solar installed capacity had crossed 31.3 GW as of December 2019. As against a target of 7.5 GW for the segment, just above 5 GW was achieved during the period April 2019 to December 2019. This translates into about 2.5 GW to be installed during the last quarter of financial year 2019-20. In the rooftop solar segment, the installed capacity has grown to 2.3 GW. However, only 0.5 GW was added during this financial year as against a target of 1 GW. Capacity installation in the solar segment directly impacts the market for solar inverters, which has seen a high growth trajectory.

The market for inverters seems to have undergone a downward shift over the past year. According to BRIDGE TO INDIA, the market witnessed a cumulative installation of 6,320 MW during the 12-month period from October 2018 to September 2019. It marked a 16 per cent decline as compared to the 7,589 MW capacity installed during the corresponding period of October 2017 to September 2018.

During October 2018-September 2019, the Toshiba Mitsubishi-Electric Industrial Systems Corporation (TMEIC) occupied about a quarter of the market, with a share of 24.2 per cent. It was followed by Huawei at 19.9 per cent, Sungrow at 15.5 per cent, TBEA (previously known as Tebian Electric Apparatus) at 11.3 per cent, and ABB at 11.1 per cent. The top five inverter manufacturers together accounted for 82 per cent of the total market. Other notable players included Delta (5.7 per cent), Hitachi (5.1 per cent), Kehua (3.2 per cent), GE (1.3 per cent) and Schneider (1.4 per cent).

The market was more fragmented in the corresponding period of the previous year, with the top five manufacturers accounting for just about 70 per cent of the market. These were Huawei (17.6 per cent), Sungrow (16 per cent), ABB (15.3 per cent), TMEIC (10.5 per cent) and TBEA (10.4 per cent). While the companies in the top order have not changed, the market shares of some have undergone a dramatic evolution. TMEIC’s share saw the biggest jump of about 13.7 per cent, while the steepest fall was recorded by ABB as its share declined by 4.2 per cent.

In contrast, the corresponding period during 2017-18 saw capacity additions in the rooftop solar segment reach 1,538 MW. Delta accounted for over a quarter of this market with a 25.5 per cent share, followed distantly by SMA and Solis at 9 per cent each. Meanwhile, Sungrow occupied 8.3 per cent and Goodwe 7.3 per cent shares. Since then, Delta’s market share has nearly halved while Growatt’s has increased by over 10 per cent.

The contrast in market shares of inverter manufacturers during the periods analysed suggests the dynamic nature of the solar power segment. These fluctuations indicate a growing market share of the rather niche and regional players from Korea and China as compared to global giants such as GE and Schneider. Further, it reflects a shift in the preference of developers for cost-competitive Chinese companies over the more expensive European manufacturers. It is, however, important to note that over the years the manufacturers occupying the top five positions in both the segments have remained largely the same, albeit their market shares have varied. 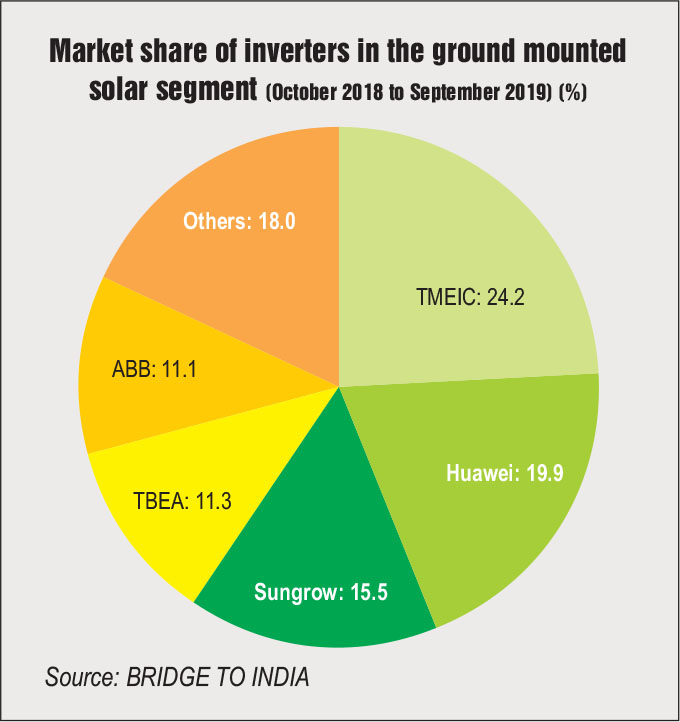 The modularity has now been further explored with microinverters, for rooftop solar systems. A microinverter is connected to a single solar panel and converts the direct current generated at the source to alternating current fit to be used by the consumer. The control and reliability provided by microinverters are considerably better than those of string inverters where several panels are connected to a single inverter. Enhanced modularity results in better generation. Since individual inverters are connected to individual panels, any obstruction or shading on any panel will only impact the associated inverter and not the entire array. This offsets the higher cost associated with more number of microinverters. In addition, it makes the system more reliable.

Microinverters have several other advantages. Being small in size, these inverters can be fitted at the back of solar panels, and do not even require air cooling unlike central inverters. Their modularity ensures low maintenance and operations costs along with monitoring of output; this, in turn, facilitates the isolation and early rectification of faults. Although the initial costs have so far restricted the uptake of microinverters, with their increasing popularity, their prices are expected to reduce considerably. 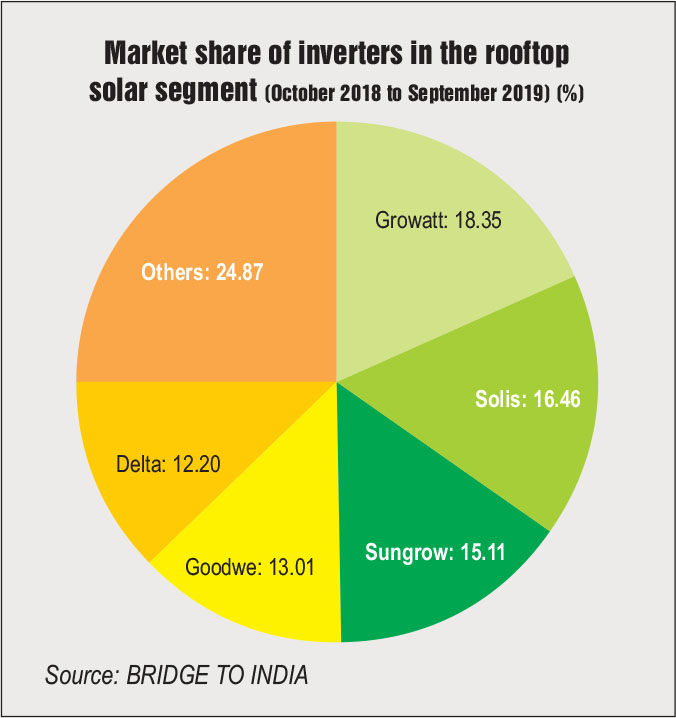 India is looking at installing about 65 GW of solar power capacity during the next three years. This translates into over 21 GW of installed capacity per year. The annual market for solar inverters, therefore, is expected to triple. This exerts a huge pressure on the country’s inverter manufacturing facilities as well as imports.

With the market share now increasing in favour of Chinese and Korean manufacturers, the price of inverters is rapidly becoming a point of consideration among developers. Meanwhile, with import duties and safeguard duties firmly in place, the margins for solar project developers are bound to diminish. In such a scenario, expensive inverters will be less preferred. Therefore, it may be prudent for manufacturers to set up or expand their inverter manufacturing facilities in India to achieve lower product prices.

With ABB’s exit from the inverter business, FIMER will acquire the manufacturing facilities in India, giving it a quicker route to market. The market dynamics are now changing in favour of solar inverter manufacturers that can achieve economies of scale. In the near future, consolidation is expected to cater to the increasing demand for inverters in the Indian market.

As solar technology evolves further and the use of bifacial modules becomes prevalent, the uptake of string solar inverters (with their multi-maximum power point tracking) is expected to increase as these are more suited for bifacial application. The shift in technology will also be fuelled by an anticipated growth in rooftop installations as per the government mandate, where microinverters may also find greater acceptance. For the ground-mounted utility-scale solar segment, central inverters are expected to lead, albeit with an increasing share of string inverters.