Fourth Partner Energy is a distributed solar energy company, which was founded in October 2010 by three partners. The company believes that the customer, the supplier, the employer, the financier and every other stakeholder is a fourth partner, and hence, the name Fourth Partner Energy. In its decade-long journey in the solar power space, the company has spread its presence to 23 Indian states, having installed over 1,800 projects. The company primarily focuses on the Commercial and Industrial (C&I) segment. To diversify its offerings, it is now building off-site solar parks for open access and also offers renewable energy trading services through bilateral contracts and power exchanges.

The experience so far

A pure play engineering, procurement and construction company at the time of its formation, Fourth Partner Energy’s journey began with the installation of solar pumps and small rooftop projects. In fact, one of its initial projects involved the solarisation of rural ATMs for ICICI Bank. Since then the company has slowly and steadily expanded its scale by adapting itself to market demands and evolving into a project developer. Fourth Partner Energy now offers end-to-end services including site survey, feasibility studies, project design, financial solutions, project execution, and operations and maintenance (O&M) for project life cycle. Fourth Partner Energy has a dedicated, in-house vertical that provides O&M for all projects to ensure maximum plant up-time and optimum power generation. Apart from this team of service engineers, the company boasts of an IoT-based solution for monitoring and controlling its assets across the country.

Fourth Partner Energy’s offerings primarily include capex- and opex-based solar plants, with a higher share in the latter owing to market dynamics and recent rounds of fundraising. The company commissioned eight solar projects with a capacity of 3,116 kWp in Telangana under Solar Energy Corporation of India’s rooftop scheme, in April 2019, and a 1 MW project at the Tirupati Airport in July 2019. In addition, it executed a 10 MW solar power plant for Bharathi Cement at the latter’s manufacturing facility in Kadapa, Andhra Pradesh, in September 2019. The company’s other clients include Walmart, Andhra Bank, D-Mart, Airtel, Britannia, Bridgestone, Unilever, Schneider, NTPC and Axis Bank.

Another offering from Fourth Partner Energy is in the open access area. It is executing open access solar projects in Maharashtra, Tamil Nadu and Uttar Pradesh, where there is policy clarity and regulators are more forthcoming in terms of their attitude towards consumers opting for this solution. To further broaden its portfolio, the company is looking to expand its operations outside India. It has commenced project development in Sri Lanka and Myanmar in the SAARC region, and is slowly expanding its presence in Southeast Asia and the Middle East. As of February 2020, Fourth Partner Energy manages an operational portfolio of over 220 MW of distributed solar assets and has executed open access projects worth over 125 MW. The company is planning to add another 350 MW in the coming fiscal and expects at least 40 per cent of the order pipeline from its existing clients.

One of the earliest investors in Fourth Partner Energy was Chennai Angels, an angel investment firm in Chennai that helps entrepreneurs and start-ups with funding. The company’s first big-ticket funding came in 2018 from The Rise Fund, a global impact investment fund managed by TPG Growth. Fourth Partner Energy raised Rs 4.5 billion from this round of funding. For this transaction, Investec, along with KPMG, acted as the adviser to Fourth Partner Energy and Shardul Amarchand Mangaldas provided due diligence and legal advisory services to The Rise Fund and TPG Growth. This investment has greatly helped the company to increase the size and scale of its projects, and adopt the developer-based or opex-based model. Fourth Partner Energy, which initially focused more on capex projects, has more than 70 per cent of its projects in opex mode at present due to access to capital. The company is expected to utilise the funds for fulfilling its target of managing over 1 GW of distributed solar assets by 2022. The Rs 4.5 billion funding will allow the company to deliver new solutions and expand its operations in Southeast Asia, the Middle East and Africa.

The funding from TPG Growth has opened doors for Fourth Partner Energy to attract investments from other big investors. In January 2020, the company received a Rs 3.56 billion line of credit from Bank of America. This loan marks Bank of America’s foray into commercial solar financing in India. Fourth Partner Energy is expected to use these funds to enhance its solar portfolio in the country by 150 MW over the next year and a half. 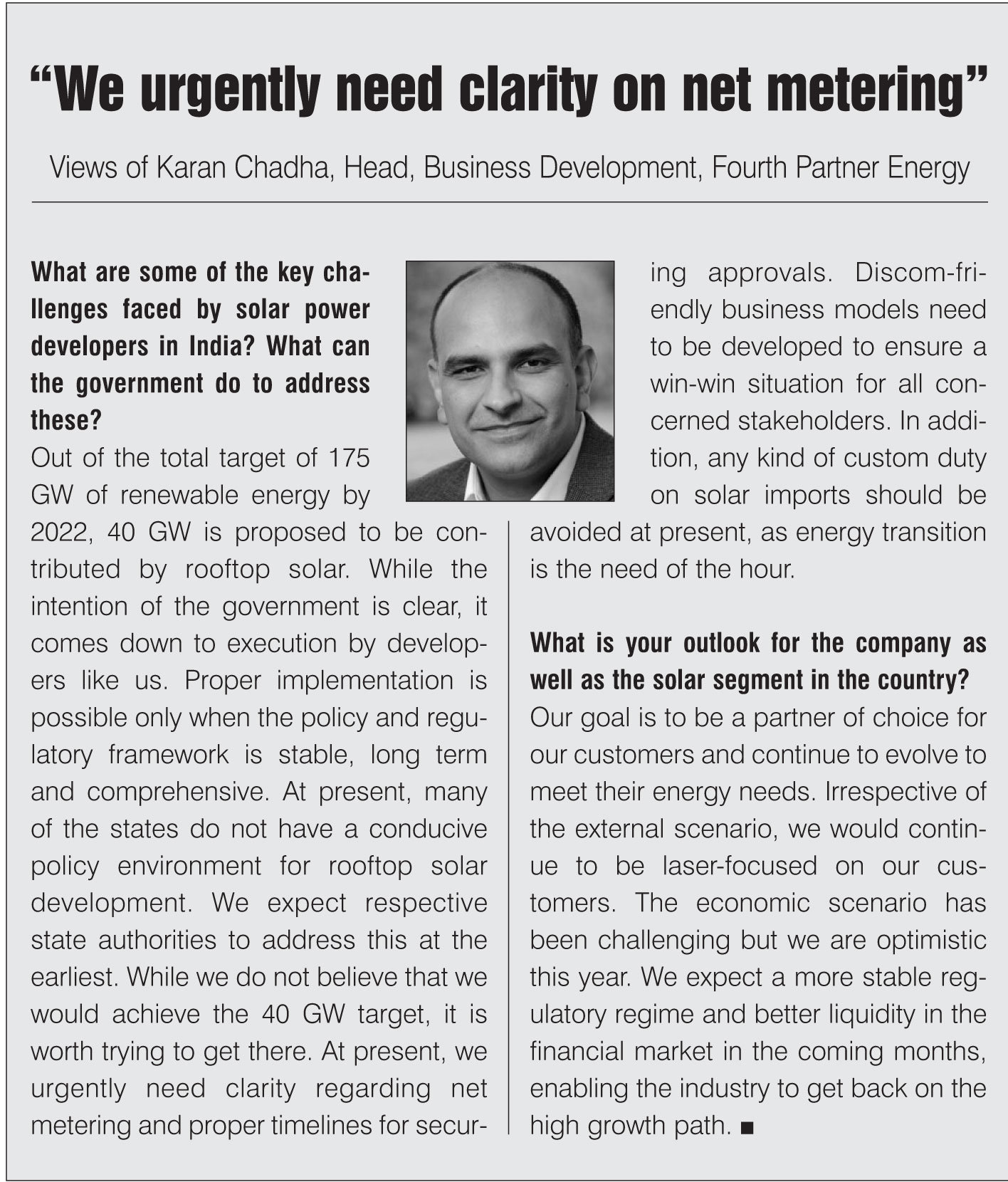 Historically, rooftop solar has not witnessed the same growth as utility-scale solar due to the small scale and size of projects. However, it has shown steady traction in the past five years with a cumulative capacity of around 5 GW. Moreover, the C&I segment has shown the most potential with over 70 per cent of installed capacity. This has attracted many large developers with GW plus portfolios to enter the segment; this  could intensify the competition for the company. However, the company is confident about the high growth prospects in the C&I solar segment due to a large market size, as C&I consumers are always on the lookout for lowest power costs and maximum savings. Fourth Partner Energy’s revenue has grown at a compounded annual rate of 113 per cent in the past five years and its target is to grow it tenfold in the next four years. In the coming fiscal, the company will continue to focus on distributed solar in the C&I segment; alongside open access projects and expanding international operations. It is actively exploring government projects, and feels that once the subsidy disbursal process is streamlined, the market will open up for developers like them. The company also believes that there is a huge untapped potential in India’s MSME space. If the key challenges regarding the long tenure of power purchase agreements (15-20 years) and the lack of creditworthiness are resolved with financial institutions offering “first loss protection” instead of a subsidy mechanism, it will eventually open up this market. To further diversify, the company is planning to partner with technology providers and implement pilot projects in the energy storage and floating solar segments, which are going to be the next big growth areas. It is also planning to foray into the electric mobility space by incorporating electric vehicle charging with solar power.

In sum, Fourth Partner Energy is well poised for growth, given the support from big investors and 10 years of experience, which is much more than many of its peers. Going forward, the company’s foray into open access, international markets and other related growth areas of distributed solar energy is expected to further cement its position in the market.