Financial pressure has been mounting on renewable energy companies owing to the challenges prevailing in the sector. Some of the key issues are inadequate transmission infrastructure, continued under subscription of tenders and inconsistencies in the policy and regulatory framework. These have made a dent in companies’ financials.

Renewable Watch analyses the financial results of select renewable energy companies for the quarter ended September 30, 2019, and assesses their performance and growth prospects…

With a project portfolio of 3.37 GW, Azure Power is one of the leading solar companies in the renewable energy sector. Of the total portfolio, 1.79 GW of capacity was operational as of September 2019, up by 77 per cent from the previous year. Meanwhile, Azure’s operating and committed capacity increased by 200 MW.

The company’s total income from operations grew 28 per cent to stand at Rs 2,846.6 million as against the Rs 2,227 million recorded in the corresponding quarter in 2018. The rise in revenue can be attributed to the commissioning of new projects during this period. Azure Power’s net loss stood at Rs 756.2 million, an increase of 150 per cent from Rs 297.6 million in the previous year. The increase in net loss is primarily due to high general, administrative and net interest expenses, which were only partially offset by the increased revenue.

Wind turbine manufacturer and project developer, Inox Wind registered a total operational income of Rs 1,433.4 million during the quarter ended September 2019, against the Rs 4,416.6 million in the corresponding quarter in 2018, a decline of 67.5 per cent. The net loss for the quarter increased manyfold by over 3,000 per cent to stand at Rs 456 million in September 2019 as compared to a profit of Rs 15.2 million in September 2018. The weak financials reflect seasonal fluctuations owing to a heavy monsoon across India, particularly Gujarat.

After a delay of over 15 months, Inox commissioned 150 MW of capacity in the quarter ended June 2019 and an additional 50 MW in the quarter ended September 2019. The difficult transition period from feed-in tariffs to the auction regime is largely over, barring a few obstacles such as delayed power evacuation. The company is now on an upward path having won a 38 MW order from ReNew Power and tied up 50 MW with Adani.

Following the commissioning of three biomass units in Madhya Pradesh, Rajasthan and Andhra Pradesh through its subsidiaries, the company’s operational capacity now exceeds 500 MW, cementing its position as one of the leading players in the renewable energy space. Currently, the company’s operating capacity stands at 502 MW, comprising 416 MW of wind assets and 86 MW of biomass assets.

The trading of renewable energy certificates (RECs) remained buoyant, generating revenues for the company. Thus, the low turnover recorded by the company has been offset by improved REC realisations and reduced finance costs.

Suzlon’s operations are at a suboptimal level due to liquidity challenges being faced by the company. Earlier this year, the company sold two of its solar subsidiaries to Ostro Energy, a wholly owned subsidiary of independent power producer ReNew Power. The company plans to focus on holistic debt resolution and has submitted a restructuring plan to the lenders. It is working to achieve a feasible resolution plan by segregating the total debt into sustainable debt and unsustainable debt. The lenders have already signed intercreditor agreements and are considering the proposed restructuring. The company is also in discussion with foreign currency convertible bond (FCCB) holders for the settlement of FCCB borrowings. 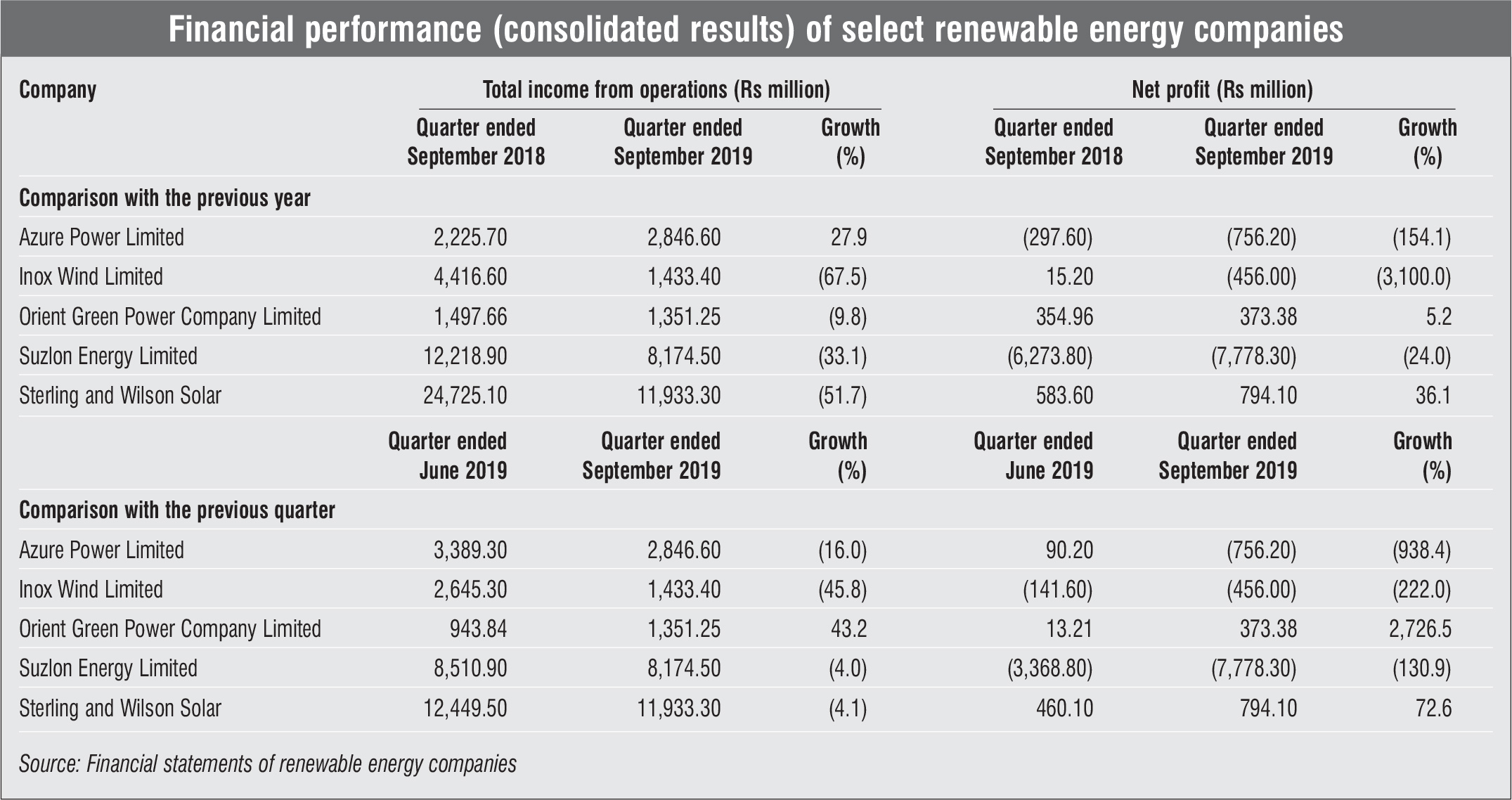 After the launch of the company’s initial public offering (IPO) in August 2019, the promoters have found it difficult to deliver on payments due to the significant and rapid deterioration of credit markets, resulting in a significant liquidity crisis. Further, the IPO registered lower-than-expected realisation, though low working capital requirements have limited its impact on profits.

Companies such as Azure Power, Inox Wind and Suzlon witnessed a dip in financials during the quarter ended September 2019, whereas OGPL continued to thrive. Sterling & Wilson, which recently got listed, has experienced a marginal revenue slide, although it managed to turn a net profit. Even though Azure Power’s revenue in this quarter increased marginally, it was offset by a significant increase in the net loss. Inox wind, which had a relatively small yet positive profit last year, registered a net loss in the quarter under consideration. Meanwhile, Suzlon has been struggling to stay afloat. In contrast, OGPL has grown steadily, mainly owing to its expansion into the bioenergy segment.

Overall, the renewable energy companies experienced a difficult quarter, with revenues either declining, or increasing only marginally, and net losses piling up. Thus, transmission issues and the underwhelming response to tenders resulted in a gloomy period for renewable energy players. That said, the revised bidding guidelines for solar and wind-solar power projects, and strict regulations are expected to drive growth in the sector in the following quarter. 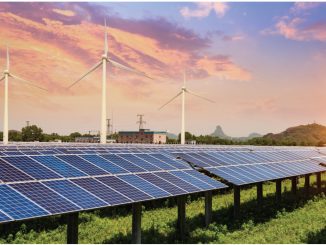 November 2017
India is betting big on renewable energy and companies across countries and verticals are taking notice. There has been a flurry of domestic and inter...
More