Wind-solar hybrid projects have been talked about a lot during 2019 due to the potential benefits they offer over stand-alone solar or wind plants. While only one commercial wind-solar hybrid project of 82.4 MW capacity has been commissioned so far, experts believe that this segment holds the solution to the problem of renewable energy intermittency. The industry estimates the wind-solar hybrid potential to be around 13,902 GW. Of this, the top six states account for 11,791 GW or around 85 per cent of the total potential. These states are Rajasthan, Gujarat, Goa, Andhra Pradesh, Telangana and Maharashtra.

Given the benefits and the potential of these projects, the Ministry of New and Renewable Energy (MNRE) has been actively promoting hybrids since 2018. The policy for wind-solar hybrids was released in May 2018. Storage solutions were included in the policy in August 2018. Since then, states such as Andhra Pradesh have issued independent wind-solar hybrid policies in order to encourage energy generation from these projects. Basis these policies, a number of tenders have been floated by nodal agencies such as the Solar Energy Corporation of India (SECI) as well as various PSUs. As of September 2019, the total wind-solar hybrid project pipeline in India stands at 3,197.4 MW. These projects are at various stages of development. While 1,560 MW or 49 per cent of the total capacity has been tendered, 1,514 MW of new tenders have been announced and are at different stages of bidding.

Renewable Watch takes a look at the key developments, upcoming projects and future outlook for the segment…

The National Wind-Solar Hybrid Policy, which was released in May 2018, has set a capacity target of 10 GW by 2022. Over time, it has served as a guideline for releasing tenders and allocating capacity to bidders as well as a basis for the states to develop specific wind-solar hybrid power policies. The primary aim of this policy is to provide a framework for the promotion of large grid-connected wind-solar systems for optimal utilisation of transmission infrastructure and land, to reduce the variability in renewable power generation, and to achieve better grid stability.

The policy specifies that for fixed speed wind turbines connected to the grid with an AC induction generator, the integration can be on the HT side of AC output bus. Meanwhile, for variable speed wind turbines with inverters, the wind and solar power system can be connected to the intermediate DC bus of the AC-DC-AC converter. The sizing of the system would depend on resource characteristics. At good wind sites, the size of solar components could be smaller and vice versa for better utilisation of transmission infrastructure. An important point of the policy is that a wind-solar power plant is recognised as hybrid only when the rated power capacity of one resource is 25 per cent of that of the other resource.

As per the national policy, new wind-solar hybrid power plants may be used for captive purposes, sale to a third party through open access, and sale to discoms through competitive bidding or at the average power purchase cost under the renewable energy certificate mechanism. Power procured from hybrid power systems could be used to fulfil solar and non-solar renewable purchase obligations in proportion to the rated capacity.

It is noteworthy that the policy has waived additional transmission charges for the hybridisation of existing wind/solar power plants. This is a step in the right direction to utilise the existing transmission capacity of the project and build on the synergies offered by hybridisation. The bidding parameters will include minimum firm power throughout the day or for a defined number of hours, the extent of variability in output power, the unit price of electricity, etc. At the same time, storage may be added to hybrid power plants. As per an amendment issued in August 2018, the term “storage” was redefined in the policy to include any form of storage such as batteries. The word “battery” was removed from the relevant sections of the policy. 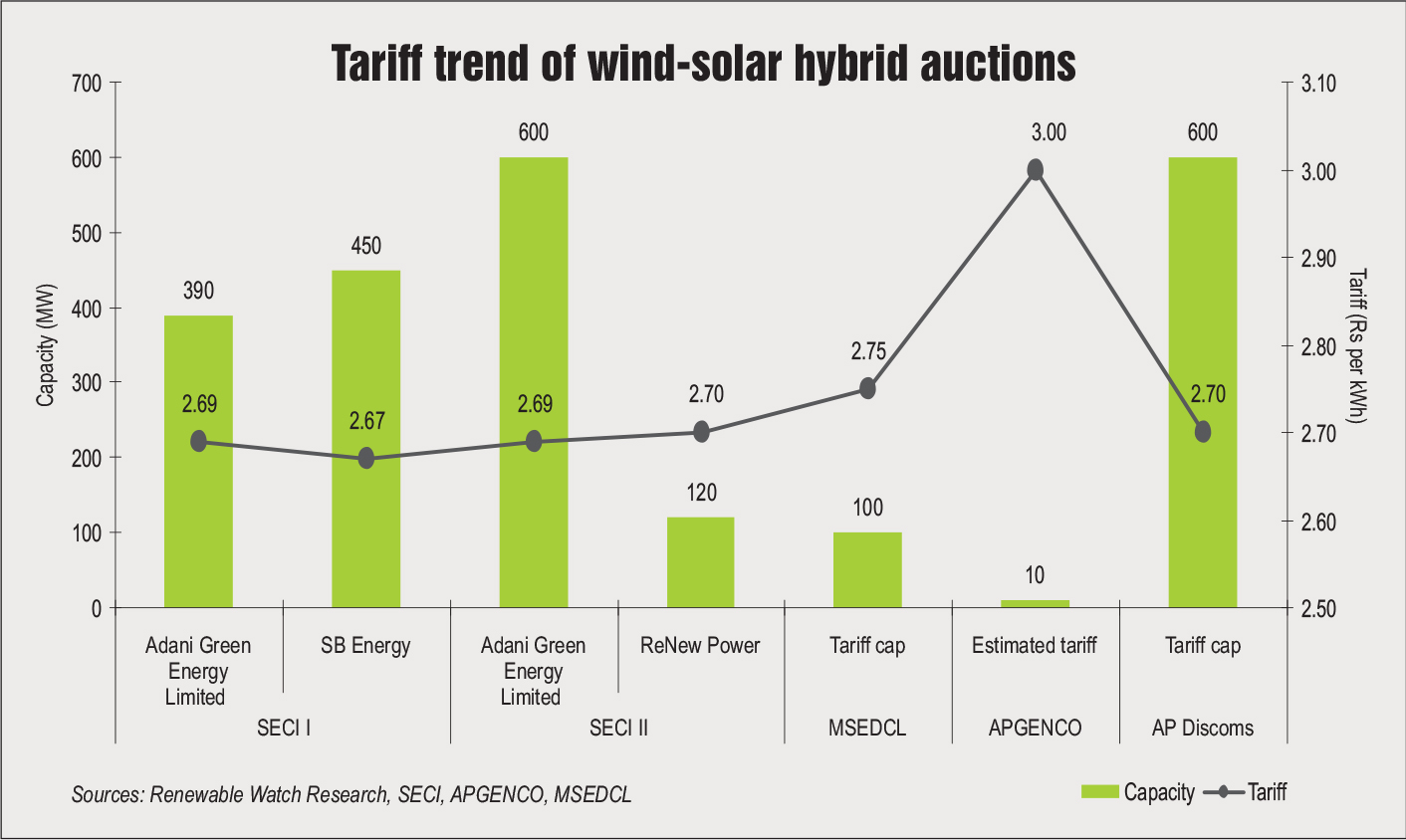 So far, SECI has tendered two tranches of wind-solar hybrid projects. Tranche I witnessed heavy undersubscription, forcing the agency to reduce the originally tendered capacity of 2,500 MW to 1,200 MW, which was further undersubscribed by 150 MW. Finally, only 840 MW of capacity was allocated at tariffs ranging from Rs 2.67 per kWh to Rs 2.69 per kWh. Only two bidders participated and bid aggressively to achieve such low tariffs. While the capacity utilisation factor (CUF) of wind-solar hybrids is high, the capex is also considerably higher. However, cost synergies may enable viability at such low tariffs.

SECI’s Tranche II tariffs were equally aggressive. A capacity of 1,200 MW was tendered but undersubscribed by 300 MW due to the aggressive tariff cap. Finally, 720 MW of capacity was allocated. Two more tenders were recently announced by state agencies with a tariff cap of Rs 2.70 per kWh and Rs 2.75 per kWh respectively. The tariff for another tender, which was recently announced by APGENCO, has been estimated at Rs 3 per kWh. However, this is a small tender with only 10 MW of capacity. Meanwhile, some tenders have been cancelled due to land allotment issues. These include a tender by NTPC for the expansion of its Kudgi pilot project, which was earlier revised from 190 MW to 176 MW, and a 600 MW wind-solar-storage tender by Andhra Pradesh.

Undersubscription of two of SECI’s mega tenders can be attributed to factors such as low tariff ceiling. As a result, only developers with deep pockets and vast experience have been able to bid for hybrid power capacity. Comparatively small developers, in respect of finances and size, have refrained from participating in these bids. According to Renewable Watch Research, over the next one year, the upper ceiling might move up marginally although market forces and the decreasing capex might bring it back to the current levels in the next two to three years.

Experts believe that the low-tariff regime will continue in the long term, in tandem with the tariff trends of pure-play wind and solar power plants. The tariff caps fixed in the upcoming tenders also point towards this trend. However, if the upper ceiling is not removed, the wind-solar hybrid power segment might not take off in the way envisaged by the government.

Wind-solar hybridisation enables the sharing of power evacuation infrastructure and is especially beneficial in the present scenario where transmission availability is limited. Hybrid power plants optimise energy injection and enhance grid stability by allowing plants to achieve CUFs of 40-45 per cent, depending on regions and wind speeds.

While the hybrid power segment holds significant potential, focused growth strategies will need to be deployed to gainfully exploit it. A recent announcement of a 40 GW plan by the central government is expected to improve confidence in the segment and pave the way for a streamlined capacity growth. For these projects, high potential border areas have been identified with around 30 GW of capacity in Kutch, Gujarat, and 10 GW of cumulative capacity in Bikaner, Jaisalmer and Barmer, in Rajasthan. SECI, along with Power Grid Corporation of India Limited and the Central Electricity Authority, has been tasked with developing the transmission capacity in these areas.

A well-defined capacity addition roadmap, specific synergies, greater affordability of storage systems and various other growth factors are likely to drive the wind-solar hybrid market over the next few years. However, a strong policy push, tariff correction and better access to finance will be critical to the success of this segment.