The wind power segment entered a phase of turbulence as it transitioned from the feed-in tariff (FiT) to an auction-based regime in 2017. While the latter has helped bring down wind power tariffs to a level comparable with solar power, neither the annual capacity addition plans nor the tender trajectory has shaped up as expected. The capacity addition in 2017-18 and 2018-19 stood at 1.9 GW and 1.5 GW as against the targeted capacity of 4 GW per annum for both the years. In comparison, capacity addition in 2015-16 and 2016-17 stood at 3.4 GW and 5.5 GW, respectively. On the tender front, the government has managed to allocate over 11.5 GW of projects but with great difficulty. Project execution has been even more challenging due to lack of adequate evacuation infrastructure and land constraints. The majority of the auctioned capacity, therefore, faces the risk of delayed commissioning.

If this was not enough, the price points discovered under the auction regime have put a number of FiT-based projects at risk. The latest example is the ongoing crisis in Andhra Pradesh, where the new government has announced its decision to review and renegotiate power purchase agreements (PPAs) made during the previous government’s regime under the FiT mechanism. According to an order released by the government, “In order to ensure that consumers are provided with affordable power and discoms are pulled out of the financial distress, there is a need to review and renegotiate the exorbitantly priced wind and solar PPAs.” In effect, the new government is seeking to withdraw 21 PPAs with renewable energy companies. The government order also announced the formation of a High Level Negotiation Committee “to review, negotiate and bring down the high wind and solar energy purchase prices”. 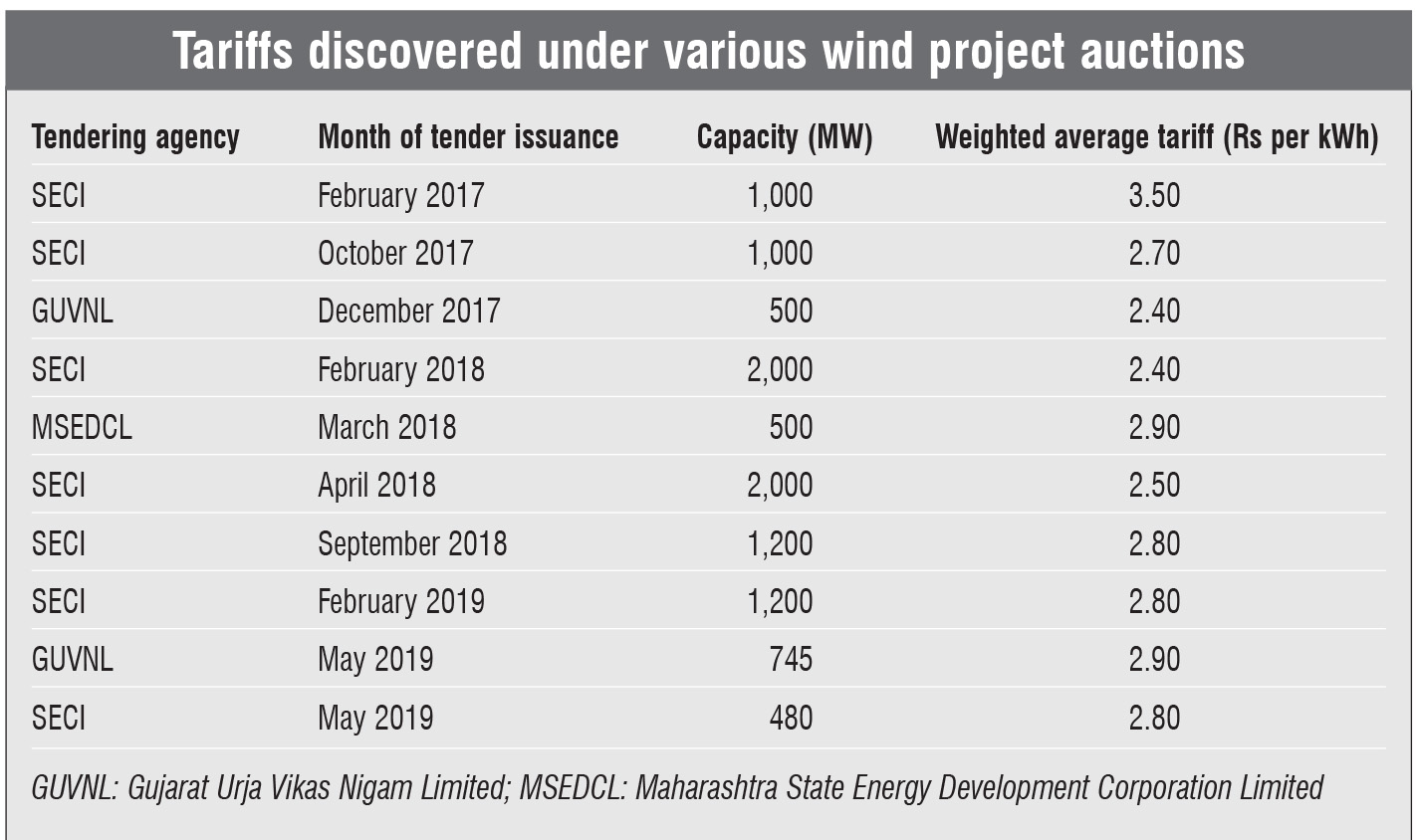 The stand-off between the Andhra Pradesh government and the operators has put nearly 5.2 GW of renewable capacity in the pipeline under threat. This includes nearly 3.9 GW of wind capacity. Many also worry that a government reneging on its contract sets a dangerous precedent.

If this was not enough, the Andhra Pradesh government also began curtailing wind power till it was pulled up by the Andhra Pradesh High Court. The backdown of solar and wind power generation attracts penalties under the state’s electricity grid code, which gives renewable energy projects “must-run” status. Thus, the APERC can take suo moto action against the state load despatch centre.

The stand-off between the state and the operators has put nearly 5.2 GW of renewable capacity in the pipeline under threat. This includes nearly 3.9 GW of wind capacity. Many also worry that a government reneging on its contract sets a dangerous precedent. Besides, there are challenges in almost all nine wind-rich states. The issue of payment of dues by discoms has added to the woes of developers across states such as Telangana, Tamil Nadu, Andhra Pradesh, Karnataka and Madhya Pradesh. Payments have been due for 12-18 months and this has been corroborated by the independent power producers (IPPs) operating in these states. In contrast, Maharashtra and Rajasthan discoms, which did not perform as well earlier, are now paying on time, but these states are not preferred by developers for setting up new projects due to transmission constraints. At the beginning of the auction-based regime, a number of developers opted for Gujarat to set up projects, but the capacity bid out has not been installed due to confusion over land-related issues between the central and state-level agencies.

What impacts IPPs affects original equipment manufacturers (OEMs) even more as their top line and bottom line are directly proportional to the profit margins of project developers. It is evident that the replacement of the 20-year-old FiT model has disrupted the market and changed the rules of the game. As a result, local manufacturers have lost their advantage. The impact has started to show, if not in their market shares then in their financials. Suzlon Energy missed the repayment of an outstanding $172 million principal on notes due in July because low orders have dried up its cash flow. Inox Wind Limited has posted losses in the past two financial years. Going forward, the market structure will change as growing competition from international turbine manufacturers will progressively eat into the market share of domestic manufacturers.

The sector is facing both legacy issues as well as challenges emerging from the transition to the auction regime. The biggest legacy issue for the wind segment and in fact, the entire power sector at present is discom health. UDAY has largely failed to deliver on its promise. 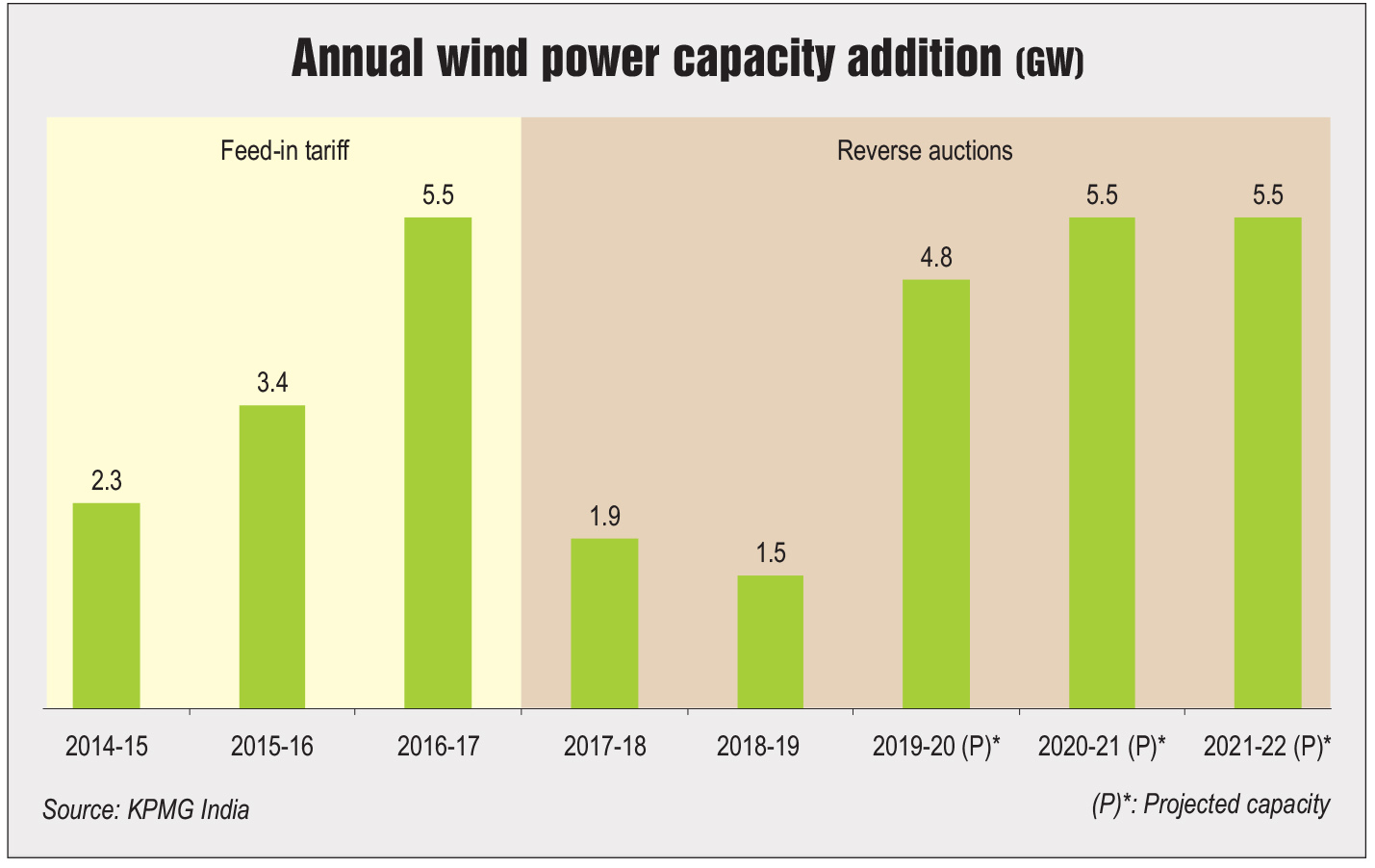 A quick resolution to the aforementioned issues is necessary to revive investor confidence in the segment, provide better visibility to OEMs, and help achieve the central government’s goal of 60 GW of wind power capacity by 2022.

The sector is facing both legacy issues as well as challenges emerging from the transition to the auction regime. The biggest legacy issue for the wind segment and in fact, the entire power sector at present is discom health. Ujwal DISCOM Assurance Yojana (UDAY) has largely failed to deliver on its promise. A recent industry report notes that AT&C losses came down by only 400 basis points and the average tariff increase was a paltry 3 per cent per annum from pre-UDAY levels. Discom debt stands at Rs 2.3 trillion. If unresolved, discom health will become the single largest roadblock in India’s energy transition to renewables. Meanwhile, the shift from FiT to a competitive bidding mechanism has been accompanied by regulatory uncertainties, political pressures and changing project economics. It hurts investor sentiment when discoms ask for renegotiation of PPAs for projects that are already operational. The reluctance of discoms to sign new PPAs (if the price discovered through bidding is higher than the lowest bid under some other tender) and the poor financial he-alth of OEMs due to falling tariffs have also contributed to the slowdown in the wind segment.

Going forward, there will be two major factors that will determine the expansion of wind capacity in the near future. The first is the stabilisation of the auction regime and the second is the willingness of buyers to step up the procurement requirement and  bid on a larger scale. This may be difficult in the short run as buyers are looking for predictable and flexible generation to meet the unpredictable peak demand, which is often satisfied by thermal power. In order to move away from thermal power, renewable integration into the transmission grid needs to increase. Real-time and ancillary services markets need to evolve to manage these issues. Old assets need to be retired in time, which requires integrated planning and policymaking.

The market is expected to stabilise at some point. However, policymakers should not apply artificial caps to tariffs, or cancel bids if the tariff level is lower than expected. As long as the tendering process is fair and transparent, the price quoted by developers should be treated with utmost seriousness. Land issues and transmission constraints need to be resolved through strong coordination and cooperation among the central and state agencies.

As far as the industry is concerned, OEMs need to understand not only their own business, but also the competitive motivations and business models of peers since it is an auction regime, which calls for fair play among domestic and foreign manufacturers in order to justify and enable the low tariffs that discoms (offtakers) expect from IPPs.

The following stories in this section provide an insight into the changing wind market dynamics, highlight new opportunities, assess the impact of recent policy and regulatory initiatives, discuss the risks and challenges, and present the views of key stakeholders.