His father was into carpet weaving (manual) in Bhadohi village in Uttar Pradesh, but when Sandesh Maurya came to Varanasi, he, like thousands of young men, found work in one of the silk weaving factories. He was, however, barely able to earn nine to ten thousand rupees a month.

“One day I must have my own loom,” and with that goal in mind, he started saving money. He bought land in Damodarpur village. He also bought three looms, not in one go though, from his savings and borrowings from friends and relatives. He had become well trained in the art of weaving, having worked for several years in a factory. However, like all weavers, he too has been facing problems with the power supply. In the beginning, the power supply was for only seven to eight hours, sometimes during the day, sometimes at night. This meant he could work only when the power supply was available, many a time at night. The situation has, however, improved over the past few years in terms of the duration of outage, but the supply is still erratic. The sudden disruption in supply breaks and entangles the thread on the looms. Time is wasted in fixing it; sometimes the damage done is beyond repair and the woven product is wasted.

Taking into consideration all these issues confronted by weavers, big and small, a The Energy and Resources Institute (TERI) project team developed a hybrid solar charging model that ensures continuous flow of electricity to the looms. During the day, the power from the solar panels is fed into the inverter through a solar charge controller. The inverter is then used to run the loom. The surplus power is stored in lithium batteries for back-up. During the evening, or at other times when the supply is not enough, power from the grid is also used to supplement the supply. In case the power supply is disrupted or there is load shedding, the battery backup comes to the rescue of the weaver. The system is devised in such a way that it takes a microsecond for the power to transfer from one source to another, says Jitendra Tiwari, an engineer from TERI, who has devised and designed the system. This means there is continuous flow of electricity without any disruption.

Maurya says he and his wife are able to work for 10 to 11 hours a day because of the continuous flow of power. His earnings have more than doubled. “More than that, I can work without the stress of disruption in power supply to the looms,” he says.

The project has so far helped more than a hundred weavers under the Energy Access for Livelihood Promotion Programme, devised and implemented by TERI, and financed by Indus Towers from its corporate social responsibility funds. The criterion for the selection of the beneficiary is that the weaver should have two to four loom units and should be able to contribute 30 per cent of the total cost of the system (Rs 500,000) in one instalment. The costing of the model is based on the assumption that grid power is available for charging 30-40 per cent of the battery. Sandesh weaves plain dupattas from thread and the finishing and artwork is left to the entrepreneur who gives him the work order. “I don’t want to get into artwork and expand my area of work because then I will have to employ workers. For now, my wife and I are able to manage.”

Like all other “bunker card” (weaver card) holders, Sandesh too gets electricity at a subsidised rate of Rs 75 per loom per month. He is able to weave 10-12 plain dupattas from one loom in a single day.  Gulzar too has benefited from the hybrid solar charging system installed by TERI. His family in village Mahmoodpura Lohta, Varanasi, has been working on the looms for generations, handling e

verything from weaving, designing and zari work on saris, dupattas and cloth from silk or cotton thread to marketing their products. Gulzar’s family owns 10 looms, where work is done in three shifts with the help of about 10 workers. “The hybrid solar system means no disruption of work, which has increased both production and income. Earlier, many a time when electricity was cut, the labour employed had to sit idle. That is not the case now.”

Varanasi, which is the largest employer in the weaving industry, is known not just for Banarasi saris but also for the famous ghats along the river Ganga that attract millions of tourists from across the country and abroad every year. Nearly 3,500 boats take visitors along these ghats. They are either rowed manually or run on diesel or battery. Motor boats are preferred by many tourists as they move fast. The cost of diesel comes to over Rs 300-Rs 350 for a 12 km stretch of the river. Moreover, diesel-run boats cause sound and air pollution. In 2016, an e-boat project was launched to reduce air and noise pollution and also the drudgery of the boatmen. To start with, 11 e-boats were to be run on battery. However, they were not popular among the boatmen mainly because of the cost of transporting four to six lead acid batteries weighing 200 kg (required for the movement of the boat) to the charging station. The drudgery involved in this and the space occupied by these lead acid batteries on the boats were other discouraging factors. These boatmen had to get their batteries charged after every two rounds. 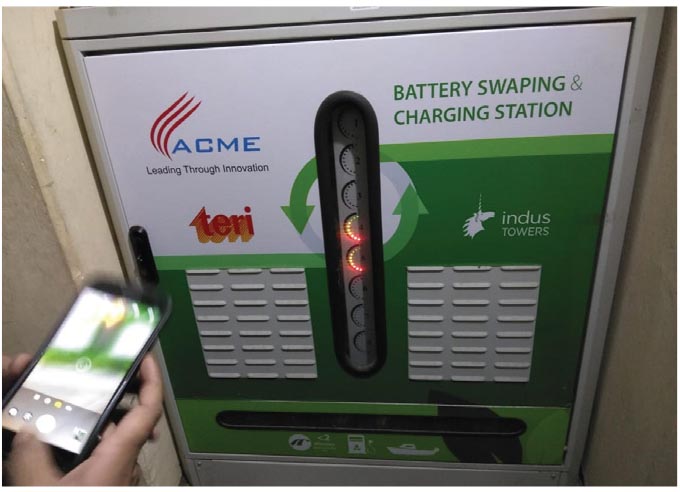 The  hybrid solar-powered model devised by TERI’s engineers, addresses this concern of the boatmen. The model involves the use of just one lithium battery weighing not more than 28 kg. In fact, they are working to use two small lithium batteries weighing 14 kg each to reduce the drudgery of the boatmen, says Tiwari, the brain behind this model. Under the model, there is an option for power backup, from both grid electricity and solar energy, for four to six hours’ operation on an average. Boats are operated in charge and carry mode. Centralised charging stations, operated through solar/grid-connected power, are set up at different locations to provide the charging facility. The model is designed for both the boatmen and entrepreneurs managing the charging station. The charging stations are operated by local energy entrepreneurs. They can levy a fee for charging batteries. So far, four hybrid solar charging stations have been set up for charging the batteries used in these boats. Around 27 boatmen are already using this model and the commissioning of 13 more such boats is in the pipeline.

How does it work? The charged battery is attached to a trolling motor connected to a propeller. One could say, the propeller is like an electronic “chappu” (oar) that pushes the boat backward or forward. The charged battery works for two and a half hours, which is enough for the boatman to make two trips on a 10-12 km stretch. One charging station costs Rs 900,000. The cost of the system retrofitted on the boat is around Rs 250,000. The beneficiaries do not have to pay anything for the system on the boats, which, of course, are owned by them.

Virender Nishad, a progressive boatman, has got two of his five boats retrofitted with this model while two are rowed manually. He has also offered part of his house to be used as a charging station. Virender is not only saving the money he used to spend on diesel, but has also increased his earnings as tourists prefer these boats since they do not make any sound. “I have even begun taking a fee of Rs 50 for charging one battery from other boatmen.” A high school graduate, Virender not only fights for the rights of the boatmen community but is open to all kinds of experiments. He has offered one of his boats for carrying out an experiment on a solar module devised by a professor of Kashi Hindu Vishwavidyalaya. A small canopy over this boat is fitted with solar panels, sufficient to run a trolling motor of 1.5 horsepower. Although this system does not produce any sound, its speed is much less says Virender. “I go by the preference of tourists. If there are more tourists, I can put all my five boats to use by employing workers.”

In addition to reducing pollution, these solar-powered projects have helped in increasing production, raising the income and reducing the drudgery of those employed in the weaving industry as well as in boating operations in Varanasi, one of the oldest cities in India.