In the past, Uttar Pradesh has faced severe criticism due to its poor power supply situation leading to frequent and long power cuts in most towns and cities. In recent years, however, significant improvements have been made in the state’s overall power supply situation, reducing the annual peak power deficit from over 10 per cent in 2017-18 to just 2.1 per cent in 2018-19 as per the Central Electricity Authority (CEA). Even the annual energy deficit has reduced from 1.5 per cent in 2017-18 to 0.8 per cent in 2018-19. Meanwhile, the state has been slowly increasing its installed power capacity to meet the growing energy demand. Notably, the 500 MW of new power capacity added each year on average between 2016-17 and 2018-19 was almost entirely based on renewable energy sources. In fact, the share of coal in total energy generation has dropped from 91.19 per cent in 2017-18 to 90.57 per cent in 2018-19 while that of renewables has increased from 3.46 per cent to 4.39 per cent, mainly on account of significant solar capacity additions.

With roughly 1 GW of commissioned capacity as of May 2019, Uttar Pradesh’s solar power uptake has been limited till now. This can be attributed to the state’s low utilisable solar potential, policy irregularities, poor power supply infrastructure and unavailability of adequate land near major load centres. For making solar power development in Uttar Pradesh attractive for both developers and investors, the state authorities have introduced a slew of measures and revamped their existing policies. The state has revised its land allocation laws and stepped up its efforts to expand transmission infrastructure in the solar-rich Bundelkhand and Purvanchal regions. The state authorities are planning to add about 7,250 MW of solar power by 2023-24.

The Uttar Pradesh New and Renewable Energy Development Agency (UPNEDA) has issued three new solar power tenders between July 2018 and January 2019 after the cancellation of a 1 GW tender in June 2018 owing to higher tariffs quoted by developers. The auction for the first tender was conducted in October 2018 for 500 MW of solar power projects to be developed on a build-own-operate basis. The lowest tariff of Rs 3.17 per kWh was quoted by Maheshwari Mining and Energy, and NTPC Limited (RE) to develop 20 MW and 140 MW of capacities respectively.

The second auction for 550 MW took place in December 2018, and witnessed a 5 per cent decline in tariff from the previous auction. NTPC Limited (RE) again emerged as the winner by quoting the lowest tariff of Rs 3.02 per kWh to develop 85 MW of solar capacity. Many of the companies that participated in the second auction had also bid in the first round. This shows increasing developer confidence in the state’s tendering process as many cumbersome approval mechanisms were streamlined. However, the tariffs remained above the Rs 3 per kWh level, which is primarily due to lower solar radiation in the state. Another tender for 500 MW of solar power capacity was announced by UPNEDA in January 2019 with a bid submission deadline of June 17, 2019.

Apart from large solar power plants, the state authorities are extensively promoting floating solar plants. Three grid-connected floating solar projects of 50 MW each are being developed at Rihand Dam in Sonbhadra district of Uttar Pradesh. In November 2018, Shapoorji Pallonji won a bid to develop 50 MW of floating solar power capacity at a tariff of Rs 3.29 per kWh. Meanwhile, Renew Power, which had bid for the entire 150 MW of capacity, was awarded 100 MW. The tariff is yet to be determined by the Uttar Pradesh Electricity Regulatory Commission (UPERC). The power generated from these projects will be sold to Uttar Pradesh Power Corporation Limited (UPPCL).

To make up for the limited available solar potential, Uttar Pradesh authorities have been encouraging large-scale rooftop solar deployment through innovative regulatory interventions. For instance, the Gautam Buddha University in Greater Noida, which has a sanctioned load of 4,000 kVA, wanted to expand its rooftop solar project from 0.5 MW to 3.34 MW for captive consumption. In a landmark order in November 2018, UPERC allowed net metering for a 3.34 MW rooftop solar project, thus relaxing the provisions of the UPERC (Rooftop Solar Grid-Interactive System Gross/Net Metering) Regulations, 2015. Noida Power Company Limited (NPCL) also confirmed that it had no technical issues in providing grid-connectivity for the proposed capacity.

In January 2019, UPERC released the Rooftop Solar Power Plant Regulations, 2019, which raised the cap for net-metered rooftop solar plants from 1 MW to 2 MW. The move is aimed at meeting the energy deficit of the state and reducing discoms’ technical and financial losses. These regulations have fixed a tariff of Rs 2 per kWh for net-metered projects. However, the net metering facility is limited to residential and agricultural categories. Other consumer categories such as industries and commercial and public establishments can opt for gross metering. In doing so, UPERC aims to rationalise benefits for both consumers and discoms. For gross metering, the tariff is determined as the weighted average tariff for grid-connected solar projects of 5 MW and above capacity for the previous financial year plus a 25 per cent incentive. 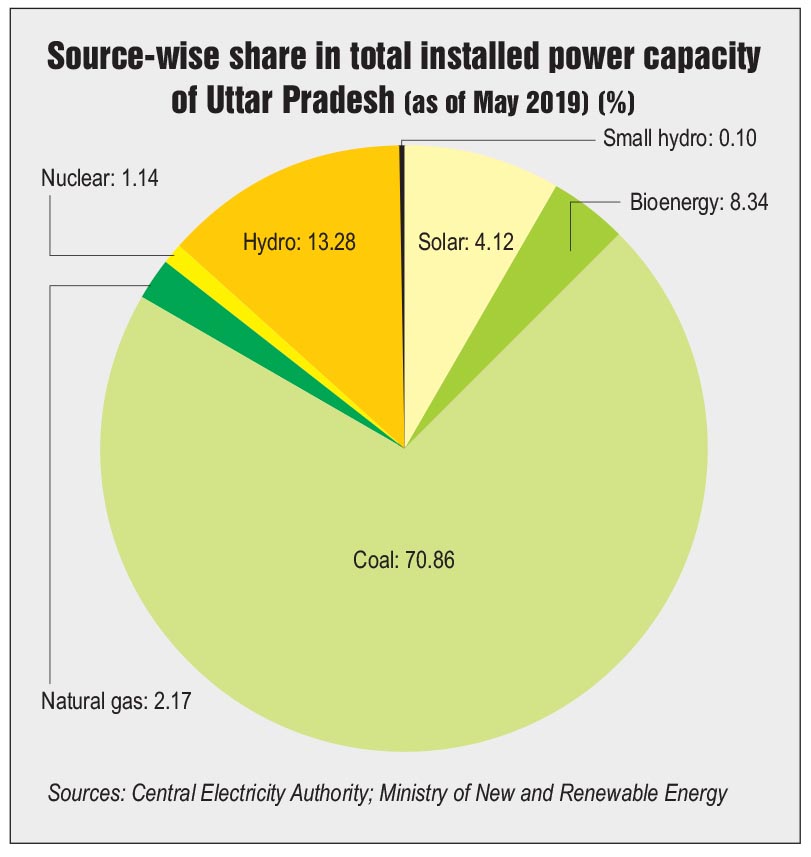 The state authorities are making efforts to increase the use of solar power in rural areas through small solar projects. In June 2019, UPNEDA invited bids for 1,000 units of 1.1 kW solar power systems totalling 1.1 MW to be set up at various primary schools in the rural areas. It has also invited bids for 6 MW of solar power projects with battery backup to be installed at various sites identified by UPNEDA. The bid submission deadline for both the tenders is June 24, 2019. The state has also laid out plans for promoting the use of solar pumps for farmers.

Uttar Pradesh is one of the few states in the country that are allowing large open access projects. The state authorities have sanctioned 485 MW of open access projects as of May 2019. A 70 MW open access solar power project being developed by SunSource Energy is already at advanced stages of implementation.

Uttar Pradesh has about 1.9 GW of installed bagasse-based cogeneration capacity owing to the abundance of sugar industries in the state. These industries use the power generated from bagasse for captive consumption. However, the growth of these projects has slowed in recent years due to power offtake issues and unviable tariffs. To promote this segment and encourage developers to set up biomass projects, UPERC has adopted a transparent approach for project allocation. To this end, the commission disapproved three power purchase agreements (PPAs) for the procurement of 32.5 MW of bagasse-based power in December 2018. These PPAs had been signed as bilateral agreements after mutual consent despite the fact that UPPCL had initiated competitive bidding for the projects. This decision of UPERC prompted UPPCL to propose amendments to the bidding documents for the procurement of bagasse-based power from generators, which were approved by UPERC in January 2019. As per the amendments, an upper ceiling tariff of Rs 4.81 per kWh has been set for bagasse-based power and a separate charge of Rs 0.18 per kWh has been fixed for utilising the existing transmission infrastructure. Further, in May 2019, UPERC directed UPPCL to conduct a transparent competitive bidding process for the procurement of power from cogenerators producing power from bagasse and spent wash.

Apart from bagasse-based power projects, Uttar Pradesh is also one of the few states to promote the uptake of waste-to-energy projects. UPERC has been lenient in approving PPAs for these projects so as to not discourage developers in the already restricted waste-to-energy segment. In May 2019, UPERC gave its approval to PPAs signed between UPPCL and Accord Hydroair (Pikhuwa) Private Limited for the purchase of power from municipal solid waste, (MSW) based projects at Pipalheda village (9 MW) and Phikuwa village (5.5 MW). The PPAs were approved at a tariff of Rs 7.19 per kWh instead of the Rs 7.50 per kWh tariff determined by UPERC for projects commissioned in 2018-19. The commission has directed UPPCL to comply with its regulations for tariff determination in the future.

To streamline the tariff discovery process for renewable energy projects as per the current requirements of the sector and stop unfair project allocation practices, UPERC issued the Captive and Renewable Energy Generating Plants Regulations, 2019. These regulations will be effective from April 1, 2019, through March 31, 2024, unless reviewed or extended by UPERC, and will apply to captive generation, renewable energy and cogeneration plants of 1 MW or above irrespective of their grid connectivity status. These projects have the provision of availability-based tariff and will be under obligation to comply with the directions issued by the state load despatch centres (SLDCs). For bagasse-based and for solar power projects of 5 MW and above capacity, the tariff will be based on competitive bidding. For solar PV projects of capacity less than 5 MW, the tariff will be the weighted average tariff of solar PV projects above 5 MW discovered through competitive bidding in the past fiscal. For MSW, wind and hydro projects commissioned on or after April 1, 2019, UPERC will determine project-specific tariffs.

In December 2018, UPERC released the Forecasting, Scheduling, and Deviation Settlement and Related Matters of Solar and Wind Generation Sources Regulations, 2018 to ensure grid stability in the large-scale integration of solar and wind power. These regulations mandate all solar and wind power projects of 5 MW and above capacity, connected to the intra-state transmission system, to carry out daily forecasting and scheduling of energy generation. These power producers have to provide daily energy generation schedules in 15-minute time blocks to the SLDC and a deviation of more than 15 per cent from the said schedule is liable for penalty.

Despite previous efforts to promote renewable energy uptake, the share of thermal power still remains very high in the state’s energy mix. Thus, the state government has doubled its efforts to have a cleaner and sustainable energy mix. To this end, it has made necessary amendments to its regulations. The increase in the permitted net-metered rooftop solar capacity up to 2 MW and clarity on tariff determination for different power segments are two such progressive regulatory interventions. The state regulator has also encouraged more investments in the state’s renewable energy sector, and has increased developers’ confidence by streamlining approvals and addressing operational challenges. It has also directed UPPCL and NPCL to submit their roadmap for achieving their renewable purchase obligation (RPO) shortfalls early this year.