Gujarat is a power-surplus state, with a significant installed capacity of coal and natural gas power plants. The state recorded no energy deficits, and a peak power deficit of only 0.5 per cent in the period from April 2018 to February 2019. Its state-owned discoms have been ranked A+ as per the Sixth Annual Integrated Rating for State Power Distribution Utilities report  submitted in July 2018 by ICRA Limited and Credit Analysis and Research Limited. Interestingly, of the top five discoms listed in this report, four are in the state of Gujarat.

Gujarat, being an early mover in the renewable energy space, had an installed capacity of 2,876 MW wind power and 472 MW solar power by as early as 2011-12. However, renewable energy capacity addition has slowed down in recent years, with less than 5,000 MW of new renewable capacity added in a span of seven years. A primary reason for this is Gujarat’s high dependence on thermal power for meeting its energy demand, not surprising given that this is an extensively industrialised state. Recent months have also seen increased constraints in the availability of adequate transmission for new renewable energy projects, prompting the relevant state authorities to adopt a slightly conservative approach to the uptake of renewable energy capacity. Even then, Gujarat has succeeded in meeting its renewable purchase obligation (RPO) targets for both solar and non-solar in 2017-18. With wind and solar power contributing to 11.65 per cent of the total power generation in the state in the period from April 2018 to February 2019, Gujarat is likely to meet its RPO targets in 2018-19 as well. 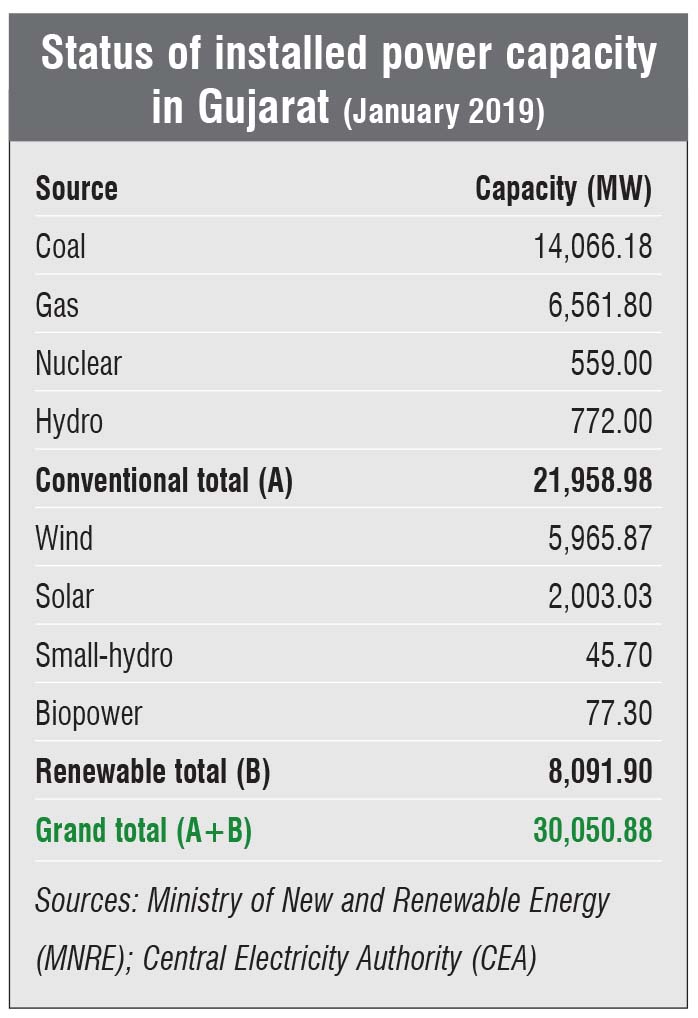 Land acquisition has always been one of the most critical issues in setting up renewable energy projects. With the increasing unavailability of resource-rich sites and the rising cost of land, the gravity of the land acquisition issue has deepened, causing delays in project commissioning. The recent land allocation issues in Gujarat are the latest examples of this problem, resulting in the stranding of thousands of megawatts of wind power capacity. In the Solar Energy Corporation of India’s (SECI) Tranche III and Tranche IV wind power auctions of interstate transmission system (ISTS)-connected projects, most wind power developers had opted to set up their projects in the wind-rich sites of Gujarat. However, the relevant agencies in Gujarat insist that the centre should have consulted the state government before holding these auctions. These state agencies object to the scattered development of projects and transmission lines. They also have concerns about the supply of power to any part of the country through the ISTS network. They prefer that the power projects located in Gujarat should supply power to the state alone.

The Gujarat authorities received a lot of criticism recently for their refusal to transfer land to wind power developers that had won projects in any bid other than those conducted by the state itself. Many projects are stranded at the moment because the developers have already placed equipment orders, signed construction contracts, and are just waiting to receive land acquisition approvals. Some developers have even tried buying expensive private lands, leading them to take a hit on their margins. The central government has intervened on behalf of the developers and directed the Gujarat government to resolve the matter. In March 2019, the revenue department of the state directed district collectors to help such projects via an order that says that the winning bidders of state and central government auctions with letters from the Gujarat Energy Development Agency (GEDA) should be allotted land.

To resolve land-related issues so as to expedite renewable energy project development, the Gujarat government released its land policy for these projects in January 2019. This is the first significant move by any state to address the increasing land- and transmission-related constraints facing the development of solar and wind projects. This land policy mandates that all future solar, wind, and solar-wind hybrid projects will have to be developed in especially earmarked parks. A total area that can accommodate 30 GW of renewable energy will be sanctioned for the parks, with each park having a capacity of a minimum 1 GW;  10 GW of the total capacity will be kept aside for PSUs. The major objective of this land policy is to ensure streamlined and convenient power evacuation without having to deal with the criss-crossing of transmission lines across the state due to scattered project development. While this land policy will ensure the planned development of renewable energy projects in the future, it does not provide any clarity on the fate of the wind power projects that are currently stranded. 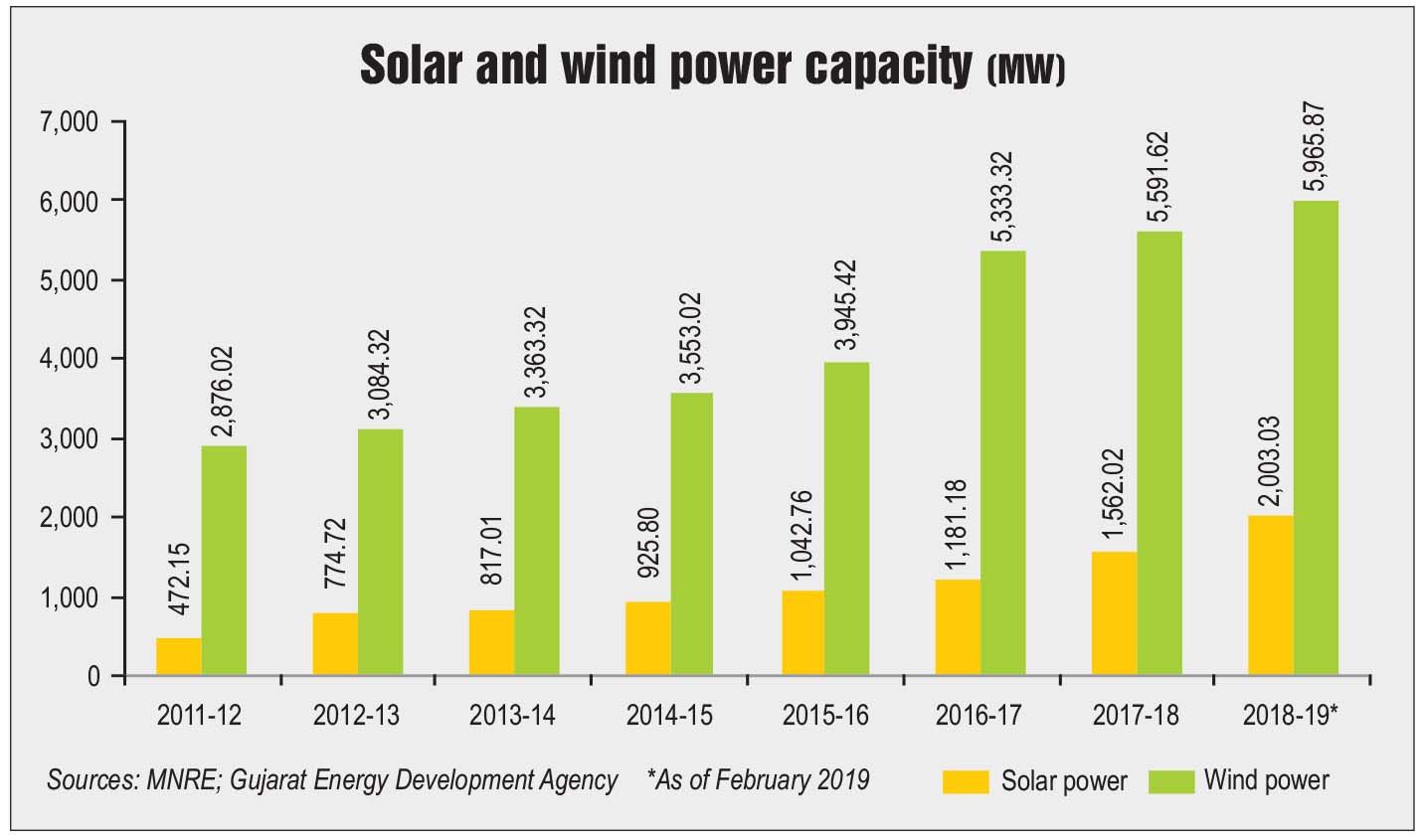 Solar policy for small-scale projects: To facilitate the development of Gujarat’s small-scale distributed solar photovoltaic (PV) segment, in March 2019, the Gujarat government  approved a policy targeting solar PV projects of sizes ranging between 0.5 MW and 4 MW. The policy, which will be in force for five years, aims to promote solar PV uptake in scattered pockets of uncultivable land in a distributed manner. The small size of these projects will increase opportunities for small-scale entrepreneurs who are not able to bid in large capacity solar auctions. Under this policy, any individual or company can set up solar projects for selling power to discoms to meet their RPO compliance under a 25-year power purchase agreement (PPA). The applicable tariff for these PPAs will be the average tariff discovered  in the past six Gujarat Urja Vikas Nigam Limited (GUVNL) auctions plus Re 0.20 per kWh.

Forecasting, scheduling and deviation settlement regulations: In January 2019, the Gujarat Electricity Regulatory Commission (GERC) announced new regulations for the forecasting, scheduling and deviation settlement of solar and wind power plants. While these regulations are effective from the date of the notification, the deviation charges will be effective from August 1, 2019. The regulations direct a grid operator to ensure grid stability by utilising flexible conventional power plants and transmission capacity to integrate solar and wind power into the grid. All wind and solar power generators connected to the state grid will undertake forecasting and scheduling, either by themselves or through a qualified agency. The forecasting and scheduling code will provide a methodology for day-ahead or intra-day scheduling. For deviation settlement, developers connected to the state grid will be paid by buyers as per the actual generation at the tariff agreed to in the PPA or in the wheeling agreement. In the case of power sale outside the state, the buyer will also have to pay the deviation charges as per the Central Electricity Regulatory Commission’s (CERC) Deviation Settlement Mechanism and Forecasting Regulations, 2014.

Wind-solar hybrid power policy: The Gujarat government announced its Wind-Solar Hybrid Power Policy in June 2018. According to the policy, developers can set up wind power plants on land that is currently in use for solar power generation, and vice versa. These projects, classified as Type A projects, include existing or under-construction projects and can utilise existing transmission lines for hybrid projects. Type B projects include new wind-solar hybrid projects that have not yet been registered with GEDA. Such developers will have to set up dedicated lines for power evacuation up to the receiving end station of the Gujarat Energy Transmission Corporation (GETCO) at their own cost. For hybrid captive plants, the policy provides total exemption from cross-subsidy surcharge and additional surcharge, and 50 per cent relief in wheeling charges and distribution losses. The benefits and rebates will be applicable for a period of 25 years or for the life cycle of the project.

Suryashakti Kisan Yojana (SKY): The Gujarat government launched the SKY scheme for farmers in July 2018. The objectives of this scheme are to address the energy requirements of farmers without putting financial stress on discoms and also to empower farmers. Under the scheme, farmers with an existing electricity connection will be given solar panels depending on their load requirements. The farmers can generate solar power for their own consumption and sell the surplus to discoms. To make solar panels affordable for farmers, the state and central governments will provide a 60 per cent subsidy on the cost of the project. Of the remaining 40 per cent, farmers will be required to bear 5 per cent of the cost, while 35 per cent will be provided to them as a loan with low interest rates of 4.5-6 per cent. The scheme will be in operation for 25 years. For the first seven years of the scheme, farmers will receive Rs 7 per unit of energy sold to discoms. For the next 18 years, they will get a rate of Rs 3.50 per unit. The project aims to benefit about 2.6 million farmers with power connections.

Under the SKY scheme, the Gujarat government is planning to implement a 175 MW pilot solar project on agricultural land. Under this pilot, solar projects will be set up for powering around 137 agricultural feeders, covering 33 districts in the state. This translates into electrifying 12,400 agricultural connections with an aggregate load of 142,000 HP. The cost of the pilot project is estimated to be Rs 9 billion. Its implementation will be supported by GERC. 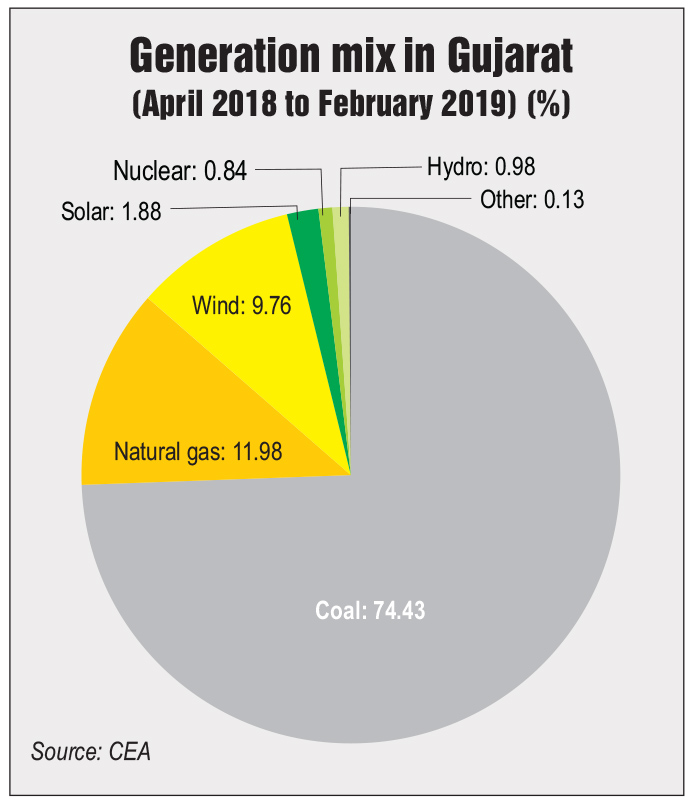 In March 2019, GUVNL issued a tender for procuring power from 1 GW of grid-connected wind power projects that are to be developed in the state. The successful bidders will be selected through a competitive bidding process, and GUVNL will enter into a PPA with the successful bidders for 25 years. The minimum bid capacity is 25 MW and the maximum bid capacity is 300 MW. GUVNL may also sign PPAs of up to 100 MW with PSUs that participate in the tender process but do not win. However, these PSUs should be willing to execute the PPA at the lowest quoted tariff and the lower limit of 25 MW would not apply to them. The financial bid and the reverse auction will take place in April 2019. The previous wind auction of GUVNL, which was launched in February 2018, was cancelled in July 2018 due to developers’ concerns. Prior to that, GUVNL’s 500 MW wind auction in December 2017 witnessed the lowest ever wind tariff of Rs 2.43 per kWh.

Being one of the leaders in the renewable energy space, Gujarat has taken a lead in addressing some of the most critical issues in renewable energy development. It is one of the few states that is concentrating on not just capacity addition but also transmission and land issues. Its land allocation policy, although strict, is aimed at the sustainable development of renewable energy without destabilising the grid. In addition, Gujarat has released the forecasting, scheduling and deviation settlement norms for better grid integration.

To sum up, the  Gujarat government is on the right track and is focusing on the overall growth of the sector. Its recent solar policy targeted at small-scale solar plants is a step in that direction.