According to B.B. Mehta, chief engineer, state load despatch centre (SLDC), Gujarat Energy Transmission Corporation (GETCO), network planning is one of the critical components of grid strengthening and expansion. This is done by taking into account the existing operational conditions (generation, transmission and distribution), the expected improvements and the future expansion plans. It also includes the identification of new transmission network elements and upgradation of existing infrastructure in order to provide quality power supply to consumers. Meanwhile, it is important to understand the future system requirements to provide adequate transmission capacity during outage contingencies in any network element. This will help determine the investment requirement and the timeline for network strengthening. The primary purpose of strengthening the core grid network is to optimally utilise the existing infrastructure, reduce transmission losses and ensure the seamless integration of renewable power.

The key issues pertain to the transmission network and grid operations as per S.B. Chandrashekharaiah, executive engineer, supervisory control and data acquisition (SCADA), SLDC, Karnataka Power Transmission Corporation Limited (KPTCL). The expansion of transmission infrastructure needs to be undertaken in parallel with renewable capacity addition to ensure smooth integration. For this, it is important to understand the growth pattern and determine a date of completion of mega renewable energy projects. The key factors that need to be considered in transmission network planning are load demand, variations in renewable energy injection, path of load flow, reactive power and voltage issues along the transmission line.

Grid operations pertain to the management of variable renewable energy generation. For instance, to manage the unpredictable wind generation pattern, or the effect of cloud packets on solar generation, it is important to determine the ramp-up and ramp-down rates. Therefore, fast-governable generation commensurate with the additional renewable energy capacity is a necessity for effective grid management.

The objective of transmission planning is to enable the smooth integration of the upcoming renewable energy into the grid network. To this end, it is critical to identify the type, location and phase of the new transmission system. According to Mehta, these can be determined through power system studies that analyse the load forecast, capacity addition programmes of the state, central and private sectors, and expected import from and export to the interstate transmission system (ISTS) network. The adequacy criteria for transmission networks have to be determined station-wise. The key feature of a new transmission system is its scalability. This system is effective in the long term, and also open for development in stages for optimal utilisation.

The technical requirements of transmission system planning pertain to redundancy and contingency criteria, radial feeders, load growth and nature of load, reactive power management, power quality, the downstream network (which is dependent on geographical and socio-economic conditions), load diversity and seasonal variations in the demand pattern for renewable energy integration.

Apart from this, GETCO will undertake a system study based on the anticipated renewable capacity addition and other network topology parameters during the given time frame. According to Mehta, grid strengthening and expansion are primarily based on the operational feedback and real-time constraints in grid operation. The system study is necessary to determine the best location, and the optimal capacity of the proposed substations and new transmission lines. It is also important to prioritise the investment requirement. In addition, the study helps determine the optimal size and locations of capacitors and rectors to ensure proper voltage control and minimise transmission losses. With the study, transmission network congestion can be avoided.

Telangana has been at the forefront of promoting the distributed renewable energy model in the country. When the land acquired for setting up a 500 MW solar park in Mahaboobnagar district was cancelled by the high court, the state set up the capacity through the distributed solar generation model. According to T. Jagath Reddy, director, transmission, Telangana State Transmission Corporation (TSTransco), the high solar capacity growth in the state has largely been achieved on the back of the distributed generation model. The benefits of such a model include local generation, and the absorption of solar power by agricultural and other loads. Meanwhile, it helps save nearly Rs 400 million per year with injection at the 33 kV level, and about Rs 5 billion in system strengthening investments. Also, since developers have already declared their choice of substation for solar power injection, it helps plan the transmission system better and avoid any delays in commissioning. It is estimated that distributed generation helps save around 122 MUs of energy annually and reduces transmission losses by 1.64 per cent.

According to Chandrashekharaiah, under Phase I of the GEC intra-state transmission scheme, five substations have been planned to be implemented at various voltage levels. Along with this, 342 ckt. km of transmission lines will be laid across all voltages. Built at a cost of Rs 12 billion, these transmission lines will facilitate the evacuation of an additional 850 MW of wind, 150 MW of solar and 205 MW of mini- hydro power in the state. In Phase II, five substations will be added with 816 ckt. km of transmission lines. This will help evacuate the existing 200 MW of renewable energy along with 714 MW of wind and 140 MW of solar power. Phase II is expected to be built at around Rs 14.5 billion.

The GEC project as well as initiatives by renewable-rich states such as Gujarat, Karnataka and Telangana will enable greater evacuation of power from renewable energy projects. Meanwhile, a robust grid network will be more resilient towards the variable and intermittent nature of renewable power. For the smooth integration of the upcoming renewable energy capacity, the plans of the state and central governments must be in sync with the pace of capacity addition to avoid stranded capacity or power curtailment. 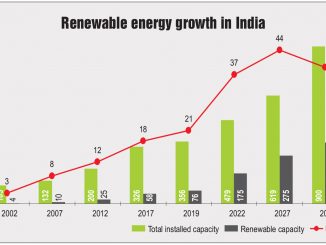 September 21, 2019
While renewable energy capacity is growing at a fast pace, transmission-related issues have been hampering progress in recent times. There is a mismat...
More