The small hilly state of Uttarakhand was formed just two decades back on the premise that abundant hydropower and increasing tourism would make the state profitable. Nearly two decades later, it is safe to say that the state has been largely successful in leveraging this potential. Uttarakhand records one of the largest tourist numbers in India in a year. While this brings revenue for the state, it also increases the state’s power demand. Uttarakhand has a high hydro potential, estimated at 20 GW, which complements the increasing power demand in the state. The power demand is higher in the summer months, which coincides with a greater volume of water in the rivers due to melting of snow in the upper reaches of the mountains.

Power from large hydropower projects contributes to roughly 87 per cent of the total power generation in the state, while gas, small hydro and solar account for the remaining share in the generation mix. Due to its large hydropower generation, Uttarakhand has some of the lowest grid tariffs in the country. The commercial grid tariff is only Rs 4.70 per kWh and the LT and HT industrial grid tariffs are Rs 4.08 and Rs 4.03 per kWh respectively. Such low tariffs attract a large number of commercial and industrial consumers to the state.

The state’s total installed power capacity stood at 3.5 GW as of November 2018, of which roughly 1.8 GW comes from hydropower. With 100 per cent electrification achieved in all districts and villages (as per Saubhagya statistics), and power cuts reduced to a minimum, the overall power supply situation in Uttarakhand has improved. The state reported only 0.8 per cent deficit in net energy supplied and zero deficit in peak power supplied during April-December 2018.

The state discom, Uttarakhand Power Corporation Limited (UPCL), has very low levels of debt, unlike the discoms of its neighbouring state, Uttar Pradesh. UPCL secured A+ rating as per the Sixth Annual Integrated Rating for State Power Distribution Utilities report submitted by ICRA Limited and Credit Analysis and Research Limited in July 2018. Interestingly, of the top five discoms in this report, UPCL is the only discom that is not in Gujarat.

Despite these achievements, the discom is struggling with very high aggregate technical and commercial losses and low revenue realisation. Cheap hydropower and large industrial base are its only advantages. However, with the migration of commercial and industrial consumers to open access or captive plants to procure power, these will also become ineffectual.

Uttarakhand has utilised less than 10 per cent of its available hydropower potential so far. The state still has vast reserves of untapped hydropower to meet its energy demand in the future. However, hydropower has been coming under fire from environmentalists all over the world due to rising concerns over the sustainability of the river ecosystem, and its impact on the lives of people living in the area.

For instance, the flood disaster of June 2013 in Uttarakhand, which is presumed to have taken the lives of around 5,700 people as per state government statistics, has raised questions about the ill-effects of large hydropower projects in ecologically sensitive areas. Many environmentalists are not only blaming the ill-planned construction of roads and hotels, but also the large number of hydropower projects in the state for the flood disaster. Experts believe that the tunnelling work undertaken for these projects created an ecological imbalance in the state and changed the flow of river water, which becomes uncontrollable during heavy rains. This led to a higher number of landslides and more flooding.

A number of hydroelectric projects constructed on the Ganga river suffered serious damage in these floods, with losses for the state hydropower development corporation estimated at Rs 770 million. Expectedly, the redevelopment work has been slow with the authorities taking a cautious stand towards hydropower development. The long gestation period and extensive rehabilitation work required are also making the implementation of large hydropower projects challenging.

With large hydropower projects witnessing a slowdown in Uttarakhand, the energy security of the state seems to be compromised. Hence, the state authorities need to utilise alternative energy resources to fulfil the power demand. Uttarakhand has negligible fossil fuel reserves, and the transportation cost of these fuels is high especially in the remote hilly regions of the state. In addition, supplying power to the primitive and rural areas in the harsh mountainous terrain of Uttarakhand through an electric grid is challenging. Scattered households, poor load characteristics and adverse weather conditions also make grid connectivity an economically unviable option.

In a state like Uttarakhand, renewable energy sources like solar, biomass and small hydro, which do not require huge capital investments or centralised systems, are viable options for power generation. These power plants can be set up in a distributed manner with very less operating expenses to make the remote regions of the state self-sufficient in terms of power generation. The cost of delivered energy from solar power is low and affordable for the people living in these regions. The state authorities have also realised the benefits of solar power and other renewable energy sources and are promoting them on a large scale through various schemes and policy measures.

A late mover in the solar power segment, Uttarakhand’s total installed solar power capacity stood at only 5 MW at the end of 2014-15. It has increased significantly in recent years to stand at 303.18 MW as of November 2018, as per the Ministry of New and Renewable Energy (MNRE). Solar power accounts for 9 per cent of the total installed power capacity. The rooftop solar capacity has increased from 9 MW in October 2016 to 32 MW in October 2018, as per Bridge to India’s estimates. Like in the rest of the country, almost the entire rooftop solar capacity in Uttarakhand is concentrated in the commercial and industrial segments. 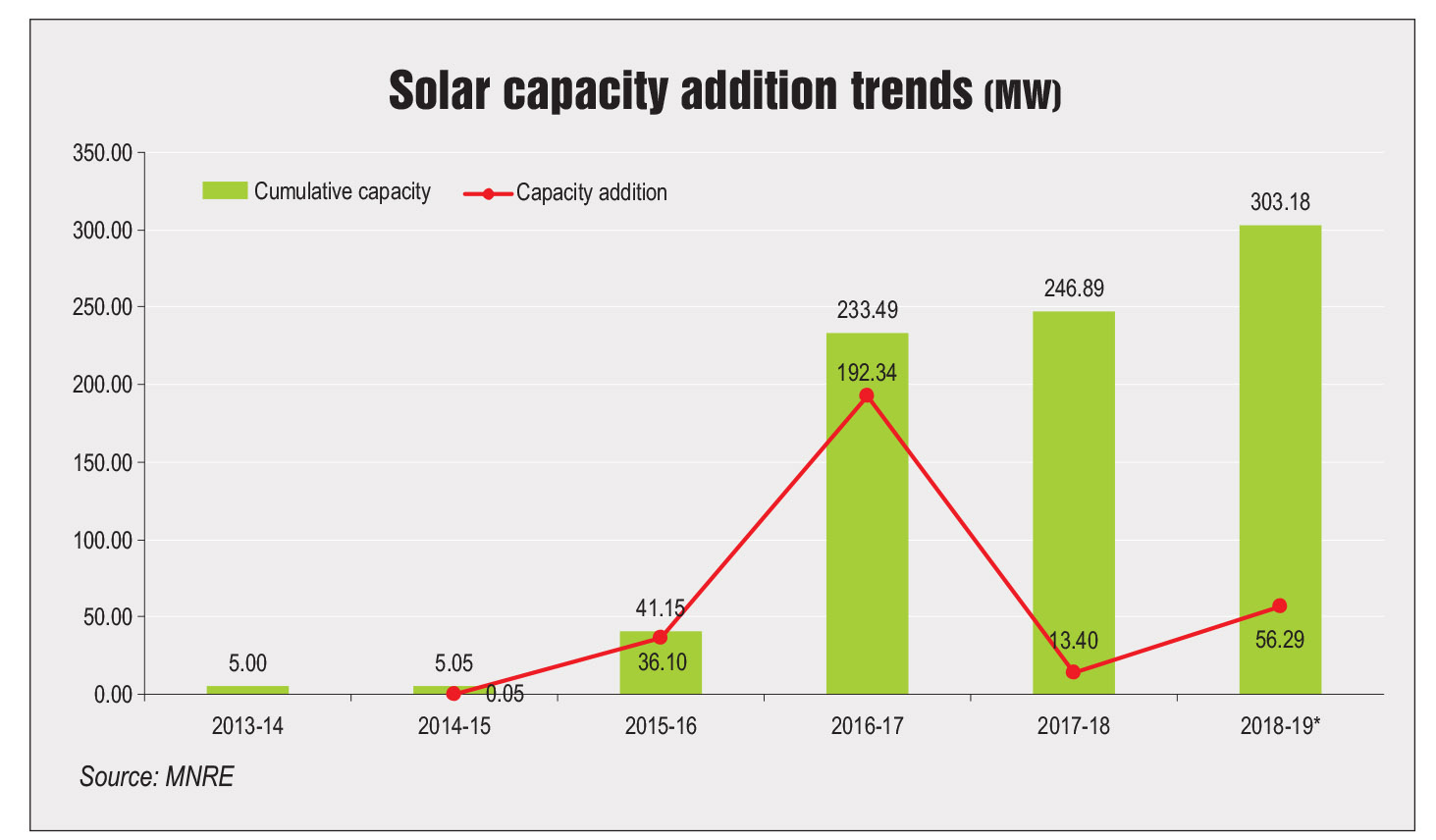 The state’s solar policy was released in 2013, and has seen minor amendments since then, in 2015 and 2018. Under the policy, the minimum and maximum capacity that can be allocated to each developer is 100 kW and 50 MW respectively. The state permits the use of net meters for rooftop solar projects provided the project capacity is 300 W to 100 kW (for projects with battery backup) and up to 500 kW (for projects without battery backup).

In October 2017, the Uttarakhand government along with a charitable funding agency, Swan Cultural Center, launched the Solar Briefcase scheme in Kedarnath. The scheme, part of the state’s initiative to provide electricity to remote areas, was aimed at electrifying nearly 60 unelectrified villages in Uttarakhand through solar-powered systems.

The state’s policy initiatives have attracted a high number of developers commissioning not only smaller rooftop projects but also projects of larger sizes. For instance, Abengoa, a Spanish renewable energy company, commissioned a 5 MW solar project for Enerparc Energy in Roorkee in May 2017. Meanwhile, EDEN, a joint venture between EREN Renewable Energy and EDF Energies Nouvelles, developed and commissioned two solar power projects with a combined capacity of 36 MW in Uttarakhand in November 2017. EDEN has a 49 per cent stake in these projects. India Power Green Utility Private Limited also co-developed and implemented a 36 MW solar power project in Uttarakhand in 2017. 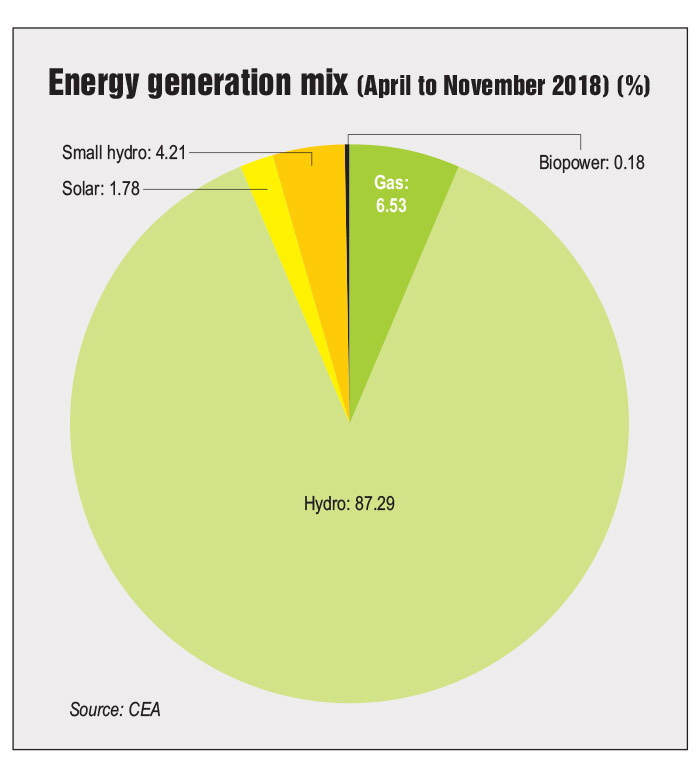 Uttarakhand has a huge forest cover, of which roughly 16.36 per cent comprises pine trees. Pine needles can be used in biopower generation, apart from other biomass resources like agricultural crop residues. Uttarakhand has only 130 MW of installed biopower projects as of November 2018. Realising the huge potential of biomass-based power, the state government released the Policy for Power Generation from Pirul (Pine Leaves) and Other Biomass in August 2018. As per the policy, the state has a potential to produce 150 MW of power annually from the available biomass resources.

Despite having a large number of streams and small rivers, Uttarakhand has only 214.32 MW of installed small-hydro power projects as of November 2018. This is primarily due to persistent challenges facing the segment. These include delays and difficulties in obtaining permissions from multiple government agencies and reluctance of the private sector to invest in the segment due to the large capex, low tariffs and modest returns involved. Going forward, Uttarakhand needs to come up with investor-friendly measures, and government agencies should provide financial and technical support to scale up development in the small-hydro power segment.

In October 2018, the Uttarakhand government approved the electric vehicle (EV) policy to promote the use and manufacturing of EVs in the state. To promote manufacturing, credit in the range of Rs 100 million to Rs 500 million would be made available to micro, small and medium enterprises.

The UERC (Deviation Settlement Mechanism and Related Matters) Regulations, 2017 came into effect in April 2018. The primary objective of such regulations remains the same in all states: mandating the forecasting of power generation and penalising generators for any deviations from the promised schedules. The implementation of these regulations is expected to reduce the unscheduled interchange of power or deviation from schedule by open access consumers or distribution licensees or intra-state generators, which will help in maintaining the grid balance.

Apart from these state regulations, Uttarakhand has been categorised as a special category state under Phase III of the off-grid and decentralised solar applications programme of the MNRE. These special category states are provided a central financial assistance (CFA) of 90 per cent of the benchmark cost for the installation of solar street lights. Under the same programme, a CFA of 90 per cent of the benchmark cost is provided for the installation of individual solar power plants of up to 25 kW, in order to provide power to schools, hospitals, hostels, panchayats and other public service institutions in these states.

In another development, in July 2018, the MNRE asked all the state governments to exempt small-hydro power project developers from cess and taxes for six years from the commencement of commercial operations. This was done to avoid contradictory policies between the central and the state governments. This landmark decision will help drive uptake of small-hydro projects in the private sector. 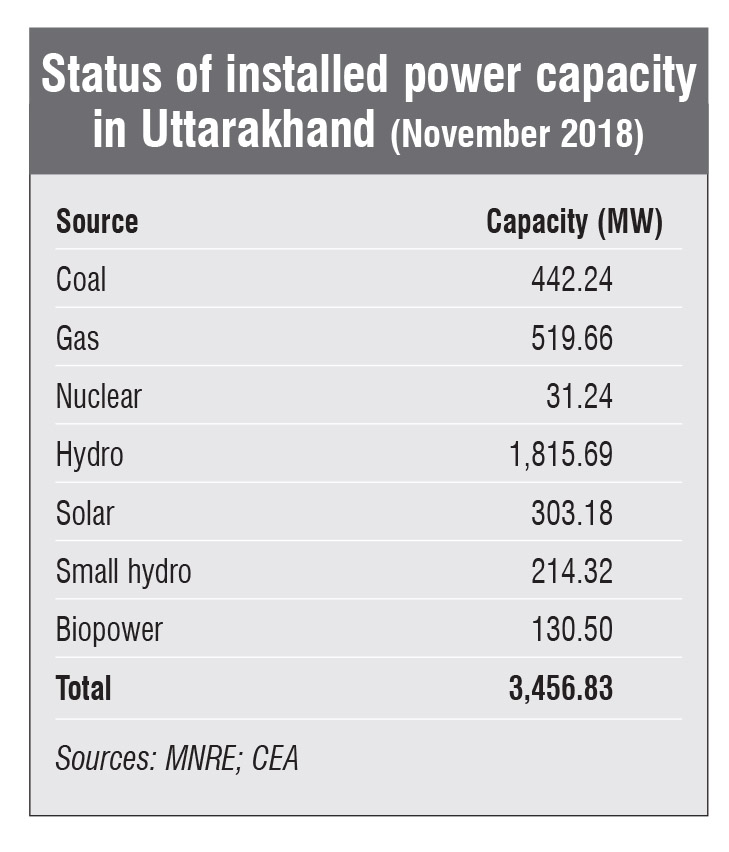 In January 2019, the Uttarakhand Irrigation Department (UID) invited request for proposal bids (RfP) for the development of 40.84 MW of grid-connected solar photovoltaic power projects in the state. The identified projects will be constructed at the periphery of two dams – a 27.34 MW solar project at Haripura and a 13.5 MW solar project at Tumariya. Both the dams are located in the Udham Singh Nagar district of Uttarakhand. The projects will be developed on a build-operate-own-transfer (BOOT) basis and the last date for the submission of bids was February 15, 2019. The work is expected to be completed in 12 months. The UID will sign a power purchase agreement with the successful bidder for a period of 25 years and will also provide the required land for the installation of the plant.

In the same month, Uttarakhand Jal Vidyut Nigam Limited invited request for quotation-cum-RfP bids for a 14 MW small-hydro power project in Kamtoli, a 15 MW small-hydro project in Muwani and an 11.1 MW small-hydro project in Seraghat. The scope of work includes the design and engineering, construction, financing, land lease agreement and operations and maintenance of the projects on a BOOT basis. The survey, investigations and detailed project reports for the projects have been completed. Also, special purpose vehicles have been constituted for the same. The last date for bid submission is February 21, 2019.

To avoid RPO non-compliance, the state authorities are undertaking rapid solar capacity additions, presenting an attractive opportunity for interested developers. Since grid tariffs are low and open access charges are high, much of the opportunity lies in the captive project development and power sale arrangements with discom. The solar power capacity has increased by 60 times from 2014-15 to 2018-19, and will continue to grow going forward.