Around 500 GW of solar panels have been installed worldwide. In India itself, the installed solar capacity has crossed 25 GW and the country is expected to add over 11 GW over the next few years. However, solar panels are beneficial for the environment only during their operational period. The disposal of panels presents a major challenge once their useful life is over.

The Photovoltaic Power Systems Programme of the International Energy Agency (IEA-PVPS), in its 2016 study on end-of-life management of solar PV panels, estimated the cumulative global PV panel waste volume to reach 60-78 million tonnes by 2050, with an annual waste generation of 5.5-6 million tonnes in the 2050s. The actual waste volumes are expected to be much larger mainly because the Chinese and Indian markets have grown faster than expected by the IEA-PVPS study. The rapid capacity additions globally have not been accompanied by concerns about the end-of-life management of solar panels. In addition, a proper regulatory framework for the disposal and recycling of solar panels is still not in place.

In October 2018, speaking at the 2nd Global RE-Invest Meet &  Expo in India, Masayoshi Son, chief executive officer, SoftBank, indirectly raised the issue of waste disposal of solar panels. He offered to supply free electricity to the International Solar Alliance (ISA) member countries including India, once its contracts to supply power in these countries expire. The statement started discussions and debates on social media. One question raised during the discussion was, who would bear the cost of handling end-of-life solar modules. The common conclusion was that the cost benefit of receiving free energy from these plants would be negligible in comparison to the high cost of managing the modules. Therefore, the positive proposition of Masayoshi Son was received with a pinch of salt.

Not so clean energy

The issue with solar modules is that they are made of hazardous materials such as lead compounds, polymers and cadmium compounds. If the modules are disposed of in an uncontrolled way, these hazardous materials can leach into the soil, causing environmental and health damage. For instance, it can lead to the loss of biodiversity, and decreased growth and reproductive rates in plants and animals. There are several other health hazards that make safe disposal of waste solar panels necessary.

The disposal of solar module waste is a bigger problem in countries like India, where there is no established standard for recycling of solar modules. Moreover, there is no regulation or policy that assigns responsibility or lays down a mechanism for solar PV waste management. Globally, module waste is typically sent to laminated glass and metal recycling facilities, which recover 70-80 per cent of the material by weight. However, in India, there are no such facilities that can separate glass, major metals and polymer fractions from c-Si module waste. In the case of thin-film modules, developers have an option to channel the module waste to dedicated recycling facilities located in various countries through a contract with the module manufacturer. However, thin-film modules account for only 7 per cent of the Indian module market, which is dominated by c-Si modules.

With advancements in module manufacturing technologies, the replacement of potentially hazardous raw materials with non-hazardous materials is becoming more viable. For instance, lead, an environmentally hazardous material, is used in solders as standard interconnection technology for solar cells and modules. Now, many module manufacturing companies have come up with lead-free solders.

There are other best practices as well. “The use of fluoro backsheets,” says a BRIDGE TO INDIA spokesperson, “poses serious environmental threats, if not treated and disposed of appropriately. Today, attractive non-fluoro backsheets are being offered in the market.” 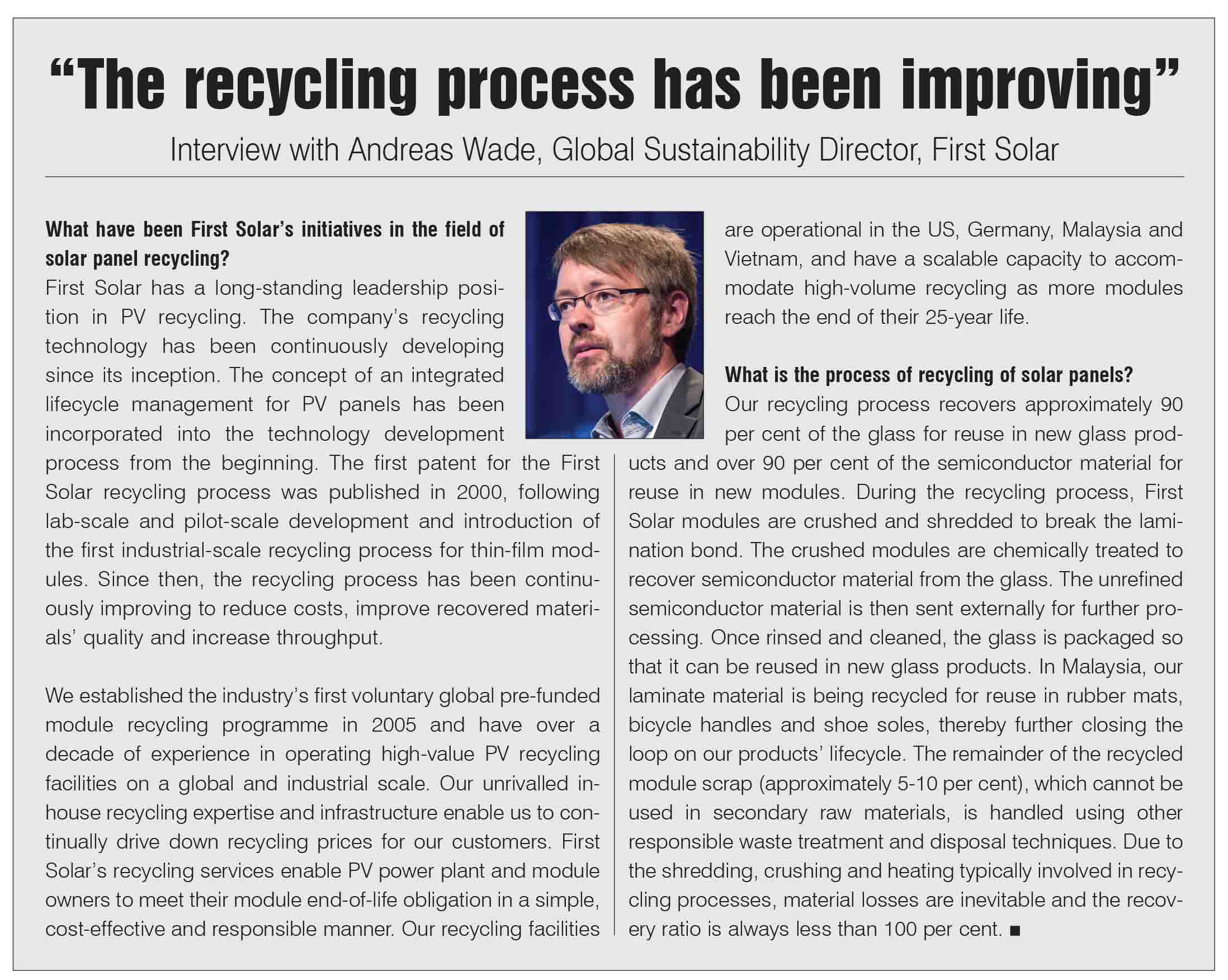 There are several module makers that manufacture modules keeping the end-of-life in mind. US-based First Solar is one such company. The company is proactively investing in recycling technology and implementing a cost reduction roadmap to bring down recycling prices. In 2015, the company launched its third-generation recycling technology, which achieves better glass and semiconductor purity and requires 30 per cent less capital, chemicals, waste and labour. The company uses a continuous flow process, which improves its recycling efficiency and throughput, thereby increasing the daily recycling capacity from 30 tonnes to 150 tonnes. The company also aims to set up modular recycling facilities for smaller markets to enable in-country recycling and reduce transportation costs.

In the off-grid segment, GOGLA, a global association for the off-grid solar energy industry, has started developing feasible solutions for PV waste disposal.

The recycling of solar panels is a good solution for reducing the potential risks of hazardous waste. However, the recycling market faces various issues and challenges. Currently, large-scale recycling facilities are only available in European countries. This means that solar panels across the globe need to be transported to these facilities. This is a cumbersome process and hence expensive.

Apart from logistics constraints, there is a lack of investments in this sector in India. This can be attributed to two major factors. One, there is no specific regulation for PV waste disposal in India. The only reference to recycling is found in the Ministry of New and Renewable Energy’s guidelines for setting up grid-connected solar power plants. The guidelines place the onus of disposal of PV waste on the developers. It states, “The developers will ensure that all solar PV modules collected from their plant after their end-of-life are disposed of in accordance with the E-waste (Management and Handling) Rules.” Notably, the e-waste rules do not cover PV waste.

There are two ways in which waste solar panels are managed and both come with a few issues. One, the old modules can be recycled to make new ones, but there is no evidence to prove that the recycled modules retain their efficiency. The second solution is to extract precious metals like copper and silver for resale. However, the extraction of precious metals from the modules is capital intensive and hence not feasible for start-ups. In addition, there are new PV technologies being developed that avoid the use of precious metals as they are toxic. If these technologies become mainstream, waste disposal companies will have no incentive to recycle the panels. 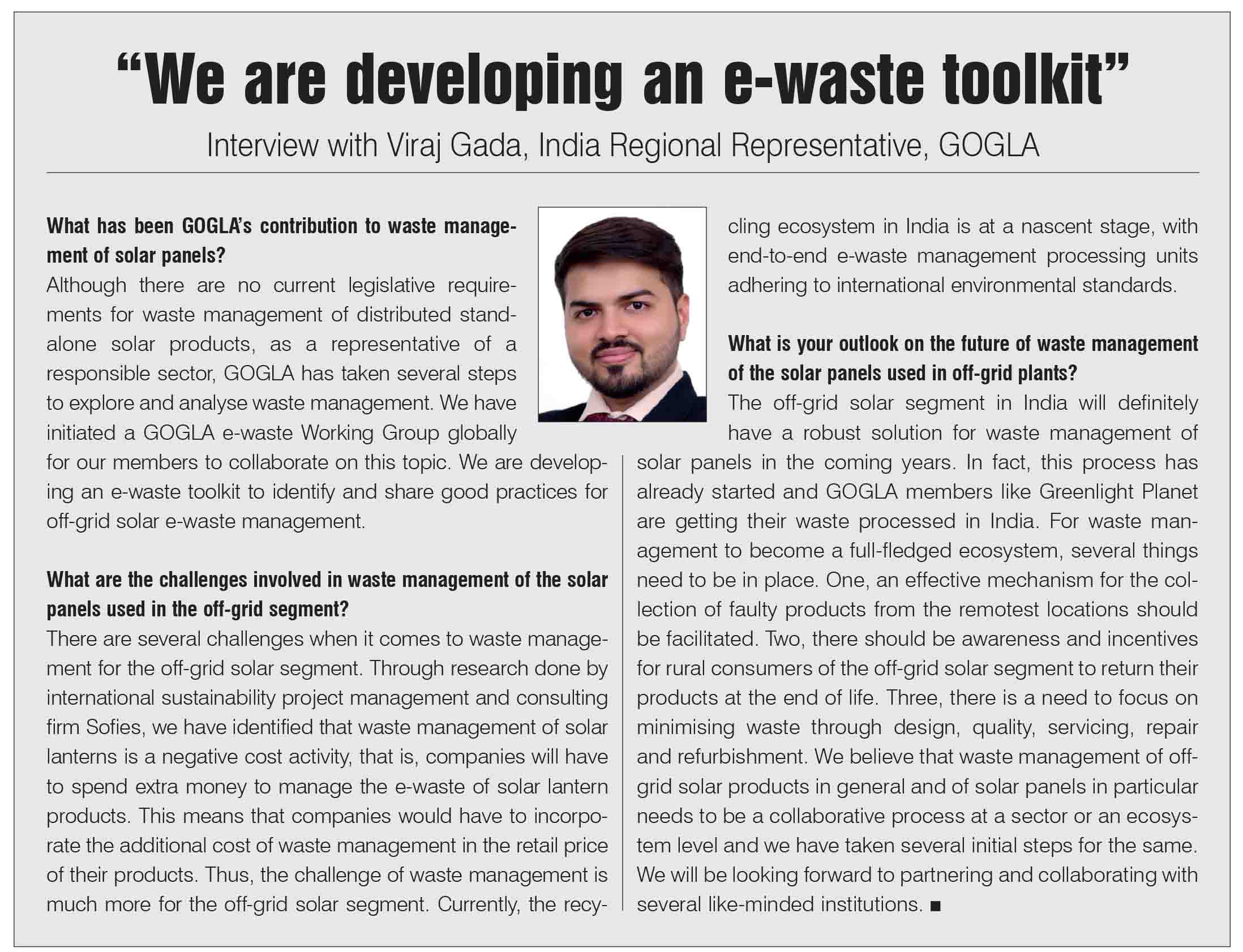 As a first step, India should include PV waste in the E-Waste Management Rules. This will enable investments and create more awareness. In addition, implementing a quality standard for the raw materials used in module manufacturing will go a long way in minimising the quantum of potentially hazardous PV waste in the future.

The PV waste quantum is expected to grow exponentially in the near future. “As per our estimates,” says a BRIDGE TO INDIA spokesperson, “annual module waste generation is expected to grow from around 40,000 tonnes at present to around 1.8 million tonnes per annum by 2050.” India’s annual e-waste generation volume at present is 2 million tonnes. If the government follows the example of leading European countries and proactively adopts a waste recycling approach for PV modules, a thriving waste management and recycling market can be created in the next few years.