While the private sector has played a significant role in promoting renewable energy in India, the public sector too is emerging as a growth driver with more public sector units (PSUs) looking at alternative sources of power generation to become diversified energy companies. One such PSU is NLC India Limited (NLCIL). The company, which has a long-standing presence in coal- and lignite-based generation, has in recent years developed significant renewable capacity.

NLCIL was formerly called Neyveli Lignite Corporation Limited, which was established as a lignite mining and lignite-based power generation company under the administrative control of the Ministry of Coal. The company, headquartered in Tamil Nadu, serves as an important source of generation for Tamil Nadu, Andhra Pradesh, Karnataka, Kerala, Telangana, Rajasthan, and the Union Territory of Puducherry. Today, the company’s installed capacity has crossed 4.8 GW.

NLCIL has set an ambitious capacity addition target to cross 21 GW by 2025 in the long term and about 11.3 GW in the next three years. To this end, several power plants, both coal and lignite based, are planned to be set up in states other than Tamil Nadu, such as Uttar Pradesh, Odisha and Andhra Pradesh. Renewables capacity is expected to form a major part of the company’s growth plans with around 3.5 GW targeted in the next few years. NLCIL is also eyeing acquisitions of almost 3 GW to grow its installed base. On the mining front, the company is looking at increasing its lignite mining capacity besides foraying into coal-based mining. Overall, a capex of Rs 1,290 billion is expected to be incurred by the company by 2025.

Its pithead lignite power stations include TPS-I (600 MW), TPS-II (1,470 MW), TPS-I Expansion (420 MW) and TPS-II Expansion (500 MW) in Tamil Nadu as well as the Barsingar TPS (250 MW) in Rajasthan. Of these, the TPS-II Expansion project comprises two 250 MW capacity units based on eco-friendly circulating fluidised bed combustion boiler (CFBC) technology. Despite operating some of the oldest plants in India, the company has managed to deliver a reasonably good operational performance by keeping the plant load factor (PLF) high.

Its renewables’ capacity comprises 51 MW of wind power and 541 MW of solar power. The entire wind capacity comes from a 51 MW wind power plant in Thirunelveli district, Tamil Nadu. The company’s solar capacity includes various plants in Tamil Nadu, of which almost 300 MW was commissioned this year (this is part of the 500 MW capacity that was tendered in December 2016). The company also owns a 1 MW rooftop solar photovoltaic (PV) project in Neyveli township, Tamil Nadu. In January 2018, it commissioned another 130 MW solar power plant in Neyveli, developed in two blocks of 65 MW each. 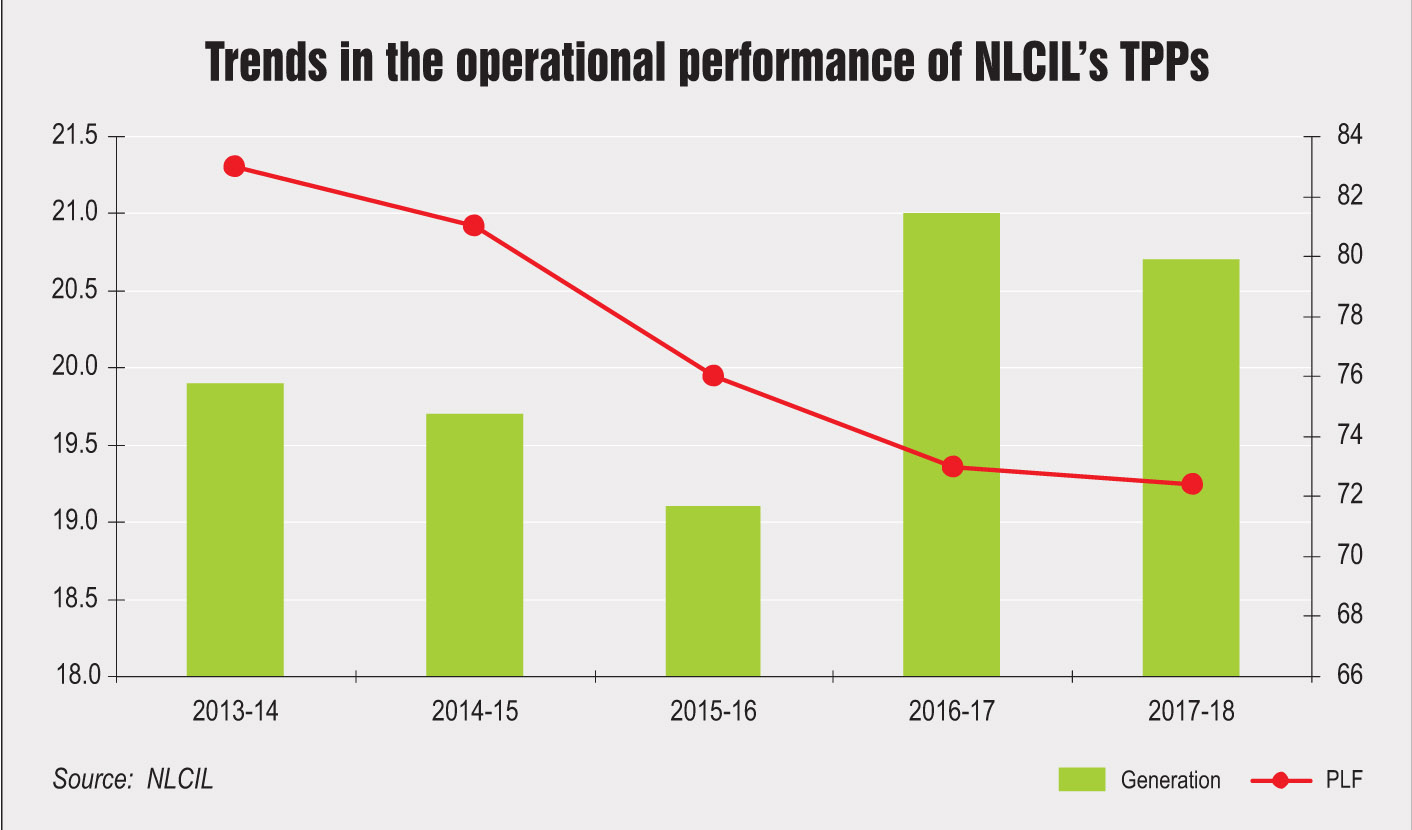 NCLIL registered a total income of Rs 90.83 billion in 2017-18 (Rs 80.59 billion from the power sector, Rs 6.51 billion from the mining sector and Rs 3.73 million from others), as against Rs 93.27 billion in 2016-17, marking a year-on-year decline of nearly 2.57 per cent. The decline in income from operations was mainly due to unprecedented surrender of power impacting the company’s revenue generation adversely and also on account of passing on a benefit of around Rs 7.5 billion to the beneficiary discoms.

Meanwhile, NCLIL recorded a net profit of Rs 18.49 billion in 2017-18 as against a profit of Rs 23.69 billion in 2016-17. The utility also incurred a capital expenditure of Rs 8.27 billion and Rs 1.28 billion on existing power plants in 2017-18 and 2016-17 respectively. The huge increase in capital expenditure is attributed to the 1,000 MW Neyveli New thermal power project under construction and the 500 MW solar power projects tendered in Tamil Nadu in December 2016.

NCLIL has a slew of power projects in the pipeline. As per its Corporate Plan 2018-25, the company has outlined a capacity addition of over 17,771 MW till 2025 through direct implementation, JVs and acquisitions. These would be based on lignite, coal and renewables. On the lignite front, the company is looking to add almost 3,540 MW of capacity. In the coal-based segment, a capacity addition of over 5,980 MW is proposed.

With respect to renewables, almost 3,560 MW is expected to be added in various states including Tamil Nadu and the Andaman & Nicobar Islands by 2020-21. This includes 909 MW of solar capacity, which is expected to come up in Tamil Nadu by April 2019. Of this, 709 MW of capacity was won in the 1.5 GW auction conducted by TANGEDCO in 2017. The PPA for this project was signed with TANGEDCO in September 2017 at Rs 3.47 per unit.

In November 2017, NLCIL was tasked with the setting up of solar power projects on vacant railway land. The power generated from these projects would be procured entirely by the railways. This is one in a series of solar projects that the company has undertaken or commissioned in order to diversify its generation base. Meanwhile, NLCIL has received in-principle clearance from the Odisha government for setting up 250 MW of solar projects, to be built at a cost of Rs 45 million per MW.

NLCIL has also been proactive in entering the solar plus storage market. In 2017, it had issued a tender for the installation of 20 MW of solar power capacity with 28 MWh of battery-based energy storage systems (BESS) in the Andaman Islands, which was scrapped in February 2018. A month later, NLCIL retendered this capacity with 8 MWh of battery storage capacity, which made the project more economically feasible. Mahindra Susten emerged as the lowest bidder in both these tenders. However, in October 2018, NLCIL issued a letter of award to Larsen & Toubro Limited, which was one of the bidders, for an EPC contract worth Rs 1.32 billion to implement the project.

NLCIL and Coal India Limited (CIL) have signed an MoU for forming a JV to develop 3 GW of solar power projects. As per the MoU, the JV company will have a 50:50 equity participation. The projects will be financed in a debt-equity ratio of 70:30 as per Central Electricity Regulatory Commission (CERC) norms and will be completed over a period of 15 months. The projects will be set up on CIL’s identified barren and reclaimed free land (about 15,000 acres) and also across the country, at an estimated cost of Rs 120 billion. A concept paper has been initiated by the two companies to get clearance from their respective boards.

Going forward, the participation of PSUs in the solar segment is expected to increase on the back of falling capital costs and better support from the government. With strict renewable purchase targets to fulfil, NLCIL is looking to expand its footprint in this space and, given its deep pockets, it is well-positioned to do so.

However, according to credit rating agencies, NLCIL remains exposed to receivables collection risk, given the weak credit risk profile of key consumers, which are primarily state discoms. Much of the power generated by NLCIL is sold to TANGEDCO, which is still in the red. The company also faces risks relating to time and cost overruns due to its large ongoing capacity expansion. Also, the increasing costs (both social and economic) of land acquisition may delay the company’s proposed projects and impact the operating cost of projects.

That said, given NLCIL’s long track record in power generation and robust operations, it is likely to achieve its capacity augmentation goals.