Mobilising competitive finance has been a constant challenge for the Indian renewable energy industry even as it remains on an impressive growth trajectory. It has become even more difficult in the current market scenario where lower-for-longer tariffs are encouraged due to intense competition and ambitious targets, thereby reducing profit margins for stakeholders. Although achieving the short-term target of 175 GW by 2022 and long-term target of 350 GW by 2030 is a mammoth task, unsustainably low tariffs are likely to dampen investor interest. Further, emerging markets offering better returns to investors could divert funds coming into the country.

Capital worth over $100 billion needs to be raised to achieve the set targets and ensure India’s successful transition to a green economy. While conventional energy projects in India have been largely dependent on public sector financing, renewable energy financing has been primarily driven by the private sector. This is because there is limited public financing available for the renewable sector. However, funding from the private sector is yet to reach the desired scale.

Renewable energy growth in India has been largely funded by the private sector with banking institutions as the primary lenders. However, banks are cautious by nature. This acts as a barrier to mobilising the necessary capital. Renewable energy projects are perceived to be a high-risk and low-return (more so with the current low-tariff scenario) investment, and do not lend a lot of confidence to banking institutions, which are typically conservative by nature. In fact, these institutions are more comfortable funding coal-based projects, purely because the risk bias is in its favour.

Meanwhile, the 70:30 mix of debt-equity may not be the optimal financing option either given the high cost of debt capital in the country, especially from banking institutions. That said, private equity (PE) players continue to provide the required capital. There is, however, a gradual shift to project financing, instead of entity-based financing, or balance sheet financing, wherein a particular project is provided with the necessary capital instead of the developer/entity owning it.

The domestic lending market is rather closed, with a handful of players dominating the sector. The threat of competition from newer institutions is low, thereby creating an environment where domestic commercial lending will remain restricted to a few players. As a result, the lending conditions are not expected to change significantly in favour of the market. It must be noted that at this point, the market is not oligopolistic. Arguably, the entry barriers for financing renewable energy projects in the country are high and exit barriers low, but this is purely on account of the nature of the sector.

About $2,570 million has been committed by several banks and non-banking financial institutions according to a working paper by the Asian Development Bank Institute (ADBI) published in August 2018. A detailed analysis of the commitments indicates a clear domination of non-banking financial institutions, contributing about 59 per cent of the total funding received by the sector. The remaining commitments come from banks with the contribution of public sector banks (22.1 per cent) marginally higher than that of private banks (19.5 per cent). Among all institutions, IDFC accounts for the largest commitments to renewable energy projects in India.

There has also been an increase in imported capital in the Indian renewable energy sector given its growing popularity. International development banks, institutional investors, pension funds, and PE investors have entered the market. A glaring fact, however, remains the absence of international commercial banks from the sector, presumably on account of the greater risks associated with a growing market and a dynamic policy framework. While the influx of low-cost international capital has increased the competition in renewable energy financing, such capital is not accessible to all projects in the country. The low interest rates on debt capital are typically provided to projects with better returns, in resource-rich states.

Even as the renewable energy market has been recognised as one of the priority sectors for lending by the Reserve Bank of India, it has not received as encouraging a response as expected. One of the biggest hindrances remains the inclusion of renewable energy into the larger “energy” sector, which leads to funds being diverted to conventional projects. Meanwhile, low interest rates from public sector non-banking financial companies such as the Indian Renewable Energy Development Agency (IREDA) help mobilise some capital in the market. 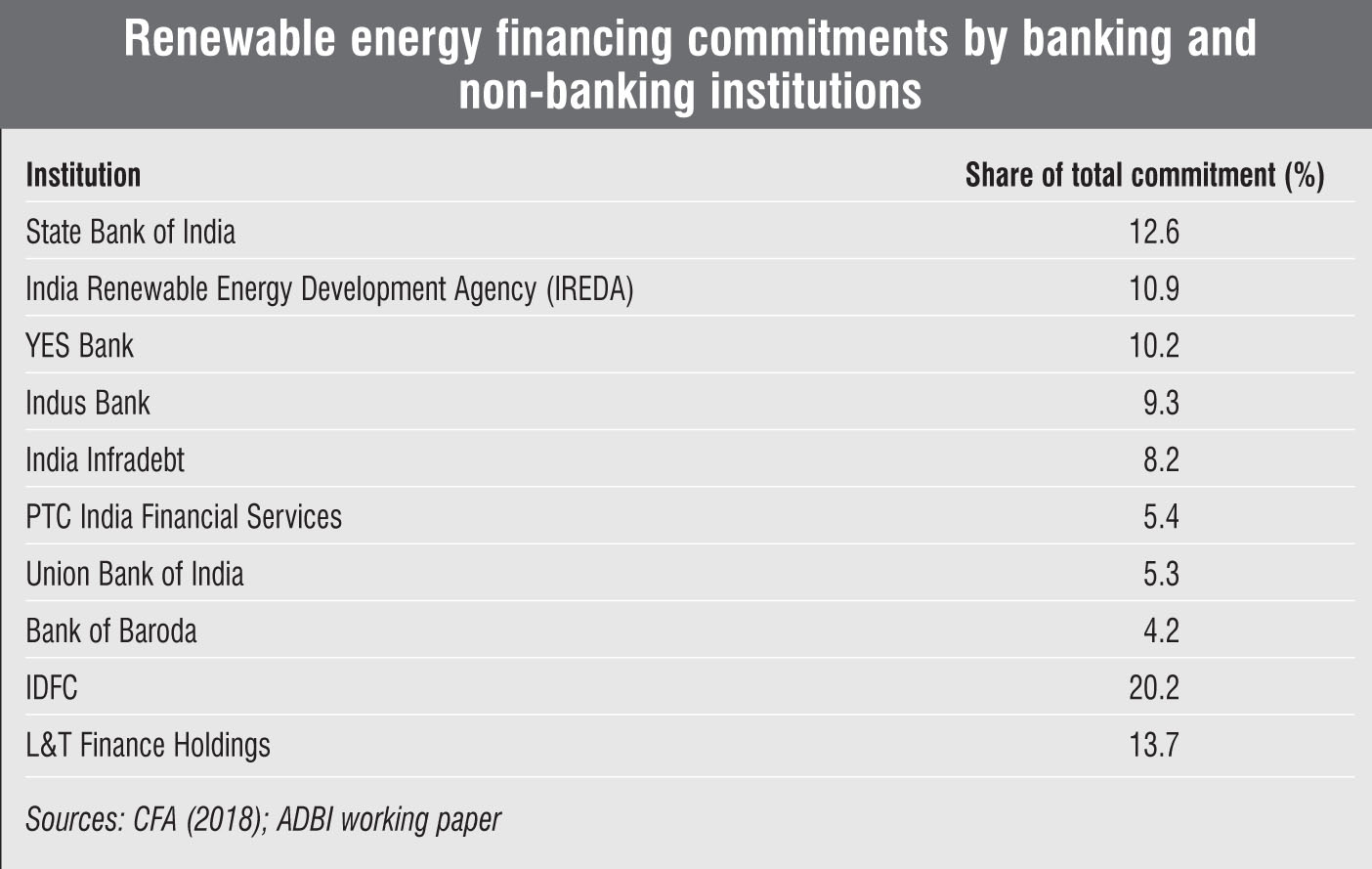 Some of the challenges faced by the renewable energy sector are on account of the fact the electricity is a concurrent subject. The ambiguity surrounding policies and their implementation at both levels creates an atmosphere of uncertainty, which restricts the smooth functioning of the market. Moreover, the decentralised nature of policies divides the renewable energy market into various states as viewed by investors. The investment potential is judged according to the location of the project, as opposed to the general centralised market. As a result, the resource and infrastructure-rich sub-markets are favoured. Parameters such as ease of doing business, investment returns, payment standards and ease of project development must be assessed centrally to expand the market in all parts of the country, especially in states with relatively low renewable energy potential. Single-window clearance systems implemented in Andhra Pradesh and Tamil Nadu should be replicated in other states to achieve a standard procedure and increase investor interest.

A major impediment to the growth of the renewable energy sector in India is the short-term, high-cost nature of debt capital. While international investors have provided low-cost capital to projects, unlocking such investments across the country for all projects will be crucial to the development of the market. Debt capital for solar power projects is charged a high interest rate of about 13 per cent with short tenors. The dynamic nature of these loans (short-term loans create uncertainties regarding the interest rates during the period after the end of the loan tenors) goes against investor principles that revolve largely around fixed interest rates. The Indian banking system has forever struggled with the concept of long-term capital investment in emerging sectors, which reflects in their inability to provide loans for more than 10 years, as opposed to the typical project life of 25 years. Increasing the debt tenor to 15 years would create a more comfortable environment for investors by decreasing the life cycle cost of capital. Further, if equity capital is funded by third-party sources, banks become even more reluctant to provide debt capital.

The challenges in renewable energy financing arise from the nature of the market and the legacy issues of financing institutions. The resource-based division of projects, location-specific policies and ambiguous and decentralised regulatory system make disbursement of capital and generation of returns even more difficult. However, given that the market is still under development, it is expected to overcome these challenges with time. To this end, the government will play a critical role in creating an enabling environment where banks and financial institutions will provide low-interest, high-tenor capital even in a low-tariff scenario.