Karnataka is among the leading states in renewable energy with an installed capacity of over 12 GW, which accounts for nearly half of the state’s total installed power capacity. Of the total renewable capacity, about 5 GW was added in 2017-18. Karnataka Power Transmission Corporation Limited (KPTCL), the state’s transmission utility, has been modernising, upgrading and augmenting its network to support large-scale investments in renewable energy. It is implementing several projects under the Green Energy Corridors (GEC) initiative. Meanwhile, it is implementing a number of technology initiatives to ensure that its network not only has high system availability, but also meets the state’s energy requirements adequately. 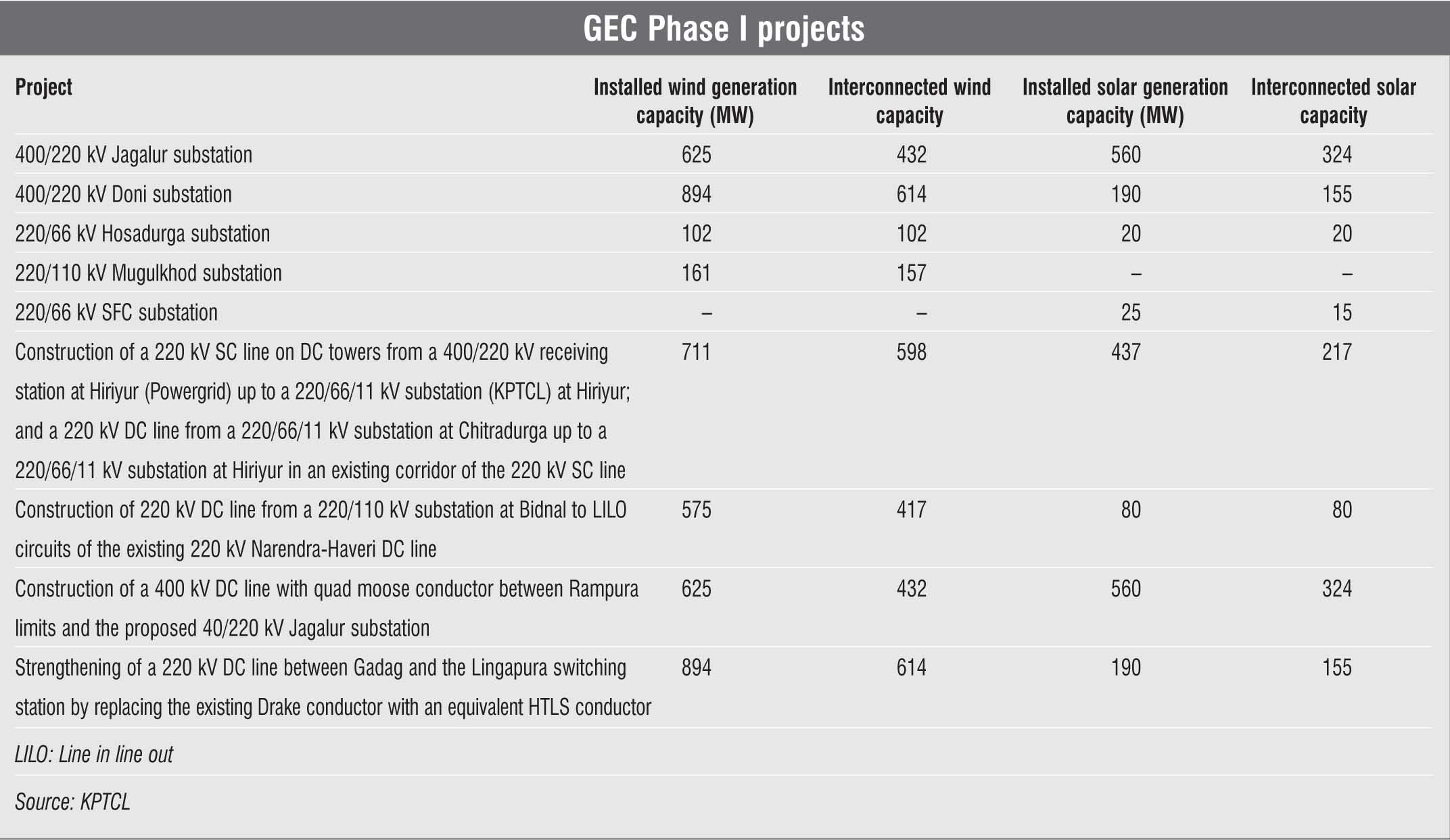 Technological advances along with new designs and construction techniques have helped the transco cope with a number of challenges. For instance, to overcome space constraints owing to rapid urbanisation in the state, KPTCL has designed narrow-base towers at different voltage levels to replace the conventional broad-base towers.

Another initiative taken by KPTCL has been to update its design methodology for transmission towers from the old design code IS-802 (1977) to IS-802 (1995). Towers based on the old design were capable of being thermally loaded only up to 75 0C and were based on the older wind zones classification. With the change in standard, the tower’s conductor temperature can be raised up to 85 0C, thus improving the power handling capacity of the transmission line. Also, now all 220 kV towers have been standardised as per the revised standard. Further, to address right-of-way (RoW) issues and build transmission lines in forest areas, KPTCL initiated the use of V-string insulators in place of I-string insulators. This has enabled the company to upgrade the existing 110 kV Varahi Shimoga single circuit (SC) line at the Varahi hydel power generating station to a 220 kV double circuit (DC) line keeping the same corridor width of 22 metres.

Another technology that the transco is deploying to optimise space is monopoles. In January 2018, a 220 kV line, passing through an industrial area (Jigani industrial area), was constructed using monopoles, which helped to lay the line in the median of the road with a narrow width (1.5 metres). In addition, KPTCL used single-side crossarm towers to avoid cutting of trees on both sides of the line corridor and reduce the RoW to half the recommended width for conventional towers with crossarms on both sides. 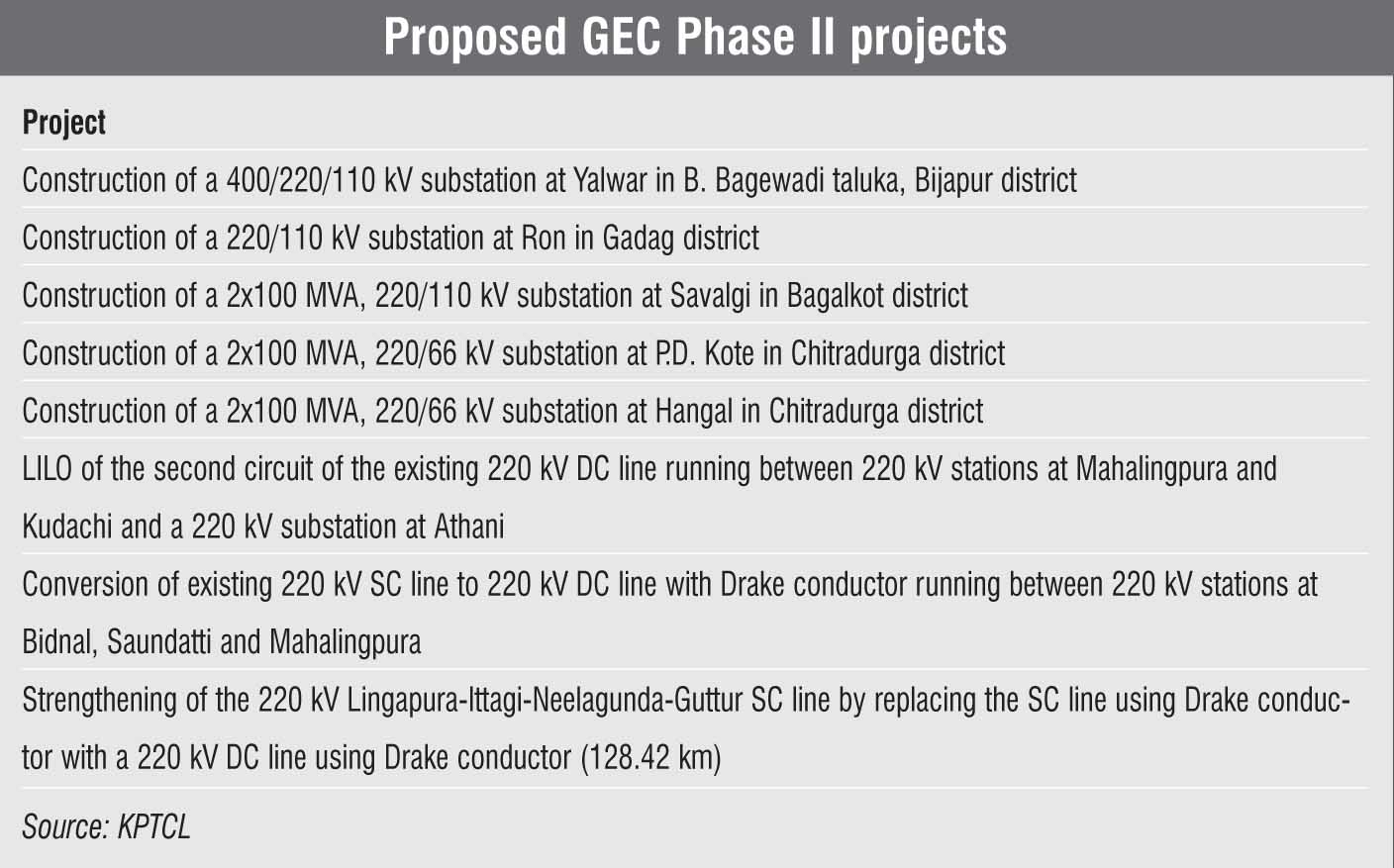 Further, to cater to the evacuation needs of the upcoming wind and solar power projects in Karnataka, KPTCL has launched projects, which are currently in the pipeline. Under Phases I and II of the GEC project, KPTCL has planned several line and substation projects in the 400-220 kV range. The company is also planning to deploy new-generation conductors in its network such as high-temperature low-sag (HTLS) conductors. The existing 66 kV SC transmission lines in Bengaluru city, which were commissioned nearly four decades ago using aluminium conductor steel-reinforced (ACSR) conductors, are now proposed to be replaced with HTLS conductors by KPTCL.