India has installed approximately 2.5 GW of rooftop solar systems till date, which is approximately  94 per cent less than the 40 GW target set for 2022. According to BRIDGE TO INDIA, the commercial and industrial segment is the most active, accounting for 70 per cent of the installed capacity.

The distribution companies (discoms) are now focusing on the residential segment to scale up rooftop solar installations. Although the residential segment is subsidised, the discoms are finding ways to tap its full potential to meet their renewable purchase obligations (RPOs) and the consumers’ ever-increasing demand for energy. Renewable Watch shares the story of two discoms that are promoting rooftop solar installations.

The substantial gap between the demand and supply of power in Andhra Pradesh nudged the state government and Andhra Pradesh Southern Power Distribution Company Limited (APSPDCL) into augmenting the generation of renewable energy with a focus on rooftop solar. The state can harness rooftop solar extensively due to various supporting factors. First, Andhra Pradesh is blessed with 300 sunny days in a year with solar irradiance of more than 5 kWh per m² per day. Second, a widespread electric grid network and an efficient evacuation infrastructure in the state facilitate the uptake of rooftop solar. Moreover, the good performance of discoms in the state makes the promotion of captive projects financially feasible.

From the table it is evident that APSPDCL found it hard to achieve its rooftop solar target. A different approach and policy was needed to reverse the trend. To this end, APSPDCL planned to adopt the capital expenditure (capex) model to target the low-end consumers (who consume less than 2,700 units of power per annum). APSPDCL now provides an upfront subsidy of 45 per cent over and above the 30 per cent subsidy provided by the Ministry of New and Renewable Energy. For the 0.5 kWp and 1 kWp modules, the consumer pays only Rs 5,000 and Rs 15,000, respectively.

As a result of this scheme, over 1,200 applicants registered for a rooftop solar system in the city of Tirupathi in less than two months. While in Vijayawada, more than 60 1kWp systems were erected in a span of 15 days.

The state government has made changes in its Solar Rooftop Policy of 2015 to further promote the segment. Under the new policy, the maximum capacity allowed for a rooftop project has been doubled to 1,000 MW. For the benefit of consumers, the new policy has also allowed the use of net and gross meters along with battery storage systems. Meanwhile, energy settlement is done on a quarterly and monthly basis for net meter and gross meter consumers, respectively. Further, to increase scale, group housing societies were made eligible for rooftop solar systems. 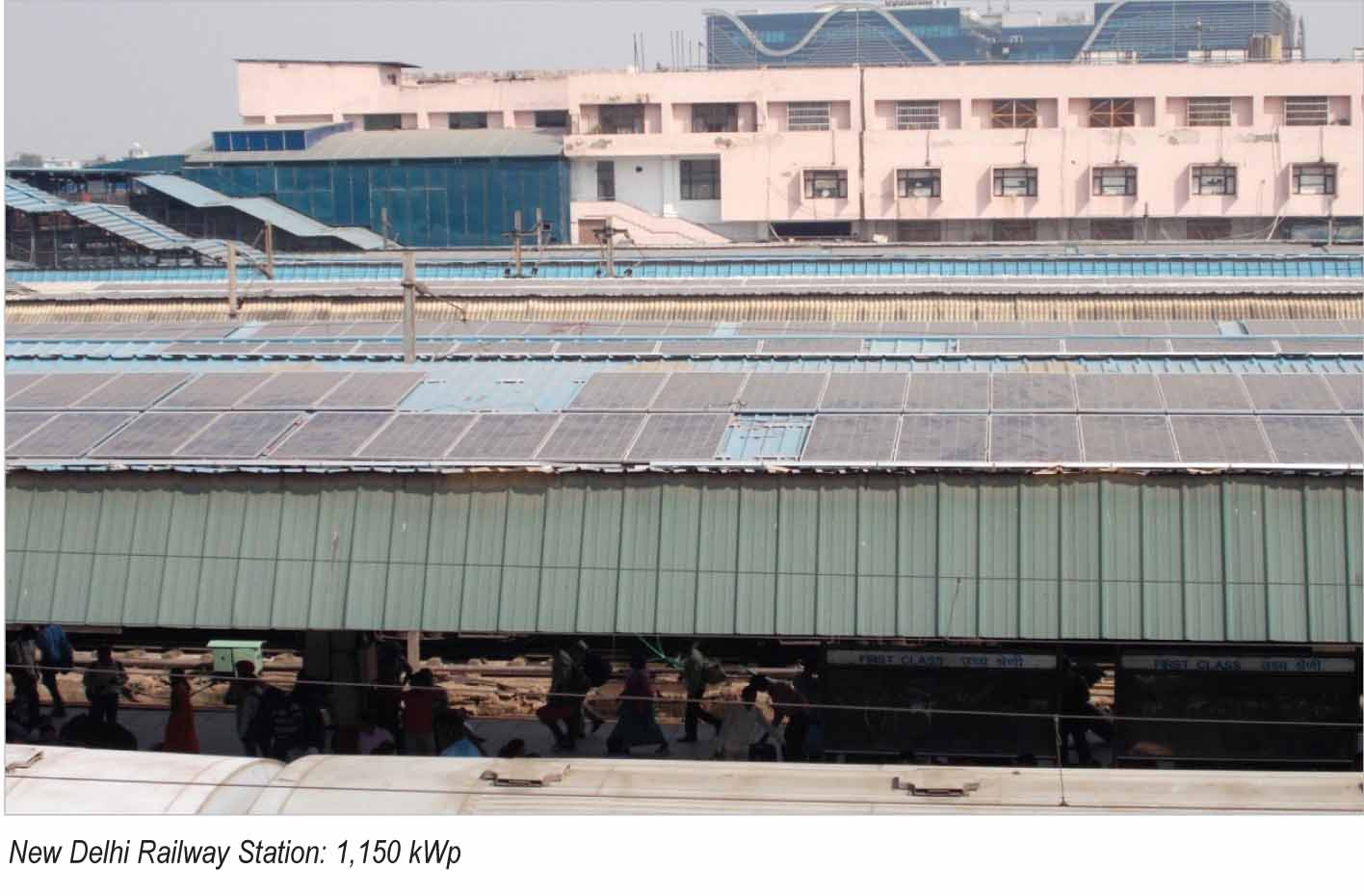 BSES Yamuna Power Limited (BYPL) and BSES Rajdhani Power Limited (BRPL) are  joint ventures between Reliance Infrastructure Limited and the Government of the National Capital Territory with shares of 51 per cent and 49 per cent, respectively.

BYPL operates in Central and East Delhi, and serves over 1,250,000 domestic customers, who add up to 75 per cent of its total customer profile.

The discom is keen to promote solar energy to achieve its RPO of 4.75 per cent and reduce the burden on the existing distribution transformers (DTs) in the city where the load is increasing at 7 per cent per annum.BYPL was, in fact, the first discom in Delhi to set up a rooftop solar system of 20 kWp capacity in East Point Education Society, Vasundhra Enclave in January 2015 after the Delhi Electricity Regulatory Commission (DERC) rolled out its net metering guidelines in September 2014. Later, BYPL also installed 350 kWp of rooftop solar systems on 54 of its own grids.

Currently, 356 applications with a combined capacity of 19.7 MWp have been received. Of this, installations of 17.4 MWp 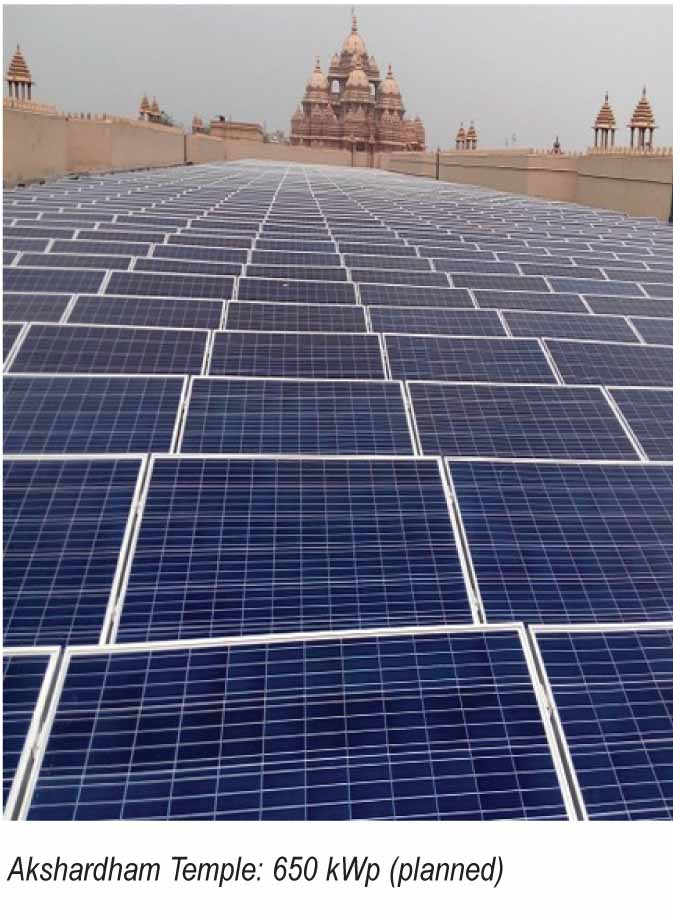 capacity have been completed and the rest are under construction. However, the lack of consumer awareness, ignorance on part of the installers and operational complexities continue to be the key issues for the discom.

According to Clause 8.4 in the DERC (Net Metering for Renewable Energy) Regulations, 2014, all meters need to be installed at accessible locations to facilitate easy access by the discom. However, this is not always followed by the installers. Many a time, the installer sets up the meters on the rooftops or on the top floors to cut the costs on cables.

There are many cases where customers did not install lightening arresters or installed the smaller ones instead just to comply with the rules. To save money, the earthing arrangements for these lightening arresters are either not carried out or some pseudo-arrangements are made like connecting the arresters and other cables with the water pipelines or hand pumps. In the same context, BYPL officers have often noticed rusted mounting structures.

Going forward, as more rooftop solar systems are installed, the safety of linesmen and engineers will become paramount, leading to additional operational complexities. Meanwhile, BRPL, which operates in West and South Delhi, partnered with GIZ and The Energy and Resources Institute to launch the Solar City Initiative in January 2018, with the purpose of setting up grid-connected rooftop solar projects to manage the increasing peak electricity demand in Delhi.

In Phase I, Dwarka was selected for the installation of such projects. The electricity generated is used to power common facilities such as lifts and street lights, and the surplus electricity, if any, is fed into the grid. To facilitate the integration of solar power with the grid, net meters were installed in every flat. Since the launch of the initiative, 14 societies have installed rooftop projects totalling about 1,000 kW in capacity, and work at six more societies is in progress. According to a BRPL official, the combined capacity of rooftop solar projects in Dwarka could cross 2.5 MW in the near term. The operating expenditure (opex) model is popular here. In the case of Shiv Bhole CGHS, a tariff of Rs 2.66 per kW (inclusive of the generation-based incentive of Rs 2 per kW provided by the Delhi government) has been decided. It is around Rs 2.40 per kWh lower than the tariff charged by the discom earlier.

In Phase II, BRPL has decided to cover Shakur Basti. The area has many colonies and BSES estimates the solar rooftop potential to be about 15 MW. BRPL is also targeting to install rooftop net-meters of 5 MW capacity in the area by 2019-20. 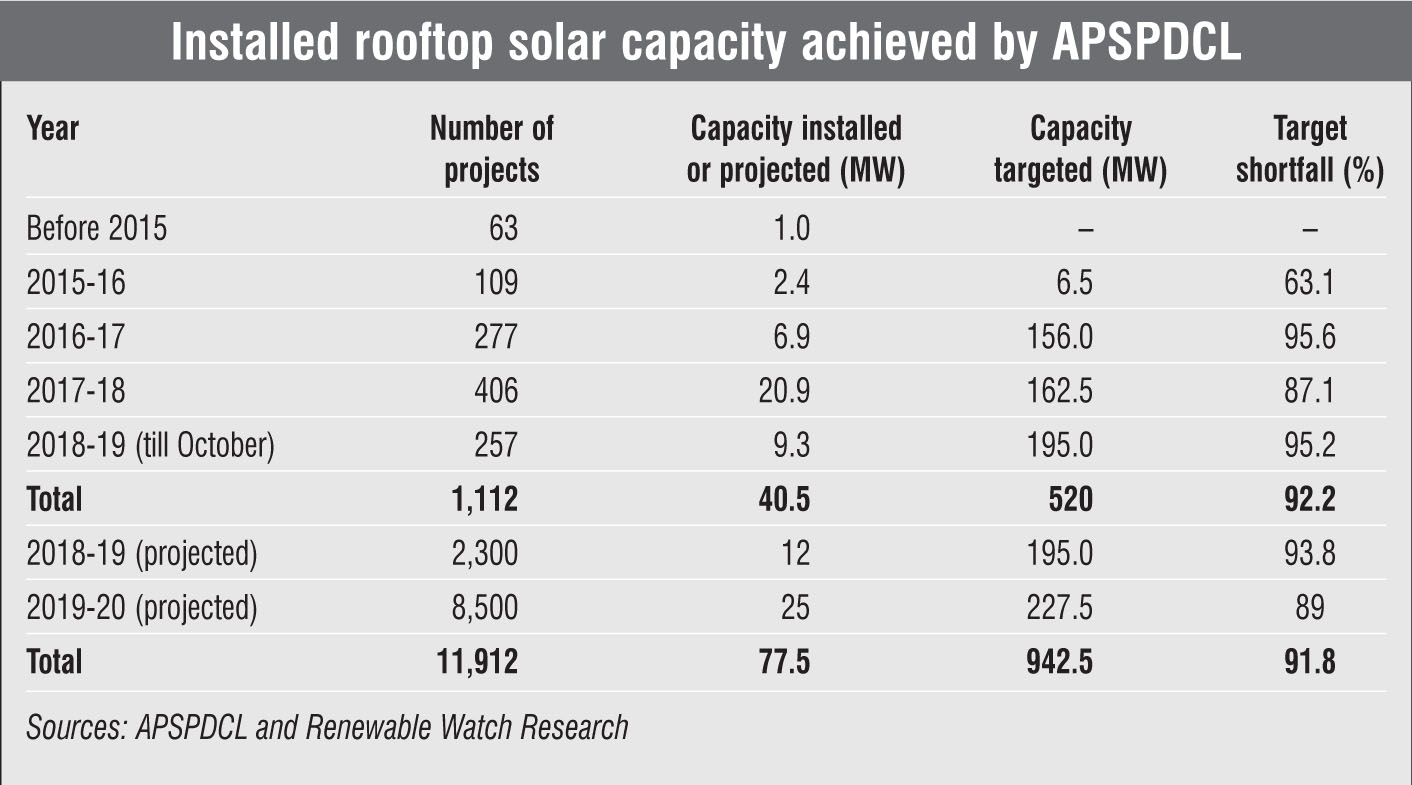 To achieve similar success in RPO mandates and for easing the load on the existing DTs, APSPDCL and BSES have taken two different routes. While APSPDCL uses the capex model for consumers with less electricity requirements, BRPL has placed its bet on the opex model to promote rooftop solar systems. Apart from the use of appropriate business models, solving the issues pertaining to consumer awareness, and operations and maintenance of rooftop projects will be key to meet the rooftop solar target of 40 GW by 2022.