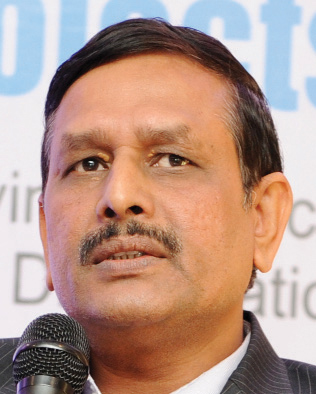 Prior to this, Sinha worked with HBL Power Systems Limited, which was involved in the manufacture of batteries and inverters. He looked after the company’s hybrid and off-grid solar applications. Earlier, he worked at Brahmos Aerospace, a joint venture between the Defence Research and Development Organisation of India and the Federal State Unitary Enterprise, NPO Mashinostroyenia of Russia.

Sinha is known for taking on challenging projects. While he believes that the implementation of each rooftop solar project is a challenge, he recalls two projects as being particularly difficult to implement. One was a 90 kW rooftop solar system at SCOPE Complex in Delhi. Eight dome-like structures, more than 35 metres high made the designing of the system very complex. Another was on the Engineers India Limited building in Chennai, where the designing cost of the structure was nearly same as the cost of the solar module.

Under Sinha’s leadership, Fourth Partner Energy has doubled its revenue every year over the past five years. In 2017-18, the company installed 30-35 MW of projects and in 2018-19, it plans to add 90 MW of capacity. In 2019-20, Sinha has set a target to set up 150 MW of rooftop solar systems. He is also exploring opportunities in the floating solar and EV charging infrastructure segments as well as open access for commercial and industrial customers. Sinha believes that finding solutions for rooftop solar for residential users is the biggest challenge in the renewable energy sector.

Sinha studied engineering at Jamia Millia Islamia and then went on to do an MBA in marketing from Jiwaji University, Gwalior. His professional goal is to empower young engineers and to build a strong team in his company. He worries that a lot of engineers enter the job market every year but few are able to get jobs. Therefore, he has made it his professional motto to train them and help them build a stable career.

A man who believes in maintaining a work-life balance, Sinha likes to spend his spare time with his family, which includes his two daughters. He does yoga every morning to deal with work stress.