Biomass is an important energy source in India as about 32 per cent of the total primary energy used in the country is derived from biomass and more than 70 per cent of the country’s population depends on biomass for its energy needs. Further, biomass is a carbon-neutral fuel for electricity generation, used in many energy-intensive applications such as heating and transport.

The government has identified the potential and role of bioenergy in the Indian context and initiated several programmes for the promotion of biomass conversion technologies in various sectors. India had set a target to install 1 GW of biomass-based power capacity by 2022. It has already achieved 90 per cent of the target with the installation of 8,869.10 MW of biomass-based power capacity, as of October 2018. In February 2018, the Ministry of Power released a policy mandating the use of 5-10 per cent biomass pellets alongside coal for power generation in thermal power plants across the country. Following this, NTPC Limited rolled out a tender to procure residue-based biomass briquettes for co-firing its coal-based plants.

In India, biomass can be sourced in multiple ways. The most common source is agricultural residues, which are abundantly available in the form of straw, husk, shells and leaves. One kg of paddy can provide around 3 kg of crop residue. The crops that yield a large quantity of agro waste in India are sugarcane, paddy, wheat, maize, cotton, etc. Moreover, residues from forests and energy plantations can be used for bioenergy generation. Rejects from industries such as sugar (bagasse) and wood (wood chips and sawdust) are also used for making biomass pellets and briquettes for use in energy applications.

Biomass can be combusted in boilers to produce steam, which can be used as process heat in industries as well as for driving a steam turbine to generate electricity. Biomass and pulverised coal are co-fired in captive power plants to lower the cost of fuel and generate additional revenue through sale of excess power. Thus, power production from biomass is a cost-effective method of providing renewable electricity in regions with high biomass potential. Furthermore, the use of a locally derived fuel promotes energy independence, creates employment opportunities and provides direct economic benefit to local communities.

India has about 20,000 MW of biomass potential. In May 2018, the Ministry of New and Renewable Energy (MNRE) announced a programme to support the promotion of biomass-based cogeneration in sugar mills and other industries. Under this, central financial assistance (CFA) will be provided to sugar mills for grid-connected biomass power and bagasse-based cogeneration. Further, the ministry provides CFA of Rs 20 million per MW under its programme on energy from urban, industrial and agricultural waste or residues.

Biofuels are liquid or gaseous fuels that are produced from biomass resources and are used in place of or in addition to diesel, petrol and other fossil fuels for transport, stationary, portable and other applications. Biofuels can satisfy energy needs in a sustainable and cost-effective manner while reducing the dependence on fossil fuel imports. The recent SpiceJet flight from Dehradun to Delhi, which used a combination of biofuel derived from the jatropha plant (25 per cent) and aviation turbine fuel (75 per cent), has demonstrated the successful use of biofuels in the aviation sector for reducing emissions in air transport.

The government recently released the national policy on biofuels to promote investment in biofuels and extend appropriate financial and fiscal incentives to private players in the sector. Under the policy, biofuels are categorised as basic or first-generation biofuels (bioethanol and biodiesel), and advanced biofuels, which are further divided into second-generation (2G) biofuels (ethanol, municipal solid waste) and third-generation biofuels (bio-CNG, etc.). The policy also allows the production of ethanol from sugarcane juice, sugar-containing materials (like sugar beet and sweet sorghum), starch-containing materials (corn and cassava), and damaged food- grains like wheat, broken rice and rotten potatoes that are unfit for human consumption. The government is also implementing the ethanol-blended petrol (EBP) programme through its oil marketing companies (OMCs). Under the programme, OMCs can sell EBP with up to 10 per cent ethanol. The OMCs have planned to set up 12 2G ethanol biorefineries in 11 states. 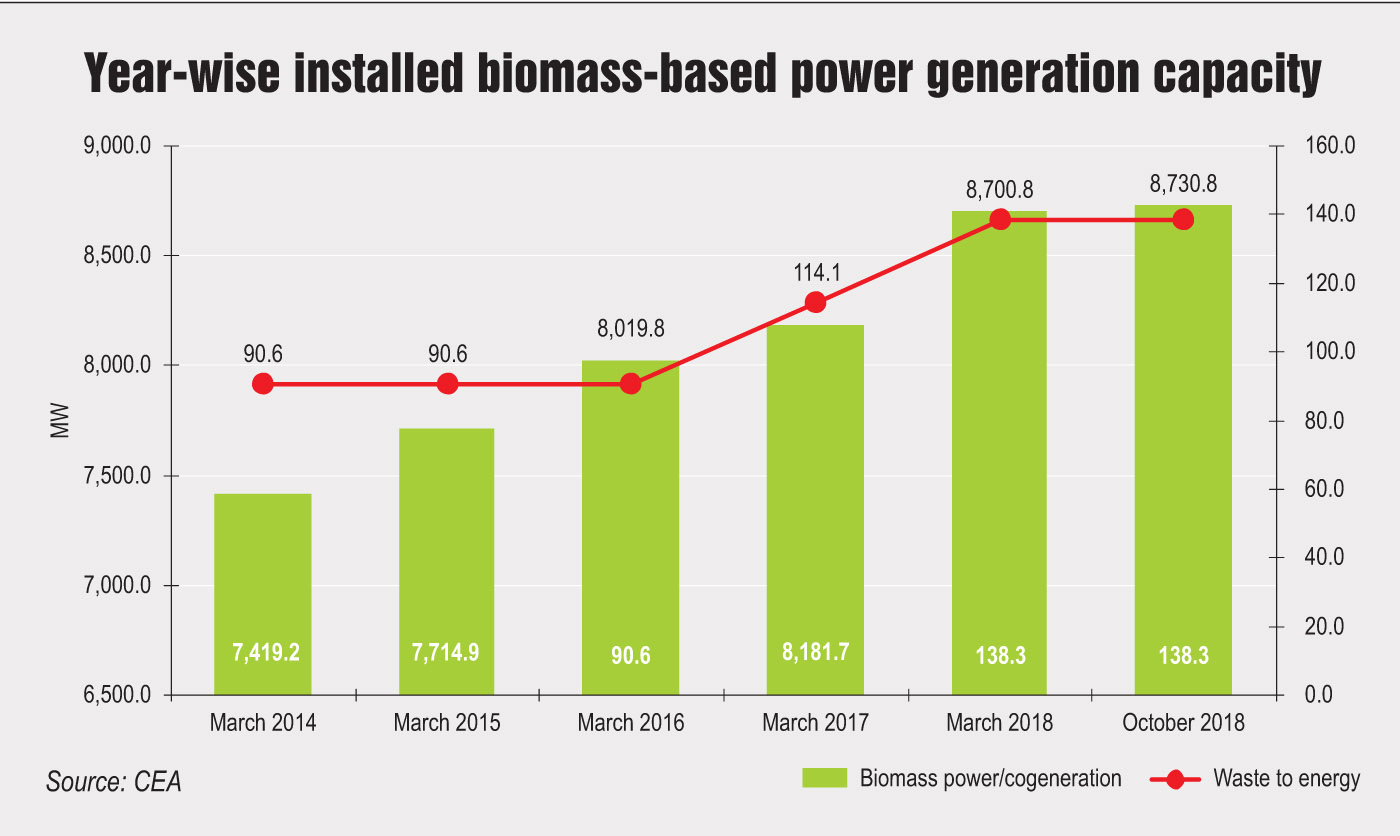 Biogas is a mixture of different gases produced from the breakdown of agricultural waste, manure, municipal waste, plant material, sewage, green waste, or food waste, in the absence of oxygen. It can be used as a clean energy source for cooking and lighting as well as for electricity generation. Biogas can be further purified and processed to form bio-CNG, which is similar to natural gas in terms of its composition and properties. It is a cleaner alternative to fuels such as petrol and diesel and is ideal for use in automobiles and power plants. In March 2018, the MNRE launched the National Biogas and Manure Management Programme with the aim of setting up family-type biogas plants for providing biogas for cooking and lighting applications. It also promotes the use of by-products of these processes as organic biomanure for enhancing crop yield and maintaining soil health. 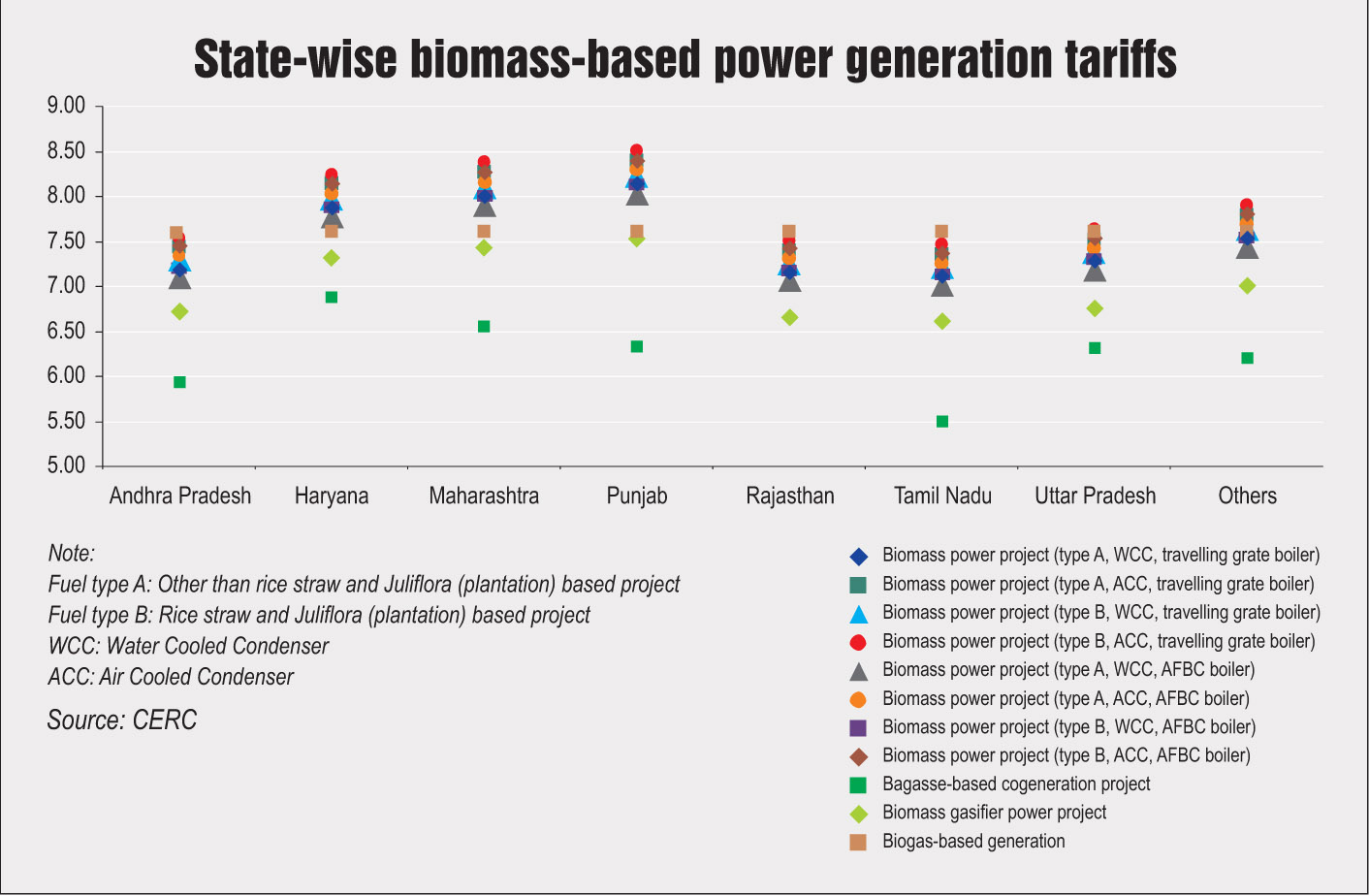 As a zero-emission energy source, biomass can emerge as a key alternative fuel and increase the country’s energy security. The various new programmes and policies rolled out by the government are a positive step in this direction and will provide the much-needed support for the development of the segment. However, bioenergy sources hold a 12 per cent share in the renewable capacity mix and only 3 per cent share in the total installed capacity in India. Thus, despite being close to achieving the set targets, biomass is far from making a significant impact as a clean energy source.