The socio-economic relevance of 24×7 power supply to the country’s rural and underserved areas cannot be stressed enough. However, multiple cost and technology challenges have restricted the grid from reaching these areas. Renewable energy-based offgrid power systems, especially solar, have emerged as a sustainable alternative to the grid for myriad purposes including lighting, cooking, irrigation and heating. Renewable Watch takes a look at the developments in the offgrid space in the past year…

The offgrid and decentralised solar applications programme of the Ministry of New and Renewable Energy (MNRE) was introduced during the initial years of the National Solar Mission, with Phase I being implemented in 2012-13 and Phase II in 2013-17. In August 2018, the MNRE released guidelines for Phase III of the programme for the years 2018-19 and 2019-20. A total of 118 MW of offgrid and decentralised solar power projects have been envisaged under Phase III, with a financial outlay of Rs 6.5 billion spread over the two years. Of this, a target of 50 MW has been set for 2018-19, with an outlay of Rs 2.7 billion. For 2019-20, Rs 3.8 billion has been allocated to achieve a target of 68 MW capacity.

There has been significant growth in the adoption of solar pumps in the country. In 2017-18, 177,011 solar pumps were installed, up from just 11,626 in 2013-14 at the beginning of the programme, according to the MNRE. The ministry has set a target to install 1 million solar pumps across the country by 2021, which seems unlikely given the current status. Rajasthan leads the state initiatives in this space, with about 30 per cent of solar pumps installed. It is followed by Andhra Pradesh with around 20 per cent and Chhattisgarh with about 15 per cent of all solar pump installations. Chhattisgarh and Odisha had successfully met their targets for 2017-18, while Andhra Pradesh, Rajasthan and Uttar Pradesh lagged behind.

As part of the Union Budget 2018-19, the centre had announced the launch of the Kisan Urja Suraksha Evam Utthaan Mahaabhiyan (KUSUM), a subsidy-driven pump distribution scheme aimed at providing relief to farmers from rising diesel costs. The scheme is, however, yet to be rolled out owing to delays in approvals. Under the scheme, a central financial assistance (CFA) of Rs 480 billion will be provided over a period of 10 years, with  a similar amount coming from the states and financial institutions. To install a pump, a farmer would have to pay 10 per cent of the benchmark cost as down payment while the centre and states would provide a subsidy of 30 per cent each. The remaining 30 per cent would be in the form of a loan.

A total of 275 million solar pumps will be installed under the scheme, out of which 175 million will be stand-alone in offgrid areas and 100 million in grid-connected areas. Meanwhile, the benchmark costs for offgrid solar pumps for 2018-19 have been  released. The costs range from Rs 65,000 per HP for general category states for systems with a capacity of more than 3-5 HP (AC) to Rs 85,000 per HP for systems up to 3 HP (DC) capacity. For the north-eastern states, hill states and union territories, the corresponding costs vary from Rs 71,500 per HP to Rs 93,500 per HP.

In its guidelines for Phase III of the programme, the MNRE has set a target to install 300,000 solar street lights across the country by 2020. Under the scheme, special emphasis will be given to offgrid areas where grid-connected street lighting is inadequate, the north-eastern states and districts affected by left-wing extremism (LWE).

A CFA of 30 per cent of the benchmark cost or tender cost will be provided for the installation of solar street lights. For the north-eastern states, Jammu & Kashmir, Himachal Pradesh, Uttarakhand, Lakshadweep, and the Andaman & Nicobar Islands, a CFA of 90 per cent will be provided. The street lights will be procured through a centralised tender via designated public sector units (PSUs), which will undertake the bidding on behalf of the state nodal agency (SNA). Following vendor selection, a tripartite agreement will be signed between the PSU, the SNA and the vendor. The installation of street lights will be completed within a year from the date of issue of the letter of award (LoA).

For offgrid areas, the MNRE has set guidelines for the installation of individual solar power plants of up to 25 kW capacity, with the aim of providing power to schools, hospitals, hostels, panchayats and other public service institutions. A total of 100 MW of such plants are to be installed over the next two years. The target capacity will have to be allocated by March 2019 so as to provide enough time for projects to be completed by 2020. A 30 per cent CFA will be provided for the installation of these plants. For the special category states of the Northeast, Jammu & Kashmir, Himachal Pradesh, Uttarakhand, Lakshadweep, and the Andaman & Nicobar Islands, the CFA provided will be 90 per cent of the benchmark cost. 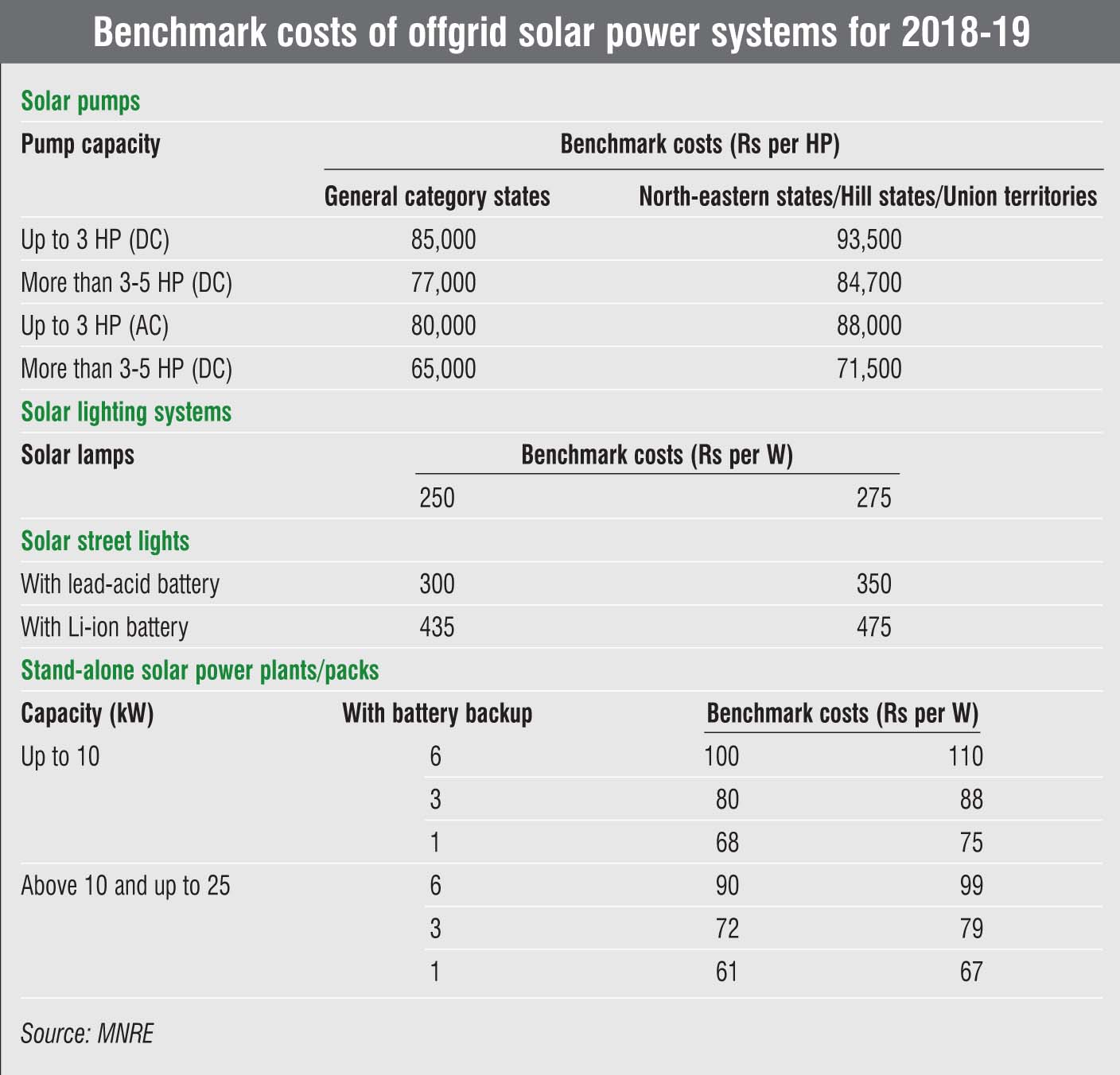 The scope of guidelines for Phase III sets a target for providing 250,000 solar study lamps for students in the backward areas of the north-eastern states and LWE-affected districts. A CFA of 85 per cent of the benchmark cost will be provided while the rest of the cost will have to be borne by the student. These lamps will be distributed within one year of the award of the LoA to the vendor by the designated PSU. In March 2014, 960,000 lamps had been distributed, and this went up to 1.99 million by November 2016. As of 2017-18, a total of 2.57 million solar lamps had been distributed in the country.

The adoption of biomass as a fuel in rural and offgrid areas in India has remained sluggish despite the availability of the raw material in abundance. For offgrid biomass systems, against a target of 7.5 MW for  2017-18, only 0.92 MW was achieved, bringing the cumulative capacity to 163.37 MW. Considering the huge shortfall, the target for 2018-19 was revised to 1 MW. However, as of July 2018, there have been no installations in this segment, indicating a lacuna in policy implementation and lack of demand for the technology.

One of the biggest roadblocks in the adoption of offgrid power systems continues to be the lack of a well-developed manufacturing base and vendor availability in the country. Moreover, securing loans from financial institutions remains a challenge for low-income inhabitants of offgrid areas, who are mostly dependent on seasonal agriculture-based earnings. Meanwhile, policy ambiguity continues to restrict the uptake of these systems as lack of awareness and subsidies deters the growth of the segment.

While grid-connected power continues to grow, the centre  must focus on framing enabling policies for offgrid power solutions as well. Providing financial incentives to investors and manufacturers will make the segment more attractive to them, leading to economies of scale and, therefore, a reduction in costs.