The dynamics of financing renewable energy projects in India have evolved as the sector is undergoing a paradigm shift. Deemed to already be a challenge, access to competitive finance for projects has become an even bigger hurdle as profit margins diminish and the payback periods increase. In fact, sensing the increasing reluctance of lenders to invest in renewable energy projects in India, R.K. Singh, minister of new and renewable energy, had to call a meeting of all stakeholders in September 2018 to address the pressing concerns such as operational risks regarding renegotiation of power purchase agreements (PPAs), threat of backing-down of power, removal of must-run status, and low tariffs.

Meanwhile, the market is abuzz with conversations around getting a better foothold on the financing of projects while protecting the interests of financiers and lenders to create long-term sustainable assets. Low entry barriers, falling profits, and high cost of debt capital have all made renewable energy assets vulnerable to market forces, severely affecting the viability of these projects. In addition to these, there is a threat of refinancing of projects required after five to ten years of operations owing to the unsustainability of the low tariffs.

It is expected that India will need over $100 billion of capital to achieve the 175 GW target by 2022. The magnitude of finance needed makes it critical for the sector to create a favourable ecosystem wherein financiers and lenders are provided with secure long-term returns. The Climate Policy Initiative (CPI) suggests that about $190 billion will be required to achieve the said targets. In a paper released by the think-tank in February 2018, CPI says that the renewable energy sector in India could be struggling with a financial shortfall of about $53 billion on account of a high reliance on banks for providing debt capital.

The past two years witnessed major events that have altered the shape of the renewable energy sector in the country. Considerable tariff depreciation in the wind and solar segments, competitive bidding for wind power, phase-out of accelerated depreciation and discontinuation of generation-based incentives are some of the developments that have changed not only the course of the sector but also the dynamics of financing renewable energy projects. Consolidation continues to be a major trend, while external commercial borrowings have experienced a surge. Debt and equity activity worth $5.2 billion took place in the past 12 months in the Indian renewable energy space, with about another $2 billion worth of bonds and debentures issued in the sector.

Renewable Watch analyses key financing deals in 2018 to assess the state of the market and determine a possible outlook.

In the past 12 months, 10 merger and acquisition (M&A) deals worth close to $4 billion have taken place in India, including two of the largest transactions in the history of the Indian renewable energy space. This excludes the Indian assets of Equis Energy sold to Global Infrastructure Partners in February 2018 as part of the acquisition of the former’s entire global portfolio for a price of $5 billion.

The acquisition of Ostro Energy by ReNew Power in April 2018 is the biggest transaction so far in terms of deal value and asset size. Valued at $1.63 billion, ReNew acquired 1,100 MW of Ostro’s assets—850 MW of operational capacity and 250 MW of capacity under development. With this deal, ReNew Power’s total capacity stands at over 5,600 MW, the largest renewable energy portfolio in the country. Ostro Energy’s assets are spread across Andhra Pradesh, Karnataka, Telangana, Rajasthan, Madhya Pradesh and Gujarat, and involve a host of offtakers, which reduces the risks associated with power offtake for renewable power plants. The Canada Pension Plan Investment Board (CPPIB) has invested $247 million in ReNew Power to support the capital required for the acquisition. Previously, CPPIB had infused $144 million in January 2018.

This is the third deal in a series of quick acquisitions by ReNew Power in less than 12 months. In November 2017, ReNew Power had acquired KCT Renewable Energy’s three fully operational plants, with a cumulative capacity of 103 MW, in a deal worth Rs 10 billion. In May 2018, ReNew Power acquired a 100 per cent stake in Indian Energy Limited (IEL) at a price of Rs 364 million. IEL owns and operates wind projects with a total capacity of 41.3 MW installed at two sites in Karnataka and Tamil Nadu.

Another landmark equity deal in 2018 was the on-again-off-again acquisition of the Delhi-based Orange Renewables by the GIC Holdings and Abu Dhabi Investment Authority-backed Greenko Group. In June 2018, Greenko was set to announce its acquisition of Orange for an enterprise value of $1 billion. However, in August, amid strong headwinds, the deal to acquire Orange by Greenko was called off for a host of reasons. Orange’s wind power assets in Andhra Pradesh proved to be a major pain point in the deal. Greenko also raised concerns regarding the status of Orange’s holding company that was to be acquired with all the assets by the former. As of October 2018, Greenko is at an advanced stage of closing the deal, with slightly altered terms. Greenko is now acquiring Orange for $925 million. In October 2018, Greenko also signed a pact to buy Skeiron Renewable Energy, with a portfolio of 385 MW of wind power projects, for an enterprise value of about Rs 35 billion. Skeiron is a renewable energy platform set up by Suzlon Energy, Olympus Capital and Asia Climate Partners. Other notable M&A deals include the acquisition of Kiran Energy Solar Power by Hinduja National Power Corporation Limited for Rs 10 billion in May 2018. In September 2018, Gale Solarfarms Private Limited sold a 49 per cent stake to CLP Private Limited in a deal worth Rs 390.6 million. 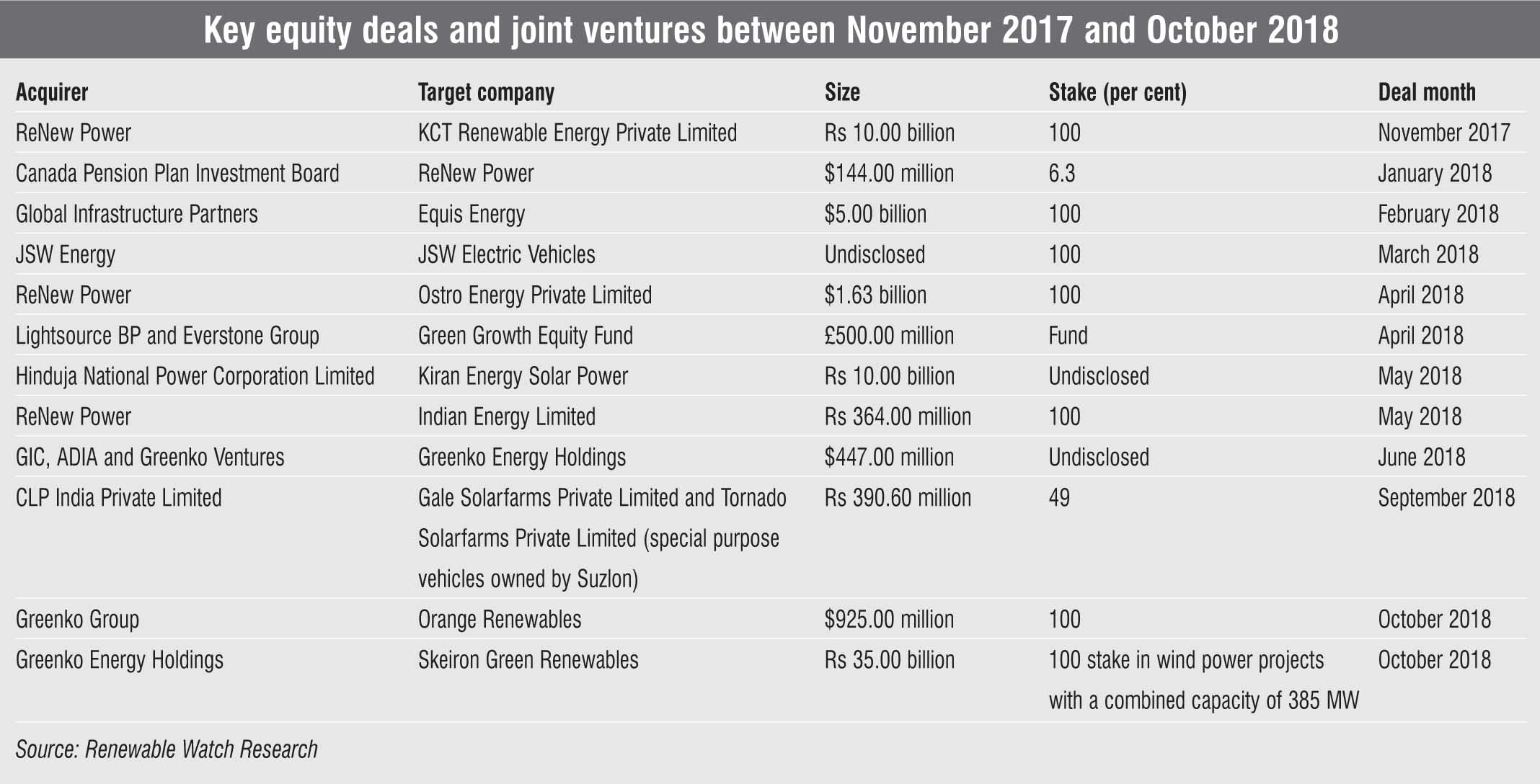 During the period between November 2017 and October 2018, 11 domestic and external commercial borrowing deals worth $1.2 billion were carried out in India. Most notable of these was the $200 million loan by the International Finance Corporation (IFC) to Indian green energy companies. Of this, $150 million was provided in February 2018 to Aditya Birla Finance Limited (ABFL) through non-convertible debentures (NCDs) issued by ABFL or through external commercial borrowings (ECBs) in Indian rupees. Meanwhile, Mahindra Renewables Private Limited received $50 million from IFC in January 2018, to set up a 250 MW project in the Rewa Ultra Mega Solar Park, Madhya Pradesh. In November 2017, the World Bank signed loan agreements for $98 million and a grant of $2 million with the Government of India. The funds will be managed by the Indian Renewable Energy Development Agency (IREDA) to provide sub-loans to states for investments in various solar parks.

IREDA received a credit line of Euro 150 million in March 2018 for a period of 15 years to finance green energy projects in India. Another $100 million was given by the Green Climate Fund to the National Bank for Agriculture and Rural Development (NABARD) in the same month. Tata Cleantech Capital Limited is responsible for the execution of this grant, which  will be used by NABARD to provide energy access to micro-, small- and medium-sized enterprises. 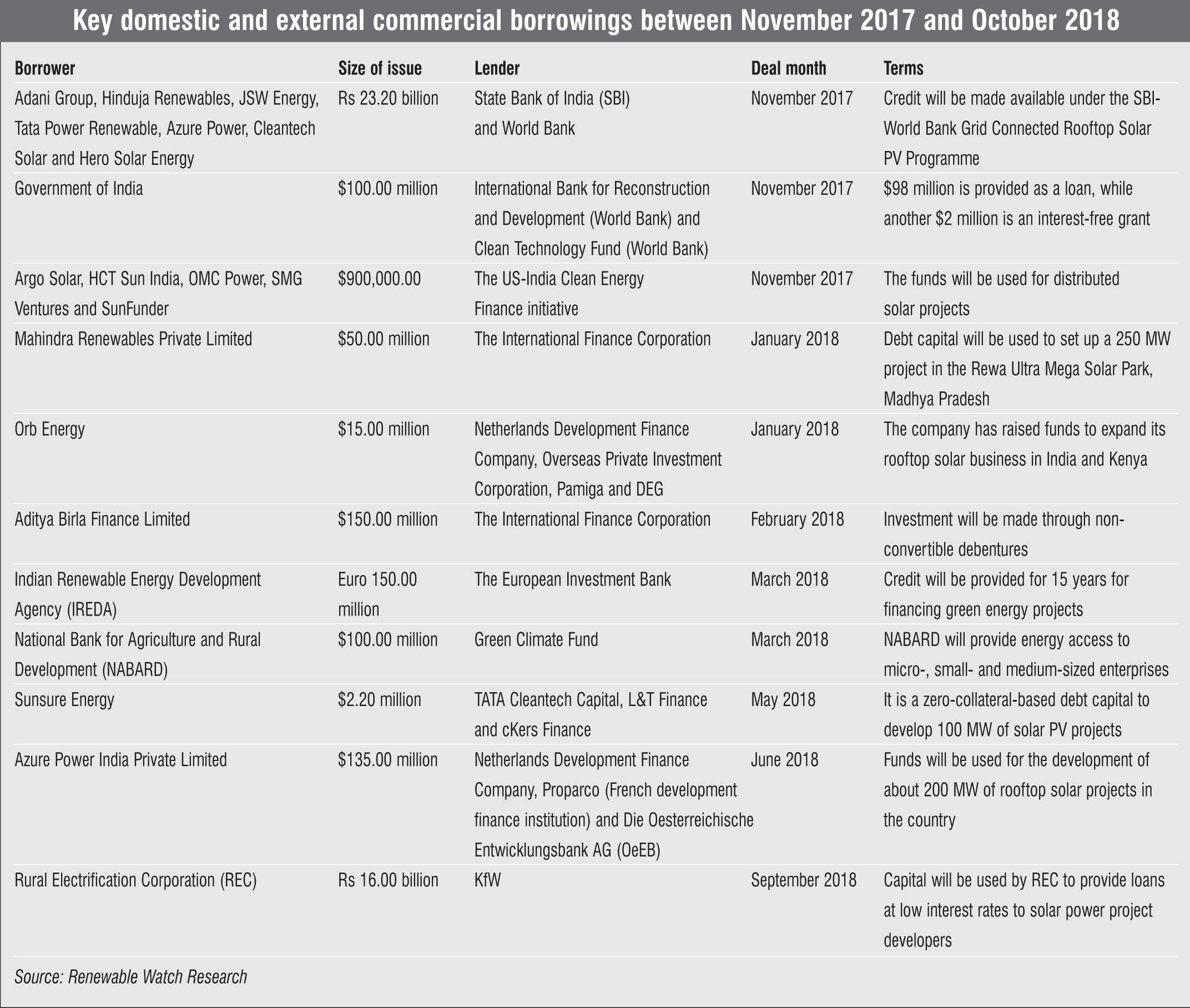 Given the scale and magnitude of growth in the renewable energy space in India, many companies have begun to consider initial public offerings (IPOs) as a preferred way of raising capital to fund their upcoming capacities. IREDA filed a draft red herring prospectus with the Securities and Exchange Board of India (SEBI) to launch its IPO. The non-banking financial agency aimed to issue 139 million equity shares priced at Rs 10 to the public on a book-building basis. Meanwhile, Solex Energy Limited (SEL) announced its IPO in February 2018 on Emerge, the National Stock Exchange’s platform for small and medium enterprises. The company is planning to issue 1,380,000 equity shares that are priced at Rs 52 per share and are expected to raise Rs 7.17 billion.

ACME Solar Holdings was the first renewable energy company to start listing procedures in India. In April 2018, the company revised its valuation by decreasing it by half and filed another draft red herring prospectus with SEBI, and later downsized its proposed IPO from Rs 22 billion to Rs 10 billion-Rs 15 billion. Meanwhile, after a series of acquisitions, ReNew Power filed its IPO papers with an expected size of $1 billion with SEBI in May 2018, the approval of which was received in July 2018. Sembcorp Energy India Limited also joined the list of companies looking to go public when it received SEBI’s approval in August 2018.

Green bonds have become a popular source of funds in the Indian renewable energy sector. In 2018-19, bonds and debentures worth about $2 billion were released across six bonds and two debenture deals. Most notable among these were the $650 million green bonds issued by the State Bank of India in October 2018. The Indian Railways Finance Corporation also released green bonds worth $500 million in January 2018 on the International Securities Market with a tenor of 10 years and an annual coupon rate of 3.835 per cent. In December 2017, Power Finance Corporation raised green bonds worth $400 million on the International Securities Market of the London Stock Exchange, with a tenor of 10 years and a semi-annual coupon rate of 3.75 per cent. Other bonds include the Greenko Group’s Rs 30 billion on-shore rupee-denominated bonds, Sindicatum Renewable Energy Company’s international green bonds worth Rs 2.5 billion and Power Grid Corporation of India Limited’s Rs 200 billion offering on a private placement basis in 2019-20, which is pending stakeholder approval.

In January 2018, ReNew Power issued non-convertible debentures (NCDs) worth $352 million in two parts, with $232 million through a multi-issuer cross-collateralised rupee bond and the remaining $120 million through a credit enhanced NCD, which has a tenor of 17 years. In December 2017, CleanMax Solar issued $15 million in the form of compulsorily convertible debentures.

An interesting outcome of the past 12 months has been the resilience displayed by the financing segment of the Indian renewable energy space in the face of the turbulent times seen in the past year. However, with investors now getting increasingly wary, such measures will need to continue as the market attempts to move towards stable and sustainable tariffs.

Given the rising downward pressures that have lowered exit barriers in the Indian renewable energy sector, consolidation is likely to continue for the next few years, at least until the market learns to sustain itself and moves from target-based to need-based growth. Meanwhile, the requirement of debt capital will continue to grow to fund projects at lower costs to achieve better margins at low tariffs. While more renewable energy companies are expected to take the IPO route, the fate of the ones already filed is yet to be seen. Green bonds, however, have shown some degree of success, prompting more institutions to raise capital through bond issues.

With targets already in sight and financial requirements charted out, it now remains to be seen whether access to low-cost capital will be unlocked or Indian developers will continue to struggle with high interest rates amid a low margin atmosphere.